“It’s not like it used to be in the old days” is one of those often heard, unfortunate sayings in angling circles. It’s along the lines of “You should’ve been here yesterday”, suggesting that no matter what day you turn up, the location and target species are never going to be what they used to be.  No matter what age you are, you have surely heard the stores and seen the photos of captures that seemingly defy belief in this present day and age. But with good fisheries management, productive stocking and habitat development/protection, some species/locations are bucking this trend.

Look at the proliferation of southern bluefin tuna along the Victorian coast, the development of impoundment fishing for cod and yellowbelly, and the improvement free zones are having in some locations (for example the barra and threadfin in the Fitzroy River) as examples of fisheries that have improved or didn’t exist in the past.  Estuary perch in Victoria are another species that seem to be bucking the trend of declining captures for a number of reasons. A combination of improved tackle technology, new breeding and stocking programs and changing attitudes to catch and release are all helping bring, or keep, EP at the forefront of angling options. 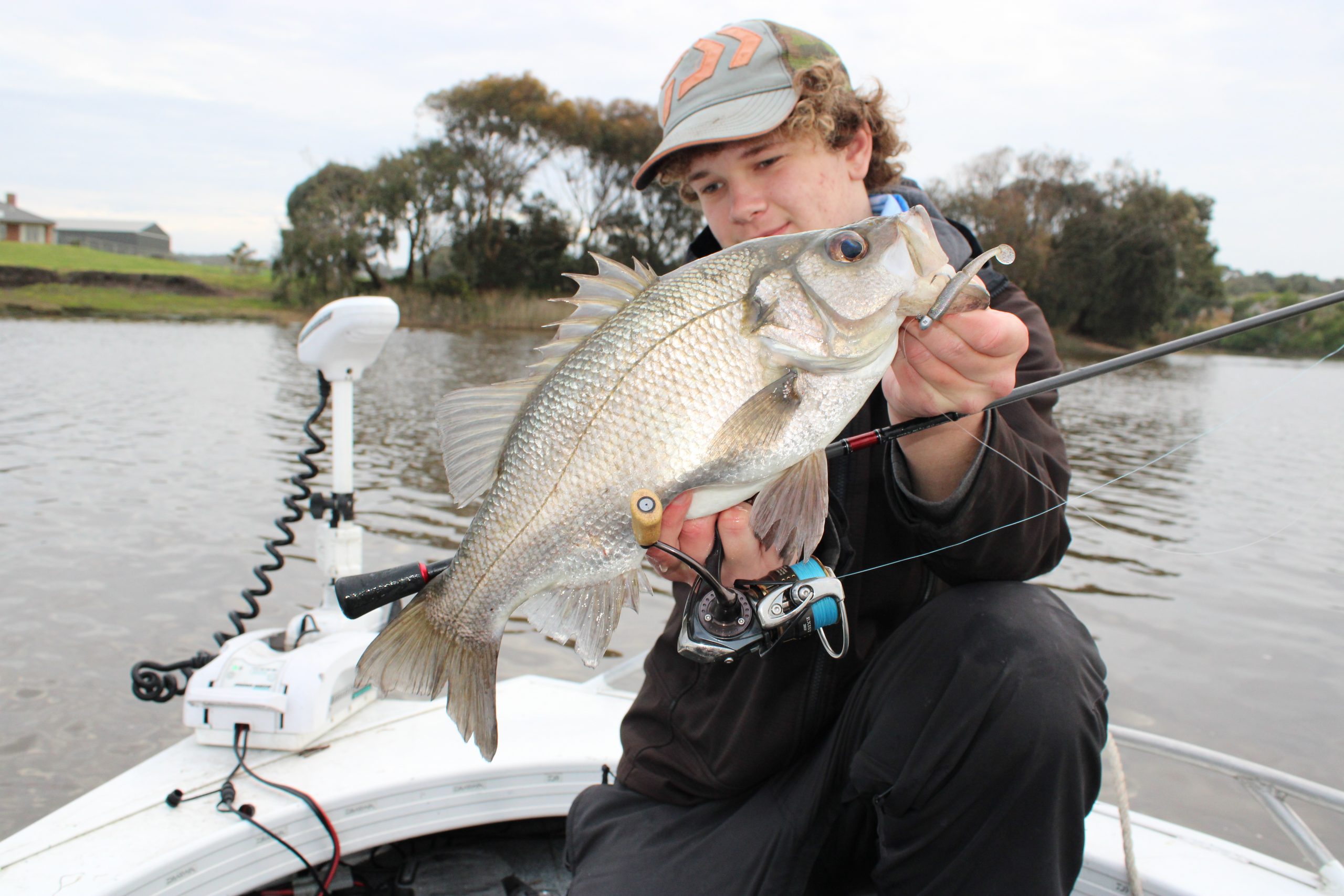 Bait fishing for bream as a teenager in the early 80s, we rarely encountered estuary perch – despite the old timers saying, “There’s as many of them in the rivers as bream.” Perch were noted nocturnal feeders, and we caught them on lures at night, but as the years went on we began to catch them on lures at other times. The technique was simple, using mono-lined trout outfits and mainly old school Rapala jerkbaits to target the fish, but it proved productive – even catching the odd bream, which was special and unusual at the time.  As the years passed, braided line, soft plastics, electric motors, more small lures now than you can poke a stick at, super sounders and so on were all improvements (that we take for granted now) that made catching EP not just a party trick, but a regular and common angling target for the masses.

Fortunately, despite this increased effort and improved technology, most avid lure anglers are also well versed in the need to conserve fish stocks. Most keen and effective EP lure anglers release most, if not all, the fish they take. Anglers who target perch can be important cogs in keeping their local estuary perch locations viable. Anglers can be vigilant about unsavoury or illegal practices that may hinder the ability of future generations to enjoy pursuing estuary perch.  These days you are far more likely to encounter a like-minded lure caster along an EP river, rather than someone with a white bucket full of fish, or stumble across an illegal net.

There is nothing wrong with getting a feed of fish but there are a lot of easier targets that have far less impact on the species as a whole. Whether it’s spawning season or not, estuary or freshwater, large perch (40cm-plus) are most likely to be female and need looking after. Much has been written about correct handling techniques such as supporting the fish’s weight from underneath, and these techniques need to be applied when releasing perch. Despite their name, estuary perch spend much of their time in freshwater. Being a euryhaline fish (like bass and barramundi), estuary perch are able to function across a wide range of salinities, from saltwater estuaries to freshwater regions. This is an important aspect of their migration pattern, which necessitates them to travel downstream from the freshwater to spawn in the estuaries.

The perch’s tendency to travel in large groups of similar size on their journey to and from the spawning grounds can result in brood stock being affected by overfishing, or even worse, someone stringing an illegal net across the areas. Stumbling across a concentration of large perch (most likely females) and taking a bag limit could have a severely detrimental effect on the perch population, particularly in the smaller systems. As stated previously, changing attitudes to perch and fisheries management such as reviewing bag limits has helped the species maintain or recover in some areas.

EP are also receiving a helping hand through breeding and stocking programs. A mystery for years, the breeding code was finally cracked and wheels were placed in motion to start a restocking program.  For around a decade now Fisheries Victoria has been accessing brood stock though the annual ‘perch search’, where line-caught fish are flown to a hatchery in southern NSW. Here they are bred and the fingerlings restocked in both areas where fish have been present and/or declined, as well as new locations (including some small freshwater impoundments.) Being a slow-growing species it has been a slow burn, but results are definitely beginning to show. Not only are new developing EP fisheries exciting, it also takes the pressure off traditional strongholds of the species. So despite the EP becoming more of a target species for keen lure anglers in the past two decades, these positives I’ve mentioned seem to help the species in coping with the extra pressure they are encountering. 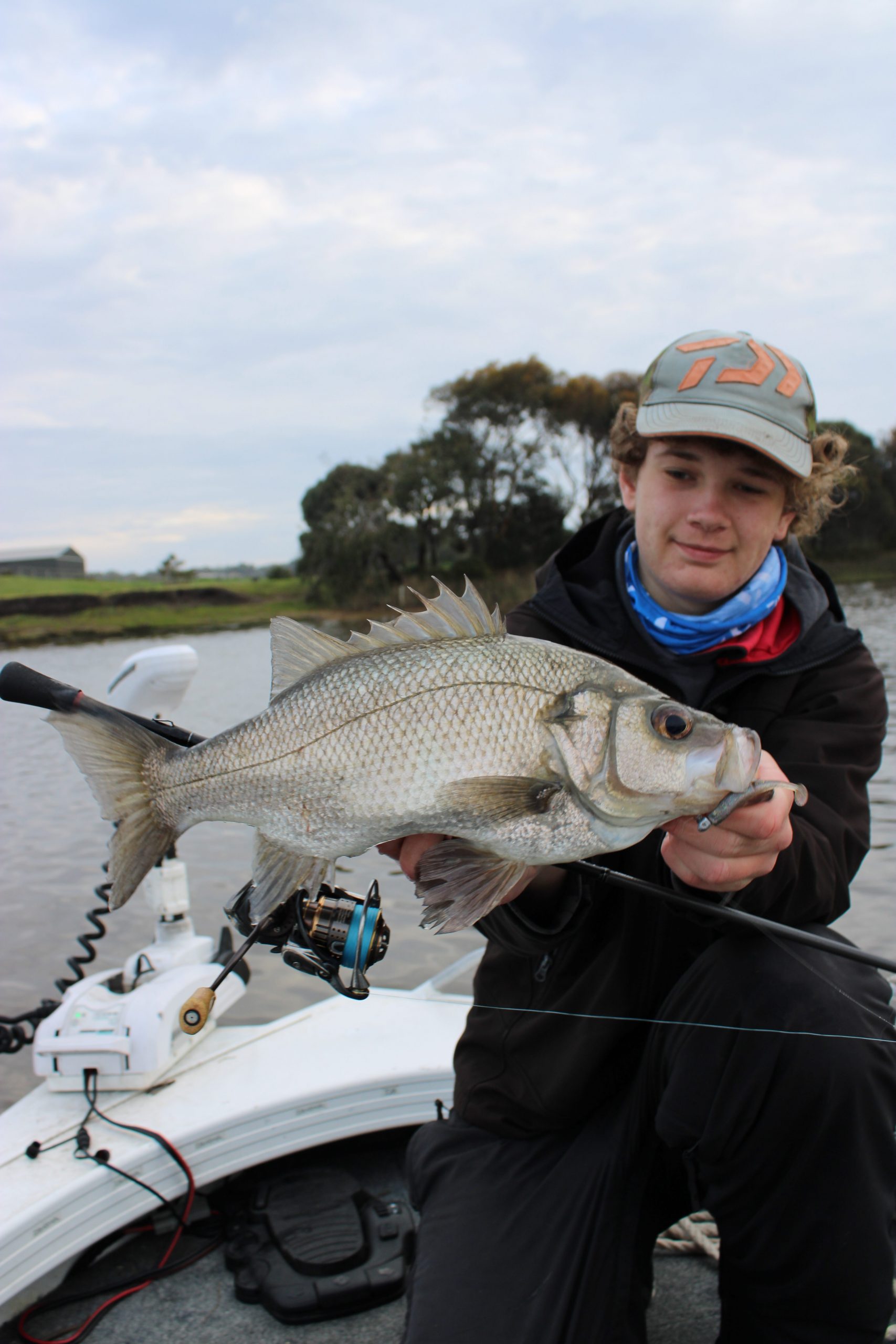 Does all this good news make you keen to target some estuary perch? Well late autumn is a good time to have a go at them. Let’s look at a couple of techniques that work well this time of year.

When you think of estuary surface luring, one usually thinks of the warmer months, and a warm, calm, summer’s evening is an excellent time to target EP on the surface.  However, as the days get shorter and the weather cools, EP will still happily crash a surface lure.  Just as it was 20-plus years ago, a floating 7cm Rapala in MN colour, twitched slowly along the surface, is still a deadly surface technique. But now there are a host of surface lures and techniques that EP love as well. The bent minnow style of lure is the modern equivalent of how we used to fish the old Rapala – pulled down slightly and then allowed to slowly rise to ‘kiss’ the surface… then twitched down again, then rise back to the water’s surface again. It’s a subtle technique that suddenly become unsubtle when the lure gets destroyed in a big EP surface detonation.

Other more subtle surface techniques, such as surface walking a Daiwa Slippery Dog or an Ecogear pink grub soft plastic, always seem to work better than the more aggressive cup-shaped poppers.  The other extreme though, is working winged cicada-style lures that do make a significant surface disturbance. At times the perch love this style of surface activity and experiencing the detonations when 40cm-plus of EP eats one of these lures is worth waiting for. Small Megabass Sigletts work well for this technique as they mimic the cicadas and black crickets that perch feed on at this time of year.

We will target EP on the surface right up until the water turns brown with winter floods.  Even when this happens, and all the bream and mulloway are hunkering down deep in the saline salt wedge below the fresh, EP can still be found feeding in the shallows. As stated before, due to their ability to easily cope with a range of salinities, one can still find a productive shallow bite at a time when you would think you need to fish deeper, more saline areas. 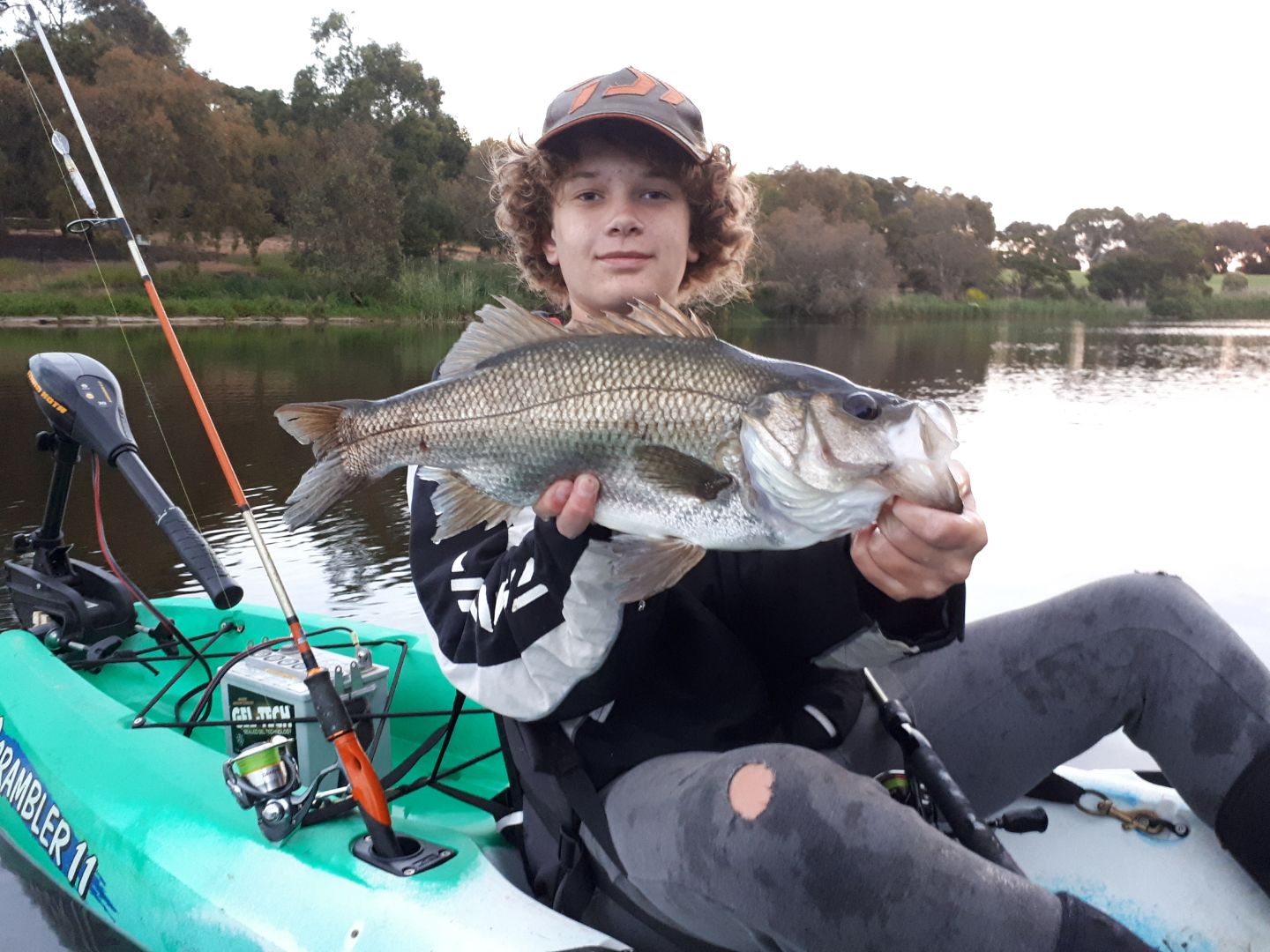 Jerkbaits such as the Daiwa Presso 6cm fished close to weed beds can provide some exciting action at a time when most are targeting fish in the deeper parts of the river.  EP are also an excellent target for fly fishermen. Years ago, in the days before soft plastics, we would pull out the fly rod if the perch weren’t committing to hard-bodied lures.  The advent of myriad soft plastics, and the hardware to fish them, has really put my fly-fishing on the back burner. Soft plastics are a very efficient way of targeting EP and can be easily fished throughout the entire water column, making finding the fish an easier task. Fishing during May, you could encounter fish from the edges/surface to those fish beginning to school up in the deeper sections, so the use of soft plastics is a productive way to cover the water. There are a mass of different soft plastics around today and, fished properly, virtually any small minnow or grub style in 2-3 inches will entice a strike from a perch. Daiwa Bait Junkie minnows in the pearl gudgeon colour look awesome in our local waters and the perch seem to agree.

Trolling is another technique that EP respond well to and is a good searching tool when trying to find fish, or fishing a new location.  Their propensity to hang midwater and not as close to the bottom as bream makes them an easier trolling target. Cruising along on the electric motor, monitoring your sounder, with a couple of diving lures out the back like a Daiwa Double Clutch, Steeze Shad or Spike is a very effective way of not only locating fish, but putting a few in the boat as well. All the above mentioned techniques for EP can be fished for with traditional bream or trout-style spin outfits. However in some situations a longer rod (7ft to 7ft 3in) with a fairly solid action helps. Imparting action on a surface lure, taking up slack line quickly, reaching weed beds on the opposite bank, and keeping a big EP’s head up and out of unseen underwater snags or bankside weed beds are all times when such a rod works well. Another point of difference is beefing leaders up to around 8-12lb if you are fishing into or near any heavy structure, as a 40cm-plus EP will soon have you buried back in that structure if you are fishing too light. In open waters, the more usual 4-6lb bream-style leaders are fine.

So that’s a few techniques and some good news to get you excited about tackling some estuary perch this autumn. Researchers believe that EPs stocked into freshwater impoundments have the ability to grow to greater proportions than Australian bass. So let’s hope the story of the estuary perch is one that continues to grow and develop in a positive trajectory, and rather than being one of those species that we can only tell the grandkids about, we can instead go out and ‘smack a few on top-water’ with them.