Victorian anglers can all rejoice as the epic yellowtail kingfish fishery is healthy and here to stay.

Yellowtail kingfish – Seriola lalandi – are found all around the world in temperate ocean waters. In Australia they range from north Queensland, right across the bottom of Australia, and as far up the west coast as Shark Bay. Victoria is perhaps not as well endowed with kingfish as some states, but there are significant populations distributed along the Victorian coast line. These fish are coming under ever-increasing attention by sports-minded anglers looking to experience the power of the kingfish.

Yellowtail kingfish are one of the ocean’s great fighters, with the ability to power towards structure at the drop of a hat, or continue the battle way past what you would think is reasonable for a fish of its size. Yellowtail kings are a fairly fast-growing species that mature around two years of age, when they are about 50-70cm in length. These smaller kingfish are often referred to as “rats”, and while still great fun on light gear, it is the larger kingfish that really get anglers’ arms twitching. Kings in the 6-9kg bracket are magnificent sport fish and once over 10kg take some serious extraction. In this article I will look mainly at targeting these larger kings, which behave and respond differently from smaller specimens. In Victoria many anglers make the long pilgrimage to Portland each summer in pursuit of kingfish. Certainly some are successful, but many return unfulfilled. As anglers explore far and wide, with improved technology and quality tackle, more and more destinations seem to be turning up kingfish around the state.  Mallacoota, Marlo, Waratah Bay, Wilsons Prom, The Rip, Black Rock, Port Fairy and even Melbourne’s docklands have all turned on good kingfish recently. Don’t be blinkered into feeling you have to follow the crowd; time spent on the water is often better than time spent on the road. Following fishing reports can help, but this usually results in you arriving after the bite has been shut down. Be proactive and try to find fish before the masses descend.  Once at your chosen location, again, don’t be a sheep and hang round the flock. Try to avoid crowds and get away from other boats and you are more likely to find fish conducive to capture, rather than those that have been spooked by constant boat traffic. Of course if you see boats hooked up, be respectful and give them plenty of distance; circling them like seagulls around a pilchard trail will only see everyone miss out.

Catching kings isn’t like chasing snapper. There are many variables standing in your way and plenty of dedication is required. Like no other fish species, if conditions aren’t good there is a minimal chance of being successful. The peak season for targeting kingfish in Victoria is from late December through to late March.  Ideal conditions involve warm to hot days with flat, glassy seas and minimal swell and wind. Add a light cloud cover, or fish around dusk and dawn, and you have the meteorological ingredients for possible yellowtail success. Now those of you who are familiar with a Victorian summer will realise, this can be rather difficult to predict. You can go days, even weeks, without these conditions occurring. Coinciding your available fishing time with good conditions can be a difficult proposition.  Another problem is that the ideal weather for targeting kingfish is also great for other forms of angling, snorkelling and diving, barbecues with mates and days at the beach with the family! Once you’ve missed out on a few of these opportunities because of unsuccessful kingfish excursions it can be hard to maintain the faith. Often one or two of the above conditions may be in place but a heavy swell, howling northerly or strong south-easterly sea breeze may put paid to all your best-laid plans. Water temperature is also a major issue in determining kingfish success. The previously mentioned weather conditions may be in place but if a current of cold water, or previous days of poor weather, has dropped the water temperature considerably any kingfish present may develop severe lockjaw. The coldest water I’ve had success in was 16 degrees but 18-20 degrees is a more reliable starting point. 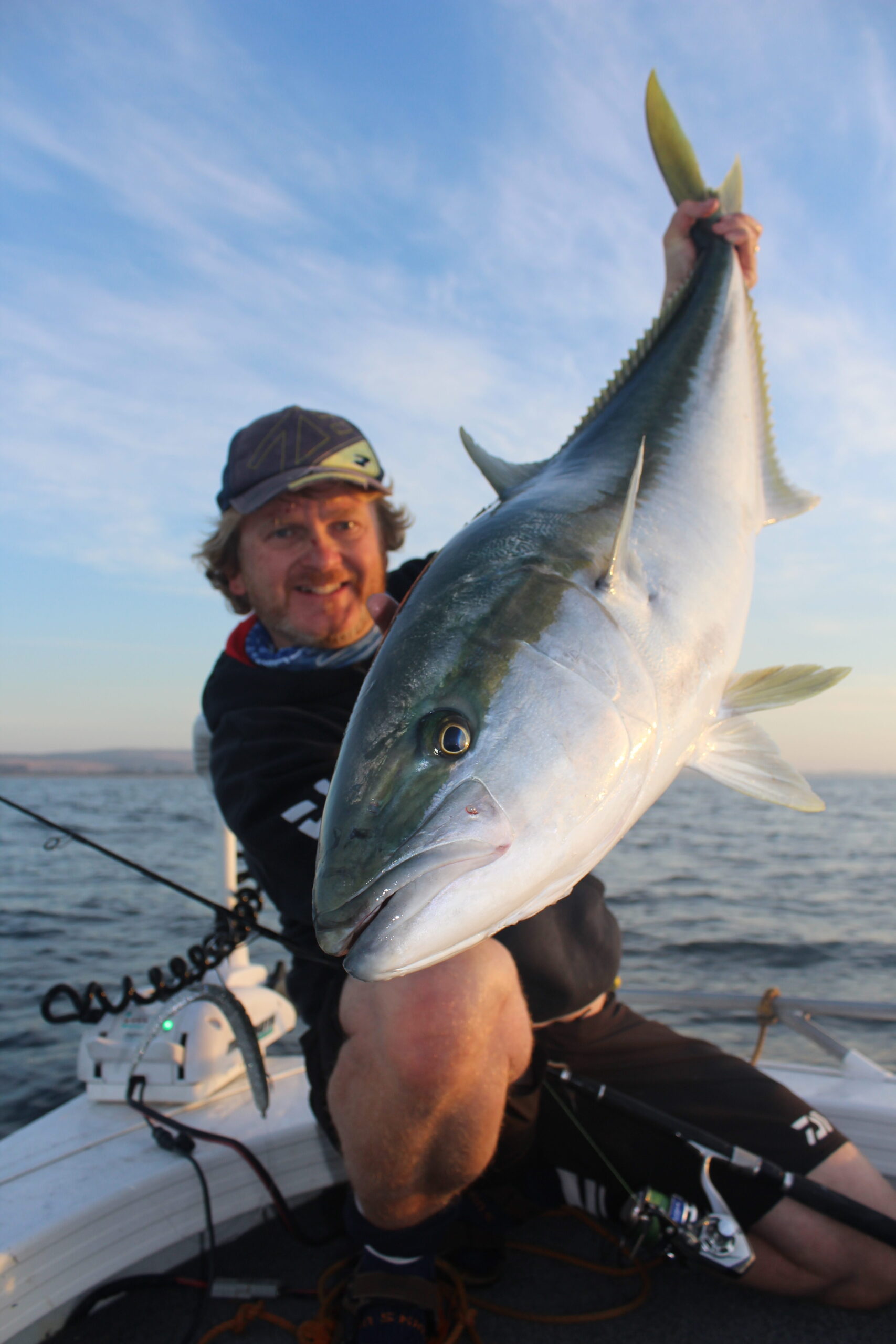 So you’ve done the hard yards and managed to locate some kingfish – how do you go about catching them? Perhaps more so than any other species, they are a fish that requires you specifically target them as the techniques and tackle required for most species rarely cuts it on kings, particularly big ones.  Any incidental hook-ups on kingfish usually result in the unfortunate under-gunned angler just having another bad luck story to tell his mates. All the following techniques described need to be backed up by quality, well-maintained equipment to withstand the punishment delivered by 10kg-plus kings.

Casting:  There are basically three types of surface lures that are successful for kings: poppers, stickbaits and soft plastic slugs. Poppers can be a great searching tool. When your popper gets monstered in a shower of surface spray by an unseen king you’d better hope your heart is in good nick. Use a popper that makes a significant splash as it can help draw unseen kings to the surface. Even if these fish refuse to take the popper, another more subtle offering can be offered to the now-located fish.  Casting surface soft plastic slugs is perhaps the hardest work of the three as it requires a fast retrieve to get the lure to skip along the surface imitating a fleeing garfish. If fish have been sighted a soft plastic slug can be cast over then cranked through the school, often resulting in the awesome sight of multiple fish climbing over the top of each other to eat it.  The use of a stickbait falls between the two for the amount of vigorous effort the angler needs to apply. Once again it works best once fish have been located as it is far more subtle, lacking the drawing power of a popper.  Some days, if they don’t want the commotion of a popper or the blinding speed of a surface slug, kings  will succumb to the allure of a stickbait slowly doing that side-to-side dance in front of their nose. The sub-surface soft plastic/jig head style of luring seems to work quite well on the smaller specimens but the big fish do seem to love the commotion of a surface presentation. 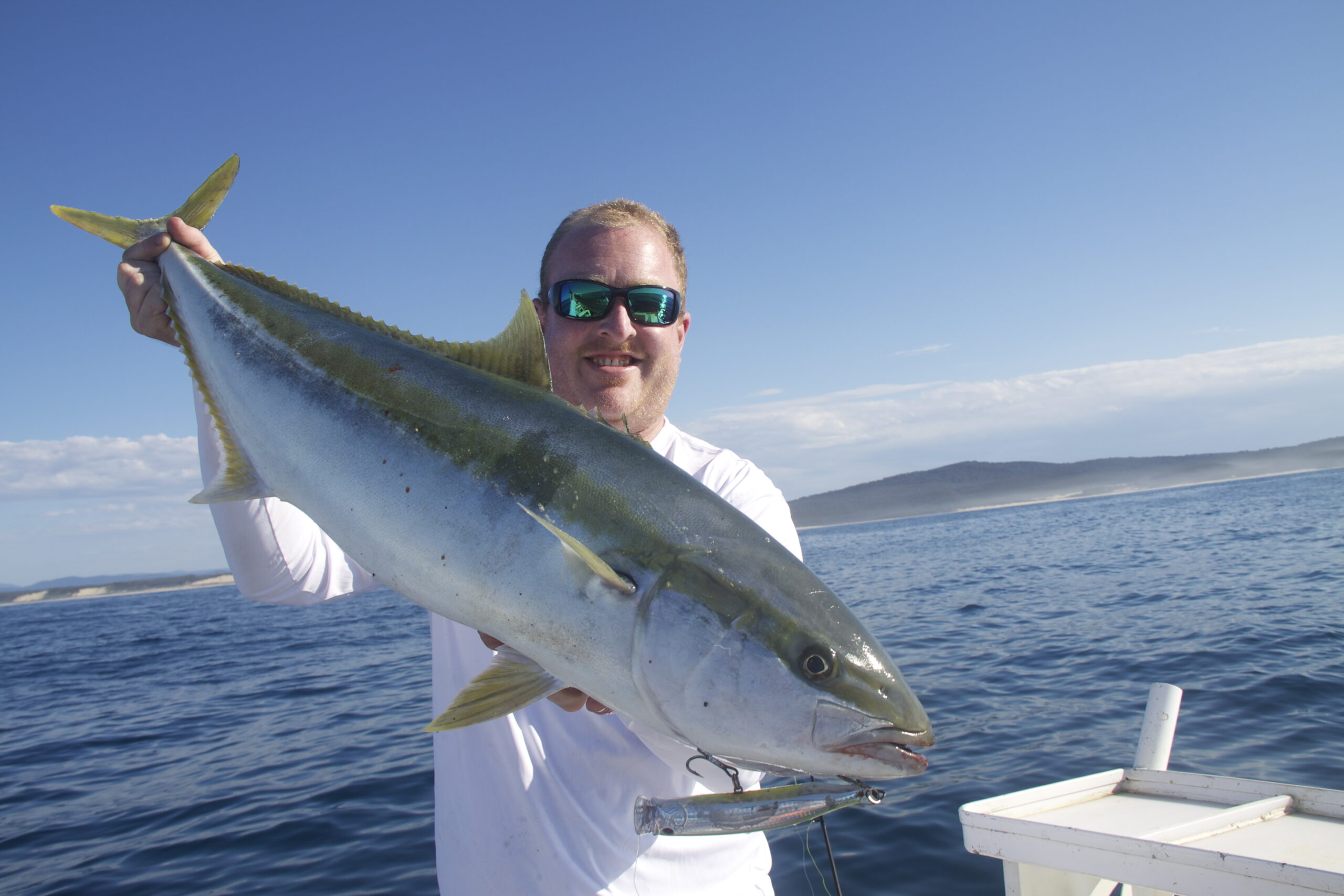 Trolling:   As with most species of pelagic fish, trolling is a popular way of targeting kingfish. The major advantage of trolling is that you cover lots of ground. Like any pelagic, kingfish – particularly in large numbers – can turn on a frenetic bite where just about anything thrown at them will draw a response. Most times, however, they can be pretty choosy about what they eat and how they go about it. You hear of the odd fish being taken on all manner of trolling lures but skirted lures, in combination with strip baits, are the most popular way of enticing a king to bite when trolling. The skirt helps keep the strip bait from spinning as well as providing a bit of extra flash and bubble. The smell of the fresh strip bait behind the bubble and flash of the skirt is the deal clincher.

Rather than the more traditional way of trolling for pelagics behind an outboard motor, a far more productive method has been to tow live baits under electric power. If conditions allow, a live bait trolled silently out the back is a great way of covering the ground, although not as quickly, in search of a king. Popular live baits can include squid, salmon, yellowtail scad and trevally. Add a downrigger to the equation in deeper water. At the front of the boat anglers can cast large surface lures in the hope of enticing a fish as well. 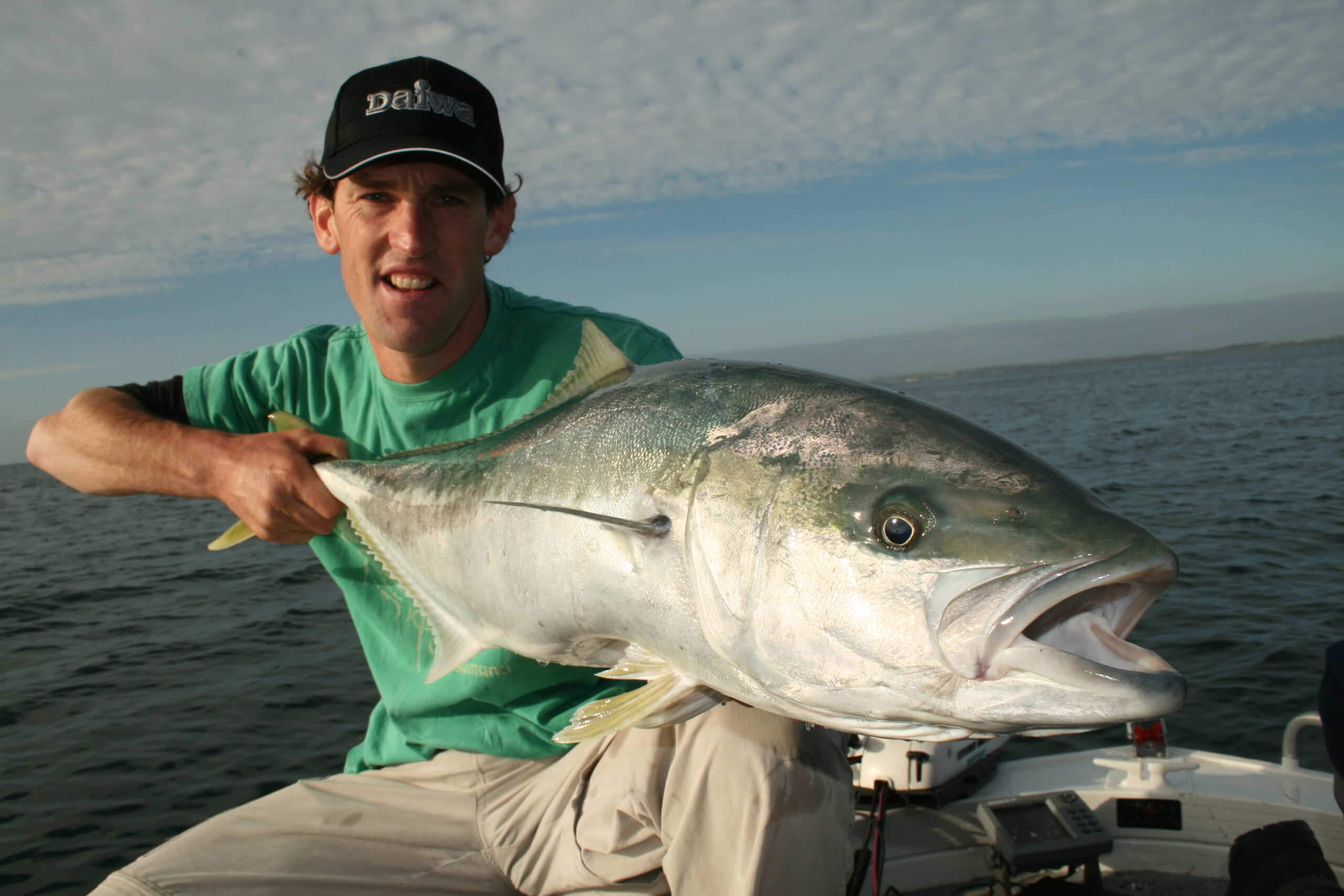 Live baiting: Live baiting involves anchoring in a likely area, usually by the drop-off of a reef or pinnacle. A large, live or fresh bait is usually then drifted out under a balloon or float, usually in conjunction with a light berley trail. Many kings are taken this way and it also provides the opportunity to fill your bag with other desirable species such as snapper, King George whiting or trevally while you wait for Mr Yellowtail to come along.

As if it isn’t enough that kingfish fight hard and look awesome, they are also good to eat. Yellowtail kingfish has white, firm flesh and is renowned for its high level of Omega 3 and other beneficial fatty acids. Problems that exist in warmer areas of their distribution, such as parasites and a disease that causes the flesh to turn soft and milky when cooked, appear non-existent in Victorian waters. Victoria has a bag limit of five yellowtail kingfish per person and a minimum size of 60cm. Particularly if they are large fish, five is a generous limit. One big king has plenty of meat on it, so please carefully release any you don’t require so someone else might enjoy the exhilarating battle you’ve just enjoyed. We generally use large soft-meshed landing nets to land kings anyway so this helps if you intend to release one. 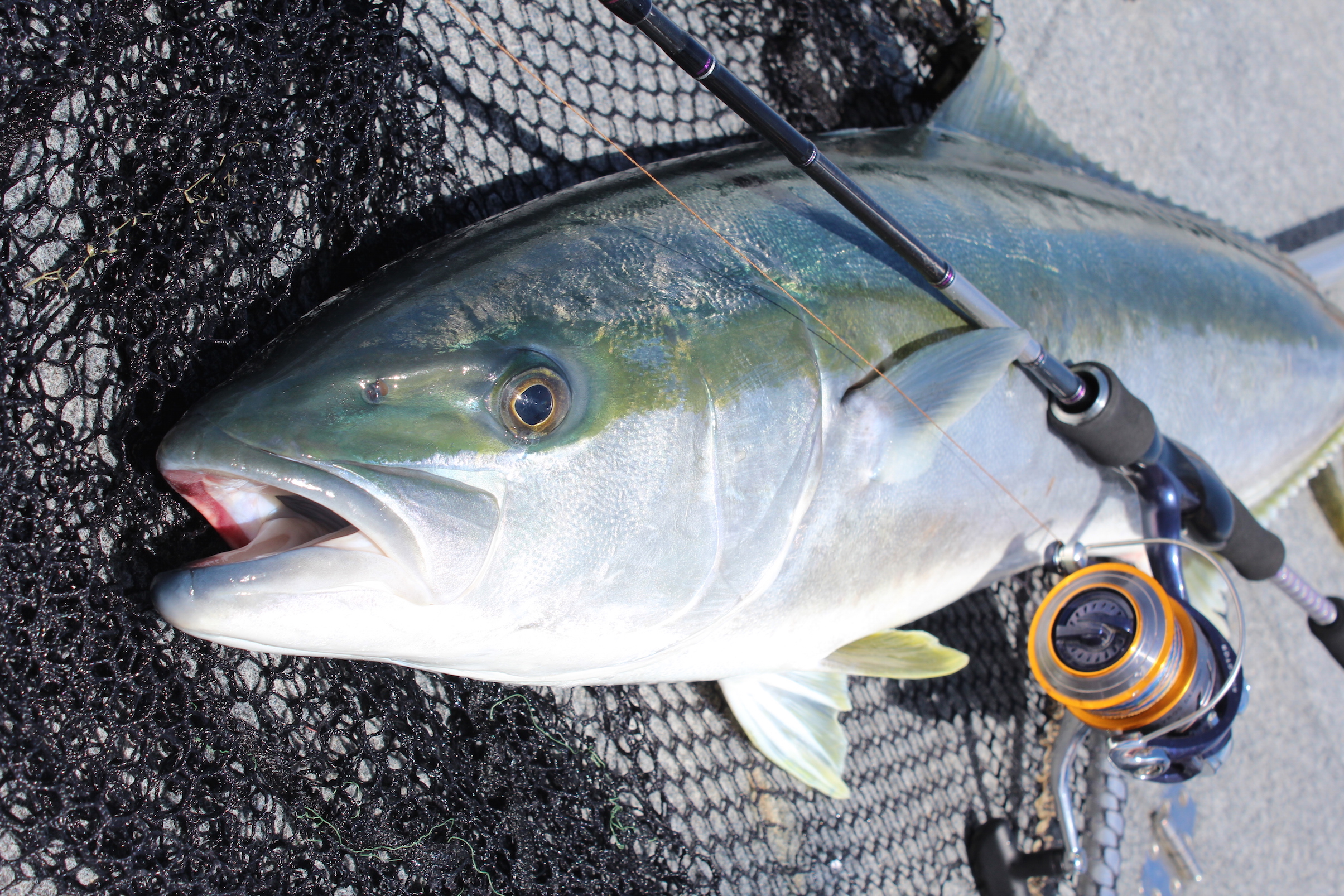