I recently had the chance to test out one of the bigger engines in the Yamaha stable, the F225 four-stroke. The 225 seems to be the magic number for a lot of trailerable boats that sit in that 6-7 metre range and the Yamaha does it very well.

The Yamaha F225 is a V6 3.3-litre engine that boasts a huge 4.2-litre displacement that is far larger then any of its 225 competitors. The F225 is the smallest of the three big Yamaha Offshore Series engines and has been designed to push along big boats in the rough stuff.

Its huge displacement is attributed to some very exclusive Yamaha tech via a thermally applied plasma fusion process on the cylinder walls – a feature that you’re more likely to come across in a high-performance sports car than an outboard.

There are no conventional steel cylinder sleeves and this plasma fusion process is 60 per cent harder than steel. This larger sleeveless cylinder allows for larger-cylinder bores, which create increased displacement, providing more power and more torque. Best of all, these advancements don’t come with the compromise of excess size or weight. The F225 is the same size yet lighter than most other 225-horsepower engines. With a 253-kilo dry weight, the F225 is one of the lightest and most powerful in its class. 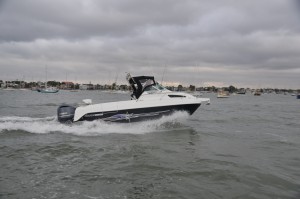 The F225 I tested was bolted on the back of a Haines Hunter 675 Offshore. The 675 is a big, heavy boat with a deep vee that needs some tough ponies on the back to get it up and moving. At the helm everything was comfortably Yamaha. Three large square gauges provide a functional and intelligently laid-out reading of the engine’s speed, fuel data, trim and tacho. I really do love the Yamaha square gauge system. While it may seem old compared with Yamaha’s latest and modern digital Command Link LCD screens, I find it’s easy to see, operate and adjust, even while running at speed.

Standard cable throttles with hydraulic steering were fitted with the test vessel, which made for easy and controlled steering and handling. Laying down the throttles showed excellent hole shot, with the boat getting on the plane with ease and very quickly. Once the boat was on the plane there was that familiar tune of a Yamaha four-stroke. I don’t know if Yamaha are the quietest engines of all the four-strokes (although they are very quiet), but they certainly have the best pitch to their sound. It’s never whiny or too throaty and it always sounds pleasantly powerful. Anyone who has spent time with Yams and other engines will know what I’m referring to. While many may feel the sound of an engine is irrelevant, I promise that on a long run or on multiple runs in a day, you’ll appreciate an engine that has a sound that doesn’t make you want to sink it.

With the boat on the plane I set the engine to wide-open throttle in the calm conditions of a harboured bay and quickly reached a top speed of 81km/h at 6000 revs. The engine was highly responsive to sharp, quick turns and the low-range throttle response was excellent as we gave the boat all we could in the handling department.

Leaving the shelter of the bay and heading out into some very sloppy conditions with waves of just under a metre, the Yamaha showed its mid-range throttle response to be outstanding as I tried my best to find some sort of timing in the erratic waves and slop of a rough Port Phillip Bay. 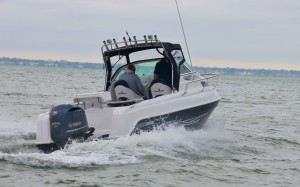 Testing a Yamaha always seems a somewhat reassuring exercise. I have spent countless hours in boats fitted with Yamahas and I never expect to find anything negative with their products. They’re a very durable product that just seem to keep on going no matter how many hours you’re stacking up. This F225 was no different; it’s a high-class piece of machinery that sounds great, has the power where it counts and is silky smooth in all aspects of its operation. If you’re looking to repower or purchase a new boat and an engine in the 225 size range is what you’re after, you’d be doing yourself an injustice to not seriously consider the Yamaha.