The colder months are viewed as a fairly miserable time by many anglers but the reality is it can be a very misunderstood period. No matter where your chosen angling destination is, it always pays to keep your finger firmly on the pulse and be that angler who can quickly adapt to the different scenarios that may present themselves.

Observations and intelligent thought about fish behaviour and where they are most likely to be is a skill developed from one thing only, and that is time on the water. This is this is especially true of manmade environments or impoundments as curve balls are continually thrown and we often find ourselves struggling with changing elements. Surface fishing is a form of lure casting that is almost written off by the majority of anglers during the cooler months but winter can often see fantastic results and red-hot sessions that may leave you in disbelief. 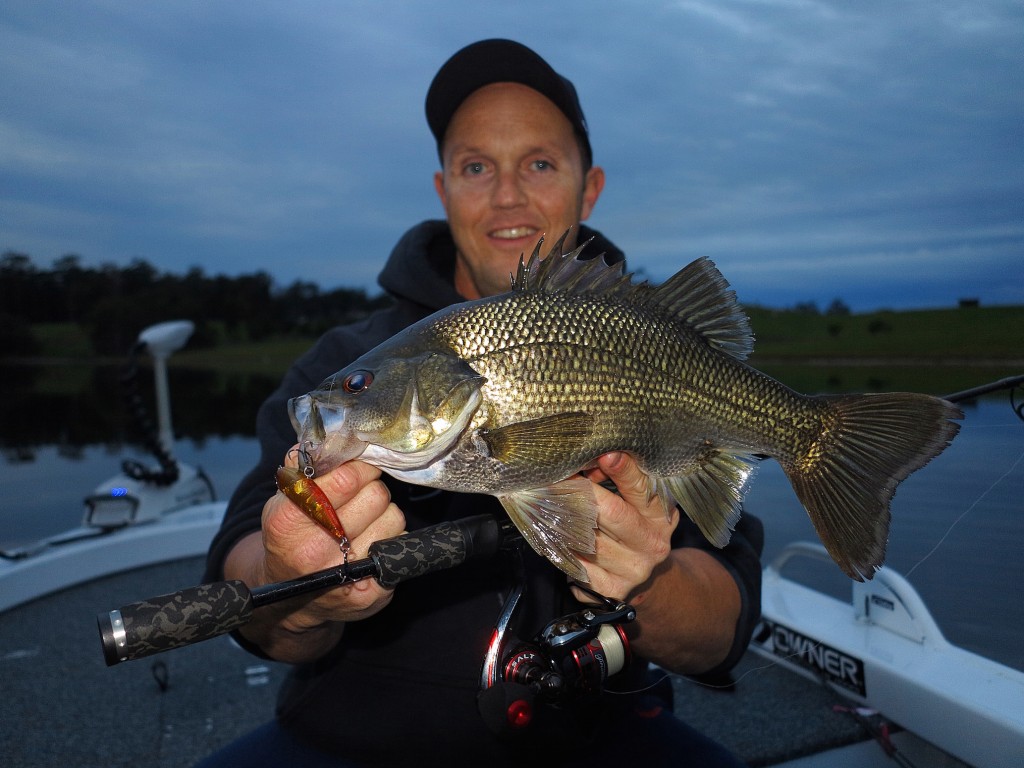 Tackling Early Spring
It is well known (and with good reason) that the winter period remains a closed season for our wild bass fisheries as the fish migrate and commence their annual spawning run. Our freshwater impoundments, however, remain open to recreational anglers as the stocked Australian bass are unable to spawn throughout these waterways due to unfavourable conditions and overall salinity levels.
Throughout winter the call of nature remains strong, however, and as the fish form tight schools in what is a futile attempt to breed, they can become far easier to locate. Our fairly incredible modern-day sounders often light up with ‘shows’ and readings we all dream about, with countless numbers of schooling fish. It is understandable why many anglers become fixated on these schooling fish but they can often be severely frustrating as they refuse absolutely everything you throw. While you stare at your sounder in disbelief, all that results is a trip back to the ramp without even a single run on the board.
The great news is that it’s not all about schooled fish and some logical thought will often have you discovering fish in other areas. As a result you can gain a great understanding why these fish are where they are.

Surface lures in the cooler months
During the cold of winter and the start of spring, the attractions for fish to move up and into the shallower bays and edges are rather obvious if you apply a relatively simple thought process. The first attraction is a genuine level of comfort that is immediately offered by the warmer water. A further attraction is the plentiful supply of food and, much like the bass themselves, yabbies, shrimp and smaller fish such as gudgeon and bony bream will also move into these shallower sections for the same reasons. As another bonus these sections are often home to thick vegetation, such as vast expanses of weed beds and lily-lined edges where fish will find yet another level of comfort. These forms of vegetation provide protection for bass and the fish are quite at home amongst the often very thick weed. By putting these pieces of the puzzle together you begin to understand why many fish break away from the larger schools and head for the comfort of the shallows.

Time of day is another critical factor, which again is often overlooked. The mornings will quite often see a very cool start with temperatures as low as, say, 5C, even throughout parts of South-East Queensland. This means that the afternoons can fish far better as the heat of the day slowly warms the shallower sections and surrounding edges. Afternoon bites where fish smash surface lures can be common and the fish still seem to retain that high level of aggression as they hit lures with real purpose. In a complete reversal of this scenario, during the summer months the morning period will often fish far better. With favourable early morning temperatures the fish will lurk in the shallows with the intention to feed; however, as the sun climbs high and the mercury begins to soar, the fish will retreat to cooler sections of the dam. 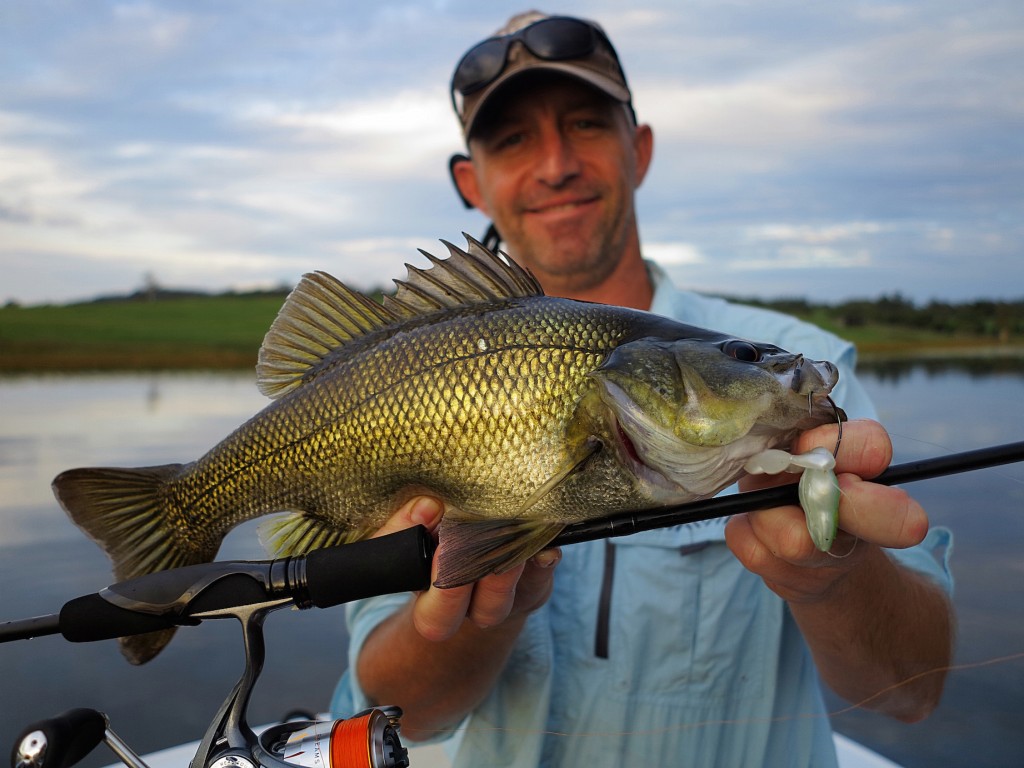 Your lure casting approach
To begin with, it must be emphasised that you are focusing on shallow sections that may be shallower arms coming off the main basin or smaller bays and edges. Water can often be as little as 0.5-2m deep and your approach must be silent with a considerable amount of stealth. Charging into an area using your outboard and creating a large wake is not something you desire here, and a slow, quiet approach with your electric motor is an absolute must.
You may well be drifting down one single lily or weed-lined edge, or possibly a small arm section where you can cast at both sides. In the ‘small bay’ scenarios you will often find very shallow water and within these areas you can catch a fish almost anywhere provided the bottom features vegetation. In many instances I have witnessed fish rise and smash the surface and subsequently caught fish in what you would consider the middle of nowhere. What may look nothing to you can be a very different story below the water’s surface. If you are amongst weed beds, the fish will also be here and will take the opportunity to feed if a situation presents itself. The point here is that you can cast both the edges and everywhere else in between where depth and vegetation is favourable. 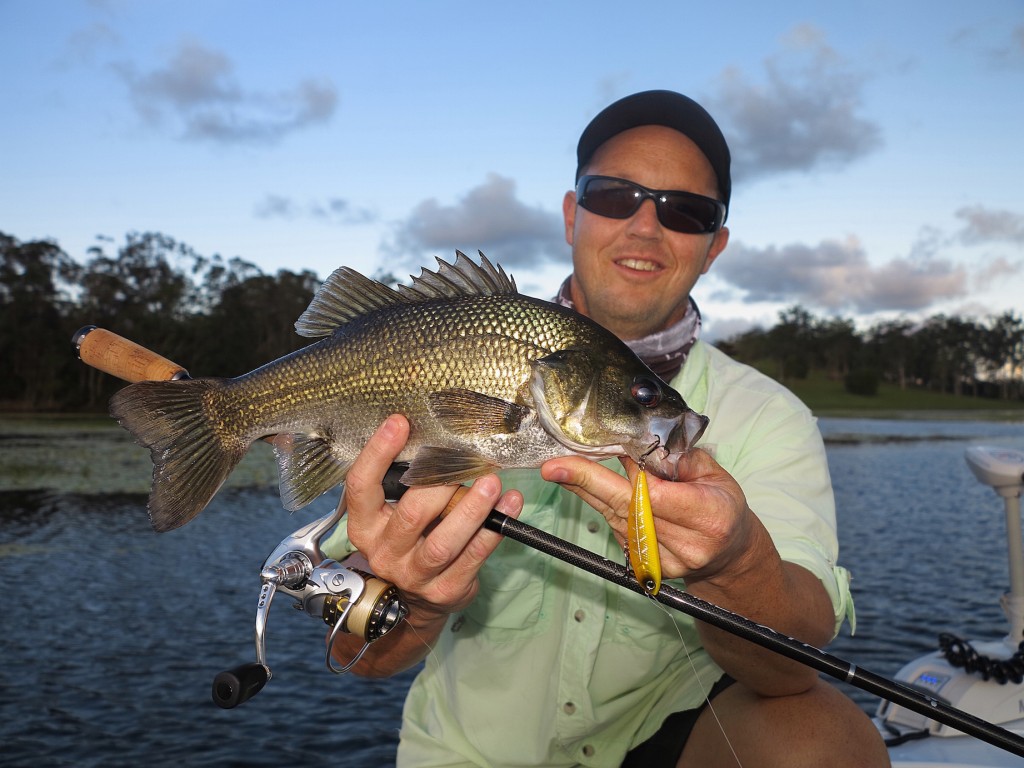 Lure selection
Today’s lure market can only be described as gargantuan, and within the surface lure department your choice is little short of massive. There are lures that replicate everything from insects to amphibians with an excellent line-up of surface poppers, surface-walking stickbaits and soft plastics rigged specifically to walk the surface. Let me immediately say that the vast majority are effective when worked correctly and anglers often develop personal favourites, which stems largely from success. While I have enjoyed success on just about every type of surface lure, my clear preference is always for a surface-walking stickbait in the 65-70mm range. The reason behind this is that you are able to achieve actions and darting-like movements from these lures that can be made to look so realistic they are a thrill to watch. If you are dealing with fish that are on the more cautious side, surface-walking stickbaits will nearly always be the undoing of the more reluctant ones.

A slow, silent and darting walk along the surface while incorporating pause phases will either prompt an aggressive smash on the surface or a huge boil below when you have had a serious ‘looker’.
Surface poppers can also be a deadly presentation and if you are one of the many anglers who prefer poppers, the best approach is to work them rather slowly and not overly aggressively. In fact, many poppers can often be worked much like a stickbait where you are able to ‘shuffle’ the presentation along the surface with a subtle ‘bloop’ while incorporating the often very necessary pause phases.

Other lure types that have really made an impact on the impoundment bass fishing scene are the many forms of frog-type soft plastics, which are rigged as weedless presentations. Two things that can be said about most of these is that they look spectacular in the water, but often result in poor hook-up rates with the upward or downward-facing single hooks. In many instances these hooks fail to find their mark, which can lead to anglers looking at alternatives. I know many anglers who have taken to running small trebles from these presentations and provided the surrounding terrain allows (in terms of vegetation), it can be a great way to go. The action does not become compromised when rigged correctly and the hook-up rate is far greater. What can most definitely be said is that these frog imitation soft plastics gain a lot of attention and are a worthwhile inclusion into any surface luring kit. 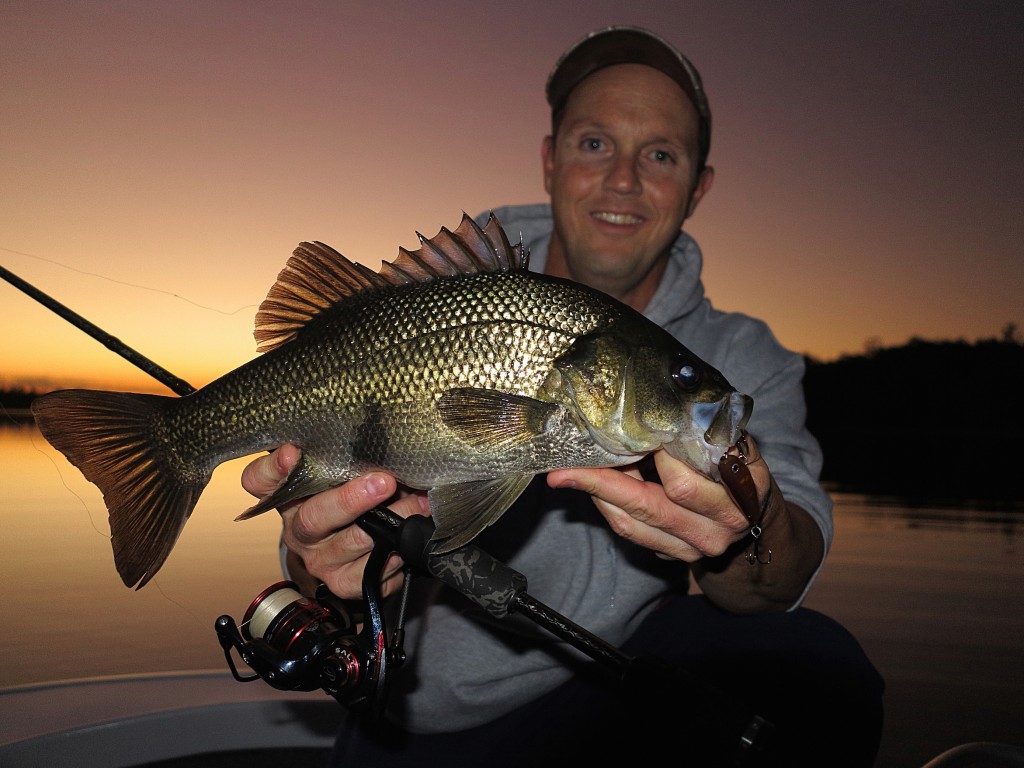 Suitable lure casting outfit
There is simply no need to complicate the area of gear selection and to be perfectly honest you will need only one outfit for all your surface lure casting endeavours. My weapon of choice is a 1-3kg, 6ft 10in long rod and balanced with a 2000-sized reel. This allows me to fire off any smaller surface lure (up to, say, 70mm) and the rather fast action offers some genuine sensitivity throughout the rod’s tip section. This sensitivity allows smaller stickbaits to be worked with ease, whereas a stiffer rod will often impede the action of many surface-walking lures.
How heavy you choose to fish in relation to line class is personal choice but I will commonly use a combination of 4lb braid and 8lb leader for this type of lure casting. You must bear in mind that given you are fishing very shallow sections, a bass can annihilate your offering and have you bricked in the weed in the blink of an eye. In general the weed is relatively kind to leaders but it is amazing how effectively a fish can throw your lure while you try to free it from thick vegetation. Going too light will result in many lost fish and in many instances fishing heavier can be the smarter choice. The best advice anyone can give you is to weigh up the terrain you find yourself fishing across and aim to find that balance between genuine fun and control.

Get moving now
With spring upon us, it is a superb time to be casting surface lures throughout our impoundments. The slightly warmer water that presents itself throughout the shallows holds the key to some wildly exciting surface explosions. Choose your locations wisely and move now before the opportunities go begging. 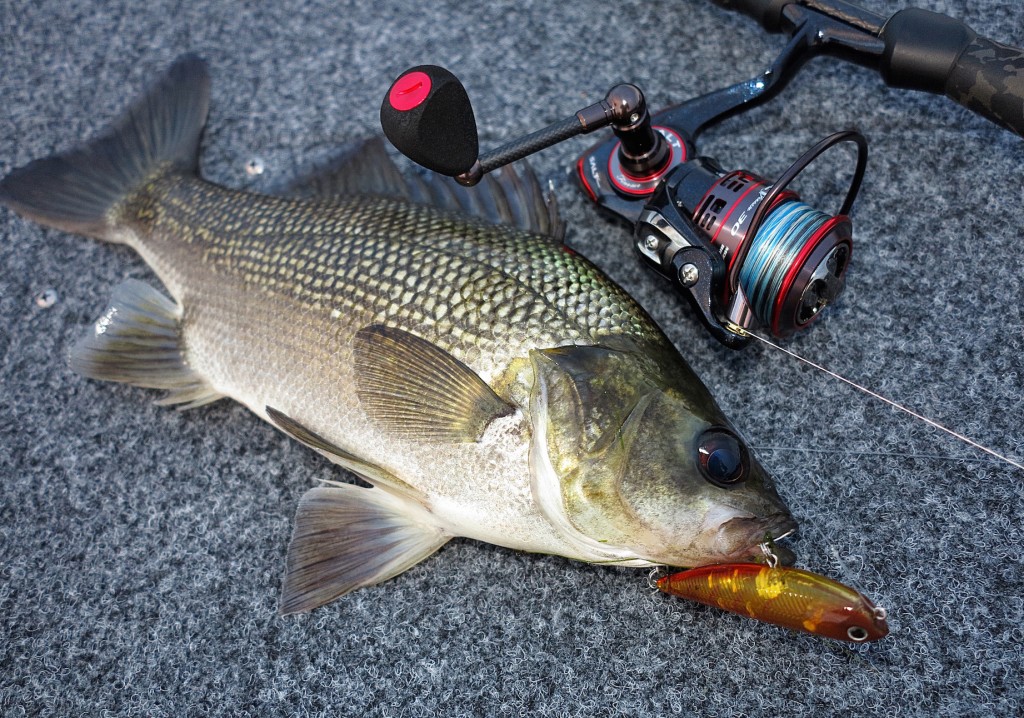