Australian Salmon In The Surf

When Australian salmon by the thousand come within reach of anglers casting from the shore on the southern coastline, mayhem begins. Every angler in an ear shot is out to get a piece of the action. It’s not hard to see why fisho’s go to extremes to chase these fish. They are a powerful sport fish which run hard, are aerial and acrobatic, have some great head shakes, run towards you and wont give up till the final moment. The whole southern coast of Australia gets the run and in some areas they are bigger and in greater numbers. Our expansive coastline is one of the most fun and sporting places to target this prolific species, read on and you will learn how to get in on this action. 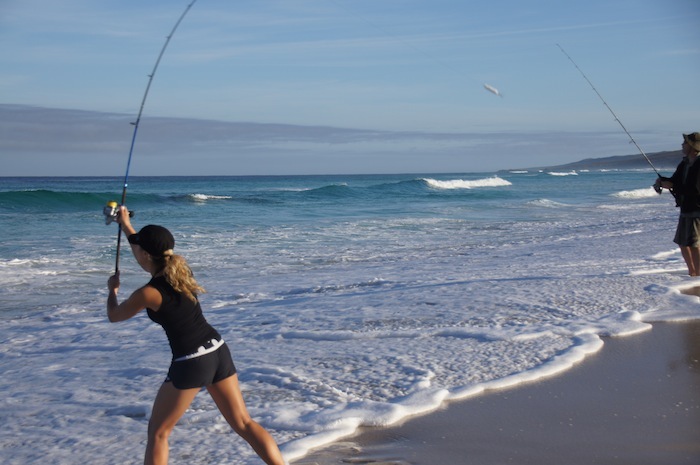 Australian salmon have always been a popular bread and butter species. They are an Iconic Australian sport fish and to many youngsters a great introduction to fishing. On top of being a family favorite they are also targeted by sports anglers due to their aggressive strikes on almost all types of lures. Salmon also pack a punch particularly with the larger specimens which will put your tackle to the test. Juveniles often known as salmon trout are also great sport for light tackle enthusiasts or a common fish to put a big smile on a junior angler. When the big seasonal schools run through the southern parts of Australia with fish in the 4kg -9kg range it attracts a lot of attention. These schools can have 20 or 30 fish or can even be kilometers wide and tend to be close to the shoreline and usually in casting distance. The annual run gets anglers from miles around to test themselves on these great fish. I am always one to get excited and tend to spend the season getting salmon on surface lures from the beach. Some sessions involve fishing the usual haunts with the crowds, which is great, as another salmon gets airborne to the cheers of everyone. On other occasions I will enjoy them on a deserted beach sight casting.  Australian salmon are common in colder waters on the Australian coastline. They tend to hang around the south coast but migrate in large numbers up the east and west coast when the water is coolest around late autumn and winter. Australian salmon are not renowned for there eating qualities which surprises me as I find them quite tasty when they are bled eaten fresh and are one of the best fish once smoked. Most would agree that the smaller juvenile fish are great eating and also great bait due to their oily fish attracting flesh.

What to look for

Salmon love to hang out in strong surf on sandy beaches. They tend to sit in deeper gutters on the shoreline awaiting smaller prey. When they are migrating they will travel up and down the surf beaches in large schools. To target salmon in the surf, finding the gutters is one of the most important skills when targeting these fish. On calmer days or beaches with low swell, all the skill is in spotting fish. Looking for dark patches in usual salmon haunts with polarized sunglasses is the go. Often silver flashes can be seen in the waves or if you’re lucky you may even see big fish resting in the shallows with their backs and pectoral fins protruding from the water. When you sight salmon, lures are the go and you may be in for a hot session. When the fish are out of sight it`s best to resort to traditional bait fishing and wait for your rod to buckle over.

Salmon are commonly caught with other great beach fish such as mulloway and gummy sharks so if you can decipher between the gutters and banks you’re in the running for a great capture. Waves only break on the shallower banks so signs of no waves breaking could be a good fishable gutter. Darker blue water in the surf also will indicate a gutter. One of the biggest mistakes fishermen make in the surf is casting too far. Many gutters can be found closer than your maximum casting so don’t be afraid to cast into gutters that are right at your feet. Salmon, big sharks and big mulloway will all reside in here. Small fish hide in close so the big fish use the gutters to feed on them. Too many times you see anglers casting as far as they can over the fish and in to the unknown which is likely to be a shallow sand bank which holds no fish!

When using bait pilchards and blue bait would be the most commonly used and no doubt has a high success rate. On most occasions they are not fussy, so bait that stays on the hook in strong surf conditions such as squid or fresh fish fillets is often better. When the big salmon are around live baits are unbeatable. Using live herring or small mullet often produces the big salmon. This type of fishing is suitable with heavy surf fishing gear such as 12ft rods and large alveys or spinning reels. It is a great relaxing way to fish when you’re waiting for that big one sitting around with friends or family on a nice beach. The best rigs used when using dead baits are a running sinker rig with three ganged hooks or a dropper loop rig with a size 4/0 circle hook and a surf popper on top. When live baiting, a single hook will suffice, and it is surprising what size bait a big salmon will swallow whole. 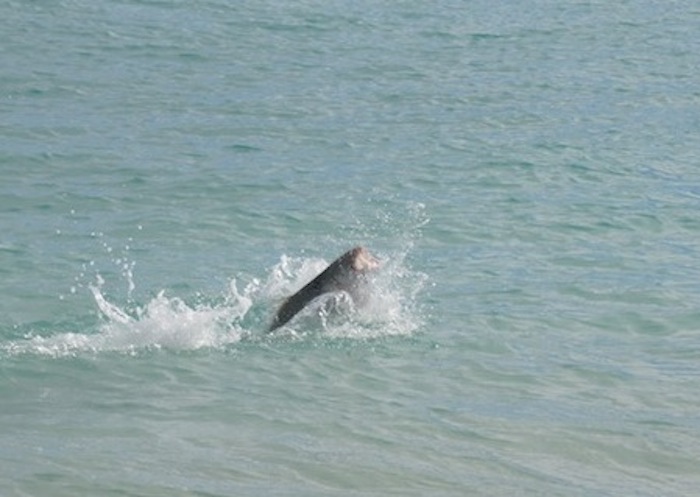 Small salmon are great fun to catch and a reliable catch for many spots on our southern coastline. The smaller fish will inhabit all areas such as estuaries, bays, river mouths and beaches. They can be targeted so many different ways, although the most successful rig would be a paternoster rig consisting of two hooks above a sinker. The hook size should vary due to the size of the fish but a size 6 is a good all round size. Your sinker should vary due to the distance you may need to cast and a larger sinker is needed in stronger currents or surf. For anyone looking for sport, large schools of smaller salmon can create a hot session on lures on light tackle. They hit hard on all lures although it is hard to beat the metal slice in either gold or silver. Soft plastics and small hard body lures are also lethal when targeting salmon. 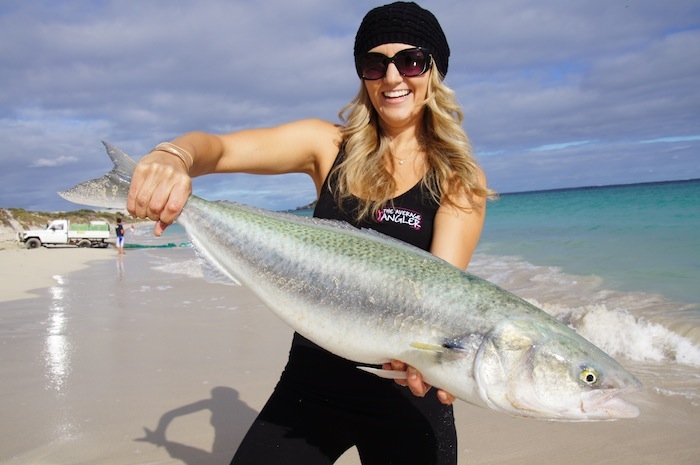 Chasing the big salmon which migrate in large schools is an addictive type of fishing. No other type of fishing is similar seeing that the fish will be in such large numbers and that they frequent the same locations like a tradition each year. With such big fish in close range to the shore creates many options for lure fishing for sport. Fish of 5 kilos will burn 15-20lb line of your reel at high speed or you can go lighter if you really would like to challenge yourself. The most common method is using a surf rod of around 12ft with a large metal lure which can cast a long way. I find these large rods and reels nowhere near as effective as a light to medium 7-9ft spin rod. Modern day light set ups of this length with smaller reels provide far greater casting distance.  If you go lighter you can cast all day and catching the fish also becomes a more enjoyable experience. Large surf rods are designed for casing out large baits and sinkers and then waiting, not continually casting lures. Going light for big salmon is the key to good times in my book. Using surface lures also bumps up the fun with the explosive visual aspects. Poppers, stick baits and plugs all cast well and are lethal on big salmon. Fly-fishing is also a sporting way to catch salmon when the thick schools are in close. Obviously it may not be ideal if it’s shoulder to shoulder with anglers. I have seen many occasions when the salmon are in the perfect spot to cast a fly. As a beginner to fly fishing I am longing for the annual salmon run to see if my fly rod can handle the challenge. I can only imagine how they will go on fly; it should be a real buzz. 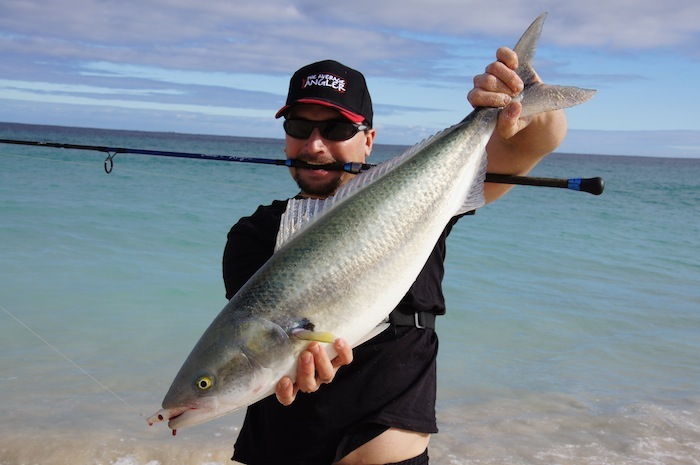 Australian Salmon have the worst reputation as an eating fish and I can understand that their oily strong tasting flesh is not desirable to everyone. I’m all for catch and release but eating all of one species and avoiding others throws out natures balance. On a good session we sometimes will catch and release 30 salmon of over 4 kgs. Obviously we only take a few for a feed but over the years we have experimented with them and created some great recipes. Salmon paddies are a favorite as are rissoles or burgers; you can use any basic burger/rissole recipe and use salmon instead of beef. They are excellent when smoked and I can also recommend fish curries, which work well with strong flavored fish like salmon. If you’re out to find some salmon good luck! It would be hard to live on the south coast without them. After all, down south we are limited with our lure hungry sport fish as opposed to the lucky northerners. A fish like this should be taken advantage of as no better fish is around to test out your lures on.