Impoundment Barra have behavioral characteristics which have baffle the most seasoned of anglers. Every successful session has been paid for with many fruitless hours or days on the water. It’s true, there is no substitute for experience. However, with the following information, one can steepen the learning curve when trying to crack the dam Barra code. As with all fish, they are not governed by hard an fast laws, there are always exceptions to the rule. 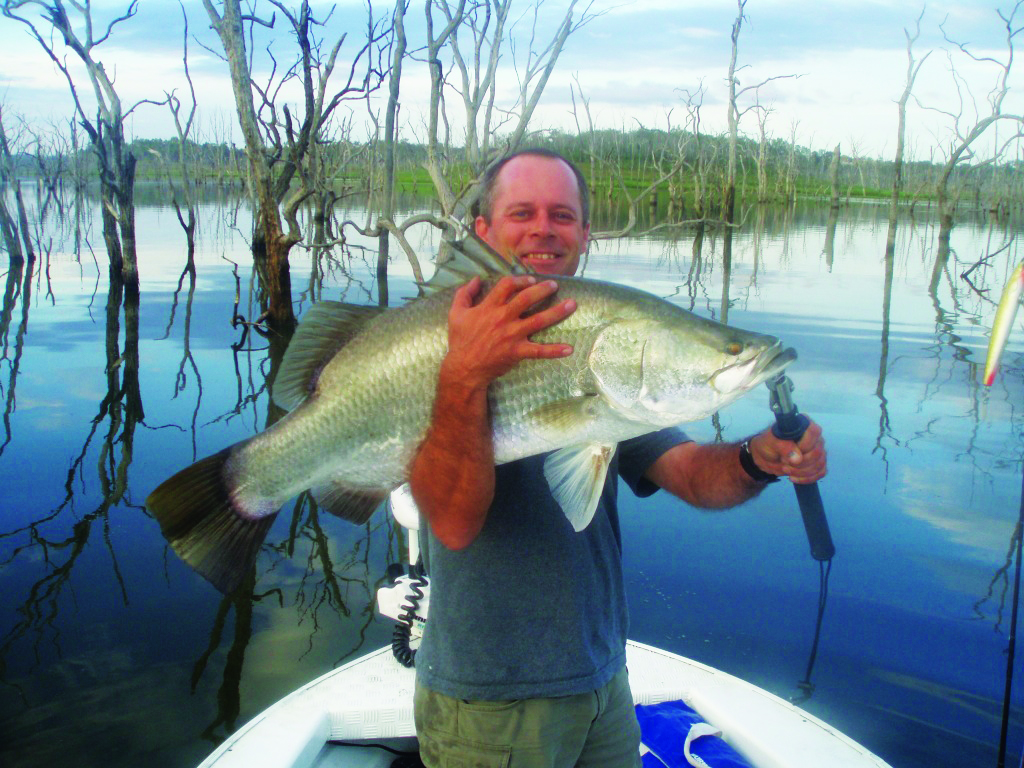 Locations
Spread throughout central and northern QLD, impoundments stocked with Barramundi spoil the angler for choice. Some produce more fish than others. Particularly after the flooding events of 2011 and early 2012 (Awoonga in particular has suffered a severe loss of it’s Barra biomass over the spillway). Tinaroo, Teemburra, Peter Faust, Monduran, Callide, Lenthalls and many others, all boast great stocks of Barra, and are within a manageable distance of coastal population centres.

Behaviour
The movements and feeding windows of lake Barra are key to success. Whilst being in the confines of a dam, Barramundi move and migrate around as wind, current (not tide), rainfall, temperature and other factors dictate. These fish have an unlimited supply of feed, in the form of Garfish, Boney Bream, Shrimp, Crayfish, Terrestrials, Catfish and other small boney fishes, this means they can choose to feed when prevailing conditions are ideal. So while finding bait is key to finding Barra, this does not necessarily mean success is ensured. This is what has anglers tearing out their hair and organizing their next trip. Frustratingly addictive is an apt description of Impoundment Barra. 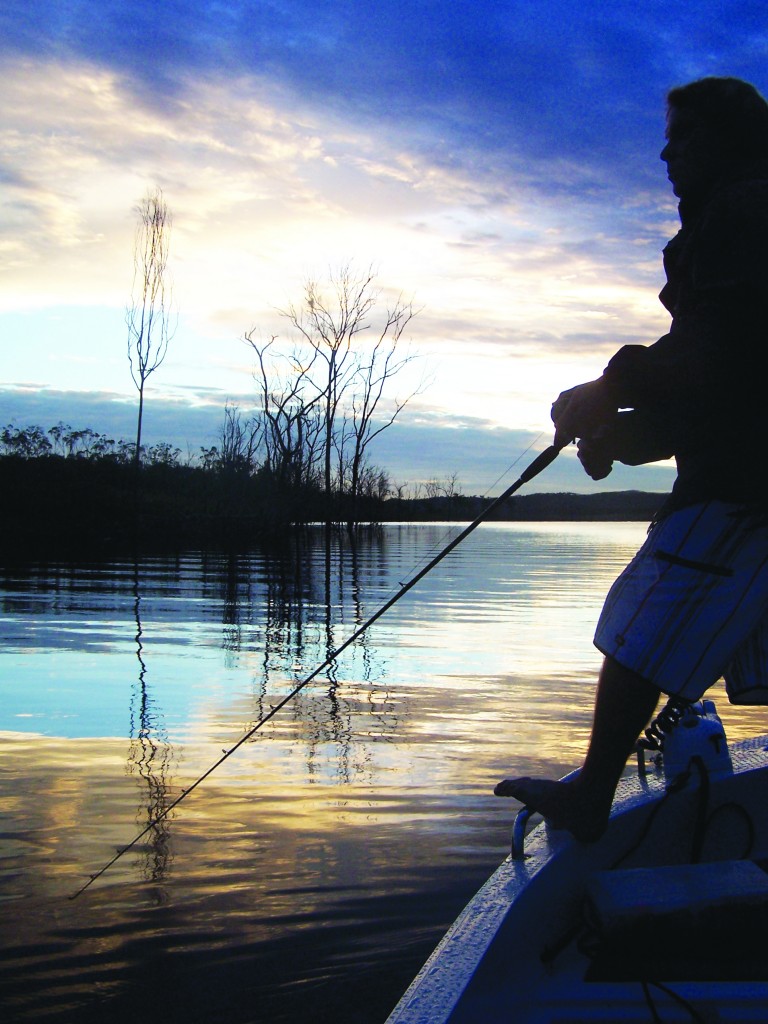 Wind
A lot of the characteristics of lakes are dictated by wind conditions. Wind can be responsible for water temperatures, clarity, current and wave action. As a rule, the windward margins of a dam will hold the warmer, dirtier, rougher water. While the sheltered shores will be crystal clear, cooler and calm. In colder conditions this can mean focusing on the windward shores, Barramundi have no fear of water with near zero visibility. Alternatively, calm, cool areas can be the key during the warmer months.

Current
By nature, Barra are generally somewhat of a lazy fish, placing themselves in holding areas where bait will be pushed to them by prevailing conditions. Dams naturally lack the tidal movement to create back eddies and current breaks, which are utilized as ambush points for wild Barra. However prevailing wind or rainfall conditions can cause water movement adequate to move baitfish around the system. Finding corners and eddies which will have current running past is the piscatorial equivalent of a pizza delivery. Finding areas such as this is reason enough to spend a considerable amount of time casting with an array of different offerings. Remember, have faith in areas such as this even after a few untouched presentations; lure selection can be the key. 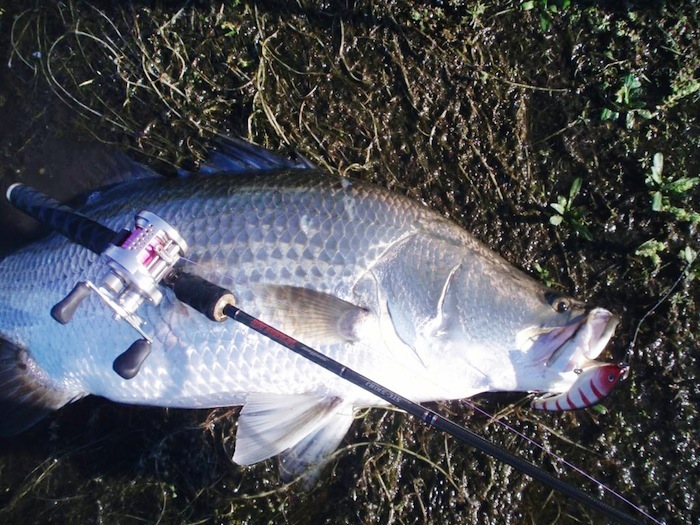 Water Temperature
A lot of anglers are under the assumption that Barramundi feed harder the warmer water becomes. This is not the case.
It’s true, Barramundi will generally bite best in the warmest area of a cold dam. However, as water temps rise to their peak in late summer, Barra can be found seeking shelter in thermoclines and areas of shade. Only finding the urge to feed during more comfortable temperatures at night or in the early morning. I personally like a water temperature between 23-27C.

Rainfall
The life cycle of all Barramundi requires them to enter the saltwater in order to breed. In the wild, billabong fish use season rainfall and peaking river levels to escape and migrate downstream to spawning grounds on the coast. Lake Barramundi (particularly 90cm+ specimens) have these same biological urges. After heavy rainfall, Barra will begin to push and migrate towards the downstream margins of dams – Dam walls. While the majority of the time this is a fruitless effort, it only takes one look at videos of countless trophy class Barramundi falling over the Awoonga spillway in 2011, in order to see the truth in this theory.

Habitat
Dams possess a vast array of areas Barra can rest and feed. From 15m sections of main basins and river beds, to bays barely deep enough to cover the fish’s back. Add to this, snags, drop offs, weed beds, rock bars and even open water. The fish in these dams have all the choice in the world on where to hold and feed.
Snags & Timber
In a lake full of drowned timber it can be a daunting prospect to decide which snag to cast at. Try to focus on fallen, horizontal trees, ideally those which can catch some current. Or a small cluster of trees in an otherwise open region.
Weed beds
Weedy edges can be hunting or resting grounds for Barramundi. It is often possible to see fish ‘tailing'(laying stationary with tips of fins visible above water) right in the heart of deep weed edges. Do not waste too much time casting as these fish as they are generally near impossible to tempt.
A large weedbed with current running past it’s margins is a much better prospect, particularly where these beds come to a point of apex.
Deep water congregations
Barra show up very well on a depth sounder, and large aggregations of fish can be found laying in deep sections of lakes, over rockbars, drop-offs, or even in the mid to upper water column. These fish can be feeding or resting, but they are always worth a cast or 50. Particularly if there is a bait school nearby.

Tackle
Baitcast and spinning tackle can both be utilized for impoundment fishing. Aim for rods between 5’6 and 7′ with a raiting of 12-25lb.
Baitcasting reels with good drags and quality 2500 to 3500 size spin reels are perfect. Mainlines should be of the braided variety in 20 or 30lb(sometimes 50lb is necessary). This should be attached to around 5ft of 50-80lb monofilament or flourocarbon leader via an Albright or Slim Beauty knot (instructions for all knots mentioned can be found online), attach your chosen lure via a Perfection Loop or similar. Test all tackle and connections before deploying, these fish make a living out of destroying anything with a slight weakness.

Lures
There is barely a lure on the market which a Barra wont be tempted to eat at one time or another, this does not mean they are easy to seduce, just that they can be triggered to bite by a number of lure characteristics. Size, vibration, sound, shape, action, depth, and colour all play a role in whether or not a lure will be attacked, refused or even feared. Arm yourself with lures between 60-180mm of every shape and size you can.

Both hard and soft plastics can be used to great effect in shallow water. Bibbed or bibless hardbodies and surface lures, which float or suspend, with a diving depth of 0-6ft are ideal. Brands to look for are Reidy’s, Classic, Bomber, Duo, Strada, Killalure, Rapala, Lively Lures and many others, Remember to mix between both lures with rattles and without. There can not be enough said about the effectiveness of lightly or unweighted soft plastics in the shallows, particularly when rigged ‘weedless’. Look for paddle tails, frogs, and creature baits from 60mm to 150mm from Brands like Z-man, Berkley, Squidgy, Zoom and Storm.

This depth range can be prospected with both medium weight soft plastics and mid depth hardbodies. Suspending lures can really come into their own. All the above brands produce fantastic lures for this depth range. Aim for depth ratings of 7-15ft.

Deep water 15-50ft
This is where sinking lures come into their own. These depths are outside the realm of the majority of hardbodied lures. Bibless minnows, Blades, soft plastics, octopus jigs and even metal spoons produce fish in these areas. Brands to look for are Jackall, Cotton Cordell, Thready Buster, Spanyid and Reidy’s all produce sinking lures ideal for targetting deep water Barra.
Remember, only use lures with strong hooks and split rings. If it looks anything but bulletproof, then upgrade it to heavy duty gear. Owner, Halco and VMC produce upgrades for the majority of lures. 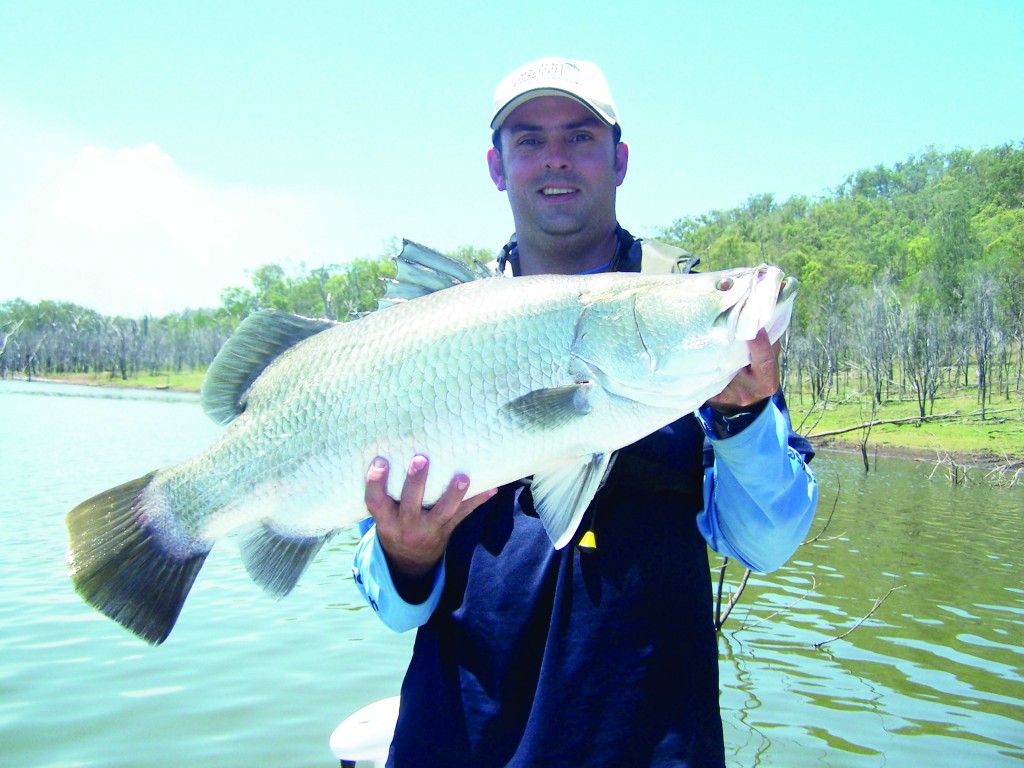 Retrieves
Whether casting your lures close to structure, or wide across an open bay, try to identify areas which are more likely to receive a strike. Focus on these areas, rather than flogging dead water to foam. All retrieves can be successful, so mix and match until you find what is the flavour of the day (or hour). Fast burns, dead slow cranks, twitches, even pausing lures for 30 seconds plus can result in triggering a bite.

Fighting technique
Impoundment Barra are balls of muscle, scales and slime. They can tear line from a reel at max drag, burning the anglers thumb in the process. The first run of an angry dam Barra is something to behold. Some fish head for structure, some head for deep water, but they all do it hard and fast.
The structure in dams generally lacks the line cutting ability of an oyster covered snag, so fish which reach the refuge of timer piles and weed beds can be recovered. Sometimes the best method is simply to disengage the reel and take the boat around the obstacle, rather than bullying the fish back from whence it came. Being too aggressive generally results in torn hooks and lost fish. Open water fish can be fought with a lighter drag and kid gloves, resulting in far less fish lost to torn hooks. When it’s time to land your trophy, be patient, lake Barra lack the stamina of wild fish and late in the fight fish are generally quite subdued. Lead the spent fish to a waiting submerged net (ideally ruberised), and slide it in headfirst. The fish is now yours, act quickly to measure and photograph all fish destined for release. Be sure to support the fish’s weight at all times, never putting unnecessary pressure on the mouth or throat. If necessary, swim your fish boatside prior to release, they will begin to bite down on your hand as they recover. All anglers are completely within their rights to keep any fish (see local regulations), however with a very high fat content and sometimes weedy flavour, the eating qualities of freshwater Barra are far outweighed by their fight.

Get out there
Gather what you can from the above text and get out there, as stated earlier, there is no substitute for time on the water, but hopefully this can put you on the fast track to impoundment success.