I must admit that I get a little excited at this time of year, as March focuses my mind on just one thing: barramundi. With the wet season normally in full swing over the next couple of months, heavy rainfall can swell the upper reaches and tributaries of most river systems, and the barra (after dutifully spawning the next generation downstream) are trying to make their way back up into the creeks and billabongs to chill out and grow fat before the next year’s rains prompt them to travel downstream again. If you know where to go and can get your timing right, there can be some exhilarating fishing on offer.

So, where do you go? The majority of Queensland’s coastal waterways have sections of freshwater that flow into them that for most of the year have little or no flow, and are simply a collection of small creeks and pools that are only just linked, or are broken up by weirs and spillways. When it comes to researching potential fishing spots for this angling scenario, Google Earth is your best friend. Whichever system you intend to target, simply follow it as far as you can upstream to see where it goes. Quite a few of my local ones cross under bridges, roads, culverts and the like, which makes for some very convenient access points without needing to go bush and get bogged or cross through private property. Once you locate potential spots, it’s always a good idea to check them out before any major rain simply to get the lay of the land. When the levels are at their lowest it becomes easy to identify potential target areas for when the waters rise. What you’ll be looking for is any sort of structure that will allow the barra to sit on / beside / behind / underneath that will give them a place to hold out of the current and provide an ambush point for smaller prey items getting swept along in the flow. It also gives you a chance to suss out good casting points and places where you can safely fish from, plus it doesn’t take too much imagination to visualise where back eddies will form or where bait congregations will be forced to hold up out of the strongest part of the flow. 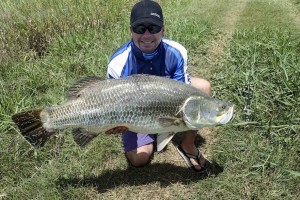 It has to be said that there is an element of danger involved in fishing flooding creeks and drains, but this can generally be avoided with a bit of common sense. Some simple precautions are all you need to ensure a safe trip. For example, make sure you tell someone where you’re going, and take adequate hydration, as the heat at this time of year can really knock you around! Never attempt to cross fast-flowing water in a vehicle or by foot, and, whilst fishing, at all costs avoid standing in running water as the current can be deceptively strong. It takes only one wrong step to be in the drink and swept downstream, and barra are not the only critters to be on the move while the waters are high. Estuarine crocodiles are a fact of life in North Queensland, so it always pays to be on your guard. 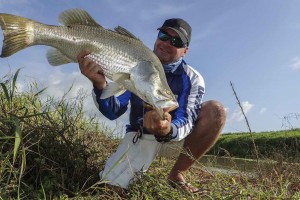 The other and probably most important factor to consider is what the water levels are doing. By that I’m referring to whether they are rising or falling. An obvious caveat that comes with this is to be aware that floodwaters have strong currents and must be fished with care – rising levels can be dangerous and unpredictable. My advice is to wait till the wildest of the weather has passed and fish the drains as gullies as the water levels begin to subside. Not only is this the safest time to fish, it’s also the most productive, as in the receding waters coming off any flatter open ground are the smaller baitfish who thought they were safe by getting out of the deeper water. As they get funnelled back into the main gully of the drain the barras are waiting for them, and such an influx of food can cause a feeding frenzy. I’ve had sessions where it’s been a fish a cast for as long as you can be bothered to keep flicking, and the lure I was using was tattered, torn and missing its paddle tail … and still the barra were hitting it with such gusto that they were becoming airborne on the strike like leaping mackerel. 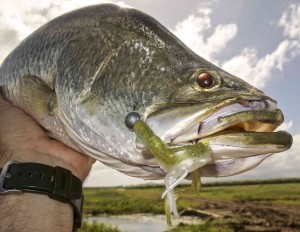 Speaking of lures, your choice can be narrowed down depending on the speed, colour and depth of water you’re fishing. For fast-moving or deep water, I’d be using a heavily weighted plastic (even up to an ounce in some cases) or a diving floating hard-body. Suspending or sinking minnows won’t always give you the desired results and may get forced down too deep by the flow, often causing them to get pushed out of the strike zone or become fouled on the structure you’re trying to fish. With a floater, it can be worked through any stronger water or past any structure and hopefully into a bit of slacker current. As soon as you pause the lure it will drop back and begin to rise, like a tired prey item resting, and usually ends up getting belted.
Floodwater is usually dirty (unless it begins to run clear after sustained rainfall) so lure choice falls into two categories: noisy (i.e. with some sort of rattle, movement or vibration that creates a sonic signature for predators to home in on), or contrasting (for example very dark colours will stand out, as will very flashy ones such as silver or gold). In past seasons I’ve persisted with either hard-bodies or paddle-tailed plastics with great results, but the ever-evolving world of artificials has thrown out some real corkers of late that can really improve your catch rates. 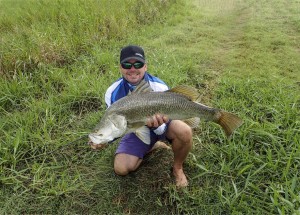 Now, whilst things such as vibration lures and swimbaits have been around for a while, their increasingly mainstream use is highlighting just how versatile they can be and how effectively they can imitate the barra’s food source in this scenario. Whilst vibes will always be one of my favourites for fishing flooded drains, it’s the swimbaits that have recently captured my attention – I’ll explain. It comes down to observations I’ve made over the years whilst targeting floodwater barra. On many occasions, I’ve witnessed prey items of one species or another huddled together in a quieter back eddy begin to get hassled by a larger predator. And since they have only one option from their ‘fight or flight’ instincts, they bolt across the top of the flow in an effort to escape, often pursued to their untimely demise by said predator…and that’s exactly how a swimbait can be fished in flooding water. By casting into the eddy, a moderate-paced retrieve will see the swimbait quickly snake its way just sub-surface through the stronger flow and slowly drop as it reaches slacker water, ultimately getting monstered by a hungry fish. The aim is not so much to ‘match the hatch’, but more to imitate a panicky fish in flight. 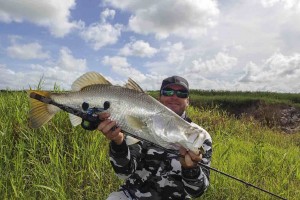 A quick note gear-wise – in the world of fishing floodwater, the baitcaster is king. Whilst others might enjoy success with spin gear, I find that the precise casts and meticulous line control needed for this situation can really only be delivered by a baitcast set-up. Very small movements of line gathering coupled with the ability to rapidly put another cast in the same spot if you miss a hit will see you hooked up more often. Added to that the often shorter, stockier nature of baitcast rods (even though there in now a growing trend towards longer rods – especially for swimbaiting) allows you to muscle any hooked fish bankside as quickly as possible. There are two reasons for this. Firstly, if you’re into a school of feeding barra, the quicker you can get a hooked fish out of the water, the less chance there is of spooking the others. And secondly, if you intend to release your capture, the fresher they are the better. Tired fish are as much at risk of coming to grief in the strong currents as you or me.

Probably the most important factor to consider, and where the most emphasis on technique should be placed, is the path that your offering takes through the water relative to the area you’re fishing. I’ll throw a few examples out, but these are only generic situations which may or may not occur in your chosen fishing spot. It’s probably fair to say that these techniques are applicable to a wide range of scenarios where you find faster water flowing through bottlenecks or around structure, so they can be used to suit whatever situation you find yourself in and not solely for the purpose of targeting barra in flooding waterways. The key aspect is getting the most “hang time” possible. If casting a shallow-running hard-body upstream, especially into shallow, faster-moving water that’s flowing over a ledge or drop-off of some sort, it pays to work your lure with the bare minimum of retrieve, only just keeping pace with the current. Short, sharp jabs of the rod tip will impart a jerky, erratic movement to the lure, but wind in only enough line to just keep in contact with it. Often, as it passes into deeper water, it will be viewed as a tasty morsel and get walloped. The same lure cast to the slacker water at the side of the run and then slow-rolled through it at 90 degrees to the direction of flow is just as effective, often getting hit as it passes into slacker water again on the other side of the stronger flow. To work a lure against the current, switch to a deeper-diving floater and cast downstream. Here you’re able to use the run of the water to your advantage, as without retrieving line you can pull the lure down to depth with the rod alone and then back it out again with the opposite movement, resembling a tasty morsel struggling to get upstream – again, a definite target for a hungry barra.

To sum up, it comes down to this – when there’s bulk water around, try access points as far upstream as you can – you’ll be amazed at the size of fish that will travel up into super-skinny water looking for a feed. The only downside to this is big fish sometimes get trapped in a hole with inadequate food supply, where they may not last too long.
Some people say if it’s flooded, forget it. While that might be true for trying to drive through floodwaters, I’d say the opposite for going to fish in them. If you can find the right access spot and the water levels are beginning to drop, the land-based barra fishing can be amazing!