Not many experiences in fishing compare to having your surface lure engulfed right before your very eyes. Targeting Australia’s premier sportfish, the barramundi in this manner is not only exhilarating but very effective when conditions suit. Spread across the top half of Australia the barra is accessible to a vast population of people. Whether targeting them in stocked impoundments, billabongs, freshwater creeks, saltwater estuaries or coastal headlands and beaches; all these areas will produce surface feeding barra at some point, although some will produce more consistently than others. 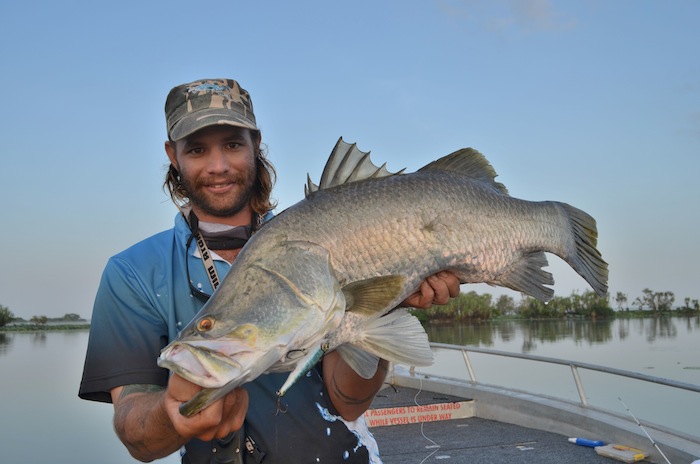 Barramundi inhabit coastal inshore and freshwater waterways across the top half of the country. The varied feeding environments of Barra offer many opportunities for anglers to effectively present surface offerings. In saltwater or estuarine habitats, focus your efforts on wide shallow flats, stands of small mangroves and snag piles. Generally any water less than about 3 metres for best results. When targeting Barra in billabongs or impoundments, target areas include weed edges, mudflats, lilly beds and snags. As with saltwater environs, focus on a water depth of 3 metres of less.

The majority of food sources for Barra spend part or all of their time inhabiting the surface layer of the water column. Mullet, Tarpon, Garfish, Prawns and other baitfish can be seen regularly shivering nervously in the shallows, periodically being smashed by predators. Barra are relatively easy to identify in this situation. A very distinctive ‘boof’ is produced, this is due to the Barra being implosion feeders. They simply open their mouths at great speed, creating a vacuum. Water, baitfish or prawns in close proximity to the mouth are engulfed never to be seen again. 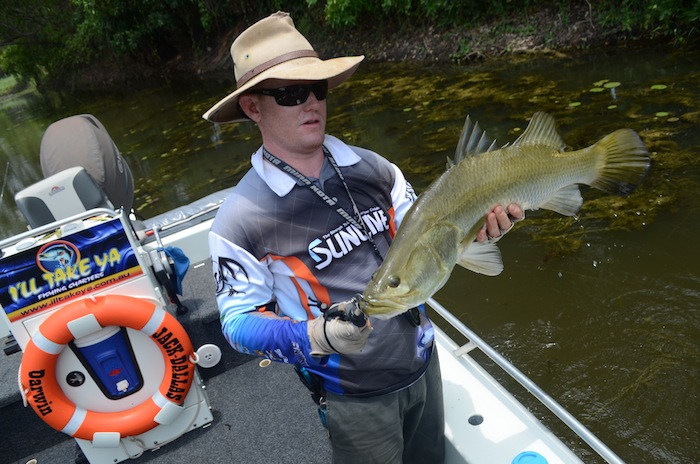 A wide range of tackle choices are available to the angler when targeting surface barra. Generally a spinning or casting rod between 6-7′, capable of fishing the chosen line class is ideal. Spinning reels in the 2000-3000 bracket are suitable and a a standard barra bait caster is ideal. I prefer to use as light tackle as practical when surface fishing, light rods and reels are a pleasure to use for prolonged periods and produce a better action in lures. Line class is determined by the structure which you are mainly targeting. When fishing open flats or weed edges 4-6lb will suffice, however this will be grossly under gunned if you decide to target lilly beds or snags.
A happy medium which will land the majority of fish is around 20lb braid. Due to the raspy plates inside the mouth of a Barra, endeavour to utilize leaders 30lb and over. If there are larger fish of around 80cm or more in the system. I would opt for 50lb hard monofilament of fluorocarbon.
When fly fishing, an 8 weight outfit, equipped with floating line and 30lb leader is more than capable.

Rigging
When surface fishing rigging is fairly basic, simply join your braided mainline to your leader by an Albright or Slim beauty knot (tying videos can be found online). Leader length and material is one facet of rigging which can be trickier. Due to the sinking nature or monofilament and fluorocarbon, opt for shorter leaders, of a metre or less. This enables the lure to be worked more effectively, freeing up the action. When using very subtle presentations I often shorten leaders down to around 30cm, rather than downsizing leader strength. 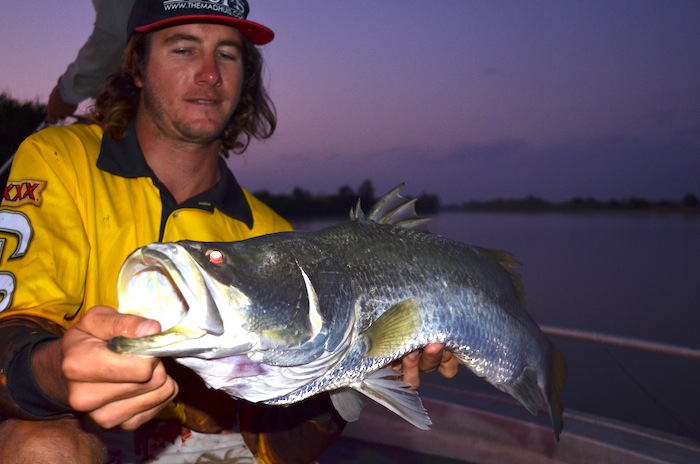 Feeding times
The primary surface feeding times of Barra are in times of diminished light, however they can be targeted through the middle of the day in shallow water, particularly in tidal scenarios. I generally opt for a predawn or late afternoon start, or simply fishing the darkest hours, this seems to be the most effective way of specifically fishing the surface. I have not found any results to show that moon phase has any effect on the feeding patterns, new moon, full moon and both building and waning moons have all produced. However specific bite periods relating to moon position have produced differing results in different areas, the only real way of finding the ideal conditions is trial and error in your location.

Walk the Dog
Surface sliders, walk the dogs or stick baits are my go to surface lure when fishing open areas. Lures of between 70mm and 130mm all produce fish. These are one of the more subtle surface presentations particularly in timber versions. At night however, opt for lures with a nice loud rattle to draw attention from longer distances.
These lures are designed to dart side to side when twitched with the rod tip. Varied retrieves are effective. When fishing open areas with a long strike zone, I like to get a good rhythm going, periodically pausing for a few seconds then re-commencing the retrieve. Lures are more often than not booted when stationary. When fishing snags or lillies, it is sometimes better to work the lure over very short distances between pauses, this gives the fish more time to find the lure before it leaves the short strike zone. 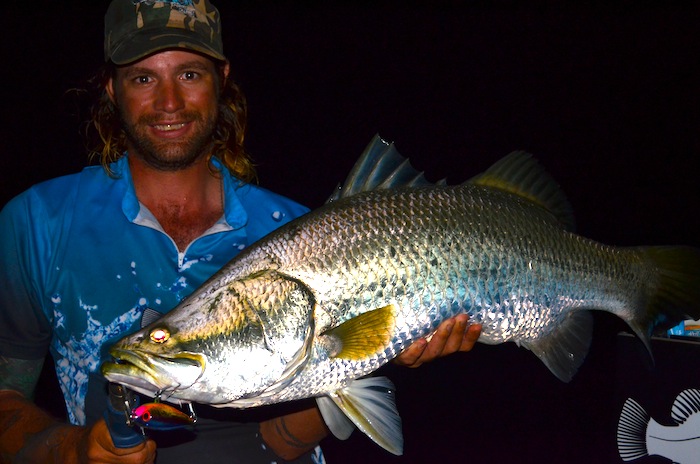 Fizzers
Fizzers are suface lures possessing 1 or 2 propellers which create disturbance when the lure is drawn forward. Lures between 80mm and 130mm produce lots of strikes, although the hookup rate is not great. Rigging these lures with 2 or 3 split rings connected in a chain, allows the trebles to swing much lower from the propellers, facilitating a much better hookup rate. Like most surface lures, fizzers are generally eaten on the pause. The most effective retrieve is to stab the rod tip sharply download (you should hear the buzz of the propellors) then pausing the lure. However I have had success fishing around schools of slow moving mullet, when simple winding the fizzier at the same rate which the bait is moving. Try varied retrieves and assertion what is working at the given time.

Poppers
Poppers are probably the most aggressive form of surface lure available, these lures come into their own in windy or wavy areas where surface disturbance may mask the sound or vibration of other lures. Poppers are great for fishing around headlands or windward flats. Poppers between 60mm and 100mm all produce their share of fish, larger lures tend to produce too loud of a splash. Once again with poppers, the pause is the key, when fishing areas with a wide strike zone give the poppers several twitches and then a pause, when is areas with a smaller strike window is can be more effective to give the popper one small twitch and a long pause. With poppers more than any other lure, it is all up to the angler to entice the fish to strike as their is very little in-built action to the lures.

Surface Plastics
These lures come into their own in areas of heavy structure. Rigged weedless they can be cast deep into snags, weed beds and lilies. Often these lures produce in daylight when no other surface lures are attracting attention. The subtle and silent nature of plastics can be the difference when fishing outside of bite periods. One other advantage of these lures is hookups tend to be more solid with a single weedless hook, resulting in less jump offs. When retrieving surface plastics, a slow roll with the odd twitch and pause is all that is needed to attract strikes. These lures can also be sunk on the pause to attract attention a little deeper if the fish aren’t enthusiastically rising initially.

Surface Flies
Surface flies such as Dahlberg divers and Foam poppers are fished much in the same way as conventional poppers, sizes ranging from 60mm to 100mm all produce fish. Sometimes the natural movement of fur and feathers can trigger strikes which no synthetic material can match. So much to the point that at times I have had to use surface flies on light spin rods to attract strikes. A short strip followed by a pause is an effective retrieve for flies, doing this slowly is the key, as these lures are quite subtle and it may take the fish time to find the offering.

Jerkbaits or Wakebaits
Floating jerk baits, rip baits, wake baits and slash baits can all be used as a surface lure. These work much in the same way as a popper, however when stabbed with the rod tip they dart downwards rather than straight across the surface. This gives the fish a better look at the lure and can engage otherwise uncooperative fish.
Wakebaits and jerk baits can be retrieved slowly, wobbling side to side, periodically being paused for best results. Or alternatively, they can be stabbed down and then paused long enough to float on the surface. I have found the second retrieve to be most effective when fishing in heavy structure with a very short strike zone. 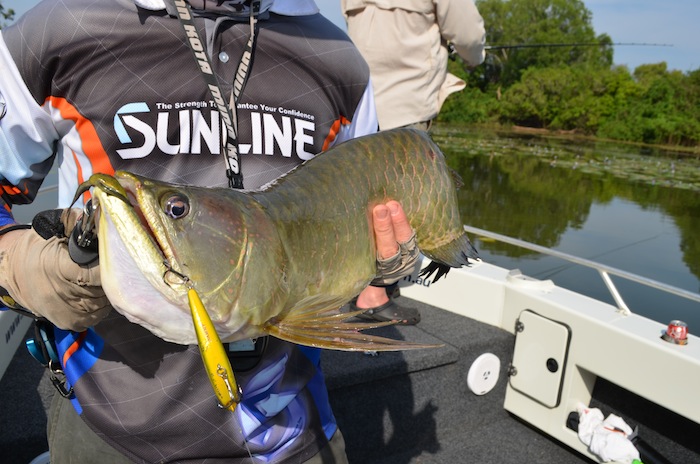 Lure Colour
Lure colour depends primarily on available light. Blacks, dark blues and other dark colours seem to be the most effective at night, casting a harder silhouette against the sky. This enables fish to hone in more effectively and strike more accurately. During the day, conventional colours produce just as well, and sometimes if fish are particularly hard to tempt, clear lures are stand out producers, particularly if there is an abundance of prawns or shrimp present.

Other Species
When targeting Barramundi on surface lures there is a whole plethora of species willing to jump in first and snatch your offering. In tidal estuaries across the top half of Australia there are a vast number of species on offer when fishing surface. Trevally, queenfish, mangrove jack, pikey bream, king threadfin salmon and blue salmon are all more than willing to smash a surface lure and can provide some great fun between strikes or on slow days. If specifically targeting trevally, queenfish or blue salmon, simply speed up the retrieve to induce strikes. For the other species, retain your standard retrieve. Northern Australia possesses some great freshwater sport fish besides barra. Saratoga are generally most sought after, but there are also tarpon, sooty grunter, jungle perch and freshwater mangrove jack to name a few.
Conclusion
Many anglers believe that successfully targeting Barra on the surface is a rare occurrence; however if you spend some time getting in tune with a surface bite, it can be not only the most exciting form of barra fishing, but also one of the most rewarding. 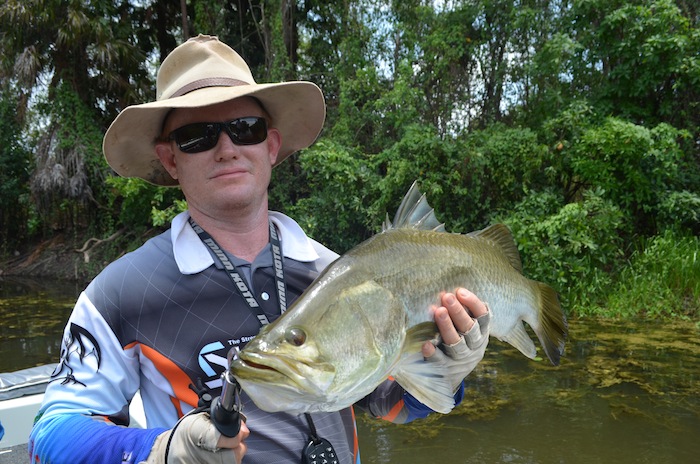