The tropics of Australia offer many varied and challenging scenarios in which to target the mighty barramundi.  However, if big wild barramundi are your primary target, one of the more productive techniques is trolling the tidal flats and channels at the mouths of large arterial rivers in the run-off.
During this time of the year annual floodwaters carry a bounty of baitfish down the rivers and out to sea where they congregate in large schools around the river mouth flats. Subsequently these areas act like a magnet for big hungry barra, drawn by an insatiable appetite as a result of the previous spawning season.
Fishing the wide open expanses of the flats can be a daunting prospect and it definitely helps to understand the dynamics of the area and the movements of your quarry. The following is a rough guide to give you an insight into this productive technique. 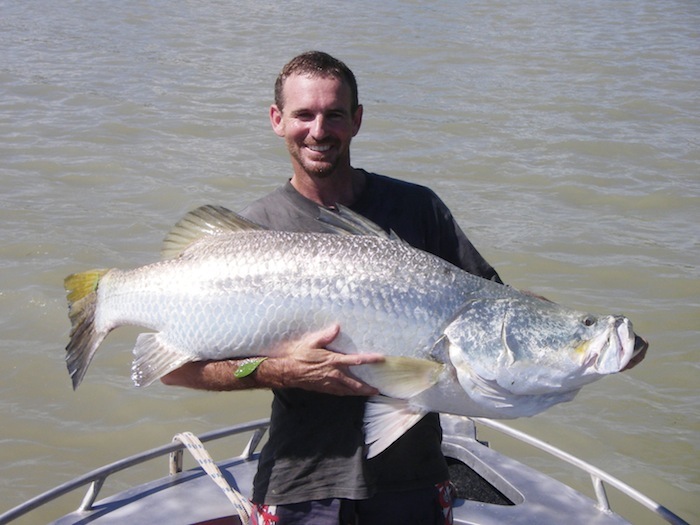 Much of the North Australian coastline is surrounded by vast shallow intertidal mud and sand flats dissected intermittently by rocky headlands, creeks and rivers.  Many of the flats stretch for kilometres and generally offer very little in the way of vertical fish holding structure.  Consequently when a river or creek dissects one of these flats it becomes a mecca for all manner of fish species with the barramundi at the top of the food chain.  The wily barramundi has evolved into a master predator in this environment, utilising depressions in the flat such as river channels to ambush baitfish as they unsuspectingly shimmer past in the current.

Neap tides are generally considered the best for trolling the river mouth flats for big barra as the water clarity is generally at its best and the flats remain inundated for longer periods of time. In theory this allows predatory fish to happily hunt in the shallows unimpeded by rapidly dropping water levels associated with the bigger tides. In saying that, there are exceptions to the rule and in recent years I have had plenty of success fishing on the larger spring tides for really big fish albeit for a shorter window of action.
During the last stages of the outgoing tide barra tend to station themselves in depressions and channels, where there is adequate water depth, optimal water temperature, and most importantly food passing by.  Due to the minimal slope in the sea floor on the flats it’s not unusual for it to only be a couple of metres deep for miles out to sea and it’s in these same areas where big barra can be found during the lower stages of the tide, hugging the edge of a river channel or gutter as it carves its way through the mud.
As the tide rises, barra begin to work their way back upstream, stationing themselves at strategic locations along the way to devour unsuspecting prey as it’s washed by. Once the flats become inundated by the tide barra tend to venture out of the channels and roam the shallows in search of food. In this situation they can be difficult to target, however you should keep an eye out for small pods of fish and bait on your sounder and work the areas thoroughly.
Often clean sea water is pushed in over the flats on the incoming tide forming a distinct colour change. This tide line generally brings with it juvenile salmon and baitfish and when it coincides over the edge of a channel it pays to focus your efforts in this area as the big barra will generally be close by.
At the top of the tide barra can be anywhere roaming the flats in search of bait and it pays to divert your attention away from the channel edges and try and locate pods of fish out over the flats and in the river mouth itself.
On an outgoing tide the cycle is repeated and barra will generally work their way back off the flats and into the main channel to lay in ambush as bait are also forced off the flat by the receeding tide. 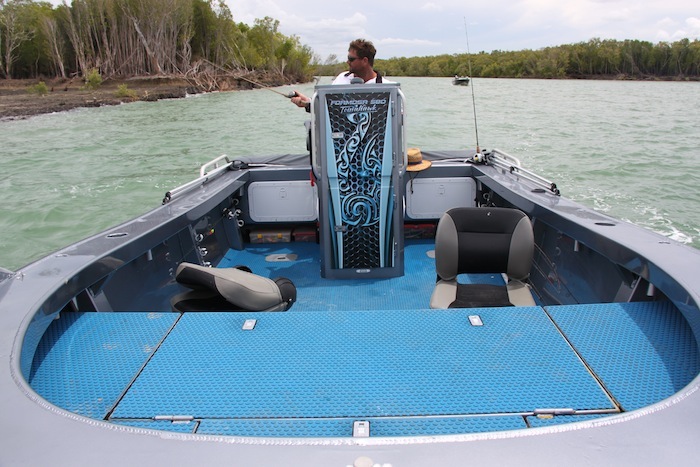 The general rule of thumb I use for lure choice is to closely imitate the prey of your target species. This rule applies for the size, depth and colour of your lures. Colour will always be a personal preference and I generally run with natural colours in the first instance and only resort to something out of left field as a last resort. The most common bait species are predominantly mullet, tarpon, juvenile salmon and occasionally prawns, so it pays to have a variety of lures in various sizes and colours in your arsenal.  Don’t be afraid to include a couple of XOS sized lures in your box either, as big barra will often pursue jumbo prey species such as juvenile salmon. It never ceases to amaze me just how big a lure a hungry barra will hit and upsizing definitely increases your chances of nailing a real horse.
Lure depth is extremely important when trolling the flats and anglers need to be constantly adapting to changing water depths as the tide falls and rises to keep lures in the strike zone.  A lure that is continually grubbing and fouling along the bottom is going to get a whole lot less interest than a lure seductively swimming past at a hungry fish’s eye level. The same goes for a lure riding too high in the water column.
Shallow diving minnows in the 4ft to 6ft depth range such as Reidy’s Big B52’s are proven producers on the flats. However there are times when the fish will hold up on a deep channel ledge or hole where a lure in the 10 to 12 foot range is required. It is also worth noting that lures generally swim slightly deeper when running with the current so it often pays to have a spare rod set up to accommodate trolling with and against the current, negating the need to continually change lures.
Trolling speed is also an important consideration and is often dictated by the flow of the tidal push or the rate at which the flood water is flowing into the sea. I generally like to troll significantly faster when running with a current as it gets the lure doing its thing and working like it should. Trolling too slow in this situation results in the lure losing its inherent action. I have also adopted the theory that a fast trolled lure dragged at the right depth can sometimes trigger an aggressive reaction bite from fish that may have previously   ignored a less noticeable slower presentation. A word of warning though, if you think a metre plus barra hits a lure hard normally, you better be hanging on to your rod extra tight when you hook one while doing 6 knots, as I’ve seen the impact nearly rip rods out of people’s hands. 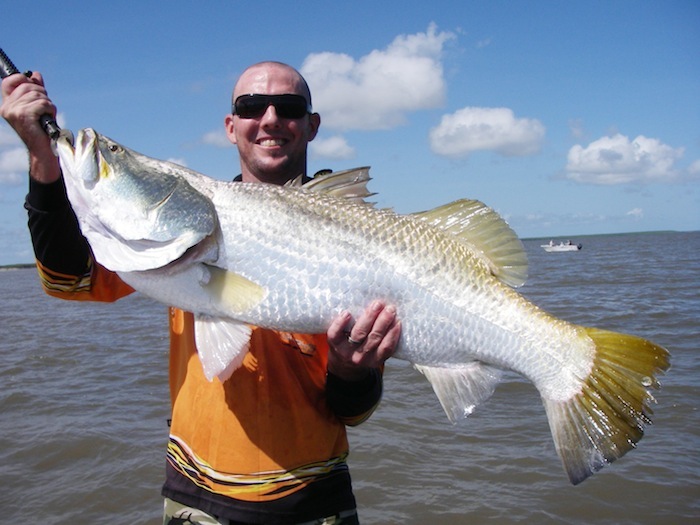 The development of side imaging technology has greatly enhanced the ability to locate fish on the tidal flats.  I have recently started using the new Simrad  NSS 8 touch screen with structure scan and have already found it has greatly improved my fish finding capabilities. Rather than only seeing what lies beneath the boat it provides you to with an image out to either side which is extremely helpful when the barra are roaming the flats.
Most of the new side imaging units have the ability to mark fish with the GPS, enabling you to troll back over the exact location on the next run.  Recently I have been experimenting by trolling lures further back than usual; this then gives me enough time to divert my troll run once I locate fish and intercept them with my lures. So far its only early days using this technique but the results are already promising.
Other than finding fish, your sounder and plotter are invaluable tools for finding and marking channels as they wind their way erratically across the mud flat. I like to plot both edges of the channel early on in proceedings as there are usually limited landmarks to navigate with. Once you have the channel marked you can begin to establish where and at what depth the fish are stationed with your sounder and mark the locations on your GPS.  Then it’s a simple matter of having the confidence in your electronics to work the area until you extract a bite. 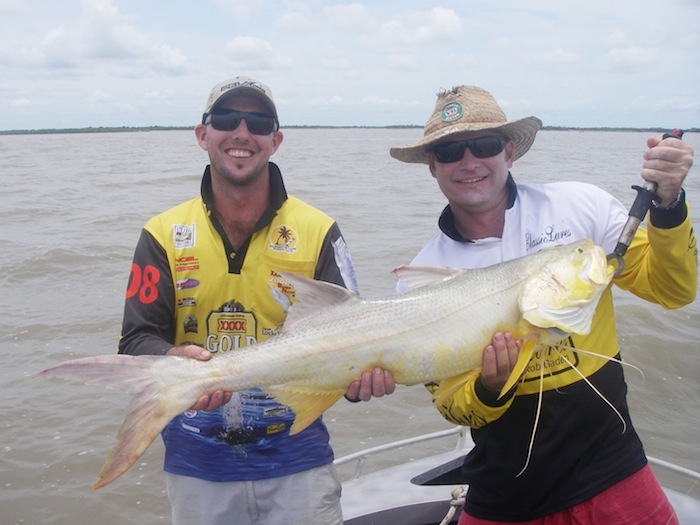 Conclusion
Trolling lures on the flats for big barra might not be every ones cup of tea and at times it can become quite monotonous, especially if the fish mysteriously develop lock jaw and refuse to eat. However, due to the transient nature of the barra which inhabit the river mouth flats, trolling lures has its advantages over other forms of angling as it allows you to cover large areas and consistently produces its fare share of really big barramundi, not to mention other line burning tropical speedsters such as threadfin salmon and black jewfish.