The NSW coastline is a diverse geographical stretch of Australia’s ocean boundary – from high, deep-water cliff faces in the south to jagged, broken and scattered rock formations to the north. One thing the entire NSW coastal fringe has in common is the distribution of one of the best eating fish available from the rock; the eastern rock blackfish, commonly known as the black drummer or ‘pig’.

A hard-fighting, tenacious fish, the rock blackfish has a wide appetite for anything from kelp to crabs and cunjevoi to cooked prawns, so bait selection is easy. Perhaps the most convenient bait is cooked prawns and this is my first choice when chasing pigs. Using prawns puts no pressure on the colonies of cunje in a hard-fished area and is readily stored in the freezer for future use. Buy in bulk when the price of prawns is right and you will always have a ready supply for a spur-of-the-moment trip. (Under no circumstances should you use uncooked imported prawns as bait as Biosecurity Australia prohibits it due to the risk of imported diseases such as the recent infection of white spot.) Freshly cooked prawns also allow you to eat from your bait bucket if the fishing is slow!

Rock blackfish spawn in the cooler months, when there is an increase of activity in the wash zone of the coastal rocks and breakwalls. While the fish are available year-round, the cooler months provide by far the best fishing. The fish tend to gather is loose schools with larger fish skirting the fringes. The only time you need to berley an area, using a mash of stale bread, is when you want the fish to come to you. I prefer to find the fish and that is best done by keeping your gear, and yourself, as mobile as possible. A waterproof pack, shoulder bag, bait bucket and good non-slip footwear is essential. The key to being mobile is carry everything with you so you don’t have to stop to pick up your gear. That way you can flit across the stones from wash to wash without interruption. 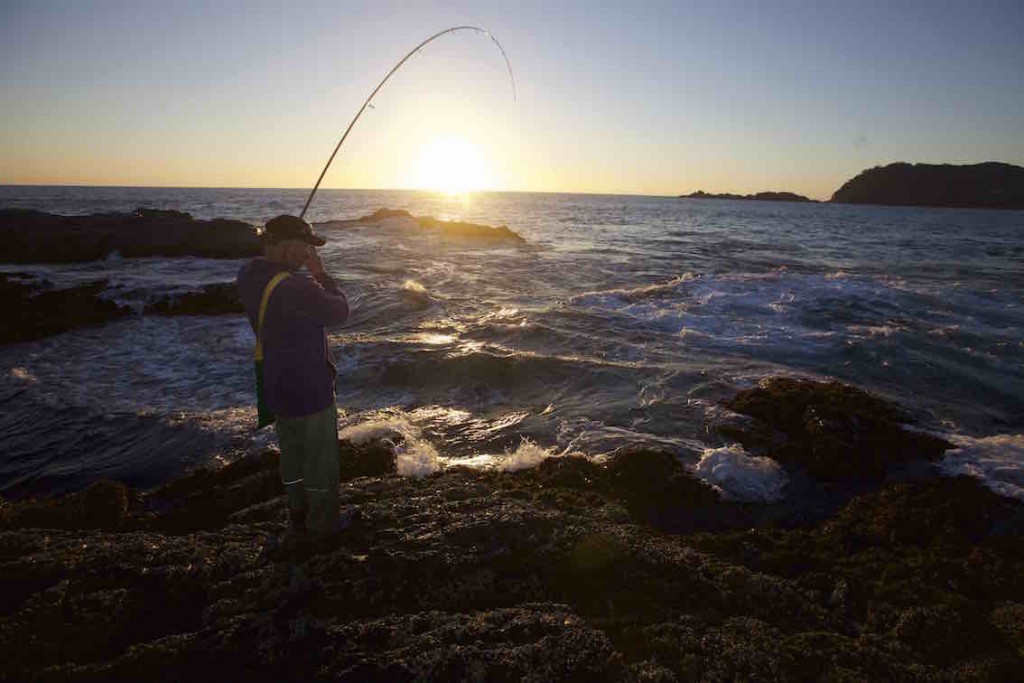 On the Mid North Coast of NSW there are lots of broken reef areas that often dictate you remain mobile enough to search for fish, and pre-plan what headlands you could fish, should your initial choice fail to produce fish. Any given area could hold the interest of the fish and for that reason I prospect, with just bait, various washes that I suspect have sufficient depth and surge to create feeding areas. Holes lined with kelp or surrounded by cunje are obvious choices and fingers of rock that create channels are also worth looking at. If I find a few fish, then I’ll filter out a small trail of bread with the hope it will concentrate the fish in the area.

Bread, softened by soaking it in a rock pool above the wave zone, is then balled up and thrown onto the rock where the receding waves will carry it back into the water in small enough pieces, and quantity, that the pigs get just a hint and enough encouragement to hang around.

They say timing is everything and to some extent it is true of pigs. The best tidal range to fish is from the start of the run-in to full tide. This is when the fish move in to feed in the intertidal zone, which may have had some exposure to the air and direct sunlight. It is also where a lot of the cabbage and red weed grows. Of course, you’ll still catch fish on the falling tide, depending on the nature of the area you are fishing. Low water in areas with heavy kelp beds can make fishing difficult, with line tangling in the growth, so deeper holes or steeper platforms should be the target areas.

Perhaps the most appealing thing about the eastern rock blackfish, apart from the tasty white flesh and bulldog fight, is they prefer daylight hours to feed. No cold, wintry mornings before the sun peaks above the horizon and no chilly after-dark sessions. That is not to say you can’t catch them at night. In fact, some of my best sessions on pigs have been on a new moon where the tide reaches that little bit further up the rock face and the fish know it.

Even with a rising tide and a good wash there are water conditions that will make it difficult to catch pigs. Clear water is almost a waste of time. Sure, you’ll snag the odd fish, but the prospect of feeding and unhooking dozens of crimson wrasse and kelpies isn’t very appealing. Without doubt the best sea conditions are the most dangerous for the angler. A heavy south-east to southerly swell, where the force of the water is dislodging kelp and cunje from the rocks, is what the pigs thrive in. A cold, green sea with plenty of wash and you are almost guaranteed fish, if you can find a safe rock platform on the northern side of a headland. Alternatively, you need to fish as the seas abate and safe access to the south-facing platforms or rocks are available. 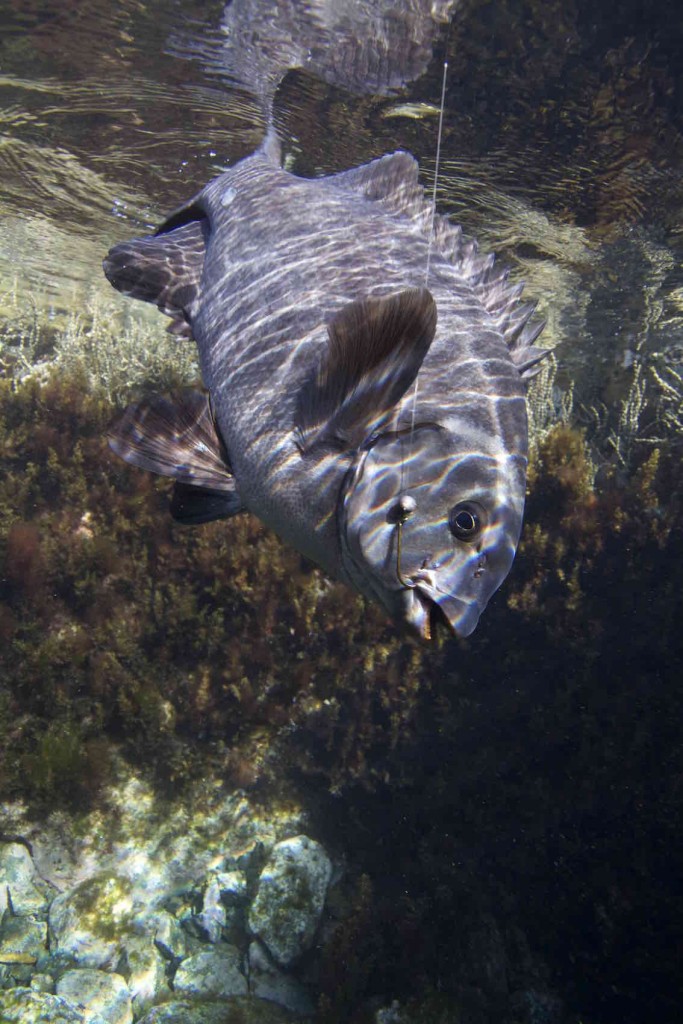 When rock fishing, safety should be the primary concern of all anglers and especially at night. Lightweight, auto-inflate vests are cheap in comparison with a funeral. The economic and emotional distress caused by any fatal accident extends to drownings from rock fishing. Anyone who fishes alone from the rocks without an auto-inflatable vest is a fool. Why auto? It’s because you never know if you will be conscious when you enter the water and this eliminates the risk you can’t respond to pull the deployment cord on a manual vest.

For the rod and reel side of things I find a generalisation is best because what suits one angler and their build may not fit another. You do need a rod at least 2.1m long (2.1m to 3m). The length simply helps to hold your line off the rocks in front of you and provides steering leverage. I like a fast-tapered rod, so the tip has sensitivity but the mid-section of the blank has some guts to pull the fish forward.

As for reels, there is no escaping the advances in threadline reels and the quality and convenience they provide, especially with braided line. Many angler still use sidecast reels but you just cannot beat a 5000 to 6000-sized threadline loaded with a 20lb-30lb quality braided line (Spiderwire Code Red is my preference).

The terminal tackle end of things is as simple as it gets. A running ball sinker (0-01 size) on a leader of 25lb-40lb tied to an Octopus-style hook in size 1/0 to 2/0 and you’re ready to fish. The leader size will be determined by the sea conditions and the type and depth of the reef you’re fishing. Main line strength should be kept around 30lb in braid and up to 40lb in mono. The biggest drawback to using heavier braid is once they get wet the extra weight increases the drag in the water and can result in the line tangling on the rocks or weed, plus it dulls the indication of any bites.

Eastern rock blackfish don’t have big mouths in comparison with their body size, simply because they graze on the foliage of the rocks and scissor vegetation from hard surfaces. The three-pointed teeth are renewed as they are broken off or worn down and because of this your hooks need to be small and extremely sharp. Owner and Gamakatsu have chemically sharpened Octopus-style hooks that are ideal for pig fishing. Both have turned-out eyes that allow you to tie a snell knot to the shank. The benefit of this knot is the direct pull on the shank when striking and far better hook-up rates. 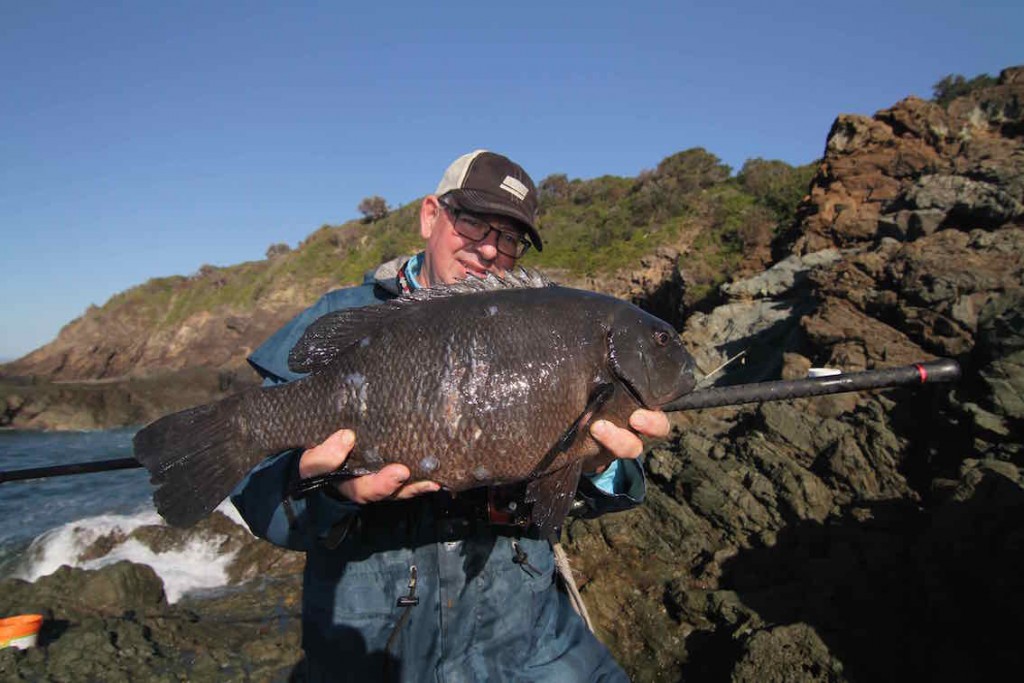 Without doubt one of the best eating fish available from the rocks, the rock blackfish has firm white flesh that works well with any recipe. The fish are best bled on capture and left in a cool, shady spot, which isn’t hard in the middle of winter. Fish around 1kg to 2kg are the best to eat; fish over 3kg can get tough and rubbery. 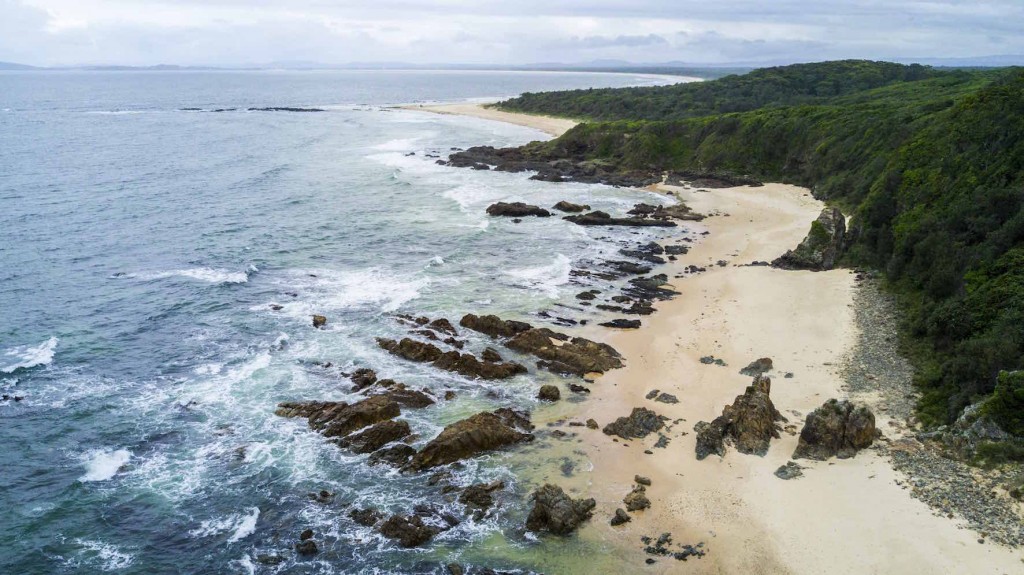