Estuary Perch On Bait and Lure

Estuary perch hold a certain mystique for many anglers despite being fairly common throughout south-west Victoria, where they provide a popular option for anglers. They are a wonderful riverine lure-eating sport fish in an area that lacks such species compared with other parts of the country.

Despite their name, estuary perch (Macquaria colonorum) also spend much of their time in freshwater. Being euryhaline (like bass and barramundi), they are able to function across a wide range of salinities, from saltwater estuaries to freshwater regions. This is an important aspect of their breeding pattern, which means they travel downstream from freshwater to spawn in the estuaries. The perch’s tendency to travel in large groups of similar size to and from spawning grounds can result in brood stock being affected by overfishing. Stumbling across a concentration of large perch (most likely females) and taking a bag limit of five (in Victoria) over a couple of consecutive days could have a severely detrimental effect to the perch population, particularly in the smaller systems. 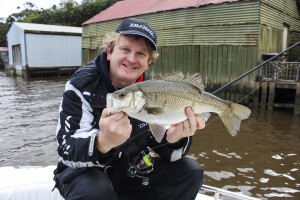 Growth of the perch is fastest during the first four years of life, with most fish sexually mature by then. However, growth levels out substantially after this stage. A study of otoliths – or ‘earstones’ – show that a 40cm female fish is approximately 15 years old; a female approaching 50cm could be close to 30 years old. Male growth rates are even slower, with a fish of 15 years being only around 30-32cm. These findings revealed a considerable increase on measurements of fish scales in the mid-80s that estimated perch lived for around nine years. These latest figures make the estuary perch the longest-lived of the percicthyids of the same genus: the Macquarie perch, golden perch and Australian bass.

Many anglers view estuary perch as a southern version of the barramundi and maybe they need to be looked at in the same way. Most large barra are released as it is now common knowledge that they are the breeding females. With perch it seems the equation is the same. Whether it’s spawning season or not, estuary or freshwater, large perch (40cm-plus) are most likely to be female and need looking after. Much has been written about correct handling techniques, such as supporting the fish’s weight from underneath, and these techniques need to be applied when releasing perch. Anglers who target this species can be important cogs in keeping their local estuary perch locations viable, by being vigilant to unsavoury or illegal practices that may hinder the opportunities for future generations to pursue estuary perch. There is nothing wrong with getting a feed of fish but there are a lot of easier targets that have far less impact.

Studies indicate that 75 per cent of Victoria’s streams hold perch. Many populations are significant, others small. Despite their freshwater travels, most estuary perch are encountered by anglers in the estuarine sections of rivers. Many are encountered by bream lure and fly casters, whose technique is well suited to the predatory nature of the perch. Modern lure tactics are very effective on such an opportunistic feeder as the perch. Fortunately, most avid lure anglers are also well versed in the need to conserve fish stocks. When it comes to bait angling, though, specific techniques for perch and bream tend to be a little different and will be discussed in the next section.

Techniques
Surface luring: Surface luring is an extremely addictive and exciting form of fishing for perch. Optimum surface fishing conditions are smooth, calm water. Fish can be located by listening for the “bloop” sound a feeding perch makes or looking for the surface disturbance. These conditions also help them locate the lure. Low light periods around dawn and dusk are obviously the best times but surface activity can occur any time, particularly on an overcast and muggy day. Conditions don’t always lend themselves to a surface bite, but there are plenty of other ways of tangling with an EP.

Plastics: The perch’s preference for live moving targets rather than static bottom baits make it an ideal target for soft plastic fishing. These lures can easily be fished at a variety of depths, which is handy for locating a fish that could be feeding anywhere from the bottom to the surface. All manner of soft plastic presentations you’d use for bream work on perch but some produce better than others. Minnow-style plastics, such as Bass Minnows and Gulp Minnows, fished with a fairly aggressive hop off the bottom, or drifted slowly through snags, work well. Targeting weed beds and heavily timbered snags such as submerged trees and branches are good starting points if perch are your quarry.

Hard-bodies: All your standard bream hard-body techniques and lures will also produce perch if they are in the same vicinity. One technique that works well on perch, perhaps more so than for bream, is trolling. Perch are more likely to be found suspended higher in the water column than bream, which makes them an easier target when trolling. You don’t need to be quite as precise with matching lure depths to run close to the bottom as you often need to do for bream. Bibbed lures, such as the Daiwa Double Clutch, that have the ability to dive to around 2-3m are best for this style of fishing. 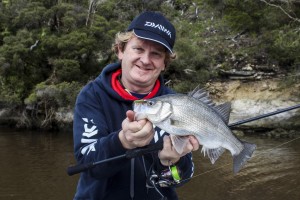 Blades/vibes: This deep-water technique can be a very effective method, particularly in the cooler months when schooled fish can be easily located on the sounder. Perch are fond of sucking down a shimmering piece of plastic or metal, and perhaps the biggest problem using the new small metal vibes is that they really do engulf them, often requiring a delicate operation to safely remove the lure from the perch’s cavernous mouth. This is a good searching technique as you can fish deeper areas, more suited to plastics, quicker than you could using a plastic.

Fly: The advent of the soft plastic revolution has really put my fly fishing on the back seat. However, it was always a favoured technique BP (before plastics!). Many times when fish weren’t responding to hard-bodies a switch to the fly gear would produce results. Wet flies such as Matukas or Dahlberg divers on the surface were the two most successful methods.

Bait fishing: Lure techniques for bream and perch are fairly similar, yet bait techniques for each species are quite different. Being an opportunistic predator, perch find sufficient food in the diverse environments they inhabit. Studies show that perch hunt a wide range of prey at various levels of the water column. Their large, well-developed eyes and grasping, protruding mouth are consistent with an active sight-feeding predator. Estuary perch have always been recognised as suckers for well-presented live bait, but also being steadfast in their refusal of anything that isn’t. This is why lure and fly techniques work so well as they imitate moving live prey.

Traditional bream-style bait fishing, with a dead bait anchored somewhere near the bottom, usually isn’t too attractive to a perch. Live baits presented suspended in the water column are far more effective. One particularly popular bait fishing method is using a live cricket. A bubble float is used as casting weight only and the cricket, pinned lightly through the wings to keep it alive, is allowed to do its seductive dance on the surface, attracting any hungry perch in the vicinity. Late summer and early autumn is the best time to try this technique with calm, low-light conditions producing the best results.

Sub-surface live baits such as minnows, small mullet and shrimp are best fished either under a float or with a paternoster rig so the bait is suspended in the water column, rather than lying on the bottom. Pin the baits on the hook as lightly as possible to keep them alive for as long as possible. 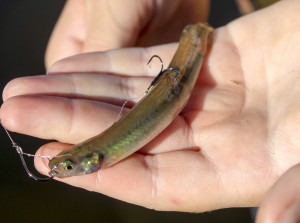 Tackle
All your favourite bream luring gear or bait fishing gear is perfect for perch. However, in some situations a long rod with a fairly solid-action helps. Imparting surface action and taking up slack line quickly, reaching weed beds on the opposite bank, keeping a fish’s head up and out of underwater snags or bankside weed beds are all times when such a rod works well. Leader strengths depend on nearby structure, but slightly heavier than you would use for bream is a good starting point.

Fact box: Fisheries Victoria perch stockings
Fisheries Victoria holds ‘The Great Perch Search’ annually on the Hopkins and Glenelg rivers, in south-west Victoria. The purpose is to collect running ripe estuary perch that are used as brood stock to produce EP fingerlings for stocking. Previous research has shown that the most effective way to collect these fish is to enlist the help of experienced lure anglers to catch the fish as this minimises the trauma of the collection, as opposed to other methods such as netting or electrofishing. The fish are held in the livewells of anglers’ boats then transferred to special holding pens. They are then sorted by fisheries staff, packaged and flown to the breeding facility in Narooma, NSW. Last year was the sixth time the event has been held and through the work of the project more than 500 000 estuary perch fingerlings have been stocked in 12 different waterways throughout Victoria since 2012. Being a slow-growing species it will take time before successful fisheries are established but the indications are the program is beginning to bear fruit. Hopefully, in a few years Victorians might be experiencing something similar to what our northern fisher folk experience with their impoundment bass fisheries. 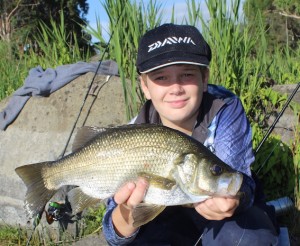