Wherever estuary perch are found, whether it be in Victoria, South Australia, Tasmania or the estuaries in the N.S.W coast, they are a charismatic and elusive species. Modern day anglers, often hear ‘old timers’ speak in very hush terms of estuary perch, how to catch them and where to catch them. In this day in age, we as keen anglers are willing to target more and more species on light gear and estuary perch are on the hit list for modern day sport anglers. 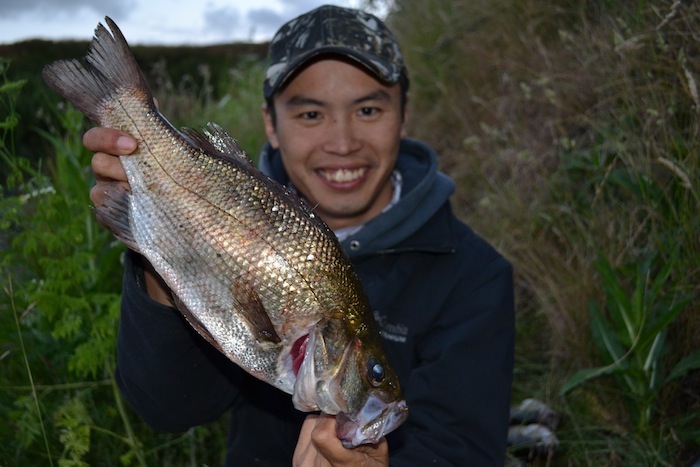 Traditionally, estuary perch are targeted with live baits suspended under a float, with baits such as live minnows, shrimps, black crickets and pod worms (similar to sand worms). They have also been known to take fresh cut baits such as mullet and Australian salmon, intended for mulloway. This is when the trophy estuary perch are incidentally caught by anglers. With the advent and ever increasing popularity of lure fishing, many modern day sports anglers are often crossing paths with estuary perch, but very few specifically target them. In the scientific world, there is little known about estuary perch. We know that they are an incredibly slow growing species, and in turn they are a prized capture and anglers target them year round.
To physically look at an estuary perch, they look very similar to the Australian bass, with a few discrepancies that can help anglers distinguish between the two. On an estuary perch, the main features that differentiate them from Australian bass are the jaw; estuary perch have a protruding jaw (it is a bit longer than the upper jaw), whereas Australian bass don’t. Secondly, estuary perch have a dished (like a dip/indent) on the top of their heads whereas Australian bass have a straight head. Lastly the other give away is that estuary perch are generally more deeper bodied than Australian bass. Looking at the eyes of an estuary perch, they are quite large, which suggests they are a more nocturnal predator, and are more active at night. Also, they have a large ‘bucket’ mouth, which implies they are ambush predators.
They beauty of chasing estuary perch is that it can be efficiently done land based, on a boat and can be targeted day or night. On a boat, targeting perch is more efficient as you cover more ground, and with modern day electronics such as sounders and electric motors, anglers can target them a lot more efficiently by sounding schools of fish or baitfish.

Where and when
The beauty of estuary perch is that they are an all year round target. You will be surprised at where you can locate estuary perch. In many estuarine systems state wide, they can be located from the mouth of the estuary right up into the fresh water reaches. It is true that at certain times of year they are found either in the fresh water or estuarine components of the estuary, as they need both fresh and estuarine waters to complete their life cycles. However, there are certain “elements” that will help you allocate estuary perch. Seeking out hard structure is a great place to start. Whether it is natural submerged logs, cliff faces, a single boulder sticking out of the water, or artificial pylons, they all have the potential to hold big residential perch, or schooling perch. Secondly, I have found they have an affinity for weed beds! To better your chances of locating them, it is best to try and locate weed beds that coincide with drop offs and channels. Estuaries where reed beds are lining the bank will often hold perch. I have also found just blind casting and prospecting mud flat bottoms, flats, channels, and drop offs (similar to how you would prospect this type of ground for bream) can also produce fish. Lastly (and I was also quite surprised myself) the presence of artificial lighting at night; as these lights often attract bait fish, this will in turn attract predatory fish such as estuary perch. Times to fish for perch: the old saying that dawn and dusk are best definitely rains true for chasing estuary perch. I have found fishing an evening leading into night has resulted in better fishing, however I have caught good perch during the day, especially around snags and artificial structure. With a lot of anglers fishing with artificial lures, they are incidentally coming across more estuary perch. If this happens, simply try to stick with the school and sort out small fish to get to the larger fish. 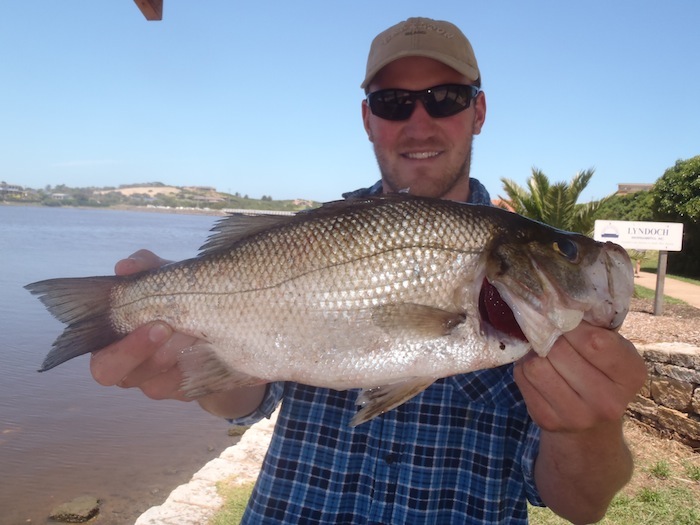 Rods and reels
Most anglers adopt their bream outfit, which is fine for most estuary perch applications. I generally use a seven foot graphite rod, which is quite stiff (fast/ultra fast taper) and matched with a 2000 sized reel spooled with 8 -10lb hi-vis braided line. The hi-vis line provides me with a greater understanding of where my lure is and this is beneficial when targeting perch as if you give big perch just an inch of slack in tight skinny water, kiss your catch and lure goodbye! I use fluorocarbon leaders, which most of the time is of 8lb breaking strain, which provides great abrasion resistance against the sharp set of gill rakers found on estuary perch. If they turn and you have light leader, it will cleanly cut you off, and if not handled with caution, can give you a nice cut also. When casting hard up into snags where it is relatively deep and open, I utilise 12lb leader to offer me a bit more abrasion resistance in case the fish decide to head for home. Specifically in fresh water reaches, where the water is skinny and littered with snags, I apply heavy drag settings to pull fish out of snags. In this case, I don’t muck around and use a 3 – 6kg rated graphite rod, which is once again fast/extra fast in taper, to give me the bottom end grunt to manoeuvre and have control of my fish. I match this rod with a 2500 sized reel, I use 15lb leaders, and apply a lot of pressure to pull fish from the snags and keep them from getting there. With heavier drag pressures you do run the risk of pulling the hooks so it’s always a trade off and this is what makes this fishing so exciting. 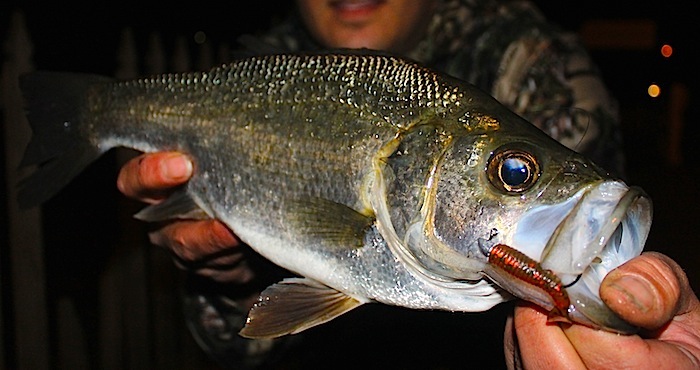 Lure Choice
The key is finding good active schools of estuary perch, therefore my choice of lures is dependent on the scenario. Predominantly I love prospecting potential estuary perch spots with soft plastics, which are green, brown or white in colour, and a simplistic minnow pattern. Grub tails or paddle tails there is honestly no preference. The soft plastics are generally weighted with either 1/24 or 1/16 oz jig heads. I choose soft plastics over hard bodies when searching out potential spots as soft plastics enable me to cover the whole water column, and it is cost efficient if you snag up; which in turn is a lot more efficient when trying to locate them. I use this technique when the water appears to be relatively deep. The beauty of this method is that if estuary perch are sitting in the mid water column, as the plastic sinks down they generally inhale it. In deep water I generally use the hop/sink technique, which consists of sinking the plastic down to the bottom, and hoping it back two or three times and letting it sink back down. Also, where the water is deep I also utilise vibe style lures to help me locate schools of perch. When the school is located, I hang on them, and then it’s just a matter of putting up with the small fish and eventually a big fish will take the lure. If estuary perch are not located within 5 minutes of casting, I move on to cover more ground until I find them.
Over weed beds and shallow mudflats, I generally employ one of two retrieves. I use a light jig head 1/32 oz in size, and slowly twitch them back 4-5 times, with plenty of pauses. Secondly if they are higher up to the water column (i.e. close to the surface) I employ a quick start stop retrieve. What this consists of is a series of quick erratic jerks of the rod, then a dead stop and pause for 5-6 seconds, then simply repeat. The idea here is to mimic a fleeing bait fish, and generally this retrieve entices a reaction bite from estuary perch. If attempting this retrieve, don’t be put off that the plastic blows out of the water. The use of shallow running hard bodies over weed beds and shallow mudflats also works well. Whether perch are in the shallow waters or feeding on the surface, estuary perch are ferocious predatory fish, and will smack just about anything you offer them, whether it be soft plastics, diving hard bodies, surface lures or flies, when you see them ‘boofing’ on the surface, you know you are in for a good session. When I work my hard bodies for estuary perch, I simply adopt a bream retrieve (dependant on the type of hard body).
When fishing from a boat, one of the most efficient ways to locate estuary perch is trawling a mix of hard bodied lures, with a mix of shallow, mid and deep diving hard bodies. Don’t be afraid to utilise large lures that range from 50-80mm in size. Basically if it has half a chance of fitting in the perch’s gob, they will have a crack at it. Once located, anything goes! It’s just a matter of getting your offerings in front of the fish as nine times out of ten they will eat it. Experiment with different weighted plastics or diving hard bodies to get them down to where they are, and success will come to you. The recipe for my success is first and foremost locating the schools of estuary perch, and then it’s just simply a matter of filtering through the small ones to get to the big ones. I have also found that the theory of releasing estuary perch after capture shuts the school down is feasible 20% of the time, however I have found that if you locate a good, active feeding school of estuary perch then releasing them does not put the school off.
On a final note, keep persisting to you get them!