It’s been a 37C day and some people suggested it was too hot to go fishing (That was me-Ed). Well, I thought otherwise and now I’m sitting at the computer after a day of highs and lows chasing trout in a couple of High Country streams in North East Victoria. At this point of the day, I smell like a pair of waders that haven’t been washed in three years and not even the cats will come near me.

Sure, it’s not a pretty thought, but that’s all right, it’s all part of the fun that is summer trouting. It’s going to be hot, you’re bound to sweat and the fish are certain to be looking up. So that means it’s time for dry flies, especially terrestrials, making this possibly the most exciting time of the year to chase trout in rivers and lakes around southern parts of the country. 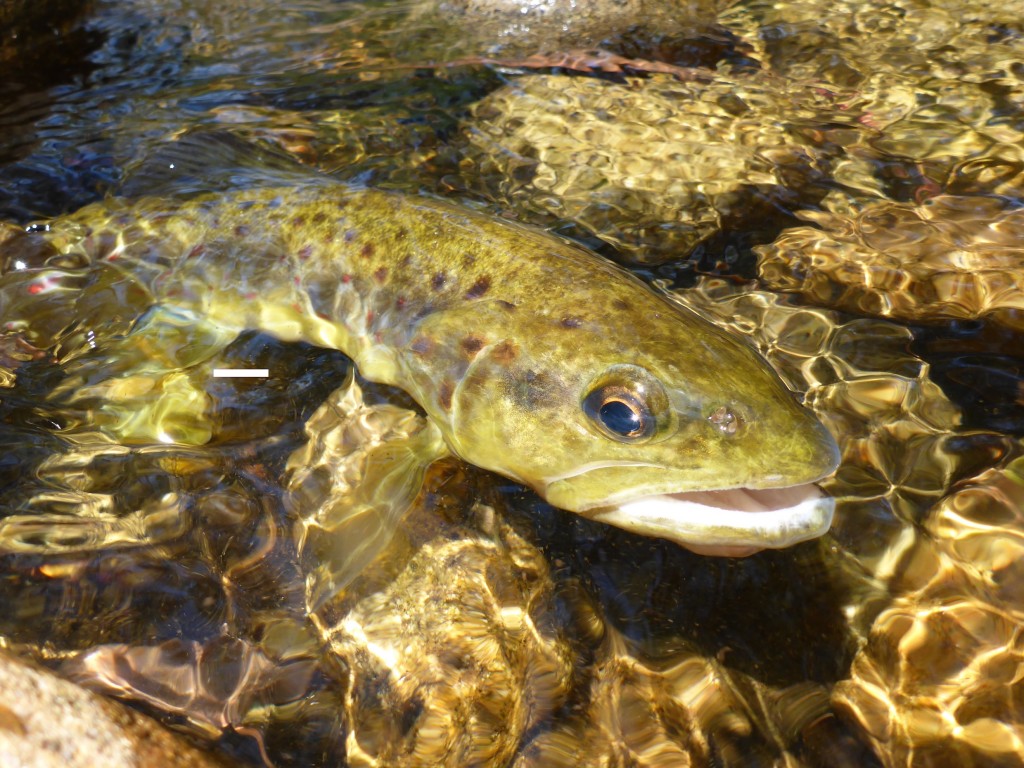 Considering conditions
The Australian summer can be a harsh time of year. It takes its toll on both anglers and fish, so you need to consider how the fish are dealing with the heat and adjust your fishing locations to suit. Trout naturally need lower temperatures so the water can have a higher oxygen concentration. This is why you don’t find them in waters north of Sydney; it simply gets too hot for them to survive. And this needs to be considered when fishing in summer when both air temperature and water temperature in our waterways.
Because of this, most smaller streams – where low water levels prevail in the summer months due to a lack of rainfall – can get rather warm. Even spring creeks that run cold in the High Country rise in temperature once they have weaved their way downstream, with the Australian sun slowly warming the water in the shallow areas. So, if you are searching for trout in the summer, the most important thing to remember is that they will be relocating to cooler waters, and that means heading upstream. 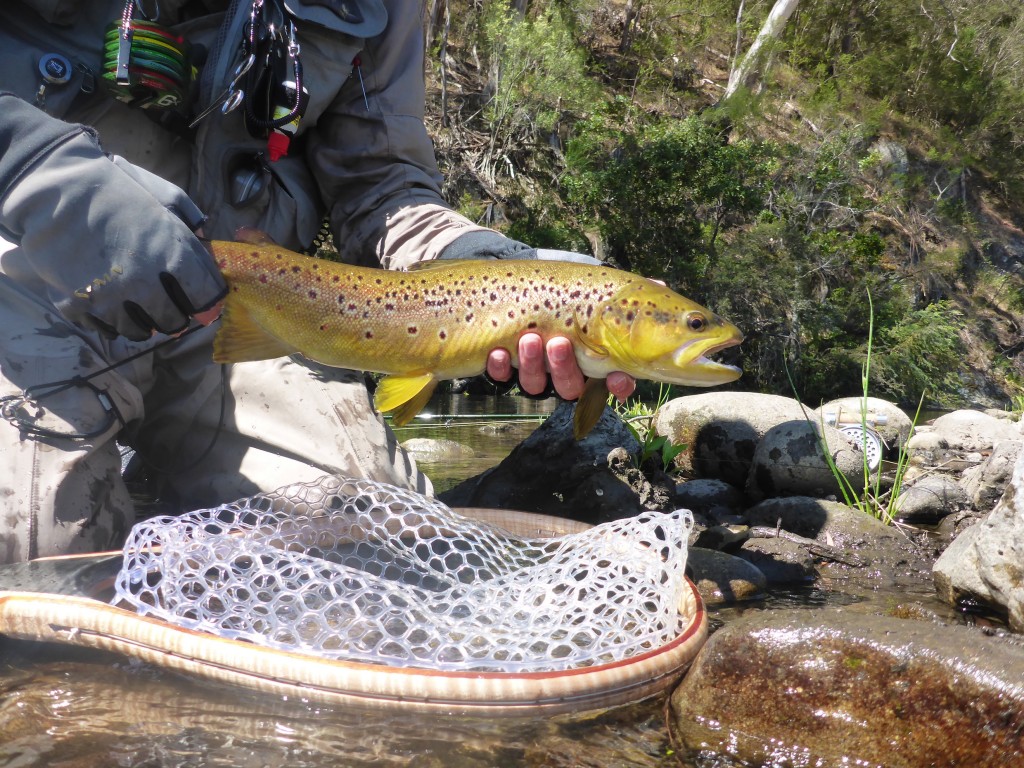 This affords you the opportunity to get further into the bush and explore new water that you may not have previously considered. Higher up in the little streams, where you would usually expect to find only a few small fish, you will often find some really good-sized trout holding in the deeper pools that develop along the watercourse.

But you need to be cautious in your approach to each and every pool or riffle run you come across. Lack of rain generally means clearer waters, which makes it easier to spot fish, but it also makes it easier for the fish to spot you, and they will be looking up for a feed.
Every approach needs to be made with hesitation, keeping low and avoiding quick movements. There is no point casting at a pool when the fish already know you’re there and have gone into hiding. This also goes for your fly and line placement. If you cast to the very top of a pool or run straight away, your line is likely to spook any fish in the lower sections, before you even get to present to them. They can be easily scared in summer, and don’t need much of a reason to go into hiding. So, start at the bottom of the pool and work your casts up through the likely areas, targeting the bubble line and submerged structure. Once you have covered the entire pool, if you haven’t had a strike, it is likely you’ve spooked the fish and there is no point continuing to cast at it. Move on to the next pool and start the procedure again.
There are a lot of fish in a lot of small pockets of water in mountain streams, so try not to get too fixated on one pool just because it looks “fishy”; you’re just missing further opportunities upstream. 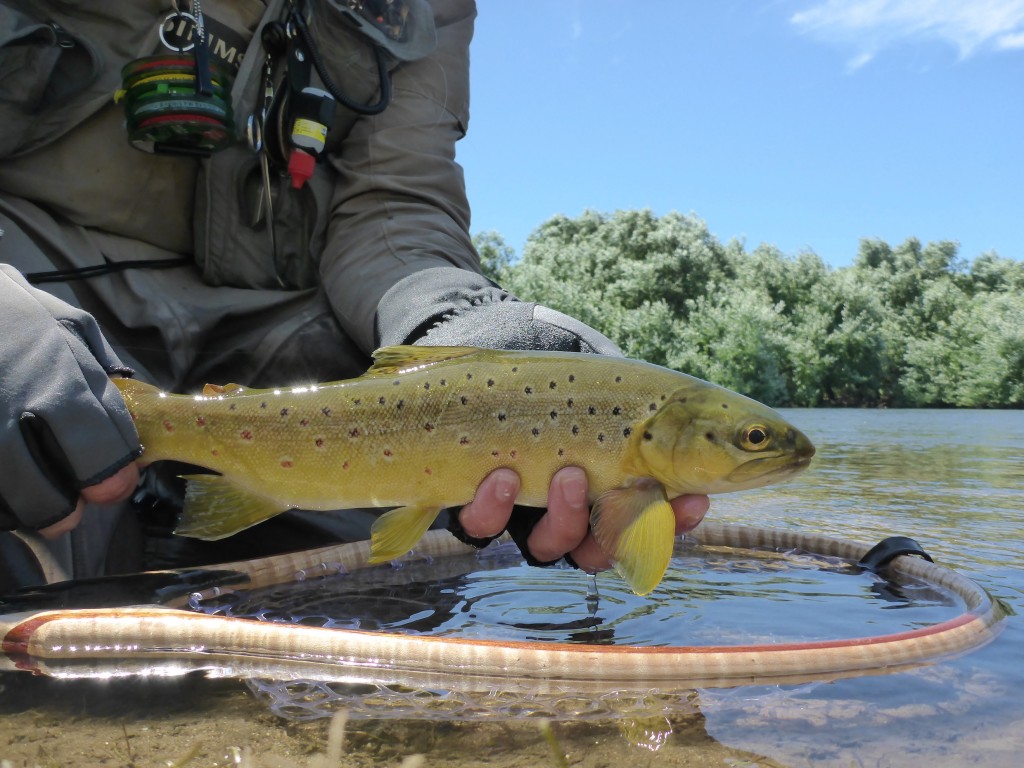 The other side of the coin – tailrace rivers
Warm water and low stream flows are not always the case in summer, though. There are a few exceptions found in our tailrace rivers, where flow is controlled by a dam upstream and water release is determined by agricultural needs downstream. The Goulburn River in Victoria is a classic example of how a tailrace river doesn’t behave according to nature. In winter, it generally runs very low (as little as 200 mega litres a day), meaning there is little water for the fish to hide in, and right in the middle of spawning season. As the weather warms up and rainfall declines, more water is released into the river to meet farming needs. So, it essentially runs in reverse to any mountain stream.

In summer you get current flows of up to 9000 mega litres per day, with cold water that has come from the depths of a lake and the perfect conditions for trout. This means plenty of oxygen, plenty of cool water and plenty of bugs for them to feed on. It does, however, affect the hatches of insects that trout usually feed on, with the higher, cooler waters failing to trigger hatches in certain insects. 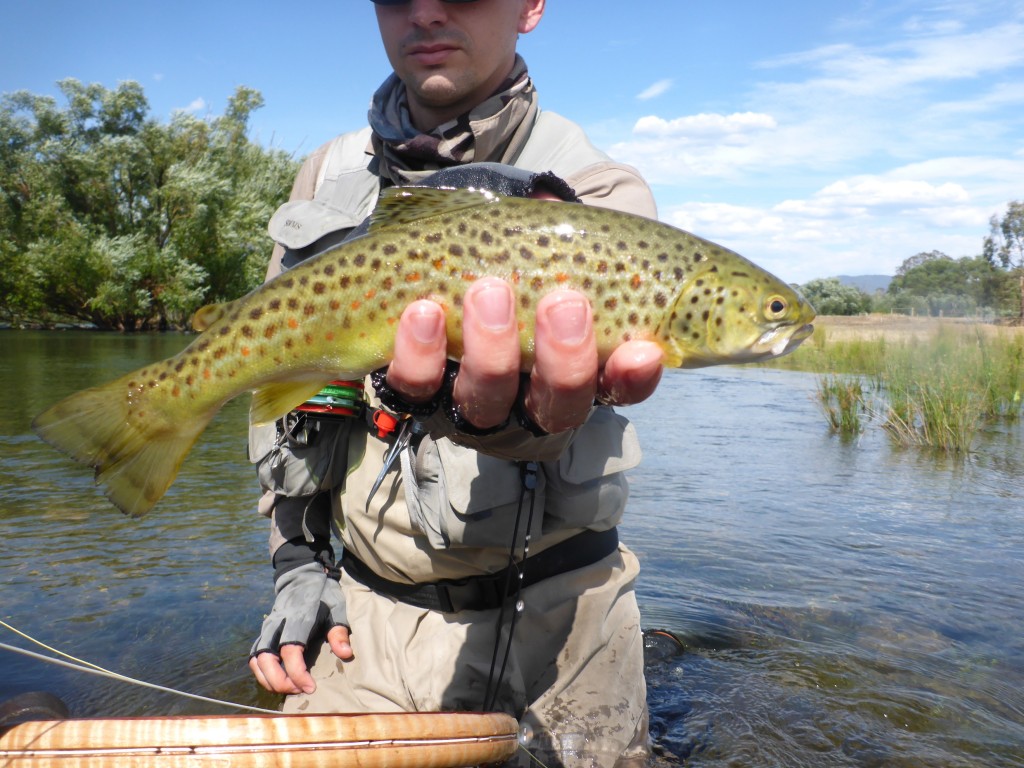 As these higher waters mean stronger currents, the fish need to save their energy and so tend to hug the backwaters, or under the banks, along the edges where the current isn’t so strong. Although you will find some fish in the current seams and headwaters of riffles, most are likely to be lying low in the backwaters, so a new approach is needed. This is where stalking trout is a lot of fun and, if careful enough, you may find yourself standing right over fish, able to watch their every move before presenting a cast. It all comes down to patience and how prepared you are to stop, wait and look.

There are often times when I’m walking the edges and can’t find a fish anywhere. This is usually not for a lack of fish, but more due to me not looking properly. The best thing you can do is put down your rod and don’t think about casting. This forces you to stop and look, instead of trying to place a fly on every inch of water. The same goes for lure fishermen: reel it in, and simply watch the water for a while. 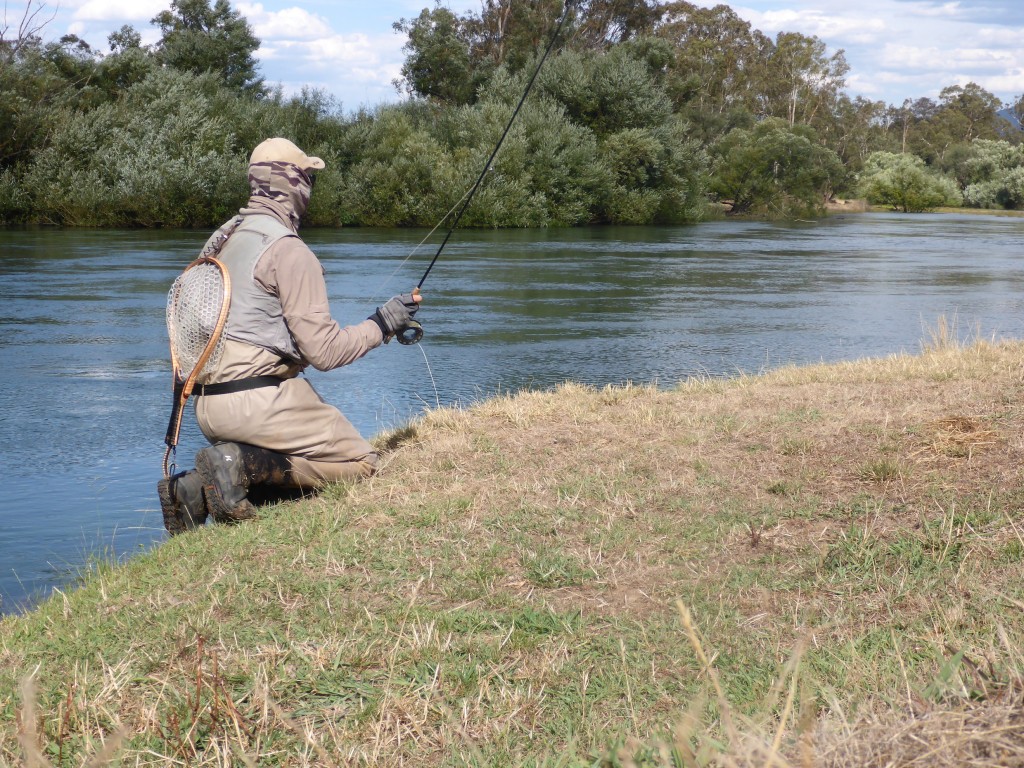 When you stay still and just watch you will often be very surprised. Shadows you hadn’t noticed begin to move, and trout working their beat come into your line of sight. Remember, most trout will stick to a defined section of water and work a beat searching for food. If you watch a potential section of water a few minutes, you will often find that trout coming back to where it started. Once you have found your target, it makes it a lot easier to catch than just casting to water hoping a fish might be there.

Extraterrestrials
Larger rivers usually flow through grassy farmland, which brings into play a new element of surface fishing that really makes summer the most exciting time to chase trout. I am talking about terrestrials. This season, grasshoppers began to appear early, with the fields starting to rustle in late October, so by the time we have reached the height of summer, they are everywhere. So, too, are beetles, often falling in the summer evening along with cicadas and willow grubs. You need only to step out of your front door on a summer evening and listen to the cacophony going on to know this is a special time for insects. And the trout know it, too. 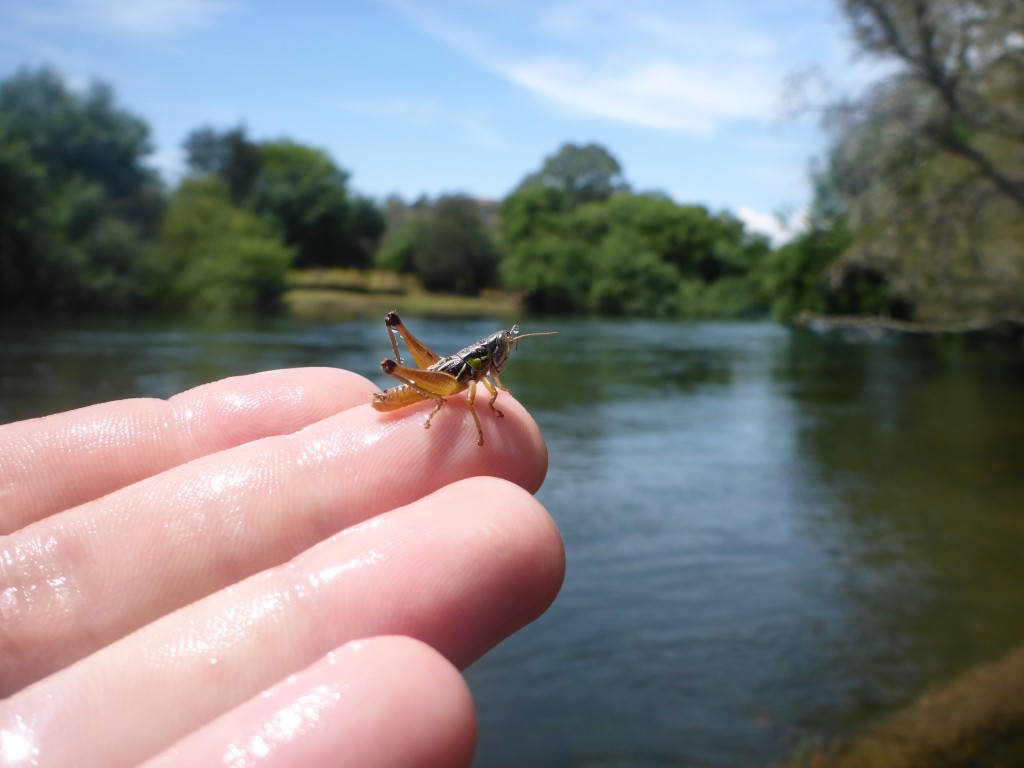 What fish could resist an easy meal like a big, fat grasshopper that has been blown into the stream with a gust of wind? This makes for some very exciting fishing as the fish will often aggressively take terrestrial insects from the surface, even big cicadas, and do so repeatedly. What this means is that casting along the grassy edges to rising trout with a hopper pattern will often result in big fish coming up for a meal. Even when they aren’t very active, a hopper can be a great searching pattern along the grassy overhangs where trout are likely to lie.
When the wind picks up a little, this plays into the angler’s hands as more land-based insects get blown into the river. Terrestrials do not go through the hatch process of waterborne insects, so trout are not turned on to feeding patterns by emerging nymphs. Instead, it is the “plop” of a large insect hitting the surface of the water that triggers trout to feed.

Because of this, drifting a fly a long way into the path of a feeding trout does not always work. In fact, casting so the fly lands almost on top of the fish, or even just behind, will often result in the fish turning to chase the insect downstream, having not seen the line overhead. This is especially so when willow grubs start falling from the trees. Casting in front of trout is almost guaranteed to spook them, but a cast that lands a grub behind the fish will see them turn and give chase.

All in all, whether you are trekking high into the alpine areas in search of cool mountain streams, or challenging yourself on the faster-flowing waters of the tailrace systems further down, you can be assured that there is no fishing like summer fishing when it comes to chasing trout. Just be sure to take care of yourselves. Keep hydrated, always let someone know where you are headed before you go fishing and keep a watchful eye out for snakes.
In Australia we have a great selection of venomous snakes and, unfortunately, they tend to live around our lakes and streams. Plus, they get rather active in the summer, moving faster as their blood warms up and often becoming aggressive as they move into mating season. So, always carry a first-aid kit and, if you are heading into the High Country, a personal locator beacon. Plus, be well aware of the correct procedures for dealing with a snake bite should you ever have to. A little bit of preparation isn’t that hard and could save your life.