getting into kayak fishing 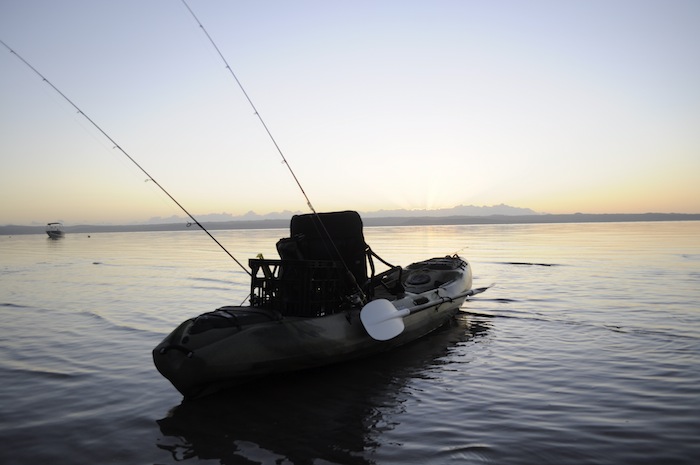 I relate kayak fishing to another hybrid sport – wind surfing.  Take two perfectly good elements, surfing and kite flying I suppose and mash it into some connected sport.  Much is the same with kayak fishing although it’s a little simpler to see where this came from.  Some bloke out on a hollowed out tree trunk thousands of years ago thought he’d see if he could catch dinner while out paddling around.  Between then and now there have been vast improvements to both kayak and fishing gear nonetheless the sport remains much the same – catch fish from a self-propelled floating craft.  I have been kayak fishing for quite some time, starting off at the local swimming hole on an old surf ski, a handline and some garden worms but fast-forward say 20 years and here I am still doing it and loving it even more.
What kayak for me? 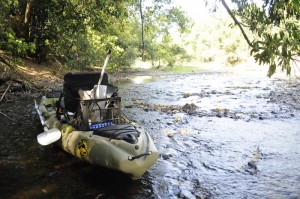 If you’re thinking about getting into kayak fishing chances are you are either an experienced kayaker or an experienced angler.  I say this because I haven’t met many people who just out of the blue decide to take up kite surfing without either surfing or wind sports experience; the same is true with kayak fishing.  For those that have a kayak, it might be time to look at how well it is suited to fishing or how well you can set it up.  For those fishermen looking to open up their options a little by way of a kayak we will go through myriad choices available.  Lets start off by looking at the two traditional types of kayaks available – one being a sit in kayak and the other a sit on.  A sit in varies to a sit on by looking more like a small canoe that the kayaker sits inside and are level with or below the waterline inside the kayak.  A sit on can be looked at like a big plastic balloon, that is to say you are sitting on top of a moulded bit of plastic that has a large air pocket under you.  A sit on will generally sit markedly higher in the water due to this fact; this will come in a little later regarding their various applications.
Sit in kayaks don’t differ too much from one another mainly just sizes and every one I’ve seen is paddle only.  It’s the sit on kayak that has really been experimented with in the last few years and now come in paddle, peddle, sail and power varieties.  Companies such as Hobie and Native Watercraft offer peddle options which really frees up the hands for holding rods.  Hobie again offers a sail kit with most of their kayaks right up to the big Hobie Adventure Island sailing fishing kayak with peddles as well – one serious bit of kayak fishing kit. 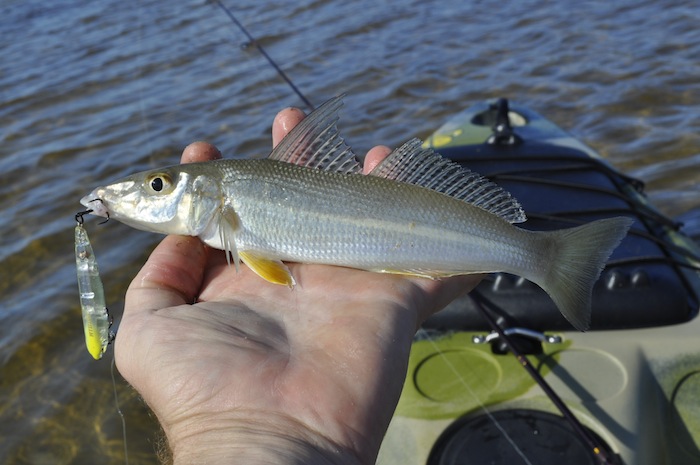 The type of water you fish most, or want to fish most will generally dictate what kind of kayak you will buy and vice versa if you already have a kayak.  Sit in kayaks, due to their open tops are susceptible to water turbidity and taking a wave over the bow could leave you bailing out water or overturned and trying to drag a kayak full of water to the shore minus some fishing gear.  Sit in’s come into their own in small water – rivers and creeks where chances of waves are slim.  They are generally small enough that you can drag them over rocks with ease and sitting lower in the water enables paddling under low hanging trees and branches while catching less wind.  Sit on kayaks are made with self draining holes called scuppers.  These holes as well as providing a level of stability by allowing the kayak to sit evenly in the water, allow any water taken on board to drain back through the holes easily to leave you with a dry deck.  If you are thinking about traveling fair distances in the kayak either getting to a quiet fishing spot of trolling up and down a river or estuary for example it is worthwhile considering the method of propulsion.  If you find yourself tired with paddling all day it may be worth considering a sit on top kayak with peddle propulsion.  Hobie kayaks utilise a peddle system called a Mirage Drive which is modeled on the flippers of a penguin, so they effectively flap underwater creating forward propulsion.  The Native Watercraft brand of kayaks use a more advanced propeller style peddle system driven by a chain from the peddles giving this kayak the option of going forwards or reverse.  In my 20 odd years of kayak fishing utilising both paddle and peddle I would have to say having your hands free to flick lures around is a massive advantage.  If it is the wide open ocean you seek, a slimline long kayak should be your weapon of choice.  There are a number of manufacturers that make dedicated offshore fishing kayaks including fiber glass models.  The Hobie Adventure Island I eluded to before is one such dedicated offshore machine with a large sail, with the ability to turn it into a trimaran with trampolines either side of the seat it really hits the pinnacle of today’s offshore kayak fishing vessels.
I have had all manner of kayaks starting off with what would considered to be a kids kayak that I used for fishing, to a dedicated fishing paddle kayak to what I have now – a dedicated fishing kayak that is peddle driven and the size of a small boat.  My partner likes to join me sometimes so we got her a sit-in kayak, which conveniently doubles as my skinny water yak. 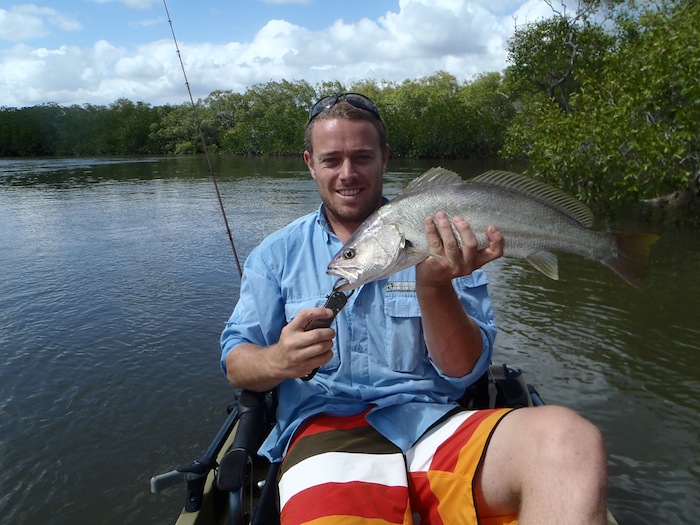 Safety
I once saw a shirt a base jumper wore which read “safety comes third”.  It might not be a very big issue if you jump off cliffs for a living but we mere pedestrians value it quite highly.  Safety in kayak fishing is really two fold, safety from fishing and safety from kayaking.  On one hand there are sharp trebles and hooks swinging around and the other you are keeping balanced on a piece of plastic in the water.  The issues compound greatly depending on the weather.  Personally I don’t wear a personal floatation device (PFD), it’s not a requirement in QLD to wear one in the waters I frequent and I don’t feel comfortable in them.  Coming from a surfing background I could think of nothing worse than being tossed around in the waves without being able to duck dive under them – having said that, however if I was venturing far offshore it would be the first thing I would pack.  If you feel comfortable wearing one then I recommend one to no end, they can prove invaluable if say you become unconscious and end up in the water.  Some States and Territories may have different requirements so check them out before casting off.  Moving on from the obvious, there are more subtle safety measure one might need to think about while out kayak fishing like anchor releases, knives, clothing and paddle tethering.  A little research on these items will expose you to a wealth of knowledge and ideas. 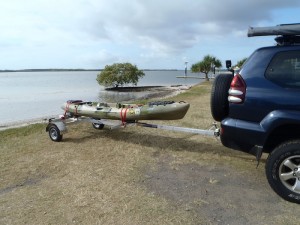 The fishing gear I use is not very different to what I use when land based or fishing from a boat.  Obviously you are a little more limited to the amount of gear you can carry in a kayak so you should really think about where you will be fishing and the species and size you think you will encounter.  I generally take a 1-3kg rod with 1500 size reel for small hardbodies and surface lures, a 2-4kg rod and 2500 reel for medium hardbodies, plastics and larger surface lures and depending where I’m heading I might take a 2-4kg overhead rod and reel for throwing bigger lures for jacks etc.  I have found that this gear will stop anything that has come my way so far but I live for the day when I’m under gunned on this set up.  My lure choices are determined by the waters I’m fishing also, there is no point taking a little bream lure offshore or an 8m deep diver onto the sand flats.  I generally have 2 tackle boxes filled with lures to suit the occasion and most times I will take out something like 3-4 packs of different plastics and jig heads.  If it wasn’t for the size of my kayak I could see how this much gear would start to crowd the deck let alone adding sounders, lights and all manner of equipment. 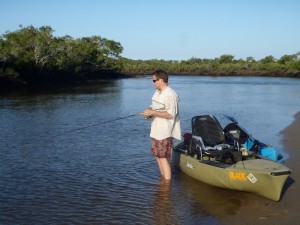 I consider myself quite the tinkerer, can’t leave something alone without modifying it one way or another.  The first kayak I frequently used seriously was that little kiddy yak which actually went quite well considering.  I modified this to include rod holders and some straps for storage.  After a few years of putting up with this little thing I bought a larger Jackson Coosa.  The Coosa was a great paddle yak and once I installed Scotty rod holders and a fish finder the Coosa was a paddle yak fishing machine that gave me many weekends of fishing.  Considering the amount of distance I was traveling each outing I decided something easier to move was on the cards and upgraded yet again to my current Hobie Pro Angler 12.  To date I have installed a Scotty rod holder, a Lowrance Elite 5 DSI sounder/GPS unit on a quick release adjustable RAM mount and have recently built my own sail.  One you start modifying a kayak it really is hard to stop due to the ease and relative cost.
Capitalising on the booming kayak fishing sport companies are starting to offer some very innovative products.  For instance a few companies have come up with a dedicated kayak electric motor which in some instances can be attached to a rudder or dropped down the peddle well of Hobbies.  If I get my way I would also add a Hobie Tandem Island to my fleet, allowing me to take out my partner sailing and fishing all day – I might have a bit of work ahead of me to get that one approved however.  All these ideas of sails and electric motors are helping kayak fishers get further and go longer under relative green power while having a minimal impact on the environment we utilise.

Further reading
The internet holds a plethora of information on kayak fishing.  There are a number of worldwide kayaking forums and sites, but in Australia if you want to talk and meet with like minded people – Kayak Fishing Down Under (www.kfdu.com.au) and Australian Kayak Fishing Forum (www.akff.net.au) are some top places to visit.  The friendly folks post everything from fishing reports, planned trips to kitting out their kayaks and rod building.  All there is left to do is get out and have a paddle.