Well it’s summer time and half the country is going to be hell bent on chasing kings! Everyone loves kingfish. They look great, taste great, fight great and you can catch them a million different ways. One very effective way of targeting this amazing fish is by using a downrigger. Most boats aren’t equipped with downriggers and this can sometimes be due to perceived financial cost or a lack of knowledge on how to effectively install and use them. Downriggers are an amazing tool that can take your fishing to a new level and get you hooked up in places and at times where you never would’ve bothered even trying. Read on as we give you the low down on downrigging for kingfish.

What is a downrigger and what is down rigging downrigging?
A downrigger is a device used when trolling. It consists of a horizontal pole which supports a large weight via a cable. A release clip attaches a fishing line to the cannonball weight. The bait or lure is attached to the release. Downriggers consist of four major components, the weight, cable, pole or boom, and the spool. A fishing line is attached to the downrigger cable by means of the release clip. The weight is normally a two- ten kilogram mass of lead which is connected to the cable. The spool is brought up either by a manual crank or via an electric motor.
Downrigging is a fishing technique used to set a bait or lure at the depth fish are operating – as shown by previous experience, or by marks on your sounder. Predators like kingfish, Spanish mackerel, trout and marlin hold deep in the water column, either over structure, bait schools, or on the thermocline. Downrigging offers an accurate way of targeting these fish without the use of heavy weights attached directly to your line.

It’s not just trolling deeper. Effective downrigging means integrating with what’s showing on your sounder to present a bait or a lure at the optimum depth to prompt a strike. In the case of hard fished waterways the predators are still there, no matter how busy things get. In times of heavy boat traffic or bright sunlight they stack up around structure and wait for things to settle down before resuming hunting. Downrigging can remove the time of day factor from fishing because many apex predators are unable to resist a bait presented in front of them – even outside primary feeding times. 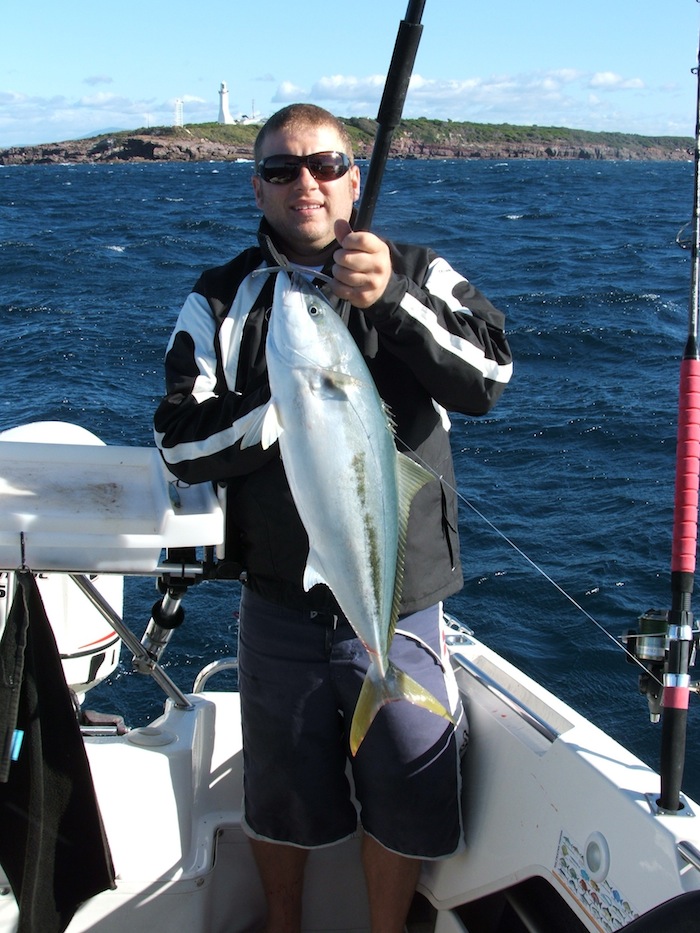 Finding fish down deep
There’s no secrets. The best way to locate when and where they’re biting is by checking the online forums, social media, talking to the bloke at your local tackle store and even stopping by the boat ramp on a Sunday afternoon to see what fish frames are in the bin. When hordes of small kings arrive on the inshore reefs they usually stick around. The bigger fish, 15 kilos and up, travel in small pods. Often the first blokes to know they’re around are the spearos. Don’t be afraid to just head to an aea you have heard they are congregating and start sounding around. A fisherman that can only fish a “mark” or a certain location is a limited fisherman. Learn how to use your sounder and GPS effectively and you will find fish.

Setting up for downrigging
I personally got my start fishing on the Great Lakes in the USA. Freshwater, glassed out seas, day after day, no structure, and with petrol at a $1.20 per gallon, a 25 foot boat was a small one. The fish – king salmon – held on the thermacline, where the water temperature and oxygen content made them most comfortable. Once we found they were at, say, 42 feet, we pretty much trolled at that depth all day. That’s not relevant to Australia, and neither are the downriggers designed for that purpose. Over here we have rough seas, salt water, small boats, and of course rough, reefy ground over which we’re fishing. What’s needed is a powerful sturdy downrigger which can take a few knocks. Preferably, with a long arm to keep your line and cable well clear of the prop, especially on a tight turn. Our downriggers are designed for Australian conditions and check all the boxes.

Tackle required for an average 65-95 centimetre kingfish is nothing special. A 5’6”to 6 foot rod, rated for 24 kilo line. Parabolic action, so that on a good one you can feel the rod flexing right through the foregrip. Forget two stage and progressive action rods. Forget broomsticks and heavy stump pullers, unless you’re specifically targeting known large fish. You can read so much into rod tip movement but not when your broomstick can’t convey information. The reel can be either a quality spinning type in the 4500 – 6000 range matched with 50-pound colour change braid. Overheads are fine and in some ways better, a ratchet being a big help in earlier identification of a strike.  Connect your braid to a three metre leader of 80-poud fluoro carbon or mono using an Albright or PR knot. 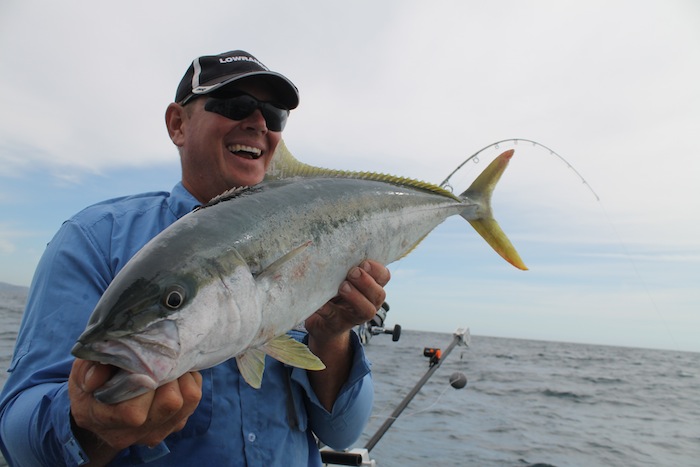 Hook selection and set up depends on target species. For live yellowtail, slimey mackerel and the like a short shank 70 is the go. Use a bait needle and a size 18 rubber band to bridle the live bait. Braid has no stretch and every movement of the boat is transmitted down the line to the baits’ nose, with the leader and the rod tip being the only agents of shock absorption. A rubber band will keep your bait fresher and stronger so much longer.

Never pin the hook directly across the nose or vertically through the jaws. Through the jaws will interfere with the flow of water across the baits’ gills. Through the nose means your bait is already unstable because the hook itself is out of balance. The shank side is heavier than the point side, and that will show up if your troll speed starts to max out your bait’s stability limit.

For live squid you will need a s 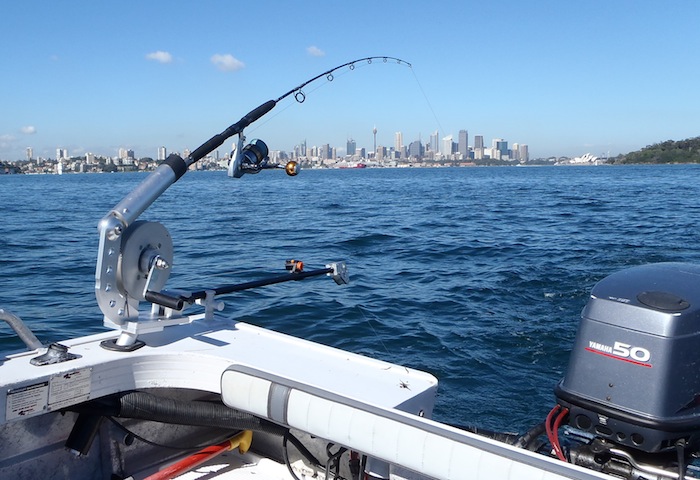 lider rig. To make one, crimp a treble on the end of three metres of 80-pound mono or fluoro leader. Then cut a 20mm piece of tube – the sort used to attract whiting is okay. Run a 7/0 hook onto the line so that the tube passes through the ring and along the shank. Bind the tube to the hook shank using an old piece of light braid., and finish off the binding with a couple of half hitches. Your 7/0 hook will now slide – not too easily – up and down the leader, making the distance between that hook and the treble adjustable. When you’re about to use a live squid for bait, slide the hook so that the bottom of the gape goes through the top of the hood, and the treble and one barb on the treble goes lightly under the skin between the squids’ eyes. The benefit of this rig is that squid is quite a soft bait and the head can be torn away from the hood during a strike – particularly if heavy drag settings are used.

Give it a try. Big investment is not necessary to start. One tip: keep an eye on the drag factor. Anything added to the business end will increase drag, meaning your lure or bait will rise higher in the water. Avoid bulky release clips, heavy braided steel cable, lures with large bibs and even monofilament line. Stick to braid on your downrigger cable – the lightest you can get away with. Use narrow profile release clips and lures with small bibs, for trolling. You are already controlling depth, so deep diving lures aren’t needed. For fish that slash at the bait, rig a stinger treble. Load the rod tip by tightening the drag then dropping the weight a little. As the fish pulls the lure from the clip, the spring in the rod will drive the hook home. For trout trolling consider a floating lure. Knock the boat out of gear and the lure will rise in the water column. When the boat is put back in gear it will dart down and away, in exactly the same manner that a yabby flees from a trout. That can prompt a canny predator into striking.

Another usage for downriggers is rapidly growing in popularity, particularly in Victoria. That is, mooring the boat up in a fast tidal run, connecting a burley bag to the downrigger weight, and setting a pilchard bait behind it. As the run picks up fish can be attracted from hundreds of metres away, depending on current flow. As they follow their nose to investigate, their first encounter is with your bait streaming from the downrigger clip. Clients tell me this is a devastating technique on snapper.

Make sure you tie the burley bag on to your weight with light line, or you could find your downrigger connected to an angry mako or a great white – ruining not only your gear, but your whole day.