GAS BALOONING FROM THE STONES

Gas ballooning is a unique method of fishing used by land based anglers to target a wide variety of pelagic fish such as Spanish mackerel, cobia, longtail tuna, yellowfin tuna and the Indo-Pacific sailfish. This technique was discovered on the West Australian coastline in the early 1980’s and works by utilising strong offshore winds to propel large skipbaits hundreds of metres out to sea using a latex balloon filled with gas.

When this radical form of fishing is utilised to its full potential it is an extremely effective and exciting way to catch huge gamefish. One of the major drawcards of gas ballooning is the spectacular surface strikes. Watching a huge pelagic speedster launch into the air to annihilate a skipbait always gets the adrenalin flowing. 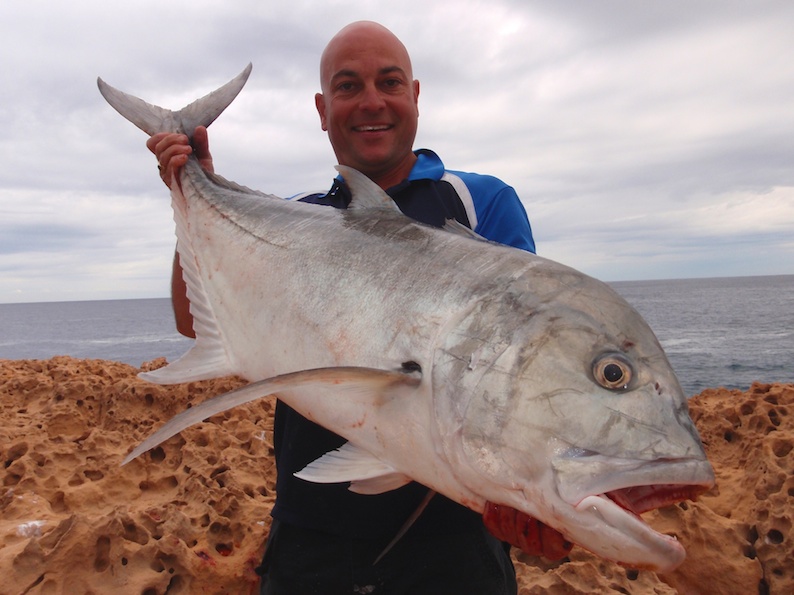 GEARING UP FOR GAS BALLOONING

To have a go at this innovative form of sportfishing the first thing you need to do is obtain the right gas and balloons. The gas required for gas ballooning needs to be lighter than air and helium is the most common choice. Helium is often referred to as “balloon gas” and is available from most party shops or major gas outlets such as BOC. At the moment there is a world shortage of helium and the price for this lighter than air resource has increased in the past few seasons. The cost of a small C/L sized tank of “balloon gas” is around $60 and fills approximately 3-4 balloons, while a larger D sized tank will cost around $150 and can fill up to 12 large balloons.

Hydrogen can also be used for gas ballooning and it is also considerably cheaper than helium, however this volatile gas is difficult to obtain due to its highly explosive nature.

For those anglers wishing to hire a tank of gas for only a short period of time, a party shop is probably the easiest option. If an extended trip is planned it’s far more economical to set up an account with a major gas supplier like BOC.

When you’re purchasing balloons it’s important to buy good quality latex balloons which are designed to be filled with helium. These balloons retail at around $6 each. The major advantage with these balloons is that they are reusable and can be refilled numerous times. The majority of anglers use 90cm round balloons made by Qualitex. 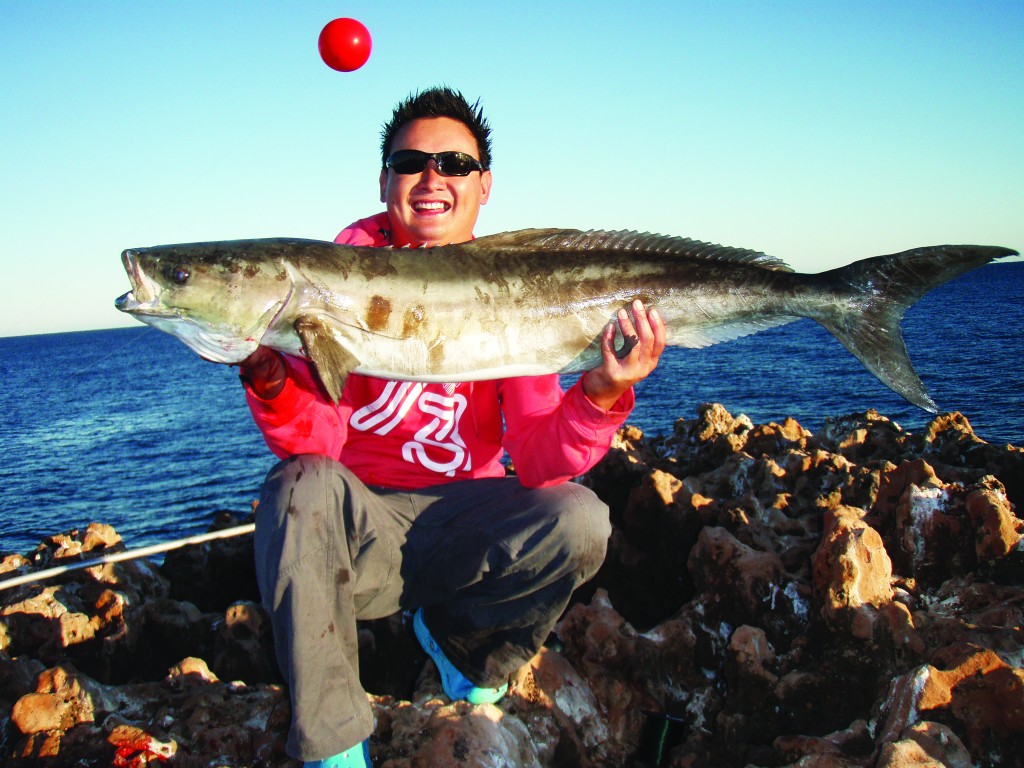 The most commonly used skip baits for gas ballooning include baitfish such as garfish, snook, mullet, slimy mackerel, sanmar (saurie) and tailor. The West Australian broadback garfish is the most popular gas ballooning bait due to their firm flesh. These tough baits are very resilient and they stay extremely well on the hooks even in strong winds. These skip baits create a tremendous splash when skipping across the water, making them irresistible to surface cruising gamefish. The best size garfish for gas ballooning is around 150-250grams, which is approximately 4-6 baits a kilo.

When the winds are blowing really strong (more than 25 knots) I prefer using bigger baits such as mullet and tailor as it much easier to keep these heavier baits skipping across the water. When the winds are light (less than 10 knots) smaller baits like small garfish and sanmar work a lot better as they still skip across the water even in a light breeze. It is a good idea to carry a selection of different bait sizes to suit the varying wind conditions.

When rigging up a skipbait I always use a wire trace. A one metre length of 175lb multi-strand wire will prevent you from being snipped off from an aerial attack from a toothy species such as a Spanish mackerel. When it comes to hook configuration I use 3 single hooks snelled together with a stinger treble 4/0 placed at the bottom of the rig. The top hook is placed on the head of the skipbait and the other hooks are evenly spaced down the bait and the stinger hook is usually positioned on the tail of the bait. Chemically sharpened hooks such as Gamakatsu Octopus hooks and Mustad Big Guns are perfect for making gas ballooning rigs. I usually use 8/0-10/0 hooks depending on the size of the bait.

A brightly coloured 6” squid skirt can also be placed in front of the rig. The squid skirt locks down the beak of the garfish tightly for excellent bait presentation and the bright skirt makes the bait more visible to predators. 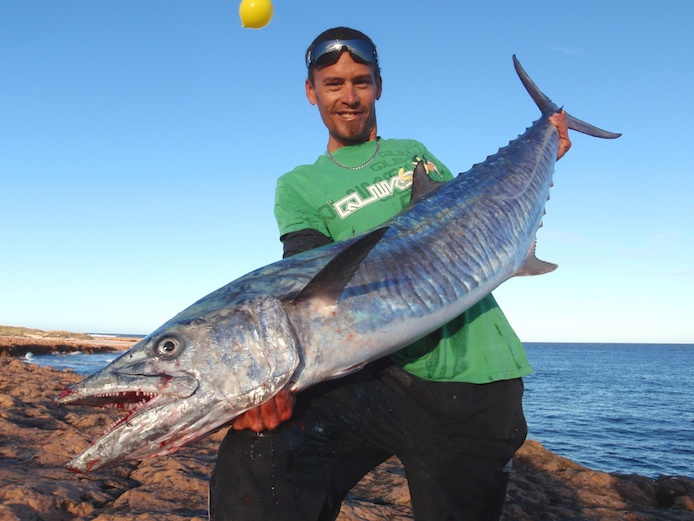 Heavy tackle game outfits are highly recommended for gas ballooning. Reels need to hold at least 600m of line as the most skipbaits are usually drifted 100-300m out to sea. When you are fishing in deep oceanic waters you can hook just about anything and even billfish such as black marlin and sailfish are frequently encountered using this technique.

My outfit consists of a Live Fibre Texalium Gold 15-24kg rod ZW570XJT and Tiburon 30 Auto-2speed reel. I usually spool my reel with 100m of 24kg monofilament line and 700m of 80lb braid backing to increase the line capacity of my outfit. The mono leader can easily be attached with a simple cats-paw knot. Most anglers use at least 50m-100m of mono top shot which acts as a shock absorber and provides superb abrasion resistance when fighting a fish near the rocks.

This heavy duty outfit also gives me the best possible chance of extracting big fish out of shark infested waters. Where there are good numbers of pelagics in popular gas ballooning locations the resident sharks are usually patrolling the same waters. Light tackle sportfishing is not advisable when gas ballooning due to the cost of all the gear and tackle required for this method of angling. When you factor in the cost of the balloon, gas and hooks each gas ballooning rig can quickly amount to over $30.

GETTING READY FOR LAUNCH

The key to getting the more strikes and getting the most out of this technique is all about finding the perfect weight ratio between your bait, balloon size and strength of the wind. Finding the ideal balance can be a little bit difficult at first and usually requires a few attempts to get it right.

The desired result should see a skip bait dart across the surface and make huge splashes as it lifts in and out of the water. I like my skip baits to spend about half the time on the surface of the water and about half the time in the air. Spaniards and many other surface feeders love the surface commotion created by a perfectly weighted skipbait and I’ve witnessed plenty of solid mackerel launch well over 10 feet into to the air to grab skipping baitfish.

If you find that your skipbait is spending too much time in the air or spending too much time sitting in water without splashing the surface, it is obviously not weighted correctly and requires some fine tuning. The easiest way to adjust your rig is to wind it back in and vary the amount of gas in your balloon. We use a rubber grommet or a small 8mm clear plastic sleeve to trap the gas in the balloon rather than tie it with a simple overhand knot which is almost impossible to re-open once it has been tied. This creates a hassle free way of modifying the amount of gas until you find the correct balance.

The offshore winds will often fluctuate in strength during a day’s fishing and the amount of gas in your balloon will need to be adjusted on numerous occasions. I have found that the ideal wind strength for gas ballooning is between 10-25knots.

Appropriate cliff gaffs have become synonymous with this style of fishing as the majority of popular gas ballooning platforms are reasonable high above the water. The West Australian cliff gaff is extremely popular amongst balloon fishermen and is effective when extracting fish from huge cliffs where it is impossible to reach your fish even with a long pole gaff.

The classic cliff gaff is usually made of stainless steel and incorporates three or four separate hooks attached to a rope. These gaffs are designed to slide down the anglers mainline or leader once the fish is at the base of the rocks. As soon as the gaff has reached the fish you simply lift the rope and the hooks will usually pin the fish over its head. I always make sure that at least two hooks are secured in the fish before I attempt to drag it up the cliff with the rope.

There is no doubt that the West Australian coastline is the home of gas ballooning. In the summer months the trade winds are strong southerlies and the best place to gas balloon during this time of year is Steep Point which is located in the Shark Bay region. During the winter months the wind direction shifts to an easterly and the Quobba coastline near the township of Carnarvon is an ideal location to catch pelagics using gas balloons. The Quobba coastline is an 80km stretch of coast which features some of the most iconic gas ballooning ledges such as Whistling Rock, South Wall, North Wall and Hells Gate. Another productive location for gas ballooning on the west coast is Wagoe Beach, this is an excellent place to target mackerel, tuna and even big amberjacks from the sand.

Unfortunately gas ballooning is far less productive on the east coast of Australia as the offshore winds on this side of the country do not coincide as well with the run of pelagics that annually migrate along the east coast in summer and autumn. In the past few seasons I’ve been experimenting with gas ballooning along the east coast at locations such as Iluka, Hat Head, Forster and Jervis Bay. During this time I have landed a few sharks and a solid cobia from the east coast rocks and I definitely see a lot more potential for gas ballooning in NSW and Queensland. With the right winds you can easily be fishing in deep cobalt waters where you could encounter species such as yellowfin tuna, wahoo and a wide variety of other highly sought after gamefish.

By investing some quality time and putting some serious effort into this technique you can really catch some incredible fish from the shore. If you haven’t tried gas ballooning before try to find some offshore winds and get on the gas.