Can you imagine catching a fish that is as ugly as it is beautiful, both easy to catch and hard fighting, and also one of the best tasting fish in the sea? I know this sounds like an impossibility, but ladies and gentleman, this fish actually exists!  The Mahi Mahi or “Dorado” or “Dolphin fish” (no relation to the dolphin of course) ticks all the right sports fishing boxes!  From its golden flanks, to its hard fighting and jumping antics, to its subtle delicious white flesh- it’s hard to pass up an opportunity to fish for Mahi Mahi.
With a few handy tip’s from this article, you too will fall in love with the Golden Dorado. 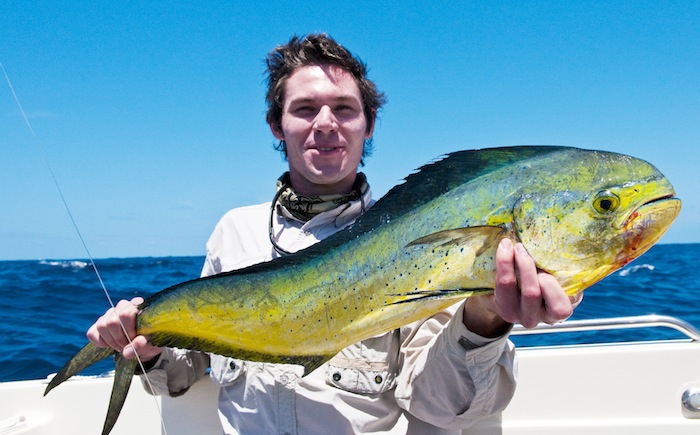 Mahi Mahi (Coryphaena hippurus) have an extremely high metabolic rate and voracious appetite that means they are willing to gorge themselves on just about any food they can find.  Mahi Mahi growth rates are fast as a result, with fish estimated to grow up to 50 cms a year.  Mahi Mahi reach sexual maturity in their first year, however only live for a maximum of four years.
What determines the obscure migratory patterns of Mahi Mahi is still uncertain, but you can bet that part of the driving force is the constant pursuit of food.  Mahi Mahi can be found around the majority of Australia’s coastline but are seen as a very rare catch off the Northern Territory and Victoria.  Whilst less prolific in the cooler waters off southern Australia, in NSW, you can expect to tangle with this enigmatic fish throughout the summer months as warm temperate currents push down our coastline.

Whilst the Mahi Mahi is a fast growing fish, the species’ short lifespan make conservation imperative. Size and bag limits are in place in all states as follows:
NSW: Ten fish over 60cms and only one over 110cm. QLD: Five fish over 50cms. WA :Two fish over 50cms NT: (rare catch) Thirty fish in possession VIC: (rare catch) no restrictions
SA:  N/A 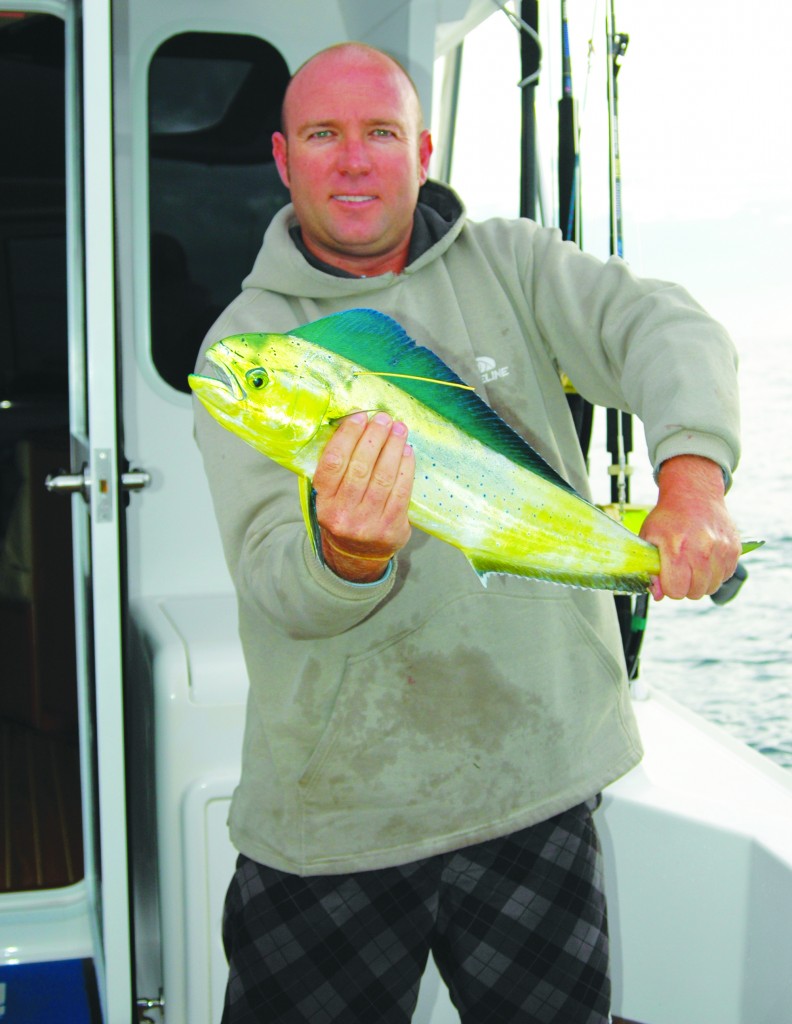 Little research has been done on Mahi Mahi, and there is much unknown about species. Therefore, it’s time us anglers stepped in and helped our Fisheries team out by tagging and releasing some of these fish for the benefit of research.  Once a fish is tagged and the tag card filled out (with information such as length, girth, date, method of capture and location caught) it is then sent off to Fisheries NSW.  If the fish is later recaptured, the tag is then removed and replaced with a new one.  The old tag is then also sent through to Fisheries NSW.   Tagging data is then analysed by scientists at Fisheries NSW therefore revealing information on migratory habits of the tagged fish, the distance and direction travelled between tagging and recapture and even growth rates.  This information not only allows us to better understand these fish (which is vital for sustainability and management into the future), but it can also help us fisho’s determine how best to target this magnificent sportfish.
If you would like to take part in gamefish tagging(in NSW) jump onto the NSW fisheries website: www.dpi.nsw.gov.au/fisheries/ 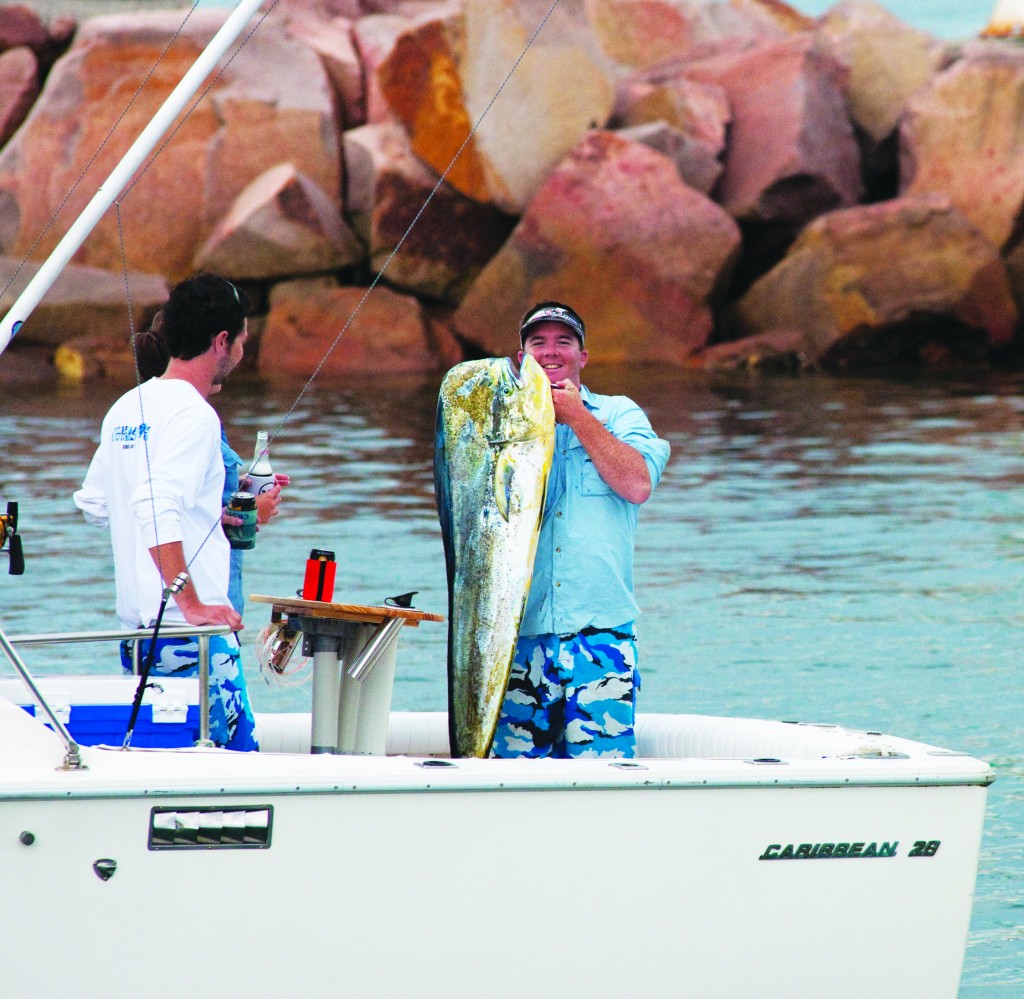 Targeting Mahi Mahi is just like any other pelagic gamefish. First you need to analyse your temperature charts and find the right for these fish.  As a rule of thumb off NSW, we mainly tend to find “Dolphin fish” in water temps over 22 degrees.  They will travel in colder waters but are often more lethargic and off the bite.  Finding the right temperature to fish for “Dolphin fish”, normally means a substantial travel offshore in search of those big currents pushing warm water down the coast.  If you do your research, you may just be lucky enough to find a good pocket in closer saving you a whole lot of travelling time and petrol.
Mahi Mahi are epipelagic.  This essentially means that they spend their entire life in the upper section of the water column, and are particularly partial to structure (often hiding around and under floating debris, weed or fish traps).  As you can imagine, there isn’t a huge volume of floating debris within offshore currents, so when this species do encounter structure… they will hang around it.  Often in large schools, and often until all possible sources of food (including smaller Mahi Mahi) have been exhausted.  Big clumps of Sargassum weed, floating debris (such as trees, shipping containers, and even an overboard Esky) will all hold Mahi Mahi in the right water conditions. This phenomenon has brought about the deployment of FAD’s (fish aggregating devices).  FADS are essentially mooring buoys, set in place for the sole purpose of attracting fish (such as Mahi Mahi) to one location for us fisho’s to enjoy.  The great people at NSW Fisheries, and the equivalent agents in each state, have been deploying these devices off our coast for sometime with great results.  Hop online to find your nearest deployed FAD. FAD’s are normally deployed around October every year, and removed from the water for maintenance around June.  They are usually deployed in 70+ metres of water. 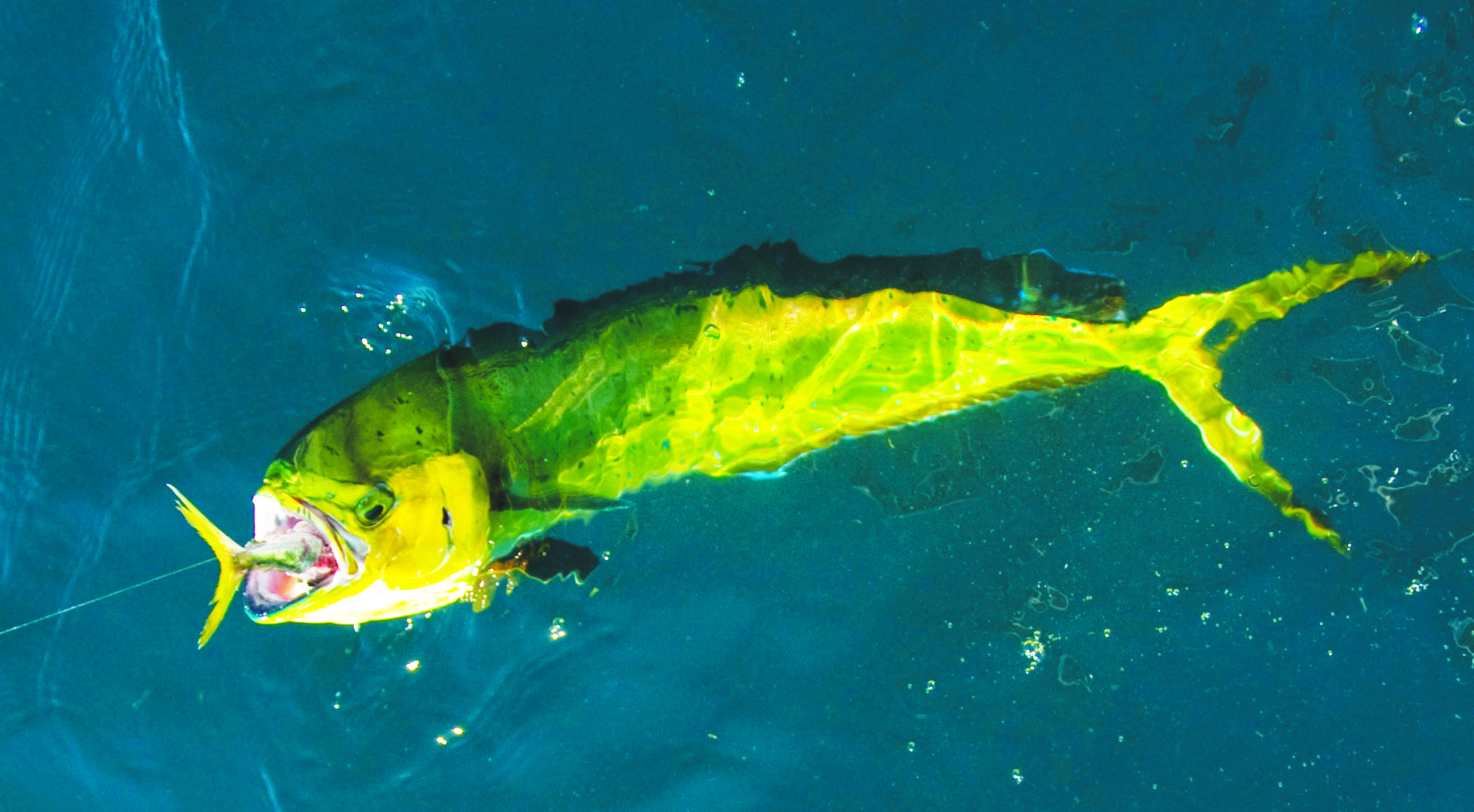 When fishing a FAD, it’s a good idea to have a bit of gear in your arsenal. Mahi Mahi can at times be quite picky in what they will eat.  In addition, they are pretty quick to wisen up to your tactics –what works for the first few fish doesn’t always work for the rest.  When these fish shutdown, a change of technique or a new offering in the form of a different lure or bait can be enough to put you back onto the bite. If you’re a lure fisherman, ensure you have a varied selection of lures and colours. A few trolling lures, a couple of surface poppers and some soft plastics are well worth having rigged and ready to throw around the FAD. When you are fishing the FAD –  there’s no need to sit on top of it!  Mahi Mahi are constantly on the move in the water surrounding the FAD… they will rarely be sitting underneath it.   If casting, set yourself adrift up current and  a good distance off the FAD.  Normally at this time of year the current is raging at a few knots –  so your drift will be quick.  If you have a sea anchor its worth deploying to slow your drift as best as possible. Your best strategy if to cast close to the fad, and change up your retrieve.  I recommend trying a surface popper –  watching a school of Mahi Mahi climbing all over your surface popper is pretty awesome! If you decide to troll the area, a couple of deep divers deployed and trolled slowly past the FAD often works well.  The trick is, again, to keep your distance from the FAD.  Running over the top of it will likely result in angry nearby boaties, and tangles with the submerged FAD rope.  If you plan on trolling, it is best done in the early morning.  Not only is the bite hotter, but you are also more likely to have the FAD to yourself.

If you like your bait fishing, a varied selection of baits are again vital for consistent results.  Fresh is best, live is better… and don’t be afraid to use big baits.  The Mahi Mahi’s voracious appetite will ensure that the school fight over the bait.  Ultimately, the bigger mouthed fish will end up with the bigger baits. Slow trolling or drifting live baits is a highly successful way of targeting bigger Mahi Mahi that hang around FAD’s or fish traps.  Downrigging deep livebaits is yet another tactic that has proved highly successful in weeding out the larger fish from the juveniles.  If dead baiting, start your drift up current a fair way way from the FAD.  A  slow cubing berley trail with a stripping back unweighted cube is a great way to catch Mahi Mahi. Agai,  no need to get right on top of the fad… a good burley trail will keep the whole pod of fish at the back of your boat.  The most important thing when it comes to cubing, is to keep that trail going even when you are hooked up.  Holding your hooked fish in the water is another little trick to holding your school near the boat while someone onboard puts a bait out.  Mahi Mahi are an inquisitive bunch – they will come up to see what the commotion is. 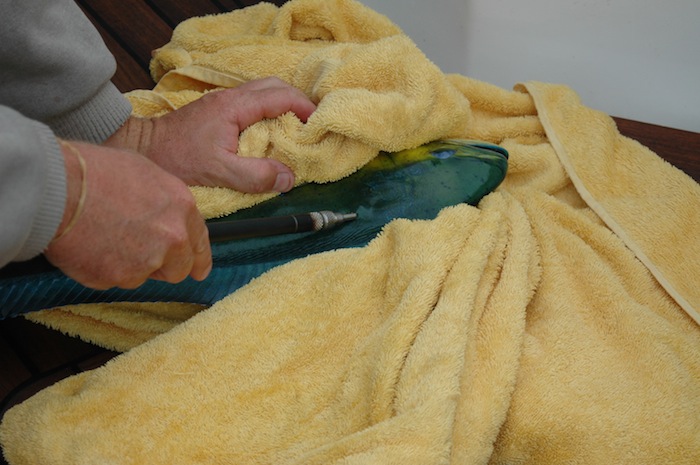 The bigger Mahi Mahi are normally encountered as bycatch when fishing on the edge of the continental shelf for Marlin. Targeting these larger fish means keeping a good lookout for signs of life in your surroundings. Have a spotter for bait and birds, and keep an eye out for any flotsam or weed clumps especially around current lines. When trolling lures, maintain your normal lure spread size as you would for marlin, they have no trouble smashing a 12 inch marlin lure. If fighting these fish on heavier gear (24kg and up), it pays to drop the drag back a little as they have quite soft mouths and hooks will pull out quite easy under heavy drag.  March is a good month for Dolphin Fish,  by now currents have pushed down to our more southern waters and has opened the door for everyone to have a shot at this wonderful fish. Get out there guys!