If your doctor prescribed fishing as a relaxing sport – stress-free and great for the karma – then believe me, they have never fished for Murray cod with surface lures. The lip-clad detonation as your lure is ripped from the roof is enough to put a skip in the heart of the calmest angler, especially when it’s a close-quarter encounter. Working surface lures for Murray cod is a very effective method and without doubt one of the most exhilarating ways to catch these iconic fish. From start to finish the visual aspects of surface fishing are second to none and about as good as cod fishing gets. 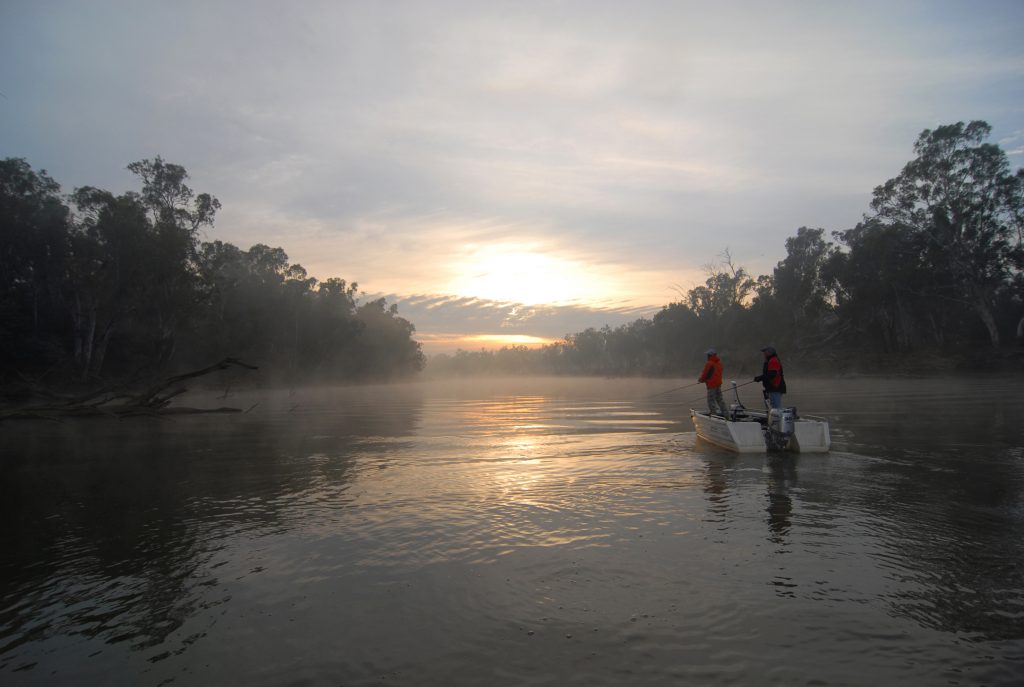 For many anglers the faith factor in surface lures has kept them at arm’s length, where short sessions with no reward have them doubting this very technique. Reluctant to break the mould of bait and underwater presentations, they are missing possibly the most effective way to target and catch large Murray cod. There is no doubt big cod have a weakness for the surface, hence the amount of big fish captures we have seen over the past few seasons. Dining mostly on fish and crustaceans, the opportunity to explode upon a top-water prize is often too good for a large cod to pass.  Ducks and other water fowl are first on the list, followed by water rats, lizards and almost anything of size that struggles on the surface. Now, just because they like a top-water prize doesn’t make these fish any less cunning, especially the larger specimens that have skulked amongst the snags for many decades. I have had many close encounters with big fish that have left me wanting the next level. 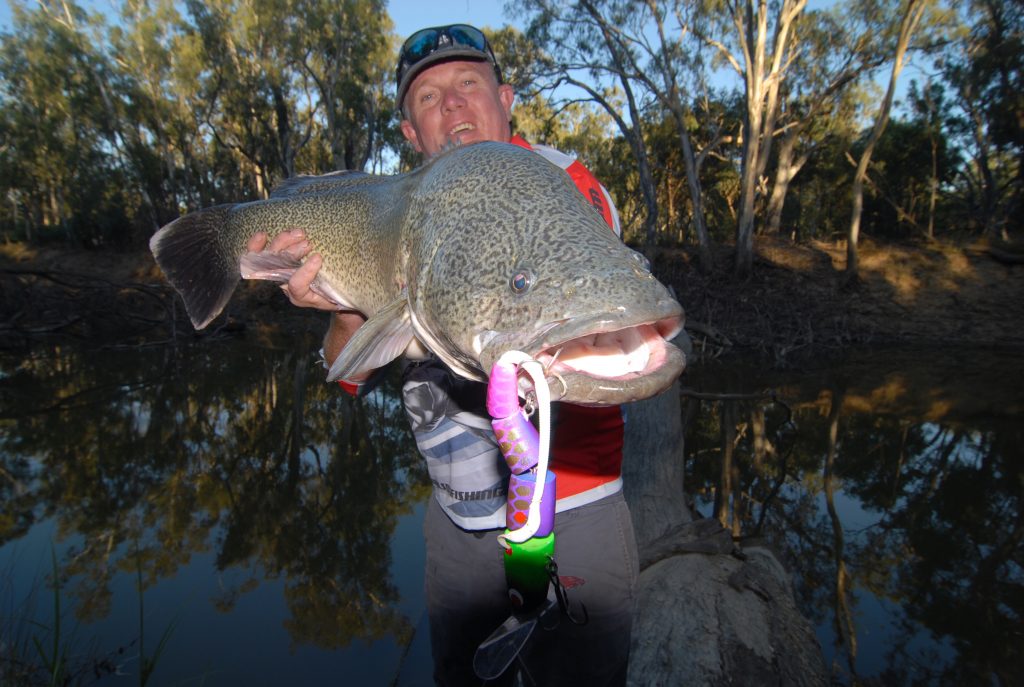 On the Darling River a few years back, fishing with fellow scribe Dean Norbiato, we marvelled at two wood ducks closely huddled around several fluffy chicks midstream crossing the river. We joked on how it was a brave swim and perhaps the full light of day was the catalyst for the bold crossing. In that instant the water exploded between the larger ducks and several of the fluff balls were sucked into the swirling abyss. Amongst the turmoil the parents took flight, leaving a solitary duckling swimming upstream and still mid-river. With surface lures now flying every which way we watched the fluff ball swim some 50m upstream and towards the safety of the bank. Almost there, it too was ripped under to a massive top-water detonation. Try as we might, we could not pull a surface strike – showing the cunning of these fish to be far superior to our angling nous at the time. These cod were no doubt schooled on surface lures and knew the real deal from the plastic paddling imitations. I have seen this many times where large fish are reluctant to react to surface lures. Even when they do, the smarter ones roll short of the take, leaving a vacuum of turbulence under the offering. Some of these boils half the size of the boat are the calling card of the educated giants. 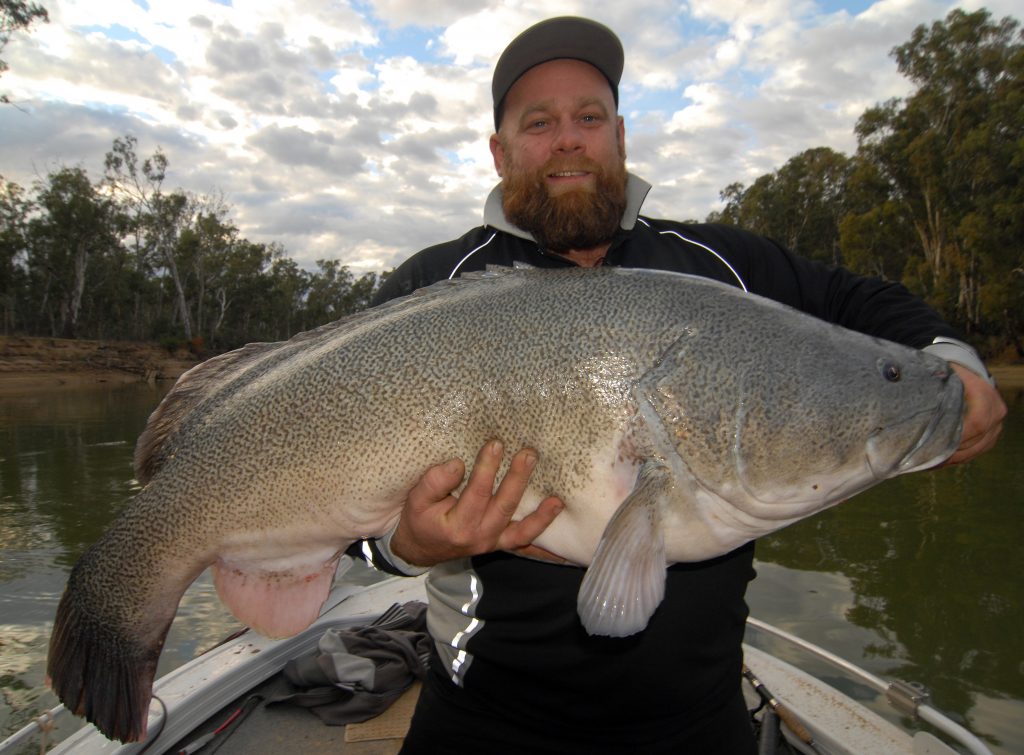 Big Murray cod are big cod regardless of how you target them, so the rules remain somewhat the same. Big cod react better to big opportunities, therefore we like to use the larger model surface lures. These we break down into two categories: the noise-makers and the stealthy approach. Larger paddling-style lures are the noise-makers that use their size and action to draw fish to the surface under less than perfect conditions. These are very effective in rivers with strong currents, where the sound and action work to create a larger presence less likely to be missed in the flow. Such lures will also work in deeper water to draw fish from depth or distance, or in lakes and rivers that are not perfectly calm.

In smaller creeks, rivers and lakes that are often glass-calm, a more subtle presentation is often best, especially for big fish that are educated in surface lures and the associated sounds. The Mudeye Snake or Koolabung Wake Snake are perfect examples as they present size and water movement with a less intrusive clicking sound. Both lures are responsible for many big fish captures across the board. Other lures for such situations would include smaller paddlers that are also a little less intrusive. 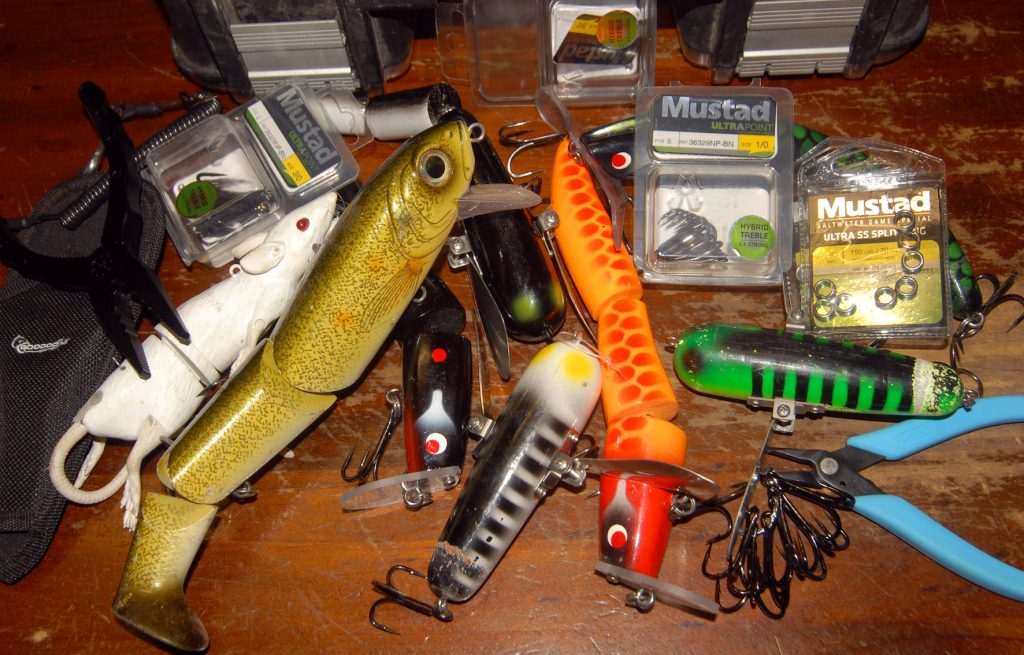 Ripped From The Roof

Surface lures are quite easy to use and rarely lost as they remain on the roof of the river, out of the underwater labyrinth of snags. In larger rivers, where current comes into play, you need to consider flow and speed adjustments during the retrieve. Some anglers I have seen tend to pitch short fancy roll casts tight to structure or the bank and retrieve only a few feet before winding fast and casting again. Looks fancy but in practical catch terms it’s not very effective. We tend to sit well wide of the bank and send these large lures at full distance with a two-handed cast. During the retrieve the lure is speeded up according to the current as it threatens to be swept behind numerous snags. I have had few if any big fish strikes close to the bank, with most coming several metres out to a third of the way back during the retrieve. Some skidder-producing strikes have even caught me unawares at close quarters in the flow.

Almost all big fish in turbulent water have struck the lure in the river’s full flow. This fact alone should break the mostly unproductive habit of trick casting tight to the bank as you are missing the bigger picture. In many cases large explosive takes in turbulent water fail to hook. If the fish have been hit hard at such locations they are reluctant to return for a second or third strike. If you have the gumption to do so, resist the urge to do a return cast after a missed strike from a big fish and instead leave the spot and allow the fish to reposition itself. After half an hour or so, return and quietly present your lure in the same location it was struck. If the fish is not of Einstein intelligence it will often strike the lure with full ferocity, providing another opportunity to set the hooks. 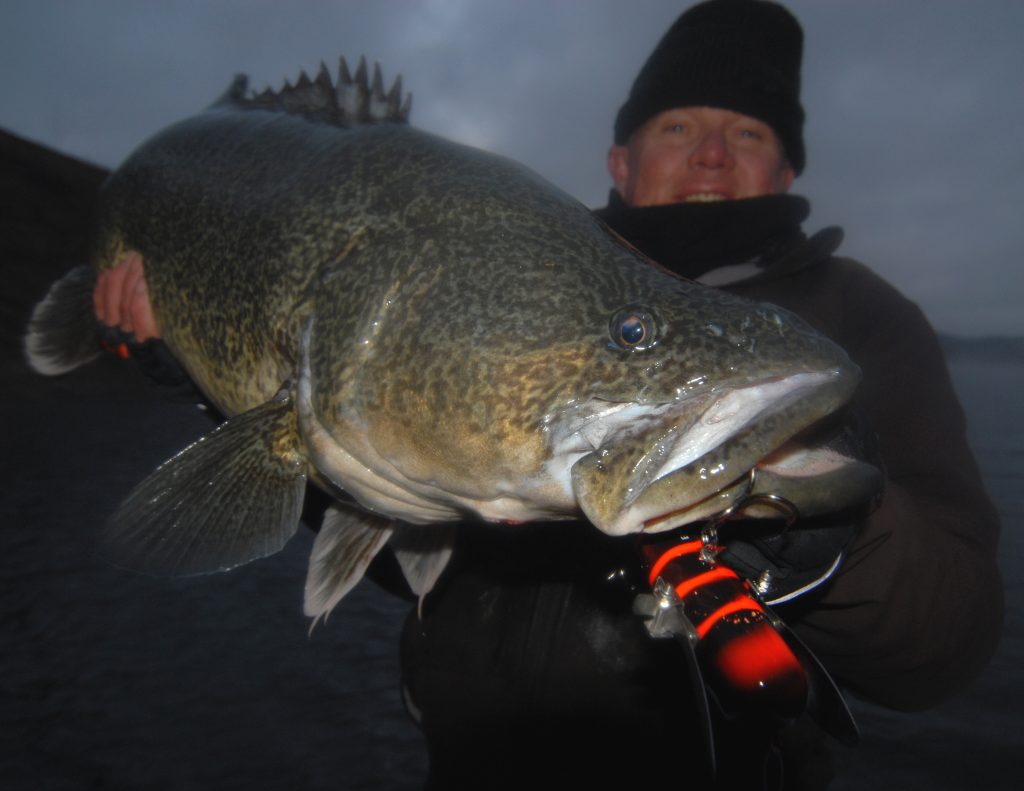 Improved hook-up rates are also greatly increased by what’s hanging from the undercarriage of the lure. A doubling of split rings allows your trebles to hang a little deeper in the water but care should be taken to make sure the trebles do not link. Many anglers opt for larger hooks, looking to grab more skin on these bigger fish. This in fact has the opposite effect, with poor penetration a real problem if the lure is not fully inhaled. We have found the use of quality trebles that are fine yet strong has exponentially improved the hook-up to strike ratio. Several times now we have landed giant Murray cod hooked in the side of the face or the top of the head by nothing more than a single hook on a treble. Such hook-ups would be unlikely using larger heavy-gauged trebles. 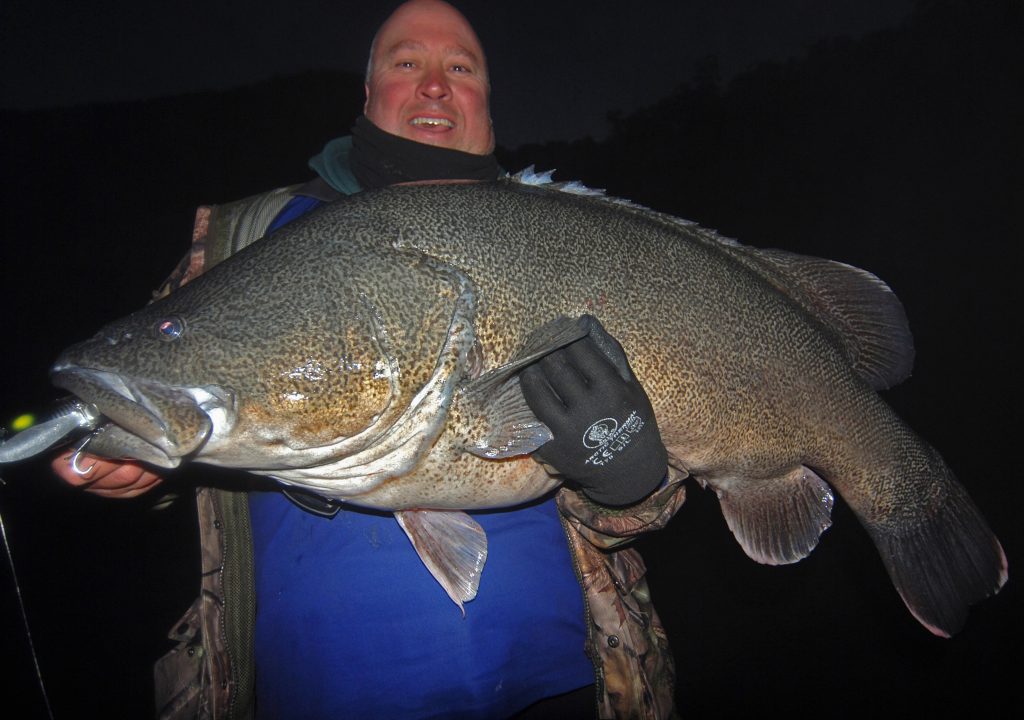 It’s An All Day Thing

It’s no secret that surface lures are most effective during periods of low light or darkness. Personally I have caught very few cod from the surface at night as I prefer the comfort of a good campfire to banging around in the dark casting at who knows what. Most of our surface-caught cod have come at dawn and dusk with many others landed in the daylight hours between. When conditions suit, big cod will smash a well-presented surface lure in the middle of the day – it’s simply a matter of having the confidence to fish them. Now think about this for a second or two. When chasing big Murray cod with diving lures or spinnerbaits we might go all day for one or two hits, or sometimes nothing at all.

So why should fishing the surface for this time period be any different? I put this logic to the test on the Murray River two seasons back, opting to fish nothing but the surface for the entire two-day trip. My fishing partner was happy to fish on the surface during the low light periods but swapped to diving lures once the sun was on the water. We smashed out a metre-plus cod at first light, missing another just after, so the fish were on. Over the course of the next two days, by sticking to surface I had eleven good strikes, landing three over a metre and two just under. Old mate fishing the divers landed eight cod, the biggest 70cm. If the cod are taking surface lures I for one do not have a problem fishing them all day. There are no set rules in fishing – only boundaries to be explored. 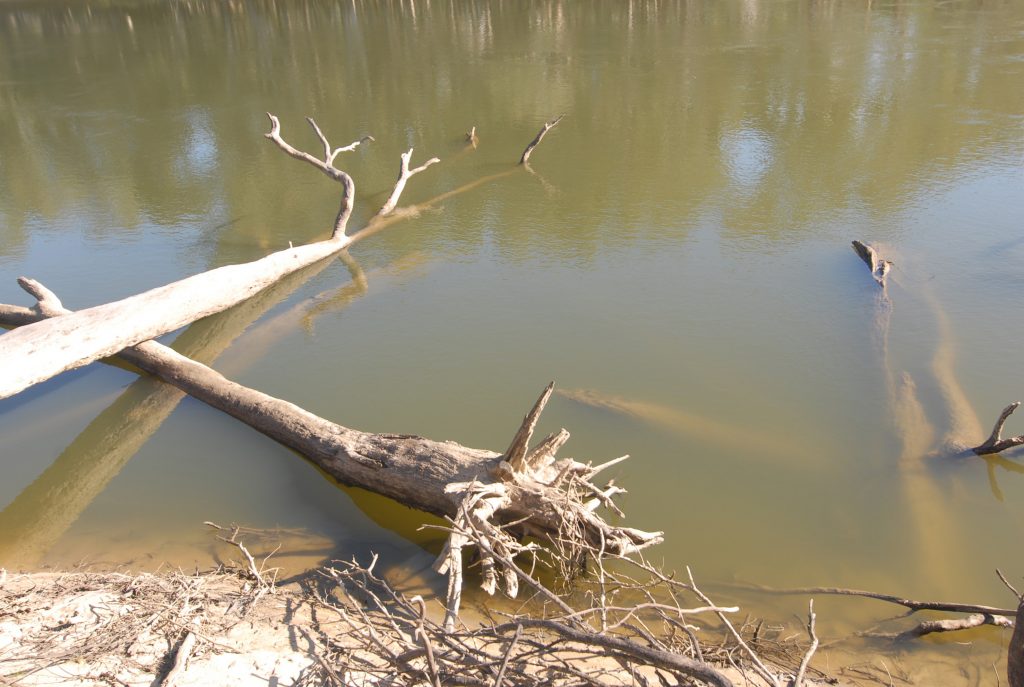 We have found that barometric pressure is one of the catalysts for a good surface bite. Stable pressure, be it high or low, is not that great; instead look for pressure that’s on the move. Straight after a low as the barometric pressure starts to rise is a prime time. An incoming storm that pushes the pressure down quite quickly is also conducive to a good surface bite. We have found the best results come on moving pressure. Under such conditions the run-up to the full moon is one of our favourite times to target large surface cod. Surface fishing for Murray cod is without doubt one of the best ways target these iconic fish – and explosive, to say the least. If you have never tried this exciting method you are missing one of the best techniques there is for catching giant Murray cod. Oh, and did I mention it’s also one of the best ways to get the absolute crap frightened out of you?!