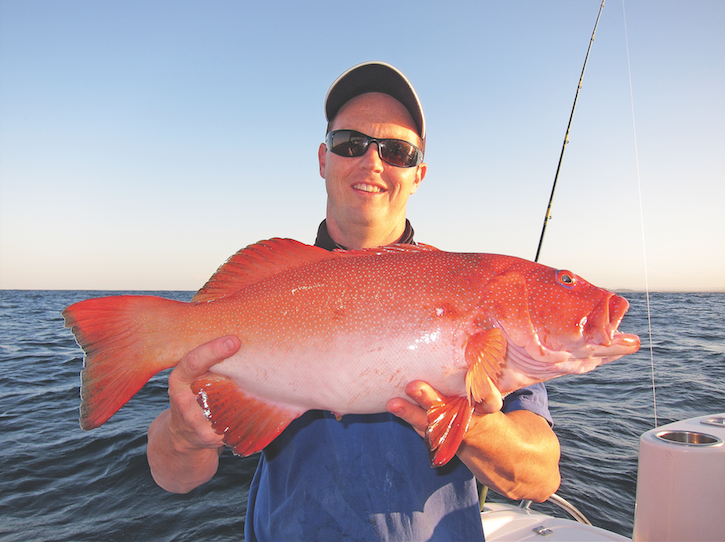 For many anglers the big hard fighting ‘pelagic’ species quite understandably become somewhat of an obsession. The power, stamina and brute strength these fish offer is what we all just love as sport fishermen.
Reef fishing however can be every bit as exciting and remains enormously popular across our country. One of the huge contributors towards this popularity is ‘the lucky dip’ factor, in that there are just so many available reef species you can encounter. While these reef fish are certainly not up there in the speed stakes like our beloved pelagics, they are capable of brute power and are a very serious contest for all anglers. As an added bonus our reef systems are home to some of the finest eating fish available.
With snapper seemingly stealing the limelight quite regularly, our other massively popular reef species include red emperor, coral trout, pearl perch and grassy sweetlip. 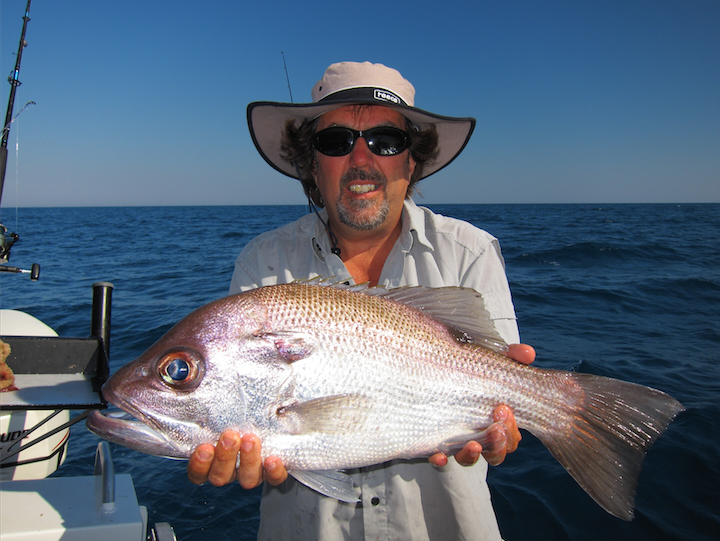 The mighty red emperor
Red emperor is without question one of Australia’s most beautiful and powerful reef fish. Their name sums them up incredibly well and they are a fish of some authority. They are a heavily muscled fish with a huge thick tail capable of generating real power and burst of speed. Their amazing red to orange colouration, which is patterned throughout the body, can only be admired.
Chasing BIG red emperor is something that really does demand time, patience and skill. To have any sought of regular success finding deep water near heavy reef structure is the key. They also will usually inhabit reef edges near current influence. These deep-water scenarios where you find yourself targeting big powerful fish demand the use of rather heavy quality gear. An excellent set up for this deep water bottom bashing is an overhead reel loaded with 80lb braid. A large monofilament leader of around ten metres in length will provide some necessary ‘give’ when the rod is fully loaded. This shock leader section should be around 80-100lb in breaking strain.
Under the influence of what can be quite strong current the most effectively fished rigs are paternoster set-ups. Paternoster rigs immediately give you the ability to quickly change your sinker, where quite often a hefty chunk of lead is a necessity. Bare in mind here also that red emperor is always found on the bottom. Another helpful tip with reds is to simply run one hook only on your paternoster set up. Hooking two BIG reds on the one drop is not a good thing as a hooked and lost fish will spook and shut down the whole school, like we see with many species. Another reason two on the one drop is a bad thing is that two BIG reds will comprehensively bust as much as 200lb leader.
Bait selection is not of vital importance as they are not one of the fussiest species around, however ‘big’ baits do seem to the best. Big flesh baits like mullet fillets and tailor work extremely well as do a whole dead yellowtail or slimie mackeral. Reds will also nail a soft plastic or small jigs when presented correctly however when targeting the trophy reds bait fishing certainly seems to dominate.
Red emperor are nothing short of spectacular on the dinner plate with flesh that even the fussiest of fish eaters simply could not refuse. 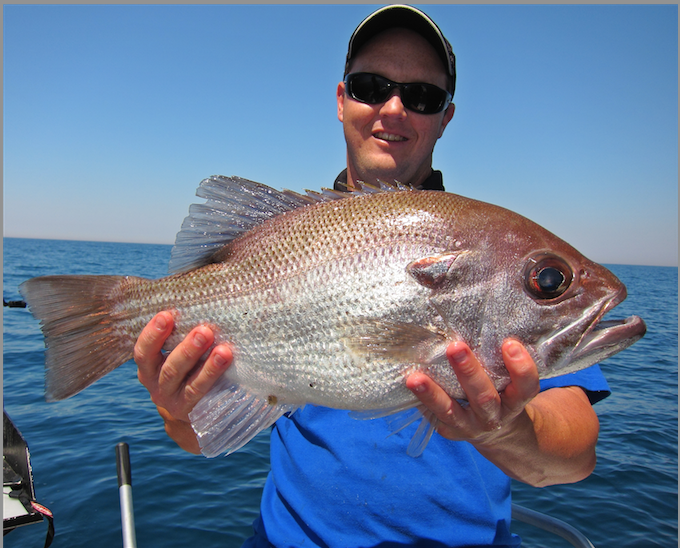 Coral trout
At the right size coral trout would arguably be one of the finest eating fish that swim. Coral trout are a tropical reef dwelling species where the biggest fish are generally found well offshore. Coral trout can grow to rather scary proportions but are a species that fall victim to the potential deadly ciguatera toxin.
Coral trout are yet another stunning looking fish. They exhibit striking body colours ranging from greenish brown and pinkish grey on the shallow reefs, to a bright rich orangey/red in the deeper waters. Coral trout are an aggressive ambush predator and can be caught on diving minnow style lures, soft plastics, surface poppers and both live and dead baits.
Throwing lures around sections of shallow coral reef can be very exciting and challenging way to target these fish. Extracting larger fish can be something of a problem and they are not a fish to show any mercy. Dependent on the size of fish you are encountering it may well be necessary to fish as much as PE 5-6 (50-60lb braid). I have done well at times using PE 3 (30lb braid) but the size of the fish made this quite manageable, with fish around 2-3kg on the bite. Out amongst the offshore reefs big trout can simply destroy you on really heavy PE 8-10 (80-100lb Braid). Some absolute brutes are there to slam surface poppers and eat anything that passes their reef hideaways. They can have you buried back into the reef or simply busted off in record time.
Bait fishing my local reefs throughout southeast Queensland sees the tactics change with these deep-water fish. Coral trout seem to have a real love for live baits such as yellowtail and slimie mackeral, but in saying this many fish still fall victim to the humble old pilchard also. The fish encountered in this deeper water will still use the dirty tactics of slamming bait and bolting for the cover of the reef. The general rule seems to be, if you manage to stop the initial run, the fish is yours in most cases.

Pearl perch
If I was fortunate enough to pick any fish I could for the table, pearl perch would be the one every time. These fish are often described as ‘the chicken of the sea’ and this reputation was not earnt by accident. The flesh of pearl perch is white with a very sweet, mild flavour and superb all round texture.
Pearl perch are generally found in small schools on our deeper offshore reefs where preferred water depths can be anywhere from 20-90 metres. The fish will congregate over hard reef, gravel patches, coffee rock and rubbly seabeds. I have also seen many fish caught over weed patches and this is a type of bottom the fish seem incredibly fond of.
Techniques for targeting pearl perch can be labelled simply a ‘numerous’, as many work. These fish have a healthy appetite and are not the fussiest of feeders. They fall to bait, soft plastics, metal jigs, octo style jigs, and blades. Basically anything they can fit down their big bucket mouths will be engulfed. In saying this however soft plastics are incredibly effective on pearlies and in particular any that ‘glow’ work especially well even through the night.
Pearl perch are not a species known for their fighting prowess but the bigger fish can certainly give you an honest fight. What they do lack in fighting power they certainly make up for on the dinner plate.

Grassy sweetlip
Sweetlip are a family of fish that can get quite confusing as many species fall into this group. One of the more common species here however is the ‘grassy sweetlip’ found throughout central and southern Queensland. As juveniles ‘grassies’ as they are more affectionately known, seem to prefer seagrass beds and mangrove swamps. Upon maturity the fish head to the reefs where they will inhabit coral reefs, ledges, coffee rock and weed beds. Preferred water depth can be anywhere from 5m to over 30 metres.
The larger fish are what you could call ‘bulldozers’ and given the quite shallow water you can encounter these fish in, they can bust you off in quick time if under gunned. They are a fish that respond well to both bait and artificials. Bait fishing can be as simple as locating some likely looking ground and sending down a fresh pilchard or squid strip. Although these fish can laugh at you on light tackle a sensible balance in your line class and leader is what you should aim for. For bait-fishing applications a sensible set up is say 30lb braid and 40lb fluorocarbon leader. This is by no means over kill on a big sweetlip. Bait fishing rigs can vary but a 2-hook snell set up with a running sinker is my preferred method of presentation. Baits that work well include large prawns, tuna and mullet fillets, squid and yakka (yellowtail) fillets. Another important point to remember is that grass sweetlip will spend nearly all their time on the bottom.
Targeting sweetlip on plastics is another exciting way to wrestle with these fish. What we have come to accept, as a ‘snapper soft plastic outfit’ is the ideal set up here also. A rod I the vicinity of 7ft in combination with a 3000 size reel and capable of fishing 20lb braid will have you in the game. These types of soft plastics out fits have become well recognised as pretty versatile set-ups on the reefs and are more than capable of knocking over large fish. Soft plastic selection for sweetlip is a matter of personal taste as these fish when eat most on the market when presented correctly. Personally I do find it very hard to go past the Berkley gulp range for my reef work, as it just seems to produce consistent results. Both the 5 and 7 inch jerks shads and the 5-inch crazy legs are presentations that have done me incredibly well. 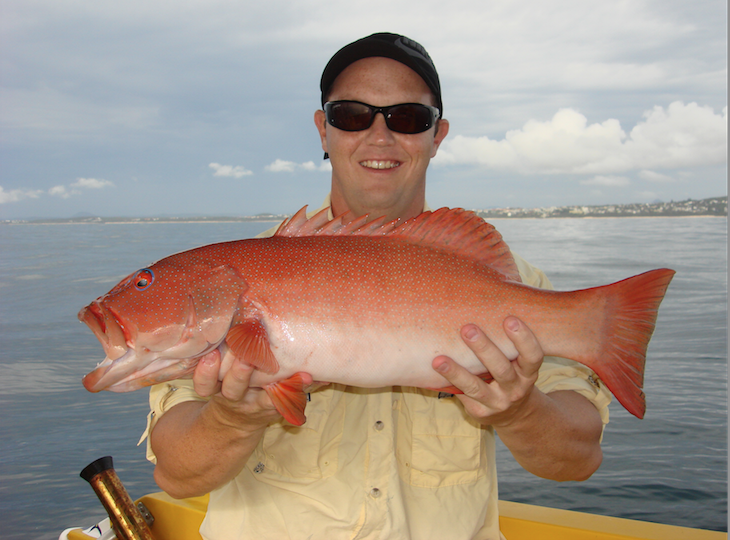 Like so many of today’s anglers I enjoy practicing catch and release fishing about ninety per cent of the time. However when I head to the reef the fillet knife will hopefully make an appearance as I love a feed of fresh fish. Although the many of the ‘green extremist groups’ that now face the fishing industry we should never lose sight of how important fresh fish is in a balanced diet. Sustainable fishing is what we are all about these days and we should never be made feel guilty for bringing home a sensible feed of fish.
Another important part of your procedure is to look after your catch and my preferred procedure is to leave the fish covered in ice overnight in an icebox. This allows your catch to stay cool and firm up overnight, which is very beneficial and makes both filleting and cooking a whole lot easier.
Red emperor, coral trout, pearl perch and sweetlip are simply all heaven on a plate that even our most fussiest of fish eaters will give the thumbs up to. 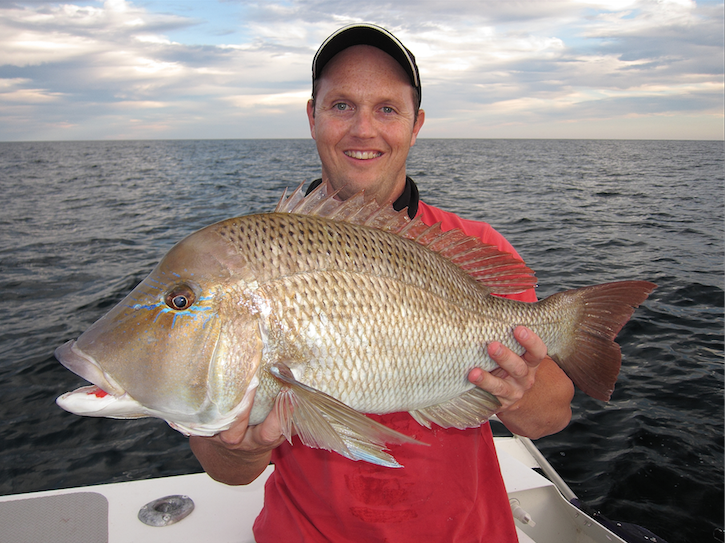