I  had the pleasure of taking out Taiki Natsume and Yudai Fujita from Yamashita in Japan on my local waters of Port Phillip Bay. For those who aren’t familiar with Yamashita, they are part of the Yamaria Corporation. Not only do they make some of the world’s best squid jigs but their hard-bodies, under the Maria brand, are responsible for countless captures of everything from barra and bream through to kings and tuna all over our great land.

The guys were here promoting the new 490 Glow jigs (reviewed in issue 49) and testing some new products yet to hit our shores. We had great success, with three of us using the jigs in six metres, where we had no trouble catching many small to medium squid in quick succession. We were catching so many I suggested we retrieve the boat and drive down to Sorrento to head out to The Rip to try for a few larger models. The guys had politely hinted they wanted to get into some deeper water and bigger squid and I was more than happy to oblige. 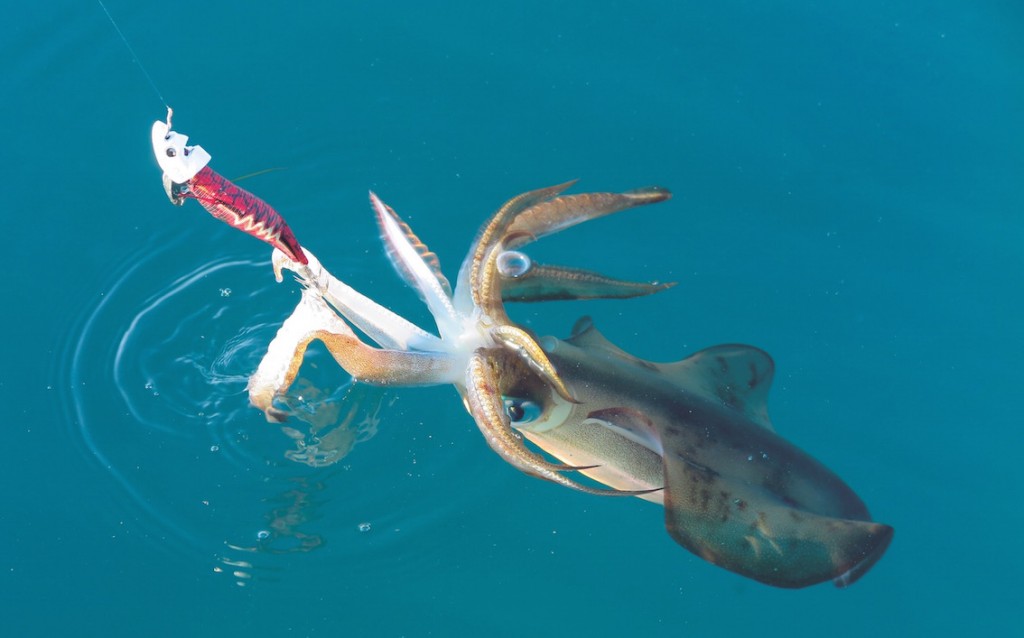 After we made our way out we started fishing in about 7-10 metres. We all tied on 490 Glow jigs in 3.5 and it wasn’t long before Taiki hooked up to a big squid; soon after Yudai followed suit. The guys were clearly happy with their large captures and Taiki asked if we could go out deeper, to 20 metres. I moved us out to where the sounder showed some nice healthy kelp beds and reef and I was curious as to how effective the jigs would be in water this deep and the erratic and hard-running current The Rip is renowned for. 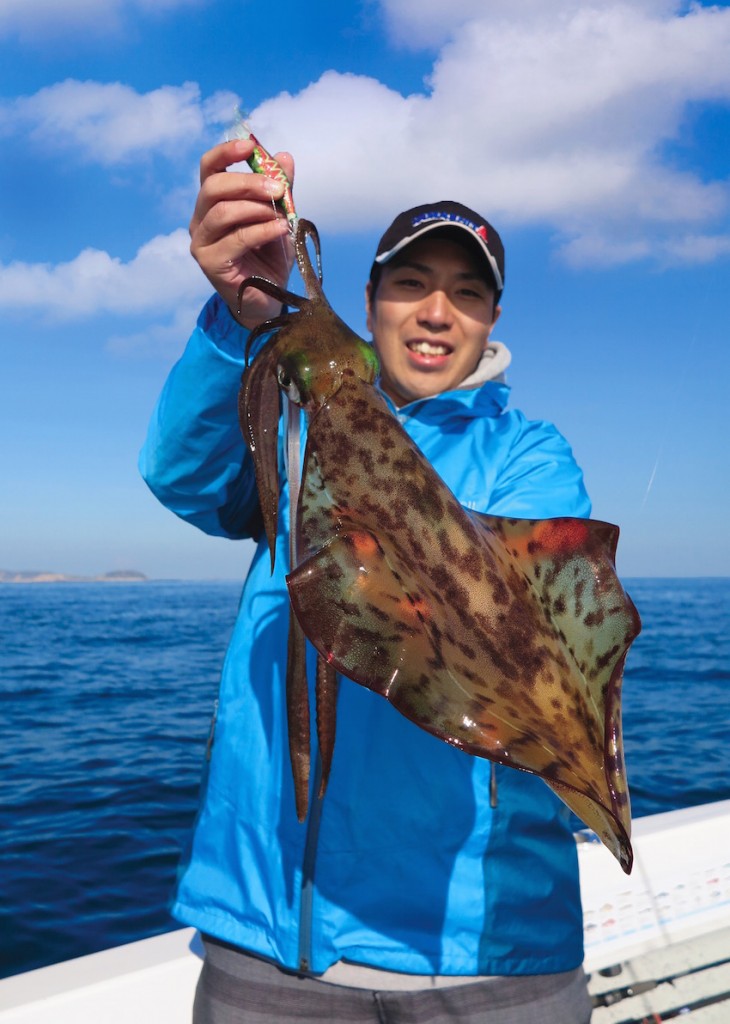 I’ve always enjoyed fishing deeper offshore waters for squid but my home waters don’t offer a lot of accessible locations to do it. Most of my offshore and deep-water squid fishing has been around southern New South Wales and, of course, here in The Rip. I knew it offered larger squid but Taiki kept reiterating the fact deep water held more and bigger squid. My idea of deep water is 12-16 metres. Taiki’s idea of deep water is 20-30 metres. I was intrigued that both Yudai and Taiki were so keen to leave squid to find squid and it had me thinking they must be onto something.

Tip run is a technique for targeting squid that I was always familiar with. Way back in issue 11 of Hooked Up we reviewed the Yamashita DD Spider and went on to review countless other tip run jigs. A tip run jig is heavier and has the tow point on top of the head of the jig rather than at the front. My understanding of tip run was basically right; I had the fundamentals but there were a few key things I had been doing wrong. First off, I’ll explain how tip run differs from your standard retrieve. When working a jig you impart a sharp, aggressive jigging technique and do this all the way to the boat. When tip running, the idea is to drop the jig, apply a few short lifts and then let the natural action of the drifting boat impart action on the lure. I’ve done this before and caught, squid, cuttlefish and octopus, but as I said, there were a few things I was doing wrong. 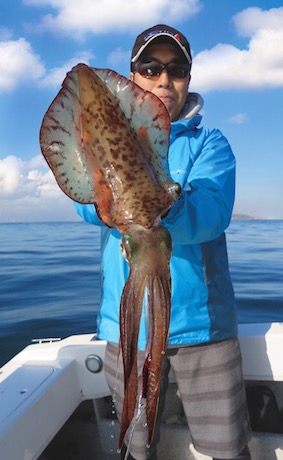 I figured the guys were going to pull out the DD Spider jig and use those but they pulled out something I’d never seen before – the TR Sinker, TR standing for tip run. The TR sinker is essentially a 30-gram lead helmet that fits over your standard Yamashita squid jig, which is great as you can still use your favourite coloured jigs to employ the technique. We all opted to use the 490 Glow jigs in the deep version, which means our jigs weighed 52.5 grams. Each sinker comes with a small rubber band that secures the helmet and provides greater stability, but don’t worry if you lose the rubber band – it’s beneficial but not essential. (I know this as when they handed me my TR Sinker I threw the rubber band in a side pocket thinking it was rubbish and couldn’t find it again.)

They recommend always using an Egi clip, which fits easily through the gap at the top of the sinker and acts as a tow point above the head as opposed to the front. It’s essential that the tow point be above the head as this keeps the jig horizontal or slightly nose-down, which squid find most appealing. It’s therefore imperative you don’t let a tip run jig to sink free-fall – it must sink with constant tension on the line to maintain stability and a horizontal angle. If it nose-dives the squid will lose interest, so no slack line after the initial drop to the bottom. Once the jig hit the bottom the guys would impart a short, sharp and rapid action into the jig, more akin to high-speed jigging for kingfish. After the short, sharp jerks they would let the jig sink with tension and wait. And they would wait quite a while, almost like bait fishing. 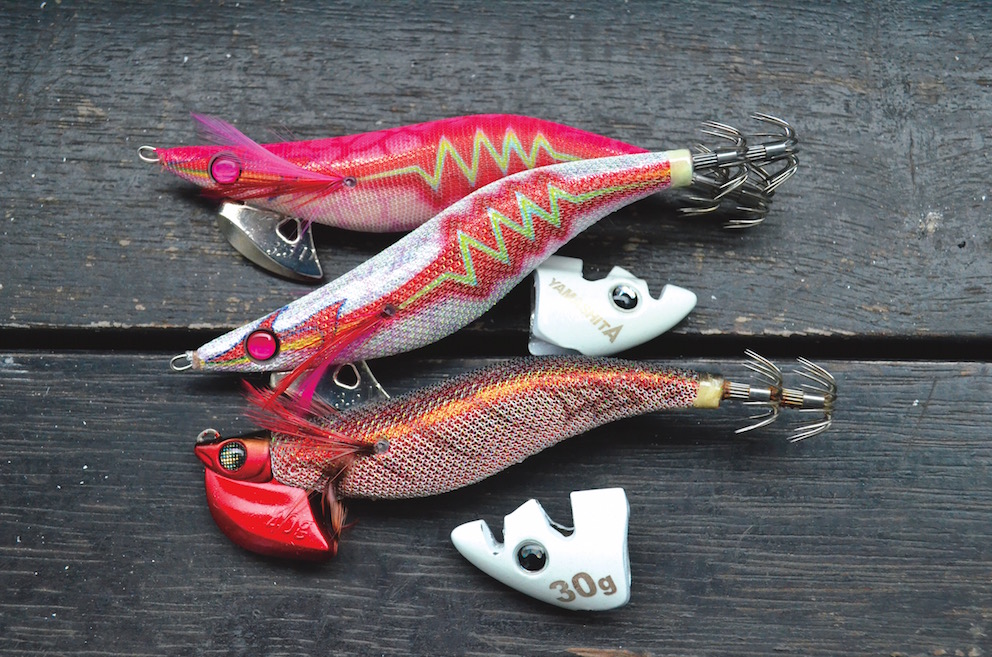 Once the jig is down the bottom everything is different from your standard squid fishing. For starters – and remarkably – I got hit three times and didn’t hook up. At first I thought it was the bottom, but Taiki explained that with this technique the squid will whack the resting jig with their candles and won’t aggressively grab it and bite it with their mouths like they do with standard squid fishing. He explained that I should watch the tip and feel for the squid strike, and I should strike to set the barbs. Even if you miss, just keep the jig down and the squid will come back and have another crack. This is where the “tip run” name comes from: it’s essential you watch the tip and look for the strikes as you would if, say, bait fishing for snapper.

It wasn’t long before we were drifting in 20 metres of water and Taiki hooked up. My Egi rod he was using buckled over like I’d never seen it do before and line was pulsing off the reel. It wasn’t just a big squid, but a big squid hooked in 20 metres of water. There’s a lot of pressure and weight when something shaped like a parachute is hooked on the bottom in 20 metres. Yudai and I both stood and watched while Taiki brought his squid up, which was followed by one even bigger. I then caught one, as did Yudai.

The guys then wanted to test out their new Yamashita Tai Kabura jigs, which are designed for catching demersal species such as snapper and emperor. Unfortunately Victoria’s snapper season is long over but the boys caught many wrasse and perch. While they were using the Kabura jigs in about 35 metres of water I dropped down the TR weighted jig and it wasn’t long before I had hooked another squid. I was somewhat shocked to hook-up in such deep water and I’ll be using this technique and the TR sinker a lot more.

While your standard Egi rod isn’t ideal for this technique, as they’re quite stiff in the tip, you can still use them. Taiki recommended using a rod with a softer tip to detect the hits better. There are many tip run-specific rods made by all the major Japanese rod companies but none of them are available in Australia as yet and probably won’t be as the market at this stage is just too small. There is a Black Hole Kraken Tip Run rod that you can order via your local tackle store if you do want a rod specific to the technique. 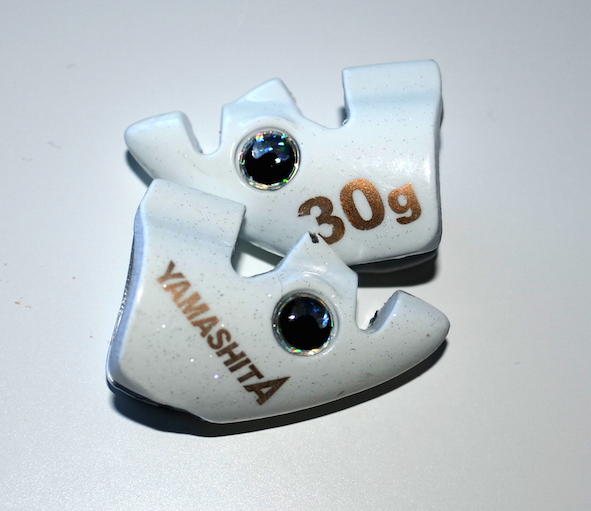 There is no doubt many anglers have been targeting squid in deep water and fast currents using other methods such as drop-shotting a sinker. While this works it doesn’t present the jig as well as the TR sinker or a specific tip run jig, and a heavy sinker drop-shotted off your leader takes a lot of the fun and sensitivity out of it. While this technique is highly effective and useful in my home waters around Melbourne, I see it being of great use to anglers in NSW, South Australia and Western Australia, where they have great accessible squid grounds in offshore waters. This is a great fun way to target some big squid and you need only buy the new TR sinkers and use your standard jigs to get into it. Go give it a try through winter while there are some big squid around.