How To Catch Yellowbelly

The gluttonous golden perch, affectionately known as yellowbelly, is the staple freshwater species of our inland dams and rivers. This heavy-set appearance often earns the species a number of unflattering names such as pigs, porkies, fatties, horses, dinner plates and, of course, footballs. These prized ‘footballs with fins’ quench the thirst of inland anglers looking to lure a scale-slamming native, as the Murray cod season snaps shut over spring, allowing these monstrous fish to breed in peace. Down go the stumpy swords, bulletproof braid and XOS swimbaits. In their place come thin wands of graphite, a slither of braid and a stash of shiny gold nuggets. Each year hordes of new freshwater footy fans flock to our inland dams searching for a perch or two to quench their native appetite. Eastern lakes that are seeing increased freshwater traffic each spring include Eildon, Burrendong, Copeton, Blowering, Keepit, Burrinjuck, Wivenhoe, Googong and Australia’s number one yellowbelly mecca, Windamere. Being lucky enough to share time on the water, at most of these dams with a host of expert anglers, has helped me cut through the noise and provide a greenhorn’s guide to catching a yella or two this spring. 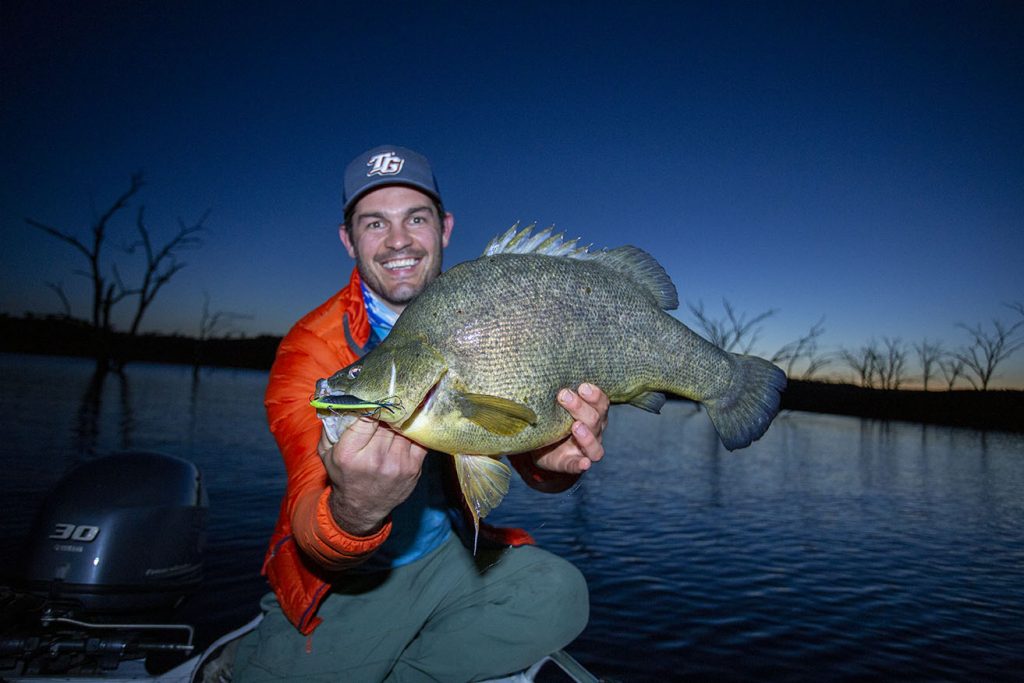 A Solid Line Up

Just like a footy team has a starting line-up, comprising the best players in the team, I have favourite yellowbelly baits that I always suit up first. These include lipless crankbaits, soft plastics, blades/soft vibes, spinnerbaits/chatterbaits and diving minnows. When considering bait colours, look to have an even spread of light and dark tones, shades and flickers in your tackle box. Colour schemes will then expand, exponentially in some cases, as you gain more confidence in each bait type.

When you are out on the water stalking a perch or two, it’s always worth having some rattling and silent baits in your arsenal. In fact, when fishing with a mate, I always make sure one of us is using a rattler and the other a silent version.  As soon as one angler starts to rack up the results – call it three fish in a row – we swiftly change over to the triumphant bait. It is amazing how this can change from session to session, so it’s always good to start each session with a different spread of baits.

Assist hooks have become all the rage for yellowbelly fishermen over the past few years. The Ecogear ZX range of blades were a real trailblazer in this space, helping pioneer an alternative hook system for finesse baits. There are a multitude of benefits and reasons why anglers, en masse, are swapping trebles for assist hooks. Firstly, they seem to cut through the weed better than your standard trebles and foul up a lot less.  Secondly, they offer a superior hook-up rate. Once they lock into the lips of a greedy golden perch they rarely come free. The only downside is the same can’t be said for a snag; once they lock onto an underwater log it can quickly become an expensive exercise.

I also have a tackle box full of other lure types that I call on from time to time. These benchwarmers include skirted jigs, small swimbaits, spoons and ice jigs. But it is these favourite five, a proven clique, which all kick their own respective goals each freshwater football season. 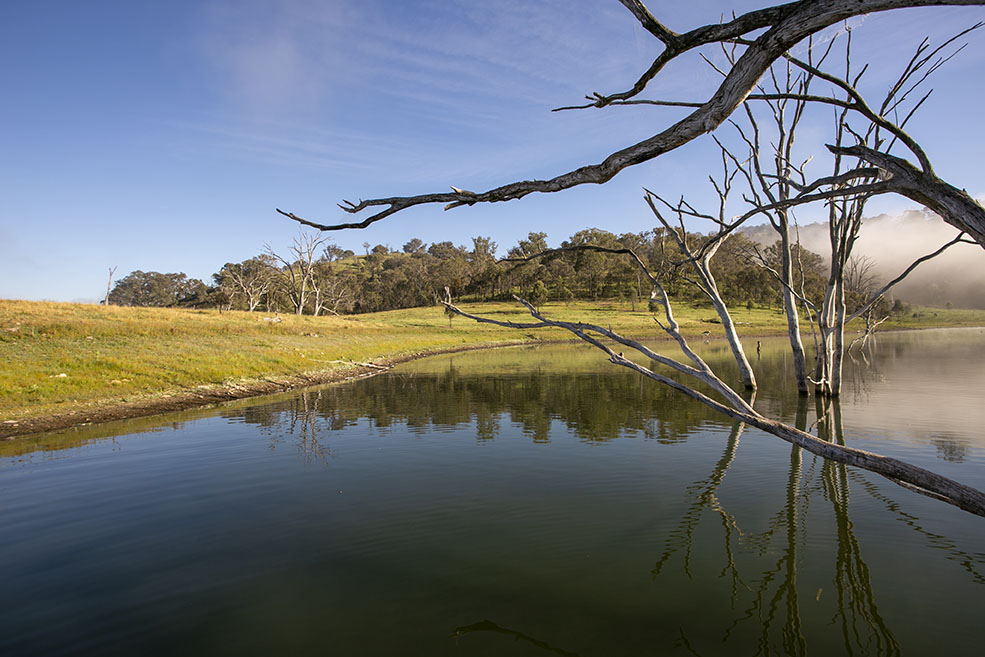 Tools of the Trade

Now, armed with a fistful of shiny new baits, you will have to turn your attention to the tools of the trade that will hurl and hook a hungry perch. While you could switch to a new set-up for each different bait, it’s simply not needed. I opt to run a max of two yellowbelly spin sticks each season. It’s a lot more cost-effective to buy a good quality snap, such as the Mustad Fastach Clip, to quickly rotate between baits.

Any 1-4kg graphite stick standing between 6ft 6in and 7ft 2in with a medium to fast taper is more than adequate to handle the subtle twitches of a soft plastic and the deep-water probing of a lipless crankbait. I’m currently running the new 7ft Jackall Revoltage Light Plus and it’s a great blend of strength and sensitivity. I also pair my light spin stick with a quality 1000 to 2500-sized spinning reel. At the moment I’m jumping between the Daiwa TD Black 2000 and the new Shimano Stradic FL 2500. 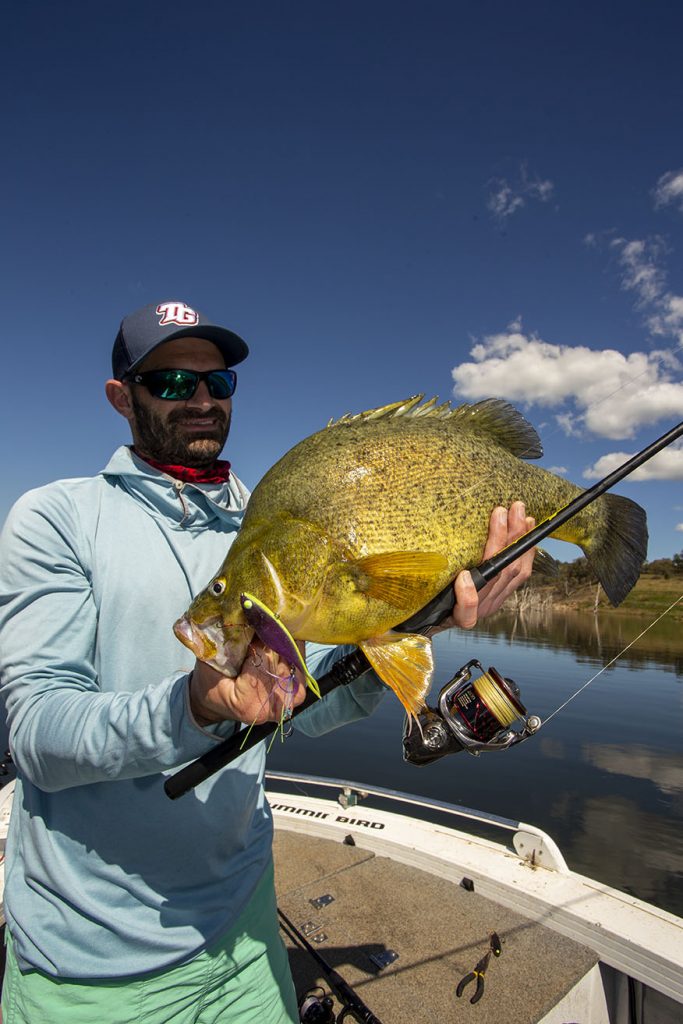 I spool each to the brim with 10lb braid, attached to an 8lb fluorocarbon leader. While an 8lb leader is a sweet balance between finesse fishing and keeping your $30+ Japanese bait connected, there are certain extenuating circumstances that may lead to a 6lb or even 4lb downsize. These include being greeted with particularly clear water, a finicky bite or using much smaller presentations such as a 3g finesse blade. The Daiwa J-Braid Grand and Sunline FC Rock fluorocarbon leader are both high-quality options that will see you spending more time smiling for the camera than grimacing over a busted knot.  Now, to get you smiling you need to make sure you are investing your time in the most profitable perch areas. 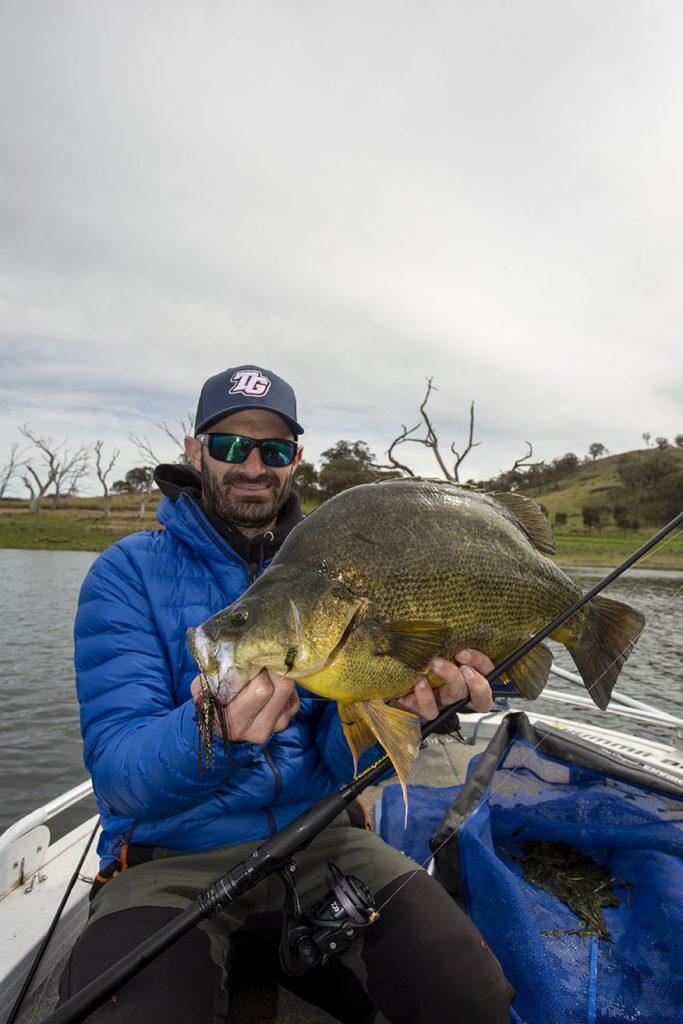 Arguably the most lucrative of all areas to target trophy yellowbelly in spring are weedy bays. Large schools of undernourished fish swarm to these nutrient-rich weed castles foraging for a quick and easy feed.  Popular prey in these areas includes small baitfish, shrimps, yabbies, worms and other creatures and crustaceans that live in the dam’s dense weed. When targeting these shallow areas, in the 1m-3m depth bracket, we like to strap on the polarised sunnies and suspending jerkbaits. Commonly built like a stick minnow with a long thin bib, these neutrally buoyant baits comfortably reach 3m on the crank.

Unlike lipless crankbaits, these baits need to be cast tight up against the bank and twitched and paused back to the boat. It is paramount to vary your twitches and pauses to impart a fleeing baitfish action on your bait. Suspending minnows are great for targeting perch pigging out in the shallows because their neutrally buoyant nature will see them, when paused, hang in the fish’s face, goading them to strike. 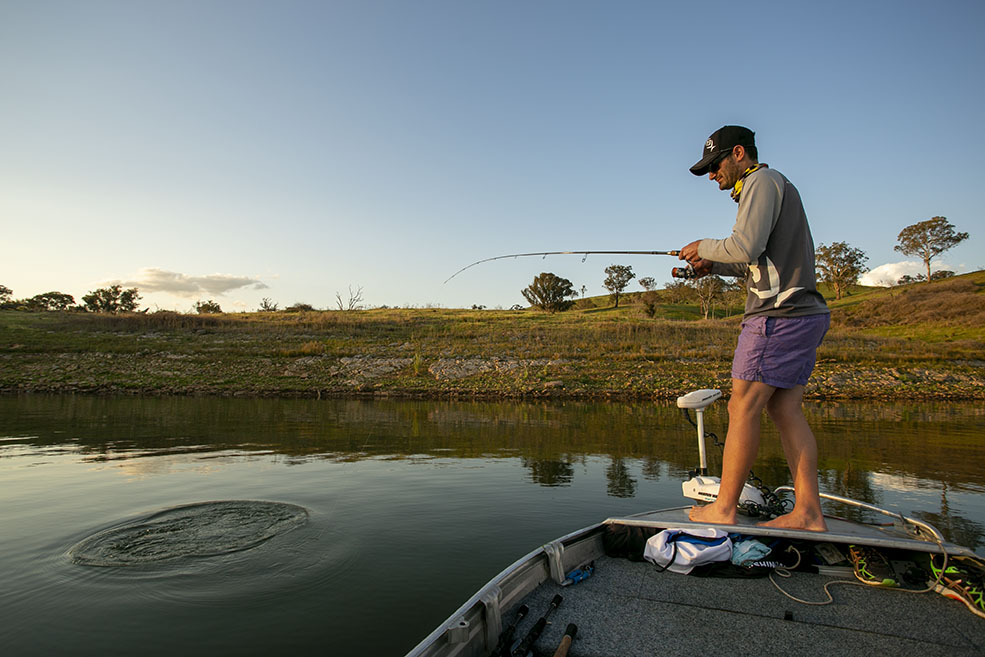 A close second is standing timber, which seems to attract yellas like a magnet. In winter, schools of yellas cling tight to standing timber. Vertically rolling grubs such as up the trunk is a fantastic way to target deep-schooled winter yellowbelly. In spring, however, yellowbelly still frequent trees, but they tend to be holding on timber in shallower water. A multitude of baits and techniques will snare yellowbelly that are sticking to sticks in shallow water, but two of my favourites are lipless crankbaits and small chatterbaits.  While the baits are very different, the basic retrieve techniques are the same. Simply cast your bait well past the standing timber, allow it to achieve depth, before commencing a slow, rhythmic roll back to the rod tip.  Once your bait wobbles past the base of the timber, give it a good rip. As the majority of perch dwell at the base of the timber, a quick squirt of speed plays on their primitive instincts and can trigger a reaction bite.

The final hotspot you can’t ignore when trying to pull a perch in spring are rocky points. These come in all different shapes, sizes and depths, but the one common factor is perch just love them.  I always like to first comb the rocky points with suspending minnows in that shallow 1m to 3m range. Careful not to spook them, we start 30m off the point and rifle a series of cross-cross casts over the shallowest area of the point, stuttering and pausing the retrieve.  After exhausting this option, working down the gradient of the point, massaging each shoulder to 3m, we switch over to the lipless lollies. Using both hard and soft vibes, blades and small spinnerbaits, we then proceed to interrogate the deeper sections of the point.

Again with a criss-cross approach, we work the main apex of the point before turning our attention to each edge of the point. Before leaving we also blast a handful of long, probing casts into the extra-deep water, say 10m+, at the front of the point with heavier baits. 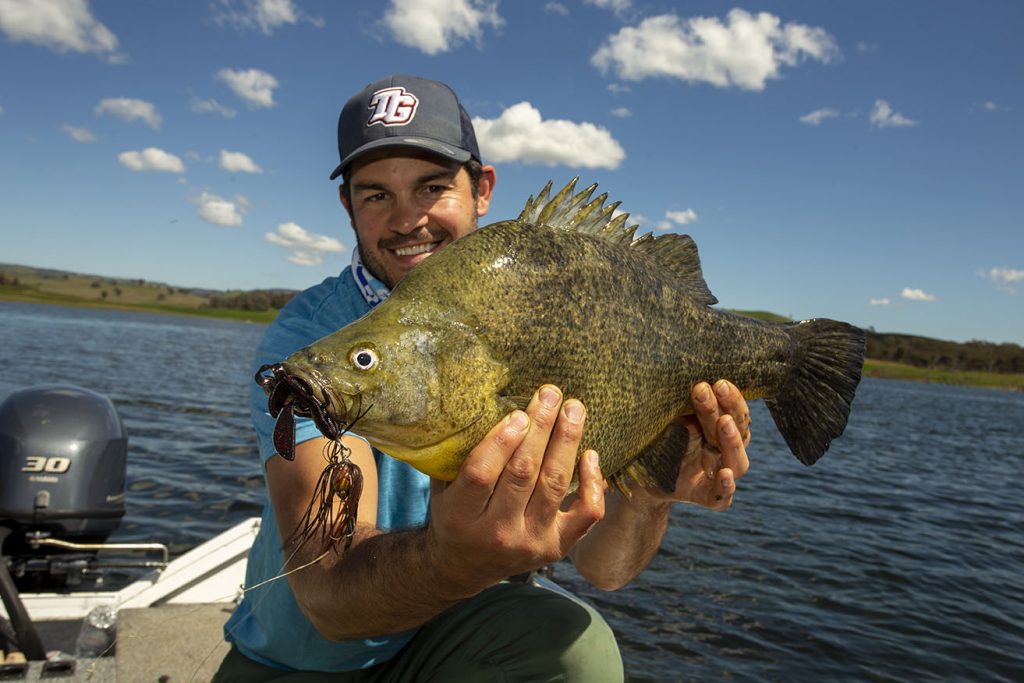 While I’ve highlighted the top techniques for fishing the three dominant yellowbelly haunts of weed, sticks and stones, it’s important to have a few different tricks up your sleeve. While there are myriad variations, these are the staple stable to put a bend in any native angler’s graphite this spring.

Slow Roll – The simplest of all retrieves, yet one of the most potent, the slow roll is exactly as the name suggests and requires the angler to cast their bait before slow rolling it back to the rod tip. As a variation, rather than letting the lure hit the bottom, start your retrieve as soon as the bait hits the water.

Hop and Drop – As the name suggests, this retrieve sees the angler ‘hop’ the bait off the bottom, before catching the slack line as it ‘drops’ back to the dam floor. Most takes will happen on the drop, so keeping tension on the down phase of the retrieve is imperative.

Burn and Kill – After thundering off a long, probing cast, let the bait reach depth before rolling ten quick cranks of the handle.  This will see the bait ‘burn’ and rise through the water column. After the burn phase is complete, the angler simply stops winding, or ‘kills’ the retrieve, while monitoring the slack line and following the bait back to the lake floor.

Shake and Bake – I was first introduced to this method by perch protagonist Rory Benn-Clibborn. The technique involves the angler shaking slack line once the sinking lure reaches the dam floor. By shaking only the line, the bait bobs and puffs on the bottom, mimicking a scampering crustacean. After roughly 10 seconds of shaking, reel in a small amount of line and repeat the ‘shake and bake’.

Pig Tales – Granted, yellowbelly might not carry the same cache as the mighty Murray cod, but what they lack in size they make up in spirit and abundance. After the inevitable grind of goodoo fishing there is nothing better than heading to an inland goldmine and digging up a few golden nuggets.

If you pack the right rod, reel and lines, have a decent spread of baits in your box and target weed, trees or boulders with the right retrieves you give yourself every chance of taming a freshwater fatty or two.