trolling and cubing for yellowfin tuna 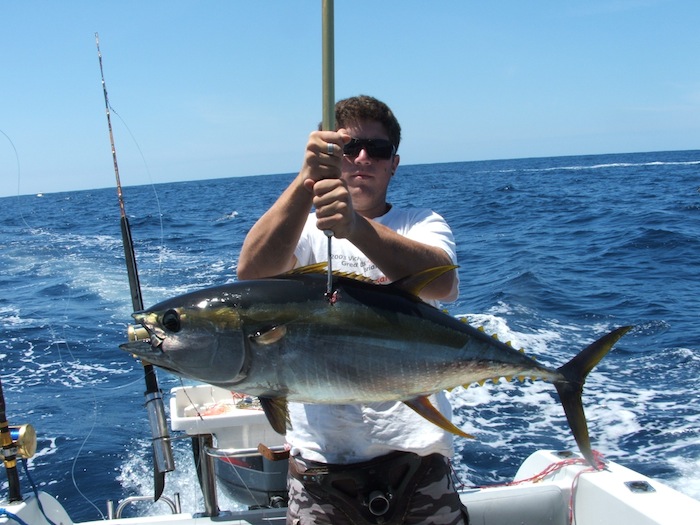 As air temperatures drop, it’s getting harder to find the motivation to put the boat in the water.  Never fear, the motivational saving grace for us on the lower east coast of NSW is the great Yellowfin Tuna fishing that turns on at the start of May and starts to taper off at the end of November as the climate gets warmer.  These Epipelagic predators have begun their annual migration down our coast in big schools, following cooler water temps and baitfish.  If you put the hard yards in with your research and put the hours on the water – you too can get into some awesome Yellowfin tuna action.

Yellowfin tuna, like all fish, are effected by lunar and tide patterns so keeping a diary on your fishing trips is the key to unlocking the Yellowfin code. Sunrise and Sunset are great times to target Yellowfin, but during the day a tide change will also see some action being stirred up as these fish venture into shallower water in search of food. In previous  era’s, tuna have been known to venture as close inshore as “The Peak” off Sydney or the fabled Montague Island off Bermagui. In those days it was a matter of dropping the anchor at a nearby inshore reef and feeding a live bait out whilst waiting for the tide change. Unfortunately, those days are long behind us. Nowadays, the hunt for the great Yellowfin tuna will take you out on the continental shelf where there is a whole lot of water between fish, so narrowing down your fishing areas before you head out is essential. If you are considering a tuna trip, it’s well worth spending some time on the internet before you head out.   My research tactic involves finding graphs of the area you are heading to, and searching them for temp breaks (particularly colder breaks) which are likely to be holding higher phytoplankton percentages.  Finding a food source equals finding fish, and a little time spent inside means better utilisation of your time outside, and a whole lot less blind trolling boredom (zzz).  Another great research method is to head down to your local fish coop and have a chat with some of the longliners – after all, for our hardworking longliners, it quite literally ‘pays’ to know where the tuna are. Underwater canyons and mountains beyond shelf contours are also a great place to target yellowfin. These places tend to hold bait, and thus predators in higher congregations, and at the right time of year, it can be as simple as driving out to these locations, starting a cube trail and waiting for the fish to find you.  Trolling Most of the time, chasing tuna involves spending hour upon hour scouring the ocean to find a fish.  The best way to maximise your chances of finding one of these golden torpedo’s is to drop some lures in the water and start trolling. 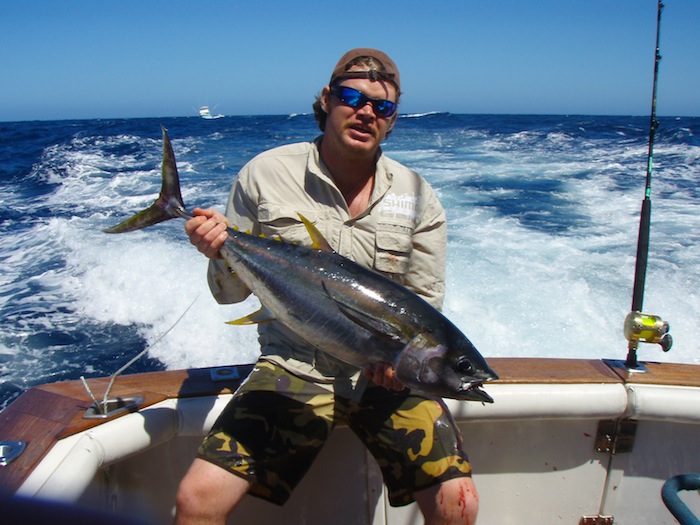 Trolling for yellowfin is very similar to what you would do in summer when chasing marlin. Keep a constant eye out for birds, current lines and bait – but Instead of targeting the hotter water as you would in summer, start crisscrossing over into the temperature breaks on the colder side. Occasionally, your typical striped marlin lure spread will see you bag a tuna, but a few simple changes to your spread can significantly increase your chances of a tuna bite.  Cedar plugs have been popular over the years but you can’t beat a couple of big loud hard bodied lures.  My standard lure spread consists of two small pusher marlin style skirted lures on the outriggers then two hard body lures off the corners.  It’s not uncommon to run into the occasional winter striped marlin as well , so having the skirts in the water is a good way to hedge your bets. Another great and sometimes overlooked lure is the old school Jet head with red and white feather skirt, rigged with a single hook.  These have proved dynamite on tuna for a long time. Don’t forget when you are targeting yellowfin that they don’t have a big raspy bill or sharp teeth, so don’t go too heavy on your leader – you will get more bites if you keep it light. 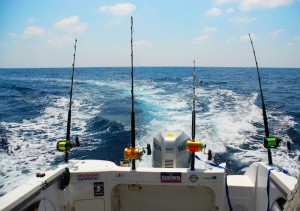 Cubing is a highly successful technique involving bulk amounts of pilchards or fish frames cut up and slowly dispersed into the water creating a big burley trail to bring the fish in, much like you would when snapper fishing on the inshore grounds.  The hope is that a big tuna will find your burley trail from the scent it creates in the water, then eat its way up the trail before gobbling down the piece of bait with your hook in it!  To make the most of your pilchards – cut them into approximately four pieces and slowly, but consistently, drop them into the water. The rule of thumb is that you drop in your cube, when the previous one is just about out of sight.  It is essential to keep your trail going(even when hooked up) at all times, as any break of the trail may cause the school of Yellowfin to disperse in search of a better source of food. You will need at least 20-30kgs of pilchards for a couple of hours of cubing, but it pays to take a little extra out with you just in case – it can take a considerable amount of time for Tuna to find your trail, and the last thing you want is to run out  burley just as the fish are starting to bite! Sometime’s it’s even best to start your day with a troll,  wait until you are hooked up to your first fish, and then start your cube trail at the site of your hook-up. Once your trail is well established, drop your rigged bait in. It is imperative your bait sinks naturally, so always keep the reel in free spool. If you’re fishing with modern heavy spin tackle and braided line, then it’s as easy as flipping the bail arm over and putting the rod in the rod holder and watching for that line to start ripping off the reel when you get bit.  If you’re fishing the more traditional overhead game fishing gear, then you need to be constantly pulling handfuls of line off the reel to get that cube to sink naturally. 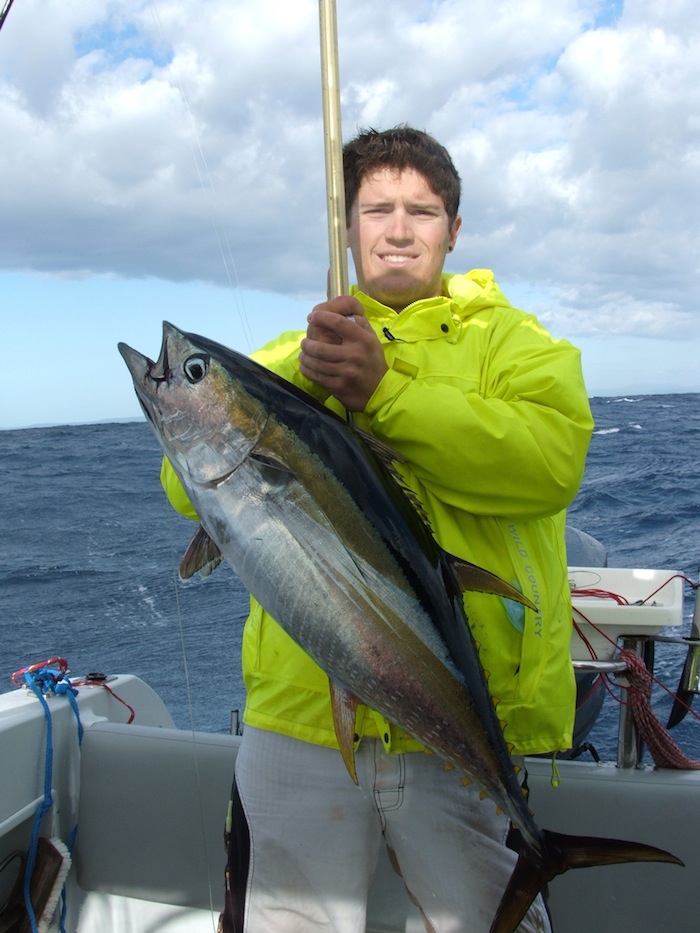 The addition of a live bait in your trail can also prove fruitful – so if you have the time, it can be well worth stopping at an inshore reef to collect bait before heading wide to the tuna grounds.  When live baiting, stagger your baits lengths to avoid tangles. If possible have the rods spaced out, a simple way of clearing your live bait from where you strip your cubes, is to stick the bait under a balloon/float or clip your bait into the outrigger (if you have them).  Live baits do become complacent after a while (even with a hook in them) so change them regularly so that there is always plenty of nervous energy in the water  for those hungry tuna to detect on their lateral lines. Another technique for firing up Yellowfin tuna is dropping a knife jig down to the deeper waters. Yellowfin rarely drop below the thermocline, but at certain times of the tide they can be found quite deep. If you find yourself a yellowfin, there is still a great chance of bagging an Albacore – plenty are caught using this technique and they are very tasty bycatch indeed! 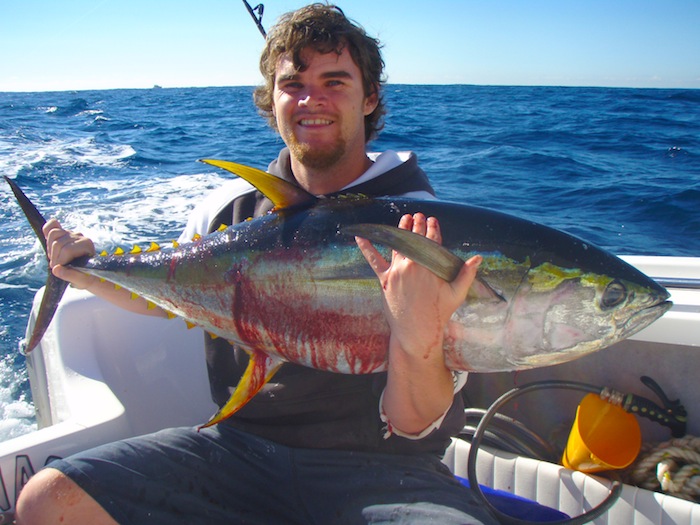 When you start talking about rigging techniques for cubing it’s amazing how complicated some people seem to make it.  The bottom line is that there is no hocus pocus 100% correct way behind rigging up, it’s entirely up to you.  It can be as easy as attaching a swivel from your mainline (as light a swivel as possible to keep a natural sink rate ) to your trace of 80lb fluorocarbon down to your hook.  Hook choice is entirely up to you but circle hooks can be a great addition to the free spool technique – when you do get a bite, all you need to do is tighten up the drag into strike or flick the bail arm over to set the hook.  If you know fish are around, but they are being finicky – try dropping your leader size, and if all else fails, run your monofilament mainline straight through to your hook.  The very neutral Ande Pink is a great line choice for this type of fishing, as it hides itself very well in the trail.  Preparing your catch: If prepared correctly, yellowfin tuna are one of the best eating fish in the sea. After going through so much effort to catch one of these beautiful fish, if you decide to keep it then please don’t let it sit in the sun on the deck all day. If you follow the below process, I guarantee you will be left with the best tasting tuna you will ever eat.
1.    Try to gaff the fish in the head If possible.  Stay away from below the underside and away from the heart.
2.    Stun the fish with a club so it doesn’t bruise by flopping around on the deck , then insert a brain spike into the soft centre of the brain (find this by running your thumb over the section between its eyes)
3.    Make a cut on each side of the fish about 2cm deep and  5-10cm long behind the pectoral fins. This cut should be perpendicular and across the pectoral fin recess. These cuts need to be made as quick as possible to allow the blood to clear. Let it bleed for at least  5mins.
4.    Make an incision 5-10cm long from the anus and cut out the digestive tube.
5.    Remove the gills and intestines in one piece by cutting the connection between the gills and lower jaw, and the gill collars on both sides of the head.
6.    Rinse with saltwater
7.    Wrap the fish in plastic if possible then get that fish on ice, or even better, a slurry of saltwater and Ice.(four parts seawater, one part ice)
8.    Cut out blood lines and nerves/muscle tissue when filleting
9.    Slice thinly and enjoy with some soy, wasabi and a cold beer