The NSW Mid North Coast is made up of several coastal communities and towns that host thousands of transient visitors each year. Passing caravans, backpackers, nightly stopovers and, of course, the school holiday crowd are all regular and seasonal visitors to the region. The attractions are varied, but for the towns of Forster and Tuncurry it is the crystal-clear water of Wallis Lake, world-class oysters and the feel of a country town on the coast that draws people.

Wallis Lake supports one of Australia’s best oyster-producing industries, and the associated infrastructure provides a vast habitat for diverse fish species. Hosting several bream fishing tournaments over the years, the waters are renowned for their big, blue-nosed, bream that spread throughout the lake and the rivers that feed it. Other species such as flathead, sand whiting, luderick and tailor are commonly caught, while prawns, blue swimmer and mud crab stocks are plentiful. 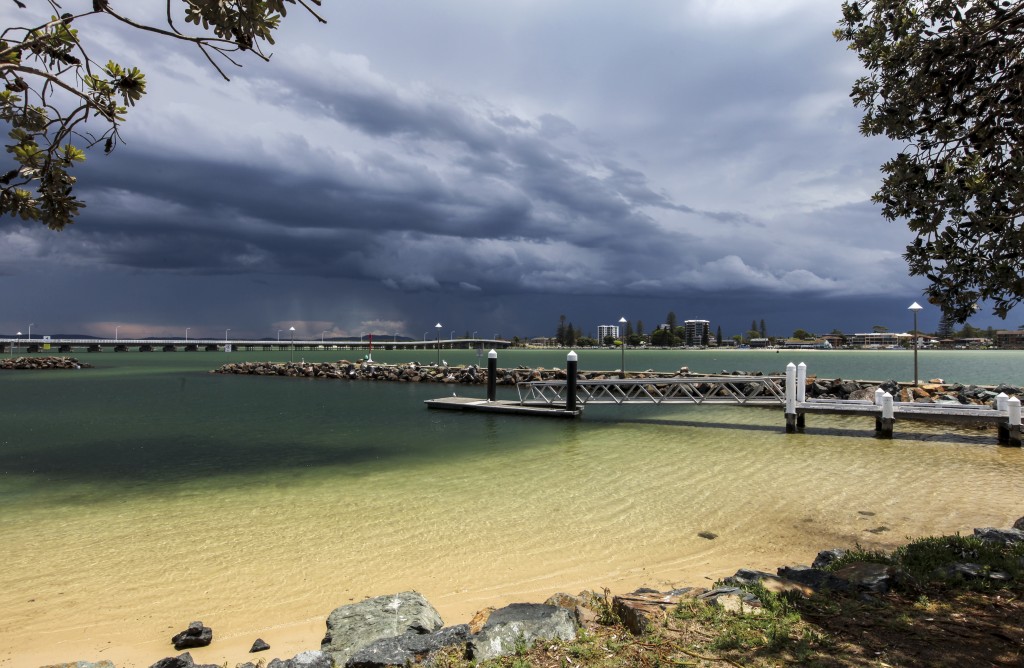 By far the greatest attraction to the lake and its entrance are the bream hiding in the vast area of oyster leases, both fixed and floating, that line the channels and bays. While industry harvests the oysters, the physical structure of the leases provide food and shelter to some big fish. Through the summer months the bream react well to surface lures thrown across the tops of the leases at high tide. The bream’s silver flanks can be seen shining on top of the racks and casting beyond them and working the lure back to their position will more often than not draw a response. A heavy leader is required if you intend to fish the leases, especially where you are casting two or three racks back.

The most popular spot, at the entrance of the lake near the bridge, is The Paddock, a large expanse of leases interspersed with channels and shallow weed beds. The relentless tidal movement has formed gutters and sand drifts that are perfect places to chase a trophy flathead or just a feed of whiting for the family. Drifting live baits or casting lures such as 5in Jerk Shads on a ¼oz jig head around The Paddock, on the run-out tide, is a great way to target the flathead that are often tucked up near the boundaries of the leases. The lease washboards, which direct the tidal flow along the structures, are prime spots to find the bream that forage in the eddies and slack current around the poles. Soft plastics such as the Gulp 2in Shrimp or 2½in Crabby, on a 1/24oz jig, and Cranka Crabs in olive, black and brown are by far my favourite washboard lures.
Fishing the washboards is simply a dead stick technique, where you cast your lure as close to the boards as possible and allow the lure to sink and drift with the current, while watching your line for ticks or pauses. If you are fishing by yourself this style of retrieve is best done travelling into the current, parallel to the washboards and casting forward. As the lure drifts back towards the boat you can recover slack line and easily detect bites. 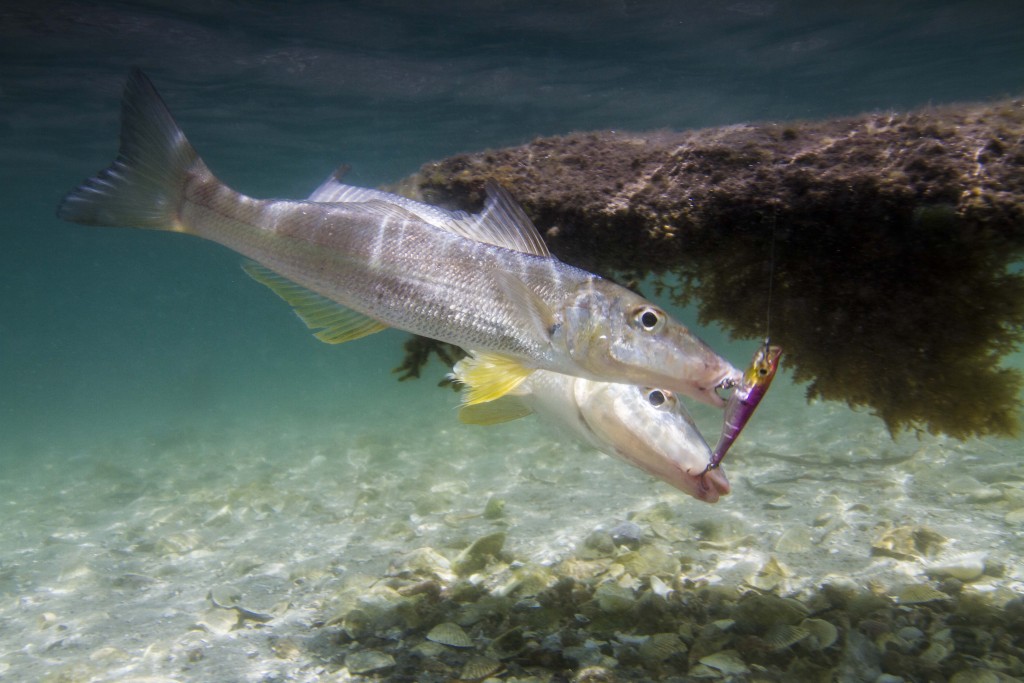 Whiting seem to be everywhere through the summer months. They migrate to the beaches, infest channels and sand flats and can even be encountered in the upper tidal zones. The spawning aggregation generally takes place from November and the fish are more than happy to attack surface lures that are moved along at a steady, reasonably fast pace. The area from the bridge to the breakwall is always a worthwhile prospect with a surface lure; while it doesn’t always produce, you need only spend 10 minutes to find out.

Far more productive fishing can be had during the evening when the daytime throng of vessels has retired from the water. Drifting live yabbies or worms under the bridge can produce a mixed bag of big bream, flathead, whiting and even leatherjackets, but be careful not to anchor and block the passages under the bridge. The best time to fish the bridge during summer is a run-out tide on the dark of the moon to coincide with the prawn run. Drifting your bait out the back of the boat while scoop netting the passing prawns is the best of both worlds.
If prawning is your focus, Breckenridge Channel is the most popular area. Snaking its way along Little Street, the channel funnels prawns from the back of the lake and concentrates them at certain areas in relatively shallow water. My advice is to find a congregation of pelicans and anchor up close to them. They haven’t gathered for a social event – they have come to feed.

Wallis Lake, and its vast, shallow basin that covers more than 90 square kilometres, is a haven for dozens of fish species, not least of which is the dusky flathead. The islands scattered throughout the system provide weedy edges, interspersed with mud or sand patches that support yabby colonies and in turn attract flathead, bream and whiting. The large females aggregate in the lower sections of the lake’s entrance during summer and a handful of male fish, from legal to 50cm, can be found by prospecting the shallow sand bars and drops-offs with lures and live baits.
The Step, where the main navigation channel enters the wider expanse of the lake, is a popular spot to spin and drift for flathead, while the eastern side of Wallis Island is perhaps some of the deepest water in the system (just over 2m average depth). The Step is also a great spot to set a crab pot or two, along the weed-fringed edge, for the abundant blue swimmers that grow in these waters. 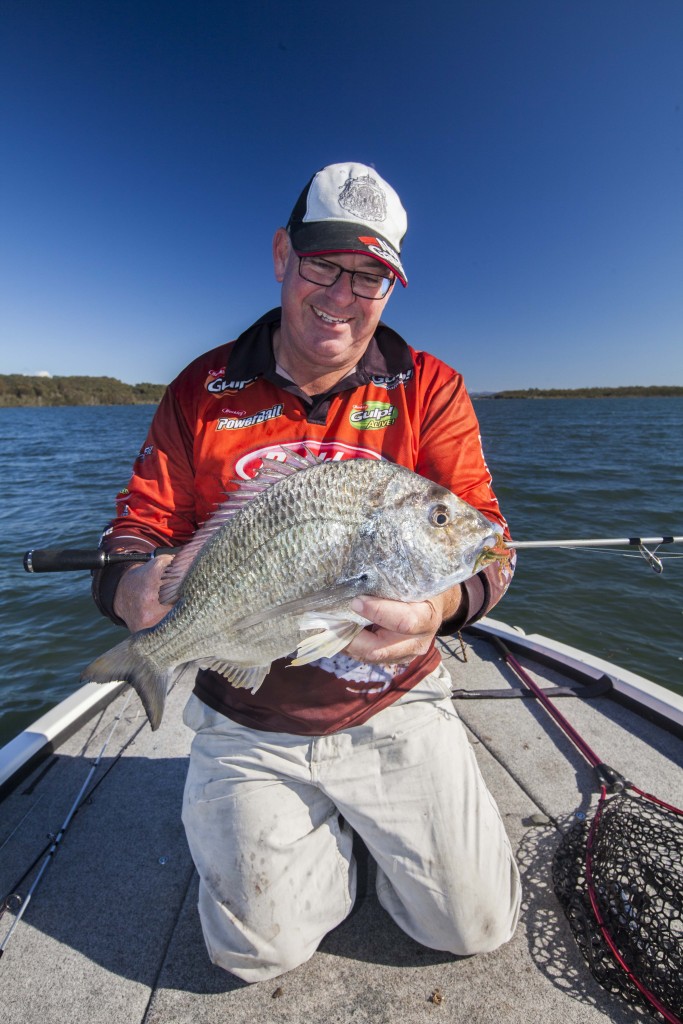 At the southern end of the system, Wallis Lake opens up into an expanse of weed flats with a mere metre of water over them at high tide. These flats hold some large bream and many of the bream tournaments hosted at Forster have been won on the flats with kicker fish well over 1kg. Lightly weighted soft plastics hopped and rested in the numerous sand patches throughout the weed beds is one method of fishing. Another is to retrieve your lure, hard-bodied or soft plastic, so it tracks just above the weed. Suspending hard-bodied lures are ideal as a series of pauses can be incorporated into the retrieve without having the lure float from the strike zone. Strangely enough, the flats tend to fish well only when the wind blows and stirs the surface into waves.

For the canoe and kayak anglers who want to escape the crowds during the summer holiday break I would suggest a trip south along The Lakes Way to Sugar Creek Road and follow the National Park road to the muddy boat ramp on the upper Wallingat River. It is surprising how many big bream move into this area and inhabit the shade of the mangroves and timber snags. Throwing surface lures onto the darkened water, above a sunken timber laydown, is certainly an adrenalin rush as the bream fight over your lure.
Prawn profile lures such as the Berkley 3B Pop Dog are ideal for this type of fishing and a slow retrieve with long pauses between ‘pops’ is the best technique.
It isn’t only the bream that move into the top of the Wallingat River. Flathead and some stud whiting lurk on the muddy bottom, and during late December through to May, mud crabs are certainly worth a fish along the fringe edge of the mangrove.
Access to the Wallamba River, through Nabiac, is also a great escape from the jet skis, boats and crowds and, like the Wallingat River, it holds some big bream, flathead and the occasional bass. 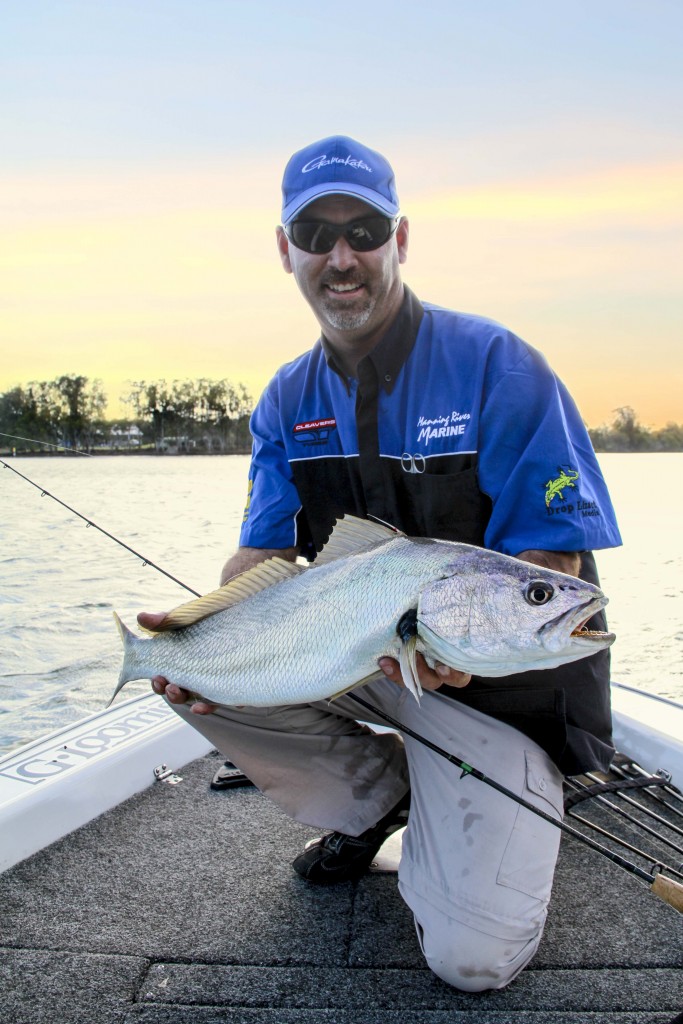 Like most populated estuarine locations, the entrance to the Wallis Lake system has a stone and concrete breakwall either side to guide the water through the bar. As breakwalls go, neither wall is very long and restricts the spots where anglers can fish, but the good thing is it also concentrates the fish in a small area. Jewfish are the premier species fished for from the walls and a variety of live baits or soft plastics and vibes all work at the end of the run-out and slack-water periods. Due to the volume of water that has to come in and out of the entrance, you need to allow three extra hours to the tide chart to get close to the times you need to fish. Mullet make great bait, caught in the lake and transported to the fishing spot, and often slimies and yellowtail can be jigged from the end of the walls or the Tuncurry side of the road bridge.
The walls offer a variety of species, such as bream, tailor, blackfish and leatherjacket, but can also surprise anglers with longtail tuna, kingfish and variety of sharks.
Drifting yabbies or cooked prawns with the current, on a lightly weighted running sinker rig, will pick up bream and school jew and occasionally oddities such as mangrove jack and sweetlips.

Accommodation varies from penthouse suites overlooking the ocean to caravan parks in close proximity to the launching facilities. The North Coast Holiday Park Forster Beach is central to the main street of Forster and adjoins Forster Harbour and the main boat launching facility in the area. For a more secluded caravan park, with its own shallow boat ramp, Great Lakes Holiday Park (BIG4) at Tuncurry is ideal. 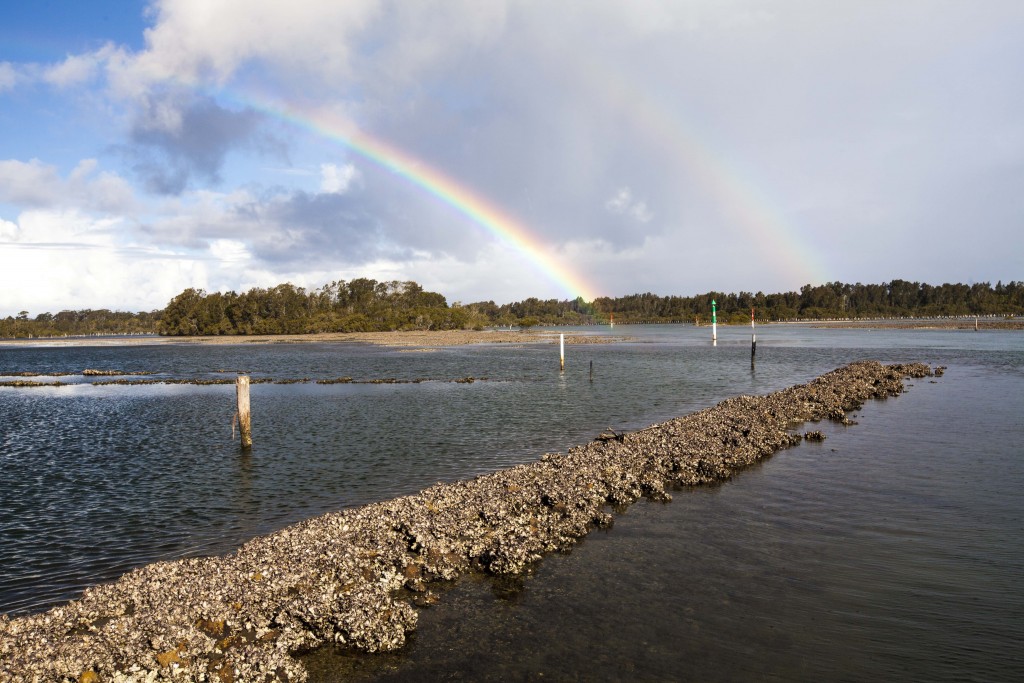 For large offshore boats there is really only one choice – the main boat ramp into Forster Harbour with a new boardwalk and four wash-down bays. Other ramps scattered through the area all cater for smaller boats but can suffer tidal flow, limited parking and a variety of launching surfaces. Tuncurry boat ramp has fish-cleaning tables but tidal flow can be a factor. The concrete ramp and wharf at Tuncurry make it ideal for smaller vessels and there is plenty of grass parking and a wash-down area.