There’s no denying the Murray River is a magical place and as one of Australia’s biggest rivers, it’s a massive piece of water to explore. I have always enjoyed tackling the Murray and even when the cod don’t play the game, it’s an enjoyable and soothing place to be. However, if the fish do decide to switch on, the river can produce the best fishing for large Murray cod you will ever experience. Throughout the length of the Murray there is a huge stock of big cod. This led me to embark on a massive two-week-long drift, fishing and camping my way down a massive section of the river in search of big Murray cod.

Catching big cod on lures can be a grind at the best of the times. Two weeks would give me the time to fish hard for a long time, to hopefully be on the water during a few bite periods but also allow me to drift up to 200km of river. I planned the trip for the start of the cooler months as the big cod move into the shallows and feed up over winter. This meant I could throw big surface lures and have a solid chance of catching some big fish on topwater. I picked a section of the river with some nice clear water where the big cod could see my lures, which is very important. Water quality is much more important than location on the Murray River and wherever the water is nice and clear is where the good lure fishing will occur, regardless of location. This is constantly changing on the river due to rain and changing flows so it’s best to check a few different sections of river before committing to a drift. 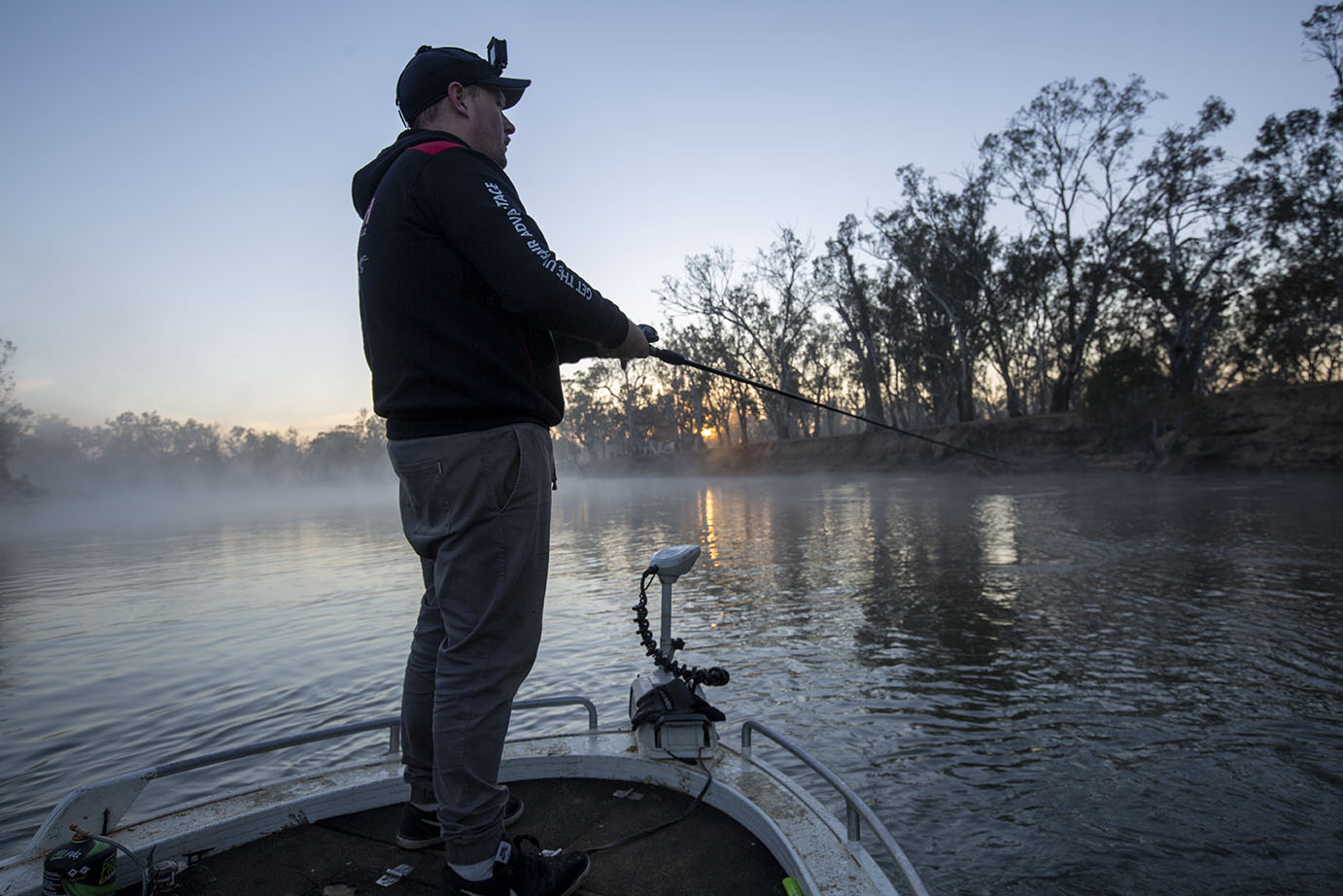 My starting point was just below Lake Mulwala at Yarrawonga and the plan was to drift with the current for two weeks. Swag, camping gear, spare electric batteries, solar panels, fuel, cooking gear and fishing gear were all packed into the boat, along with enough food to last me the trip. This meant my 4.2m tinny was fully loaded for a fortnight of adventure. I organised a mate to drop me off at Yarrawonga and take my car and boat trailer back home. I would call him when the two weeks was up so he could pick me up where I finished. This allowed me to drift freely and not have to worry about any distance restraints or meeting targets for where I had to get to.

Although there is phone reception most of the way along the Murray, there are still many places with no phone signal, and I did drift for a few days with no signal at all. This means if you are going to embark on a drift like this you need to pack well and be fully self-sufficient. I run an 80lb electric motor, so I run two batteries on my electric and packed two spares. This meant I could have the two spares charging on the solar panel while still running my electric motor, which is a necessity when fishing for cod. It takes about four or five days to flatten a pair of batteries, while a couple of good sunny days will recharge the flat set. I also have another deep cycle battery linked to a charging station on my boat so I could charge cameras, phones and speakers – this is essential. In terms of food and water, I packed what I expected to consume plus some extra tins and dry food in case anything happened. I have fished this water for years and while I had never embarked on a drift like this before I knew what the river was like and what I was getting myself into. The Murray River has an amazing amount of public access and camping, so I would simply pull up on one of the many sandbars at night to have a fire and camp. This makes for an amazing trip, regardless of the catches. I found drifting with the flow of the river and watching nature go about its everyday tasks really special; the world seems to slow down and you realise how busy our everyday lives are.

Thankfully the fishing was also amazing and I was able to boat nine big cod over the metre mark, with the biggest around 125cm. This was truly special fishing. I believe the drift allowed me to fish unpressured new water every session and this really helped the scorecard. There was no time spent running back upstream on the petrol each day and I was able to fish for 12 hours a day – I’d hate to think how many casts I put in over the 14 days on the water. My body was certainly feeling it by the end of the trip. But this is all part of fishing for cod and you never know when that one big bite is going to come. 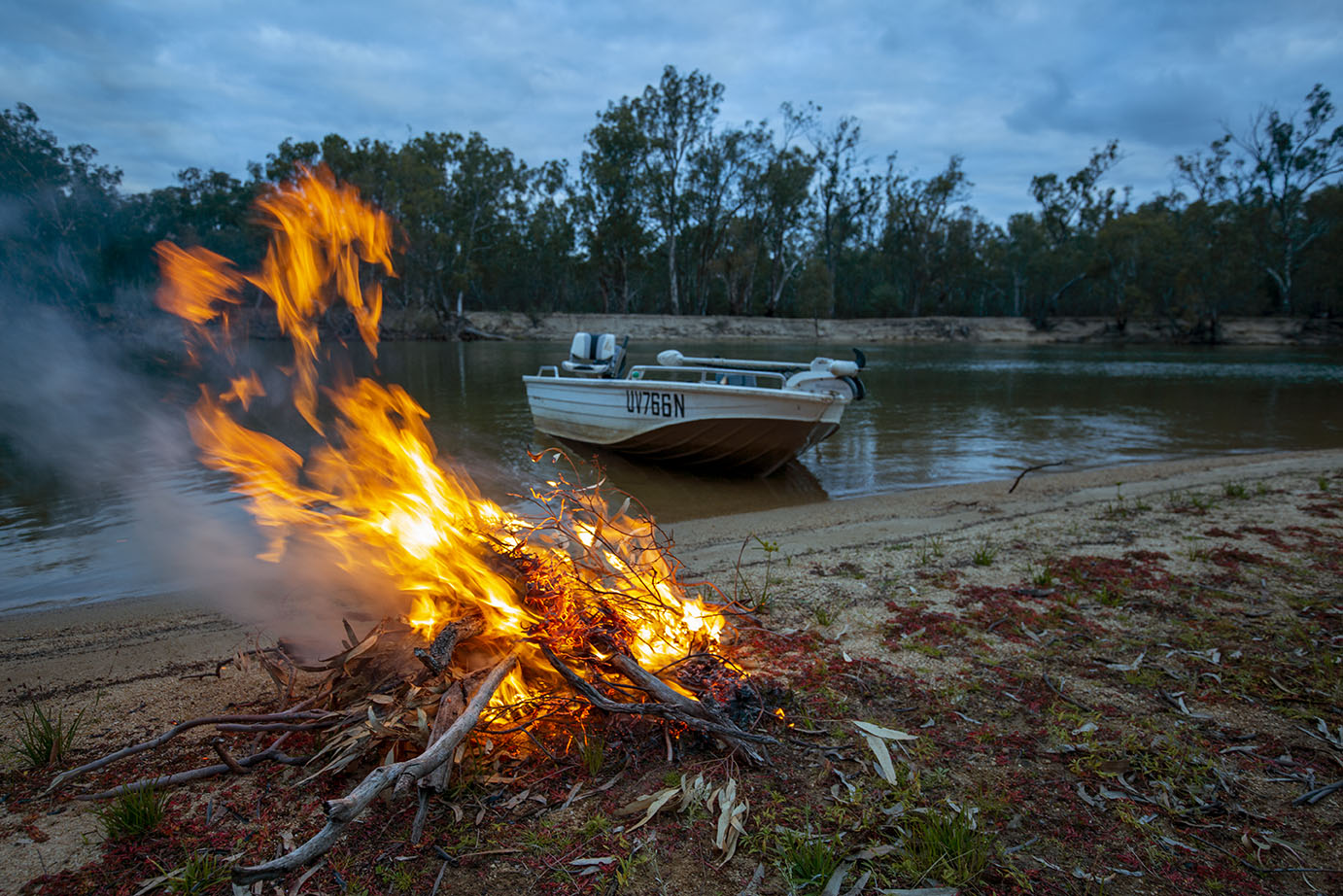 Throughout the 14 days I was up every morning before first light casting and stayed out to after last light every night casting. This took some serious determination, but I was rewarded for my efforts. This was highlighted one afternoon on day 7. I had cast all day from 5.30am till 5pm without a single bite. Feeling completely defeated and buggered I pulled up on a sand bar at 5pm with an hour of daylight left, where I got my fire going and rolled the swag out on the bank. I needed an afternoon off and was convinced today just wasn’t a bite day. I sat by the fire for 15mins and took some photos and relaxed before my inner cod conscious started to eat away at me, demanding “You can’t just sit here on prime time”. For some unknown reason I convinced myself I better get my ass back in the boat and at least fish the 10 snags right in front of camp for the last-light bite time.

About four snags in, at 5.30pm the biggest fish of the trip ate my surface lure. This made me realise determination is the most important trait you can have as a cod fisherman – never give up! I was exposed to all periods during the drift, and had days where it was all fired up and I was boating three big fish in a day. Then I had the complete opposite, going three days with hardly a bite. This is just how river cod can be and sometimes it’s easy, other days it’s hard work. But you can generally bet that if you go and put the effort in with some nice clear steady water, it’s only a matter of time until the results unfold. It can be very hard to pick the bite times for big cod, although on this trip I did find the lead-up to stormy weather produced a few good bites.

I really focused on throwing big surface lures and all the fish were caught using this technique. Big surface lures work amazingly on big cod in the Murray and are really suited to cool water 1m to 4m deep, like the section I was fishing. The big surface lure I chose to use all trip was a Balista Tremor. When throwing a big surface lure for cod, a 7ft+ length medium swimbait rod with a 2 to 5oz cast weight is perfect. I match this with a strong baitcaster reel with around 10kg of drag. I spool this with 50lb braid and run an 80lb leader. I have the drag locked right up so the fish will only pull drag just before breaking the 50lb braid, and this helps to drive the hooks in. By far the best times to throw surface lures is first light and last light, so you can have a small break during the day if need be. The big fish will still eat surface lures during the day so don’t count yourself out, as I had bites at 10.30am, 11.30am and 1pm, particularly if it was overcast and cloudy. Simply cast your big surface lure at the snags in the river. 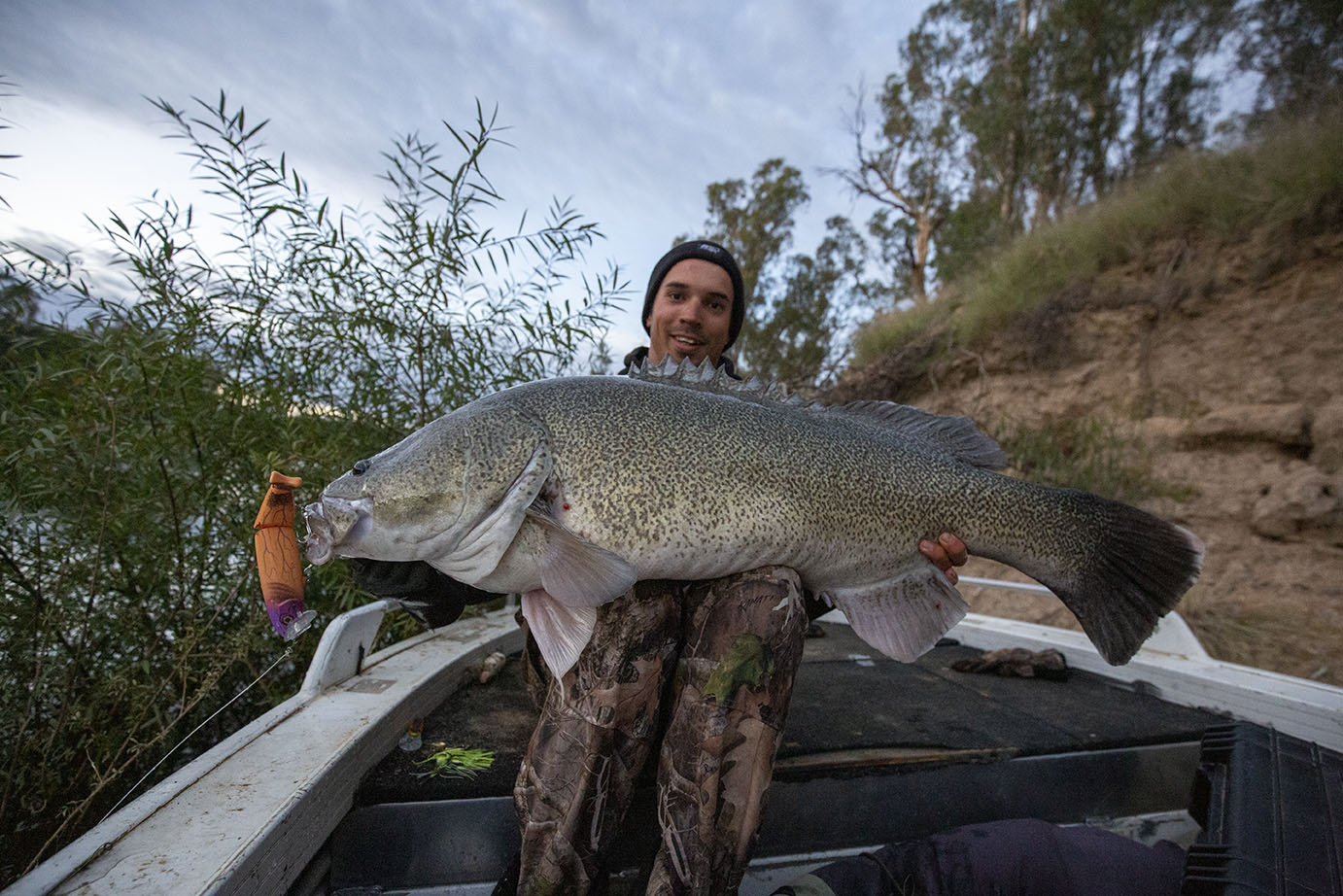 The cod love sitting on and hiding in the big submerged logs in the river. They can appear from anywhere on the log and will destroy your lure in a matter of seconds when you throw it into the right log. I had good results casting surface lures during my trip, so I persisted with this technique. However, if the fish are not hitting the surface lure, go for a big spinnerbait or hard-body lure and target the same logs. It’s important on a trip of this length to adapt and find what the fish are biting on, otherwise it could be a very long two weeks. Pack plenty of tackle and lures for the different scenarios!

I have uploaded a vlog-style video to YouTube of the fortnight – just search colbylesko on YouTube for a more in-depth look at the trip.

By the end of the trip, I had travelled over 200km of river and a target of 15km a day is achievable if you are in a freely flowing section of the river. If you are planning to fish in a lock or weir pool, 10km of river would be a more achievable target. This trip was the biggest cod fishing trip I have ever done, and it really tested my patience and body to the limit.

So, if you’re embarking on a trip of this size make sure you are ready for it and maybe do a smaller trial run first. Having said this, it was one of the best and most rewarding trips I have ever done, and the effort was rewarded in terms of many big fish. There was also something strangely satisfying about living from the boat and being at the mercy for the rivers flow. 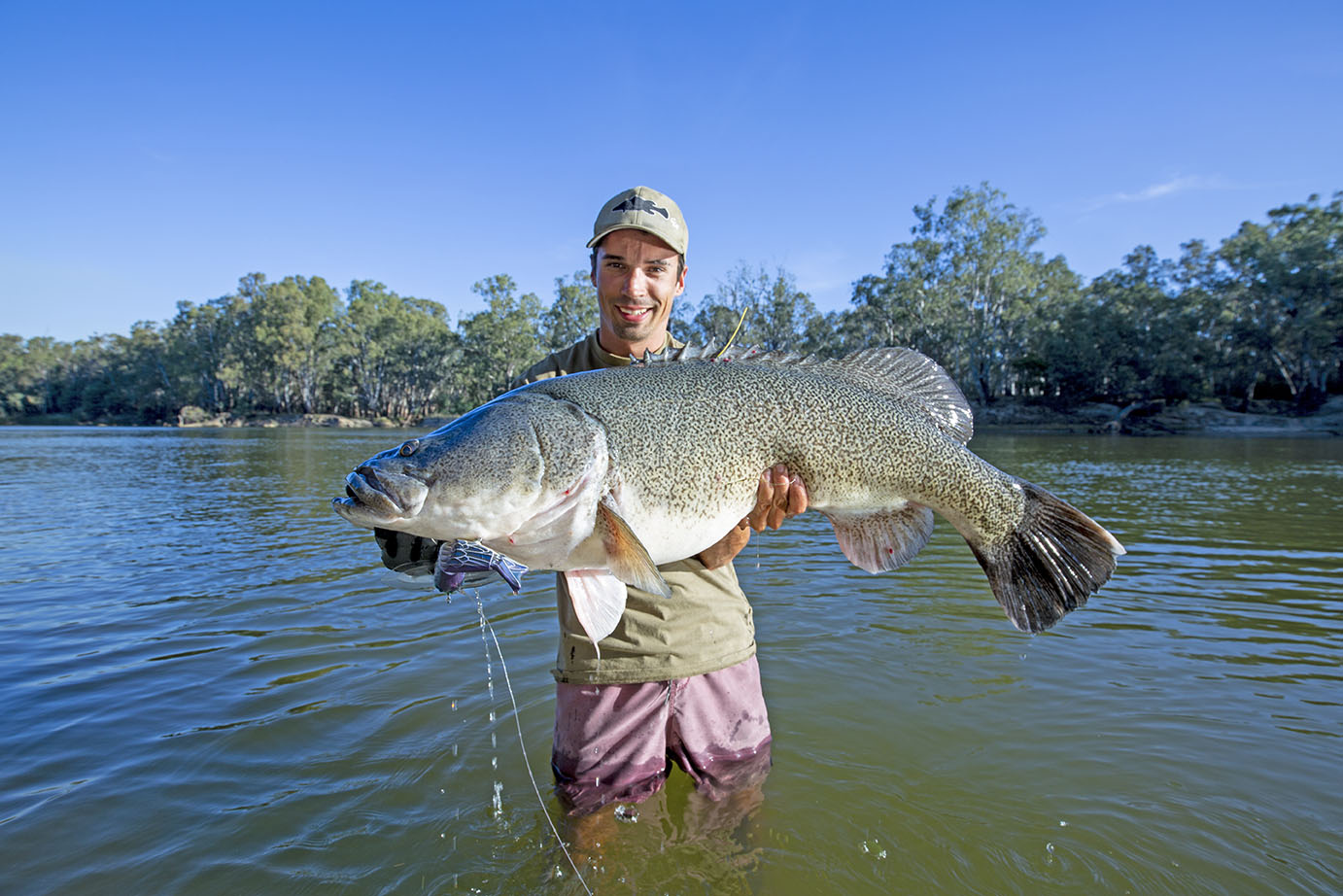