Situated three and a half hours North of Brisbane, lies a hidden sportfish mecca known as Hervey Bay.  Hervey Bay with it’s close association to Fraser Island, and it’s gin clear waters, warm cobalt currents, and close proximity to the reef allows for the perfect fishing holiday whatever game you like to play. Fraser Island not only has acres of pristine fishing flats, but it also allows for significant protection from southerly winds allowing smaller vessels to access quality fishing that is not as available in more open ports. Whilst the 60km run to deeper water can be a tough one (especially in a nor-easter or outgoing tide) – the effort is so worth it!

Hervey bay is a beautiful coastal town that has experienced some significant growth over the last few years.  The majority of the community is made up of retirees looking for some coastal paradise in which to live out their golden years, and who can blame them… it is a paradise!  The town itself is set up well for both boating and fishing, with many tackle shops in town and great ramp facilities available in the harbour itself, including fuel and right next to the ramp. The ramp itself has been very well thought out, with two ramps available, floating pontoons and plenty of rigging bays and parking to allow a free flowing stress free launch and retrieve, even in peak times.  Plenty of accommodation is available throughout the town for fishos, such as rental houses and caravan parks.  Harbour View Caravan park is a great location for boaties being about a minute’s drive from the ramp, this makes those long hours on the water a lot more manageable. 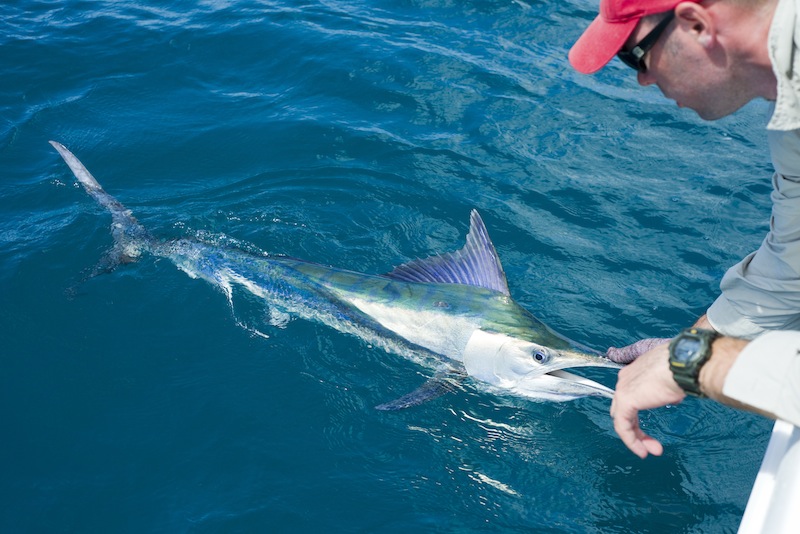 When fishing any new location, it pays to do your research before launching the boat. Spend some time checking reports for key locations, make sure you have a good quality map or chart plotter that shows navigation marks, or even better, get some info from the local fisherman that know where to go.  Hervey Bay is no exception to this rule, as to get out to towards the main channel you need to navigate your way through some really shallow sections that can be very dangerous at times – especially if you find yourself on the wrong side of a channel marker on a surging outgoing tide.  With such an expanse of water, make sure you have all your safety gear and extra supplies such as water, fuel and food.   If you do find yourself suck on a sandbar or worse it may be a while before you see another boat.
The Fishing

With so many fishing options available to you, it’s hard to make a decision on where to begin. Hervey bay seems to be set in the most prime fishing real estate available, offering both line burning pelagics and exotic reef species that are synonymous with Northern Queensland fishing. In addition, Hervey Bay also offers some of those bread and butter species such a snapper, kingfish and whiting which are icon’s more associated south of the border. Given the long trip out to the reef or the tip of Fraser –  it’s well worth going the distance early morning before the wind comes up.  Once you get out to the edge, it’s another mind bender picking what to chase, as more times than not, the surface action will be firing – making it hard to go past this without having a cast. 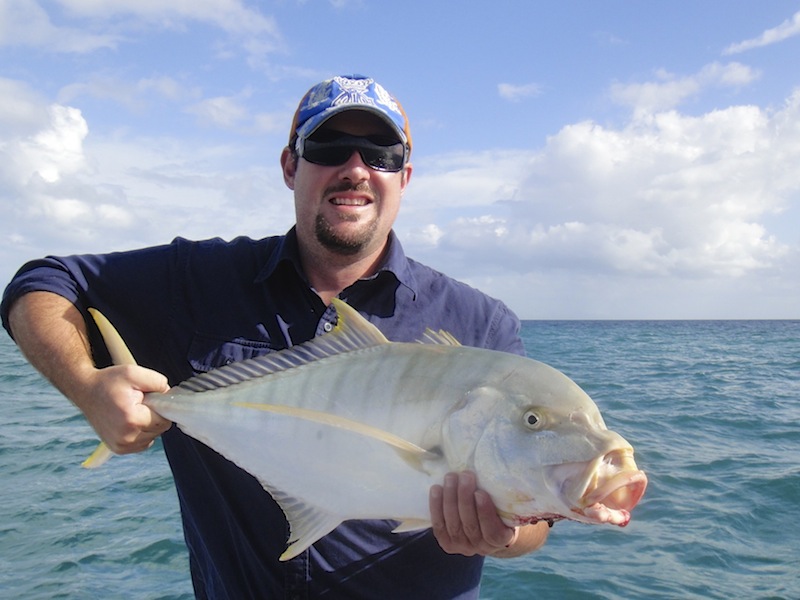 When you’re fishing the surface schools, make sure you try not to run over the top of them. Employing the drift and kill method works well especially if more boats are fishing the same school, though i have never encountered this issue –purely due to the sheer amount of surface schools working at one time! The Drift and kill method basically involves working out what direction the school is headed, shooting over there quickly in the boat, then cutting the motor a significant distance away from the school. This allows the boat to drift up onto the school without spooking them as they can be very flighty. Fishing species available on these schools during summer ranges from small black marlin, mackeral (both Spanish and spotted), and several tuna species such as mack tuna, longtails and yellowfin. One major playing point in the fishing here was the tide changes. Fraser Island is home to thousands of birds that, if kept an eye on, will basically tell you when and where to fish. It was amazing to see them just sitting on the beach chilling out until the tide starts to change. As it comes up to the change these birds would take off and head out to the channel to find the food. Two hours later it was as if someone flicked the switch and they would head back to the island to wait for the next change.
The Flats

With acres of beautiful shallows it’s hard to know where to start but sight fishing these areas can be very rewarding. At this time of year the golden trevally will start to feed, and as the tide comes in, they can be seen tailing around the flats, sifting food out of the sand.  Longtail (northern Bluefin)Tuna can be seen at times buzzing through the crystal clear water smashing garfish and even the occasional sight cast marlin in three metres of water is not an uncommon capture at this time of year.  Pushing into these shallow areas requires some serious stealth and should be done by electric motor or a flats pole. If possible, getting to a higher location on the boat such as a cast deck or even standing on the gunnel will allow you to get a better view when looking for fish.  It’s also a great area to take in some other beautiful aquatic life that live in this thriving ecosystem –  it’s not uncommon to see turtles, big shovelnose sharks, seals, dolphins and even the occasional dugong if you’re lucky.
Trolling

Trolling is a perfect method to cover some ground and find some of the bigger fish that are present in the waters off Hervey Bay.  If you’re out just chasing small black marlin, skipping garfish along the edge of the deeper water is a great option to remove a lot of by-catch such as mackeral and smaller tuna. This technique also allows you to free-spool the bait and should get you a better hook-set on those little beakies.  As an alternative, pulling small pushers will find you some Marlin, but also give you a chance at a big mackeral or perhaps a wahoo or dolphin fish that are great table fish. These species will tend to be a bit further out of Fraser, but with warm currents pushing in you will be amazed what you find just off the shoreline. 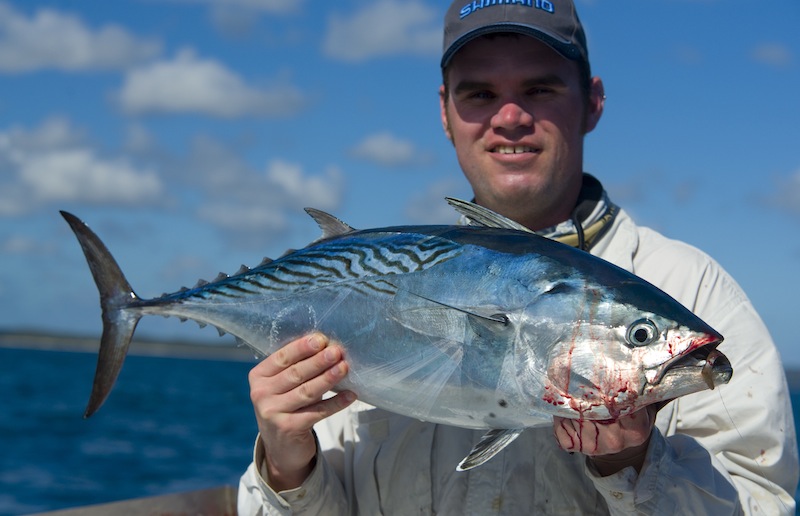 For those fisho’s that like tussling with fish such as large mouth nannygai, the occasional coral trout and some other great eating reef dwellers, then there are some options available off the coast as well. It is, however, a significant run from the Harbour.   If you have a larger boat and have the ability to live onboard for a day or two at a time, this is the place for you.   Anchoring up at night on the inside of Fraser will give you ample protection and allow for an easy run out to the scattered reef the next day, and makes for a great weekend.

If you don’t have a boat, there are options available on Fraser Island itself such as great off road driving or adventure tours that will give you a shot at some great landbased fishing.  I’ve no doubt that spending some good hours on the sand can land you some similar captures to the boat brigade.  At Hervey Bay itself, you have the Urangan pier that over the years has seen some very substantial captures for those willing to put the hours in.  A long with most quality fishing spots, there are plenty of fishing guides available to take you out for a days fishing, including some fly specialists if that’s your thing.  If you prefer to give it a go yourself you can hire boats from various places.  Unfortunately like most popular spots, Hervey Bay is vulnerable to overfishing from commercial fleets and recreational fishermen are at risk of being locked out completely by our government.  Thankfully a group of anglers who have realised the need for a unified voice in the community have come together to support and protect recreational fishing for our future and build better facilities for fishermen.

For more information please go to there website www.frasercoastfishingalliance.com.au or check them out on facebook.
Fishing  Hervey Bay is one of the most beautiful destinations on our eastern coastline and highly recommended to anyone who loves fishing and a bit of adventure.