In its almost permanent state of silence, Lake Macdonald is situated roughly six kilometres from the small township of Cooroy on Queensland’s Sunshine Coast. The picturesque landscape makes for a lake that is a superb recreational destination, with permitted activities including horse riding, boating, camping and canoeing. An important point to note is that combustion engines are prohibited and boats are permitted to operate under electric power only. 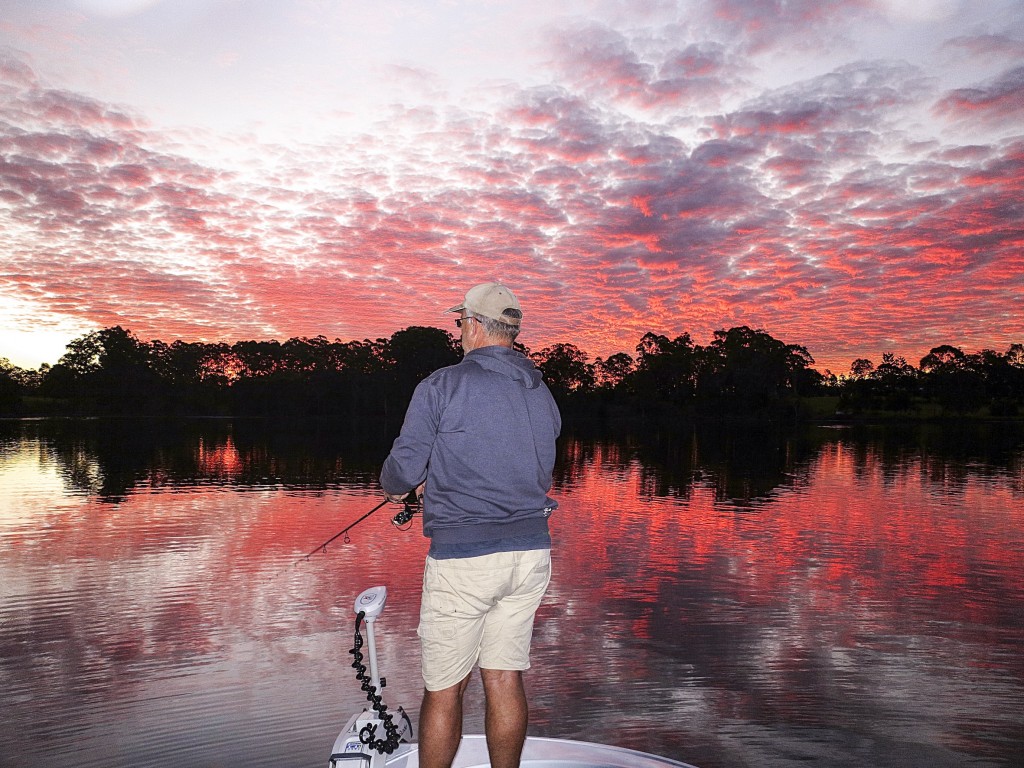 There are two main boat ramps on the lake: one on the Botanical Gardens side and the other, more popular ramp alongside the Gerry Cook fish hatchery and adjoining campgrounds. Boating permits are not required, but anglers do require a Stocked Impoundment Permit (SIP) for the lake, which can be obtained online from the Queensland Fisheries website (daf.qld.gov.au). The lake has been stocked with native species, and anglers’ contributions go towards future stocking programmes for all to enjoy.
Another very handy guide that will give detailed information and maps can also be found online at the South East Queensland Water website (seqwater.com.au).

Lake Macdonald is home to numerous species that include Australian bass, golden perch (yellowbelly), silver perch, Mary River cod (no-take species), saratoga and eel-tailed catfish. Finding larger sizes of any of these species is often a challenge; fish in these man-made environments are well educated and aren’t easily fooled. They are highly sensitive to changes in weather, water temperature, barometric pressure and rain, and change their eating habits more so than their cousins out in the wild. Throw in a large body of water and you can quickly start asking questions about the puzzle that stares at you upon launching. 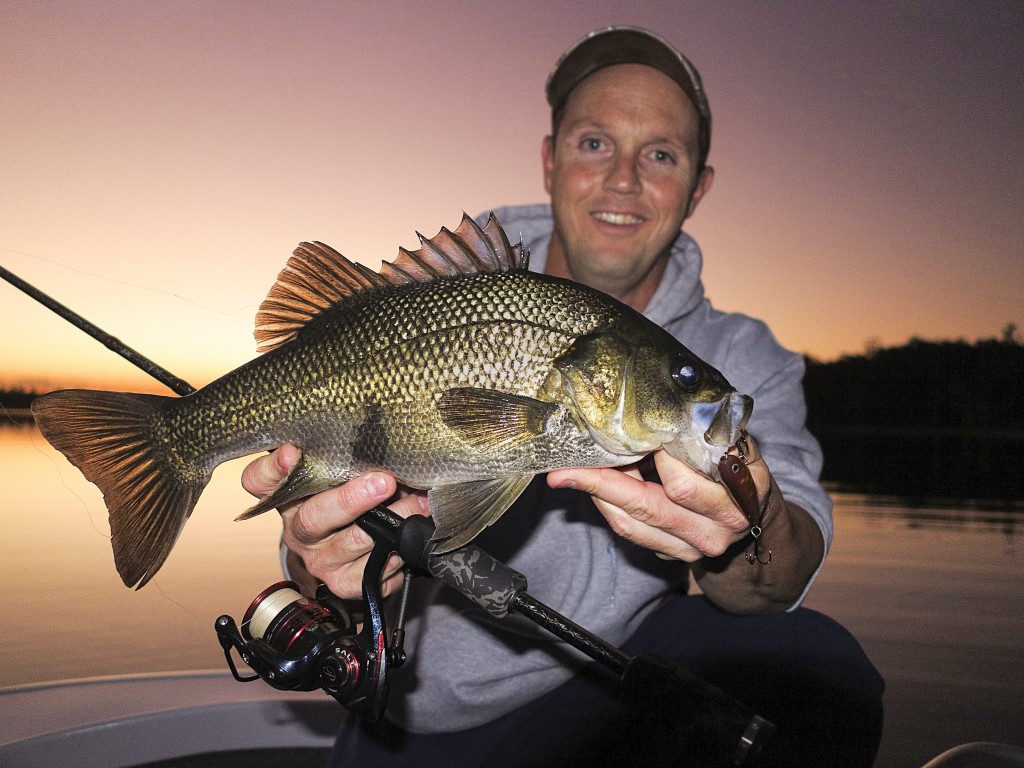 Australian bass: These are without question the most popular target species throughout Lake Macdonald and it’s simple to explain. Throughout the lake, bass can be every bit as timid as they are aggressive and I have lost count of the times I have had a sounder full of bass and struggled to get a handful of fish. They can often be very wary, feed cautiously and spook easily after a few fish have been hooked. In saying this, they can be caught on a variety of lures, flies and baits. If fish have been located on your sounder, schooled or more actively feeding throughout the water column, you have many options when it comes to lure presentation. Soft plastics, small blades, soft vibes and spinnerbaits will all work well on the resident bass – though what will work really well one day may not necessarily work the next. Given that the fish will often be feeding on smaller bony bream, it makes sense to imitate this food source as closely as you can. There are days where a small shad-type soft plastic will be the preferred choice, whereas on others the vibrations pulsating through the water from a blade will get more hits. A tackle tray featuring a good variety of lures is strongly advisable when targeting bass throughout the deeper sections of Lake Macdonald.

Another exciting way to tangle with the lake’s bass is along the dam edges. In many instances the margins will be lined with lily beds or weed. Some see the weed as problematic but this slimy vegetation also offers shelter for bass and vast areas in which they can hunt for shrimps, yabbies and smaller baitfish. When it comes to the edges, your lure selection does need to be well thought-out and there are several options. Surface lures are my preference as they can be worked freely without the risk of a foul-up and the visual excitement they offer is little short of addictive. Having a dark to almost golden-coloured bass launching clear out of the water in a destructive surface explosion is a scene that will have even the most seasoned of bass-hunters craving more. Lures that work best in this field are smaller surface-walking stickbaits up to, say, 80mm, surface poppers and the many frog imitation lures (soft and hard) that have really exploded onto our lure market. Soft plastics rigged as weedless presentations (using a worm-style hook) are also effective through the vegetation and, slowly rolled among the weed, can generate many aggressive bites. Shallow-running suspending divers are also worth casting along the edges and will do well in many instances but be very mindful that the weed can be very thick at Lake Macdonald and constant foul-ups can be very common when running trebles.

Yellowbelly (golden perch): There are many anglers yet to catch their first yellowbelly, or golden perch, but once they do the immediate reaction is that they simply want more. There is something seriously addictive about these fish and given that they are far more of a challenge throughout Lake Macdonald, I really enjoy specifically targeting them. To be honest yellowbelly often come as by-catch while casting blades and soft plastics down deep, but you can also head out with them as your firm target. 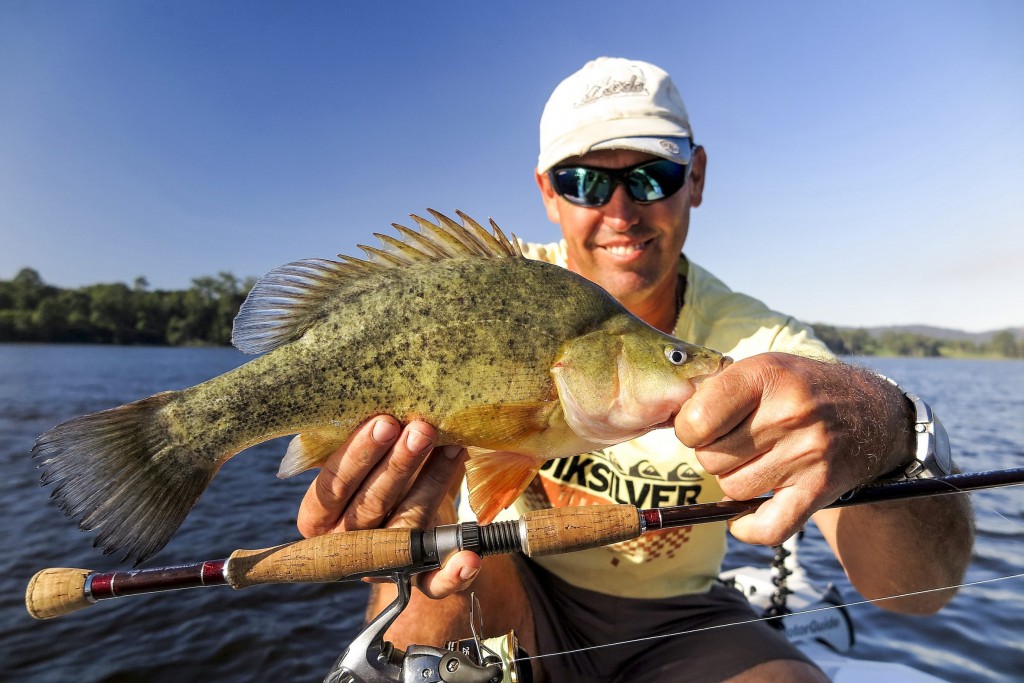 There are definitely specific areas that these fish prefer and having caught many of these fish throughout the lake I can safely say they prefer to sit on areas of gravel and rubbly rock. The rocky wall that features the pumphouse (which keeps the dam aerated) is a great starting point and there are smaller areas of rock scattered along the bottom towards the actually dam wall, or spillway.
These areas can be rather tricky to fish and anglers will commonly snag up smaller blades and vibes and become frustrated. My common approach is a soft plastic rigged weedless, while incorporating a Texas-style rig where a small conical lead head runs down to the plastic. To be even more specific here, soft plastics that imitate a worm are absolutely deadly for yellowbelly and my clear favourite here is Berkley’s three-inch Nemesis, which has accounted for nearly 100 per cent of my fish. Patience is the key with these more sluggish feeders and another important factor to be mindful of is to slow down your lure’s retrieval. Always bear in mind that the food sources you are looking to imitate (earthworms or grubs) are NOT moving fast and the name of the game is to make things appear natural.

Silver perch: Yet another resident of Lake Macdonald, characterised by a small mouth and head relative to body size. To specifically target silver perch in the lake would be a mission of much misery and many fishless outings. Their movements are as mysterious as the fish themselves; silver perch are known to be very smart and seldom seen. They are an occasional taker of lures and flies and, as a result, most captures occur when targeting bass – the silvers do appear to be mixed in among the schools of bass.
Bait fishermen will catch far more silver perch than lure anglers and the number one all-round bait would be garden worms. Very light lines and small hooks are also best for dealing with the fish’s tiny mouth. 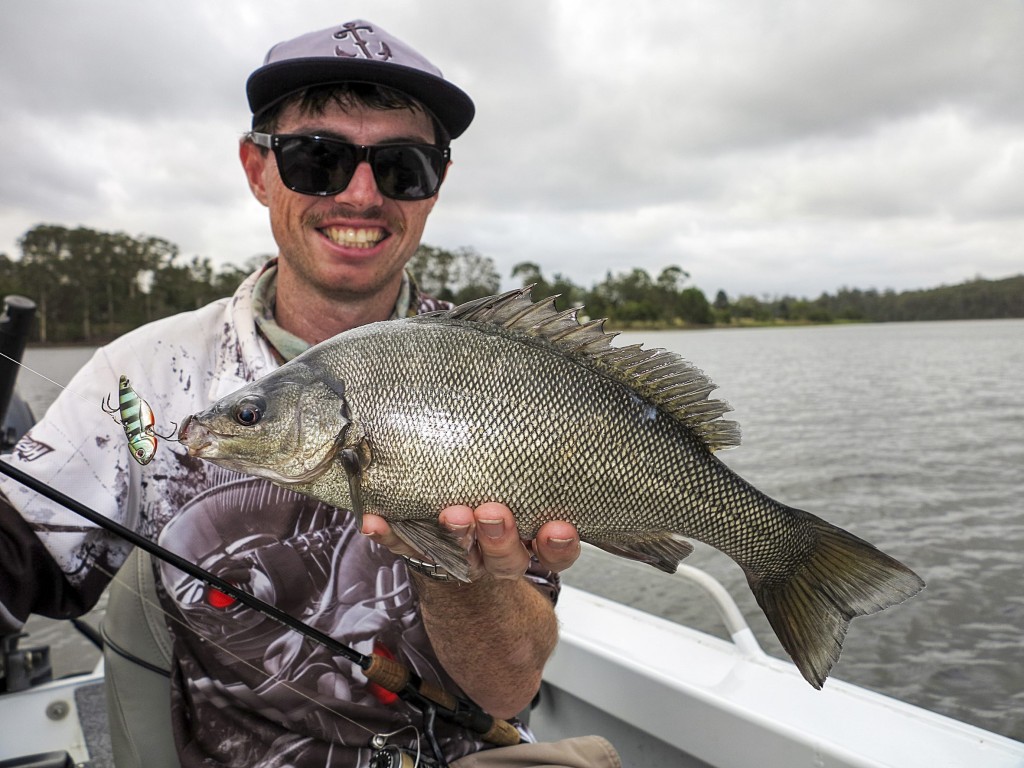 Saratoga: These were a species that were part of the lake’s original stocking programme but sadly no longer feature on the re-stocking list due to their being deemed not native to the area. Some good news is that saratoga still lurk throughout Lake Macdonald and although many have gone over the dam wall in floods, fish are most certainly still there. With the thought remaining residents are now breeding, we can only hope numbers continue to grow and these sensational prehistoric fish become very real targets throughout the lake.
The majority of captures are while targeting bass along the dam edges using surface lures and flies, and there is always the chance a saratoga could crash-tackle your lure at any stage. Landing these fish is always difficult due to their very hard, bony mouth making hook penetration problematic. Always be prepared, and make sure every lure you cast across the lake is armed with needle-sharp trebles or single hooks. 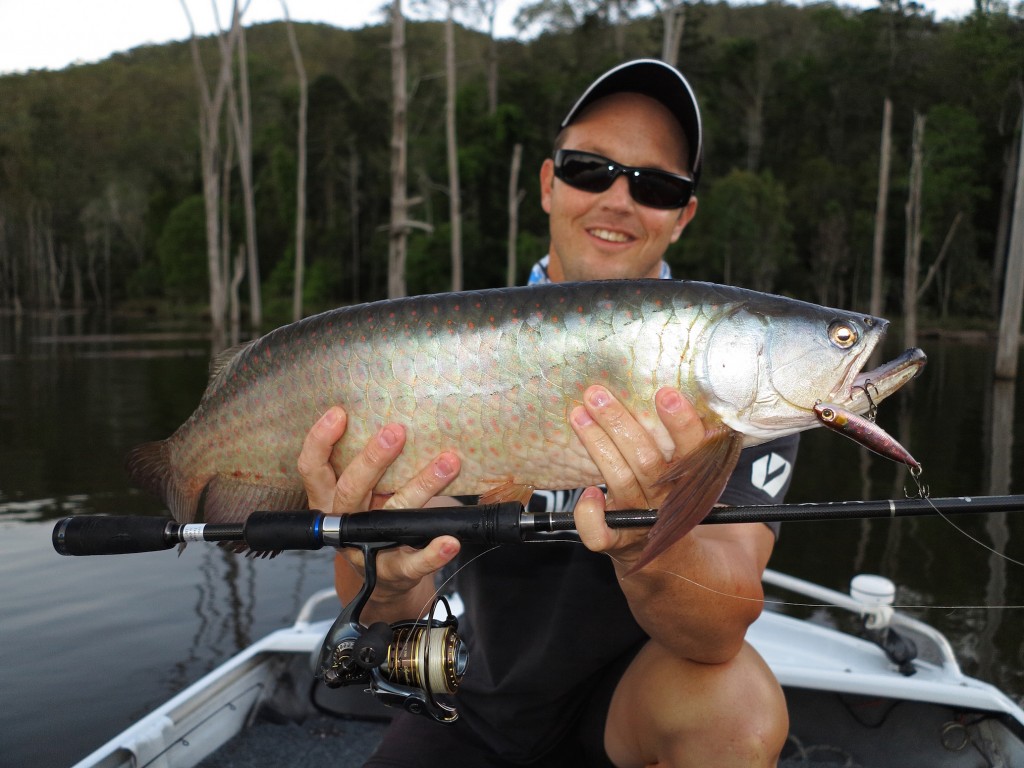 As with any angling there are always going to be seasonal changes and other weather that will change fish behaviour. A simple example is where bass school up heavily in the winter months, whereas in summer they will spread far and wide. Another scenario is that through the cooler months the edges are best fished during the afternoons after the sun has warmed the shallows. The reverse is true in summer, when the mornings are the far better period before the water becomes too warm. The more you adapt to change while thinking about fish behaviour, the smarter you can become and maximise your chance of success on the water.

Lake Macdonald remains one of our very special impoundments and it is an absolute privilege to cast a lure across or soak a bait. Travelling anglers will not only appreciate the surrounding serenity the lake offers, but also the stellar fishing that is readily available.