The mighty and magnificent Lake Eildon is fast becoming the stuff of legend when it comes to freshwater fishing in Victoria – and, indeed, Australia.

With Fisheries Victoria undertaking massive stocking programs in recent years, including an extra one million Murray cod from 2011 to 2013 and a record stocking of about 250,000 golden perch last year, this native fishery will only continue to grow.

Although this massive lake system holds healthy stocks of Murray cod, brown trout, redfin, carp and roach, and variable levels of rainbow trout and even occasional river blackfish, for this article I will concentrate on the ever-popular golden perch – or yellowbelly, yellas, callop, Murray perch or whatever other regional names these fish carry. For the purposes of this article let’s stick with golden perch or “goldens”, just to keep it uniform. 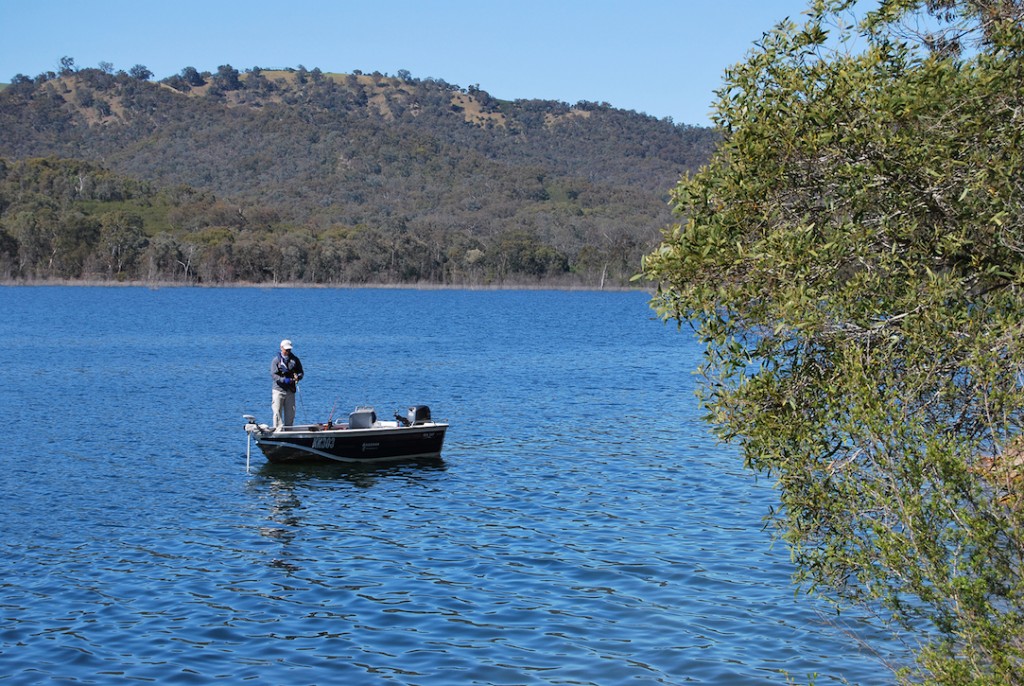 Lake Eildon, approximately 140km north-east of Melbourne, is a huge man-made lake system constructed from 1915-29 and used for irrigation, potable water and the generation of hydroelectricity. The lake covers an area of 13,832ha and has a mean depth of 24 metres at a capacity of 3,334,158 million litres! That’s a lot of water in which to try finding a fish. Hopefully I can help with a few tips on where and how to encounter these XOS goldens.

Golden perch (Macquaria ambigua) are an Australian native fish with vast distribution throughout the Murray-Darling system. A highly valued sporting fish with good eating qualities, they will readily attack lures and various baits including some of the favourites such as Murray shrimp, yabbies, worms and fish. Although they are prolific breeders, with mature female fish capable of laying more than 500,000 eggs, they do not successfully breed in stillwaters such as lakes, including Eildon. Due to the eggs being neutrally buoyant, on spawning the eggs will simply drop to the bottom and suffocate unless suitable water flow is available. On top of this, the feed supply of microscopic plankton required by golden perch larvae is reliably triggered by flooding and covering of previously dry ground. Factor in required temperatures of 23-25C to trigger spawning and the chances of successful breeding in Lake Eildon is, at best, minimal, hence the need for stocking. 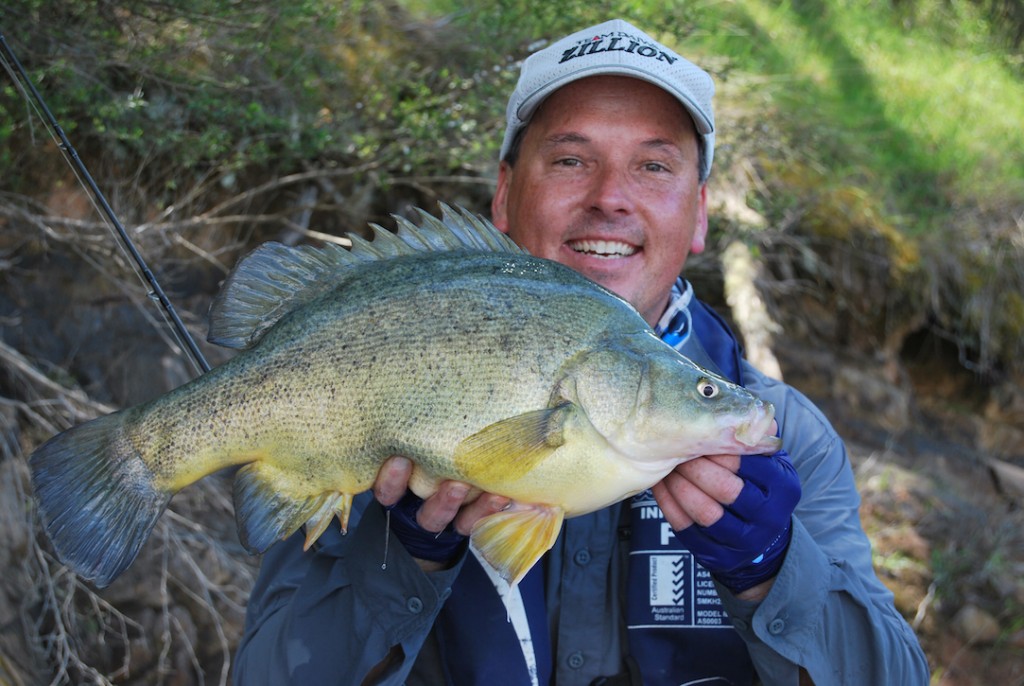 Having said that, the fish don’t know this. When temperatures are within the spawning range and some of the indicators are triggered, golden perch within the Lake Eildon system will do all they can to spawn. I have seen more than a dozen male goldens congregating and “pushing” female fish to the surface and even lifting her partly out of the water. When I saw this, the weather was building to a storm and the water was 25C on the surface; schools of fish were carrying out the same behaviour as far as I could see. Amazing to watch.

The reliability of the golden perch fishing in Lake Eildon is best gauged by fishing effort and participation by anglers. Social media has demonstrated the success of this fishery, along with the lake being chosen for some major golden perch fishing competitions, this year hosting a round of the Australian Yellowbelly Championships. Eildon has truly come of age as a top fishery.

Eildon golden perch can be encountered anywhere in the lake at any time of year, but considering the spawning temperature to be the optimum time, late spring, summer and early autumn are the prime times for targeting goldens in Eildon. As the days start to get longer and temperatures rise, the golden perch will start to feed and become more active. Beginning at the start of November, and starting in the shallower warmer areas, these fish will start to find each other and school in decent numbers. In previous years we have found fish around points and rocky ledges in mid to late-spring and targeted them with bibless lures, spinnerbaits, soft plastics and even trolling through schools with bibbed diving lures. This year has thrown up a slightly different scenario (or I have simply learnt a different technique), with many fish caught around the trees in the bays around Bonnie Doon and Delatite. 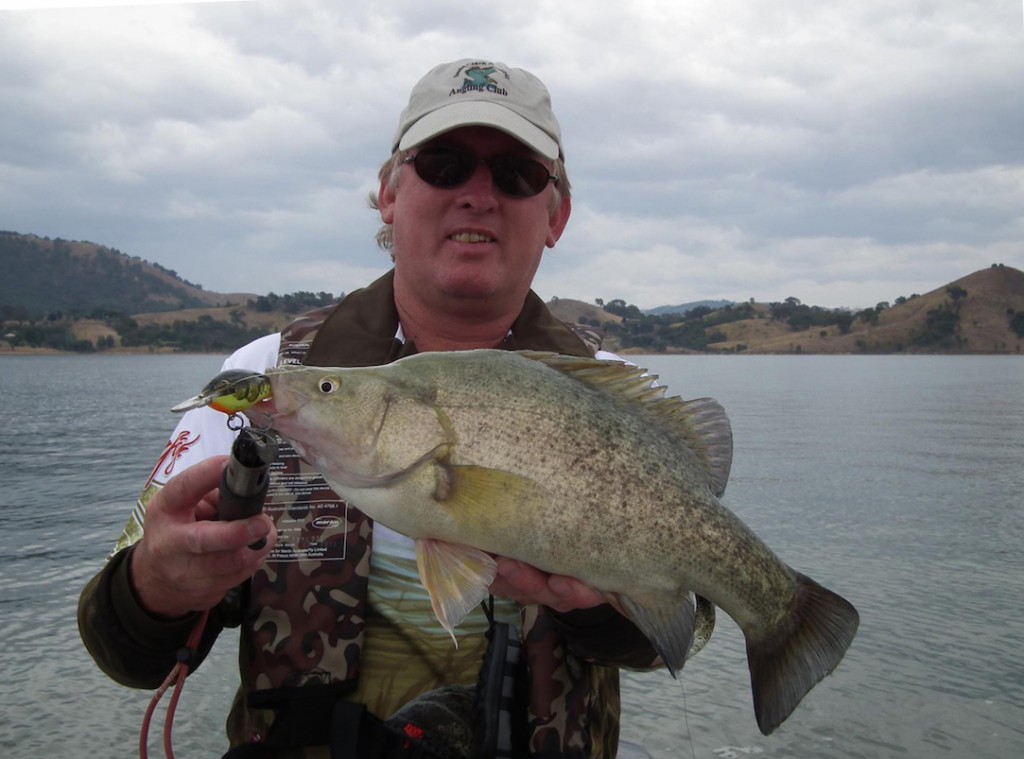 Trolling medium-sized bibbed lures in depths of 6-10 metres will have you encountering plenty of goldens at times and is a great way to “prospect” while covering plenty of ground and keeping a close eye on your sounder. When you do come across decent-sized fish schooled, mark or remember the area and concentrate fishing on those areas.

I prefer to cast and retrieve as opposed to trolling, simply for the fact of personal satisfaction and the experience of that heart-stopping smash as the fish strikes. In all honesty there are plenty of fish that will fight harder and for longer than goldens but that initial strike and first few seconds of sheer panic is hard to beat. Some fish will give a really good account of themselves while others can be fairly docile. Either way, when a lake holds plenty of fish exceeding the 15-20lb mark, they are all impressive. 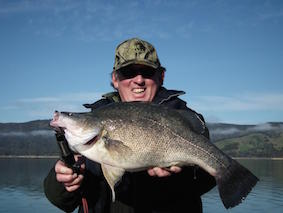 Sinking lures such as spinnerbaits, lipless crank baits or soft plastics rigged on reasonably heavy jig heads allow the angler to let the lure to drop into the strike zone more easily than trying to cast past with a bibbed lure and try to retrieve so it dives through the “zone”. Another successful method for targeting these schooled fish is to rig a drop-shot rig with one or two soft plastics, tied with a palomar knot on worm-style hooks, and work it within the school until they react.

As mentioned earlier, this year has started fishing well with a different technique than I have previously used for goldens. This method is more like the old-fashioned style of redfin fishing, concentrating your efforts around trees in bays at the appropriate depth and working bibless lures or plastics vertically until fish strike. This has been very effective, particularly with worm or paddle tail-style lures in dark colours, and I’m sure baits such as yabbies, worms or shrimp would be deadly with this method.

Some preferred lures include, but are by no means limited to:

Soft plastics: Berkley T-Tails and grubs, ZMan 2.5 & 3.5in Grubz, particularly the motor oil, gudgeon and bloodworm colours. Soft plastics that suit both casting and drop-shot techniques are the minnow-style lures including the Fish Arrow Flash-J and Lunkerhunt Bento Baits.

Rods and reels: I use low profile baitcaster outfits, however, the quality of modern day spin reels has left little advantage in using baitcaster reels other than casting accuracy.

Lines in the 12 to 15lb range will do the job depending on structure but I rarely go below 20lb braid with 20 to 30lb leader as the chances of running into a large Murray cod are highly likely and, apart from the fun of a close encounter with these great green fish, it becomes a costly exercise losing expensive lures due to lighter line. 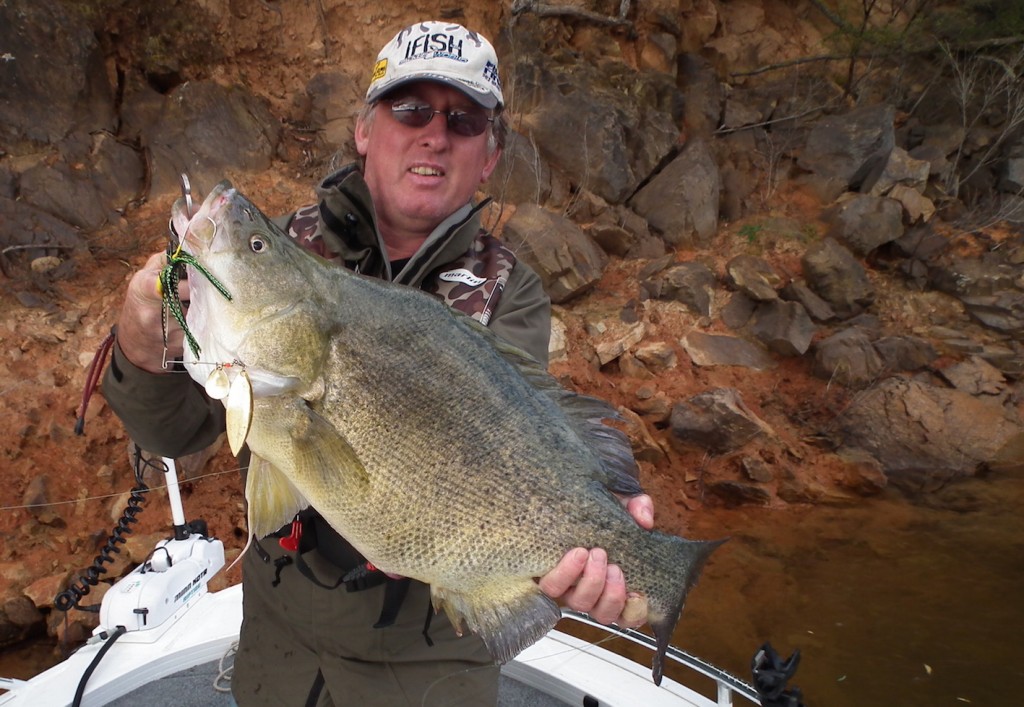 Lake Eildon has changed from a successful trout and redfin fishery to now include some top-class native fishing. This is in no small way due to some pro-active management by fisheries managers, angler support and great publicity. I believe we will continue to have a great fishery if we all look after what has been developed over a long time. With a bag limit of 10 golden perch per person and most fish encountered being over the 50cm mark, particularly by lure anglers, it might be time to rethink the catch keep limits of our inland lakes.