While Exmouth is amazing and one of Western Australia’s favourite game and sport fishing destinations; if you want to experience the same or even better fishing in a remote setting, Ningaloo Station may be the spot for you. Ningaloo station sits only 100 km south of Exmouth and is a great spot for the adventurous angler who is after a remote fishing experience where you can camp on your own piece of beach. Imagine camping just metres from the shore and launching a car topper from your site to catch a marlin; not many places in Australia can make such a claim. The greatest thing about the station is the variety of fishing on hand. This place has fishing that suits every angler! 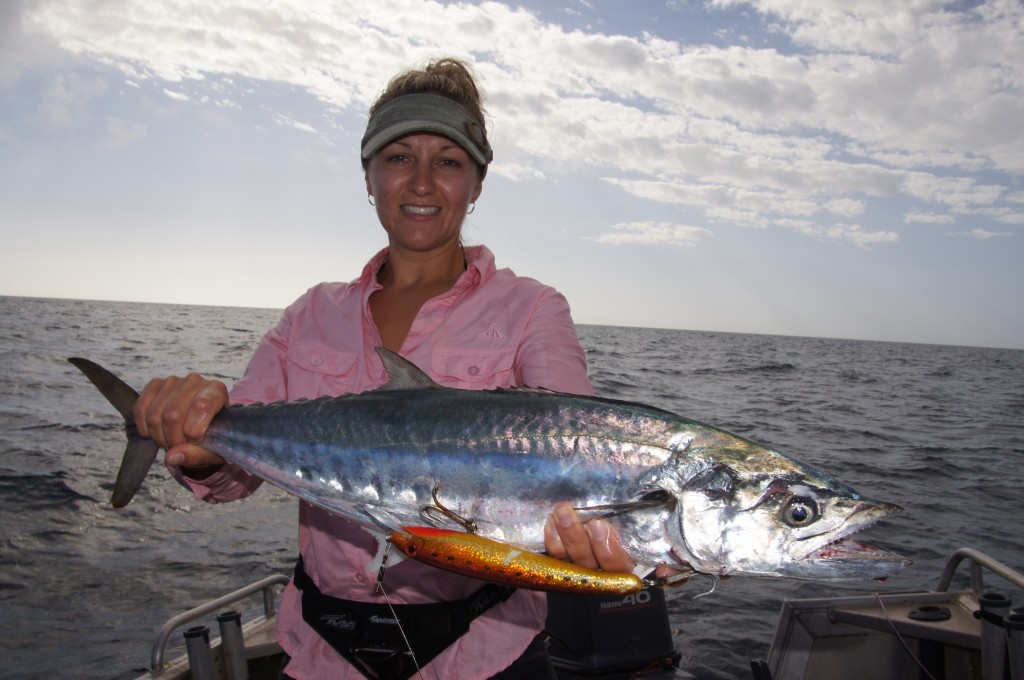 Ningaloo station is a 50,000 hectare pastoral lease in the northwest of Western Australia managed by the Lefroy family since 1934. Wilderness camping is provided and during the cooler months the remote location becomes a popular destination for serious campers. The region may be barren in parts but the beauty of its mountain range and pristine beaches make it a desert meets tropical paradise type of place. The famous Ningaloo reef extends 260km of W.As coastline and Ningaloo station is around about in the middle of it. The reef is popular because of its abundance of sea life such as whale sharks, manta rays and turtles. More importantly the abundant sea life means it has incredible fishing. Despite the many sanctuary zones much of the area offers accessible world class fishing. It’s not just the reef that makes this place special it’s also the easy access to deep water. The inshore fishing on the shore side of the reef is quite protected with exciting shallow water options. This inshore fishing can be a blast by sight fishing in around the coral bommies. Around the Ningaloo reef it is a great place to get large giant trevally or other large reef dwellers which like the swell. Once you get past the reef the ocean floor drops out fast making game fishing for billfish possible in the smallest of crafts. It doesn’t matter where you live in Australia, getting here is never easy but it’s worth the effort.

Although the station is only 100km from Exmouth as the crow flies, it is still a good two hour trip via a four wheel drive. It is an easier option to go south to Coral Bay for supplies although the place is small with not much in the way of tackle. Coral Bay is one of the nicest little spots in the country so put it on the list for a look. The station has no facilities meaning you have to bring in everything including a chemical toilet. Although you are out of the way you will feel you are in safe hands with Phil the station owner. UHF works brilliantly anywhere on the station and Phil has dealt with many emergencies on the coast and will handle any situation like a pro. 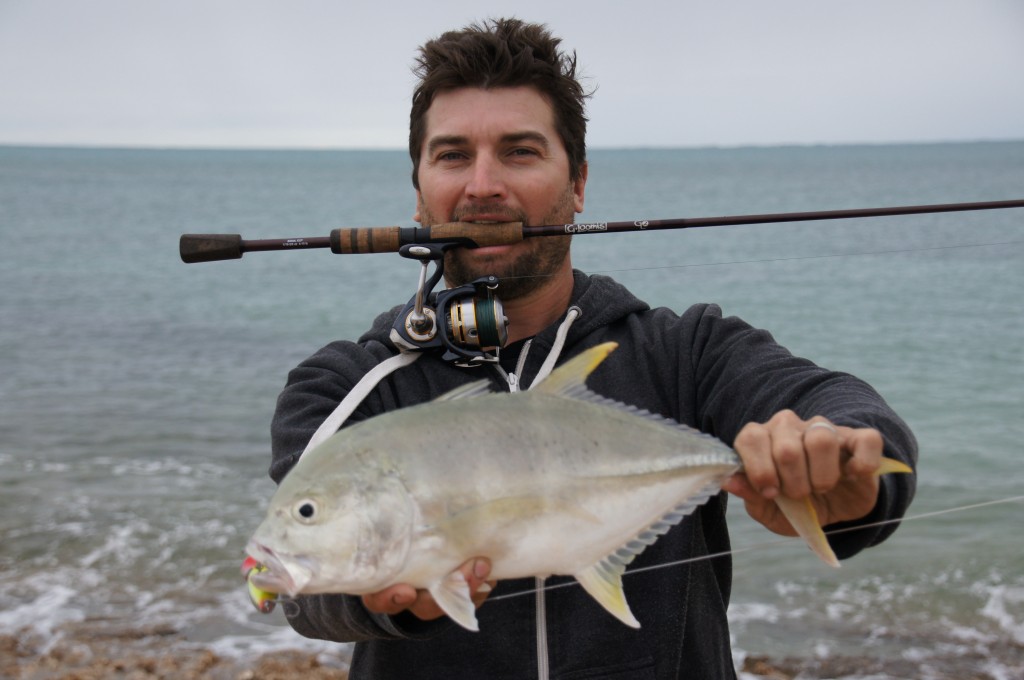 What species are available?

Ningaloo is your typical tropical location which hosts warm water species in a perfect environment so it’s not surprising a lot is on offer. Inshore you can expect queenfish, bonefish, emperor and much more. Offshore the targeted species are usually red emperor, coral trout and rankin cod and the associated by-catch is way too long to list. Pelagic species on offer sweeten the deal with big Spanish mackerel being a popular target. Yellowfin and various other tuna are also common and are often seen breaking the surface near the working birds. The deeper water on the western side of Ningaloo Reef is renowned for targeting marlin. Ningaloo station is the closest place on the Ningaloo reef to the continental shelf and one of the closest in the mainland of Australia 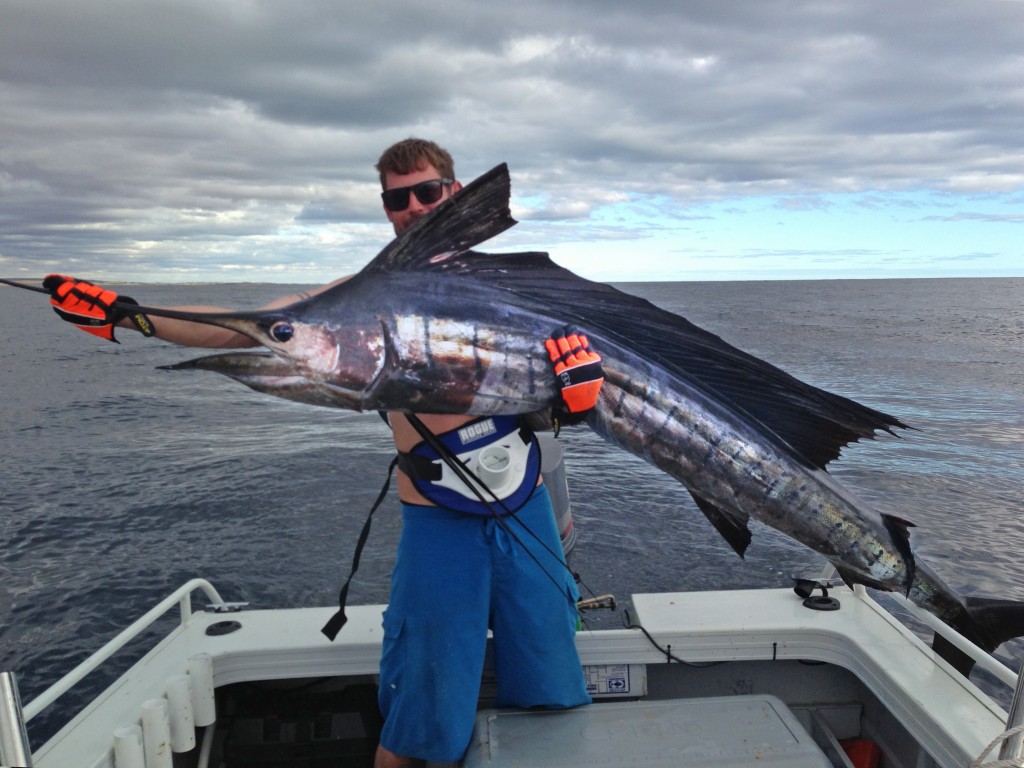 In the summertime you can expect to get the whole place to yourself. The reason is the 40 degree days and the common strong winds, not to mention it is also cyclone season. Cyclones are not common but the prevailing strong winds are enough to keep people away. The station is busy from May to August and this is a good guide for when the best weather is. Around the start of June I hold a fundraising event called the Ningaloo game fishing campout which is about the best time to be there. In winter the temperatures are a nice 26-30 degrees with cool but not overly freezing nights. The winds are normally better in winter too but like everywhere in the northwest it will still have some windy moments. If my last trip is any indication I would say half the time was perfect and the other half was windy. When you get the good weather make the most of it as this place has great rewards. Try and fish around dusk and dawn, high tide and the incoming tide.

How to get there

Most visitors to the station are either anglers making the 14 hour mission from Perth or travelers who are on their way around Australia. Ningaloo station can get busy through the winter from the grey nomads. Many retirees have made Ningaloo station a home for 6 months of the year and settle in with their large four wheel drives, big caravans and car topper tinnies. If travelling from Perth you will find a dirt road turn off 100 km before Exmouth. There is also another access from Exmouth through the national park, this way means you will have to four wheel drive across Yardie creek which at times is flooded. The ranger at the entrance to the national park will be able to inform you if the creek is easy to cross. I can recommend if you are travelling around Australia to not miss this spot on your travels. Another option for interstaters is to fly in and hire a four wheel drive and boat from Exmouth. Budget car rentals can supply you with a late model Hilux or 200 series Landcrusier and meet you at Learmouth airport at Exmouth, from there you can hire a boat or kayak from Exmouth Boat and Kayak Hire. These guys will point you in the quickest and easiest way to get to Ningaloo station which will take around 2 hours. The station does have accommodation which is probably the best option as you can’t hire camping gear from Exmouth. Wicked campers at times have four wheel drive camper vans although unfortunately they don’t have tow balls to tow a boat. They would be a good option if you would like to go for a shore based camping mission. 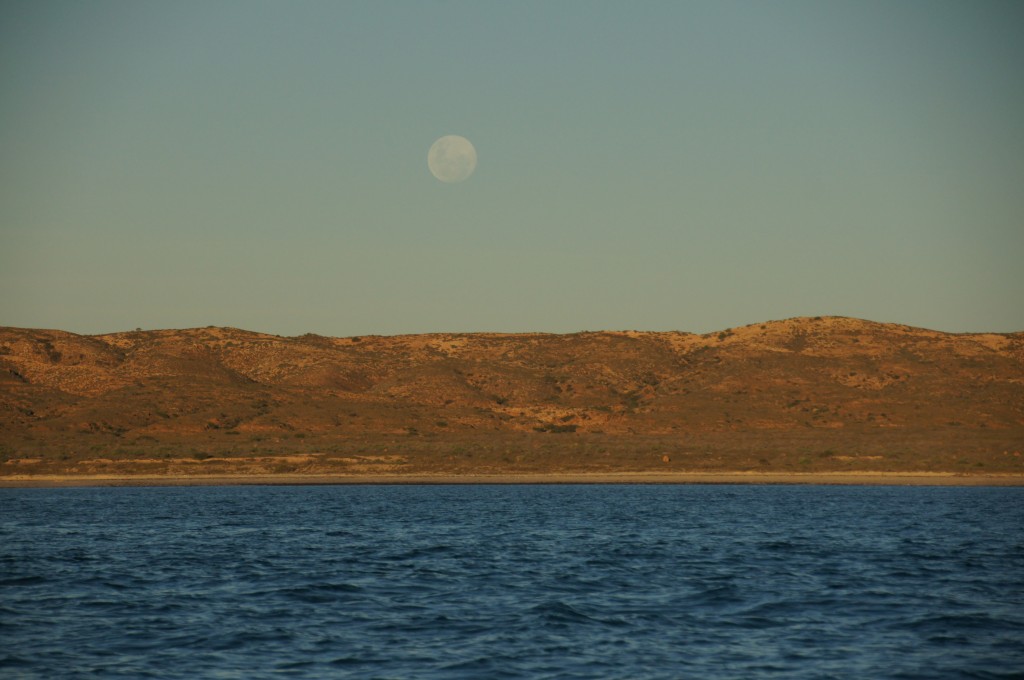 If you are out for more than just wetting a bait to catch a feed you will be excited by the sport fish available. GT popping is not as common as it should be around these parts but the crew that are in the know are catching and releasing some solid specimens. Most GTs are in the 15-25kg range although being a remote location you can expect to find some much bigger models. Using heavy popping gear is essential as these fish hang in close to the exposed reefs, they are dirty fighters and the Ningaloo reef is used as an advantage for them to bust off even the heaviest gear. Fly fishing can also be effective, shore based fly will get you amongst the queen fish and bonefish if you work the sand flats. Soft plastics get torn apart in this area either going light inshore or bouncing them off the bottom in 20-30m on the west side of the reef. My favorite is sight casting small poppers with 4-8kg spin gear. The inside of the reef offers crystal clear waters with coral bommies everywhere to cast at. The bommies are inhabited by spangled emperor, various other emperors, coral trout and cod. The sandy areas have other great sport fish such as queen fish and trevally. Big golden trevally around the 90cm mark are not uncommon which are a challenge on all lures.

Game fishing is perfect in these parts particularly if you are in a smaller boat. This place is mind blowing when it comes to catching marlin from a tinny. The launching facilities cater for smaller boats which is all you need to target tuna, wahoo and billfish. Sailfish are most common in 30-80 metres and at times can be found in large schools which feed aggressively. The best time of year for sailfish is November to December although this is a bad time to be at the station due to the common strong southwest winds. Small black marlin are common all year round and personally I have found the 100-120 metre mark the most successful. If you are after some big back breaking marlin you will be better to go to 250m plus looking for the big blue marlin. New state records are being broken lately from the big blue marlin out in the deeper troughs out wide of Ningaloo. These deep waters sound like they are a long way from shore but this is one place where you can be game fishing minutes after launching. From the boat ramp to the reef is around 1km, if you go past the reef for another km your in 30 metres, another 3km and you are in 80 metres, another 5km and you will reach 200. After the 200`s is when it drops off deeper even faster. 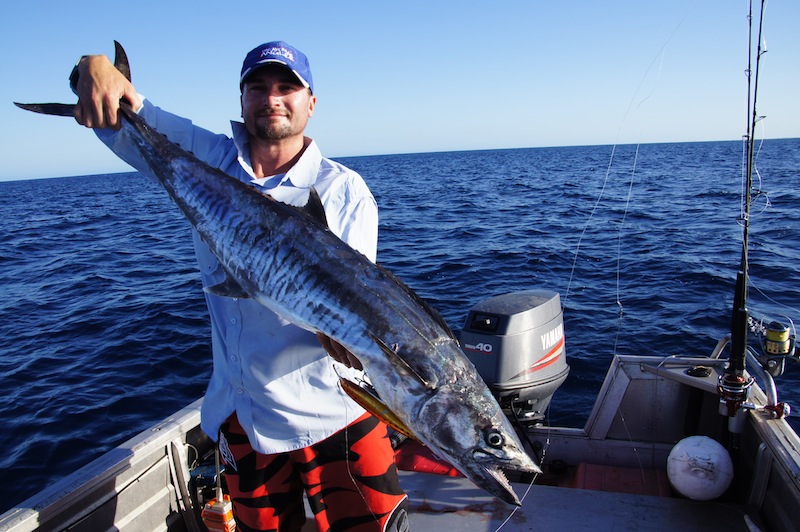 Having deep water close gives the small boat angler easy access to deep water bottom fishing. Using the sounder to find lumps in the 50-70 metre mark is one option. Finding lumps can be a hard task with large areas of flat coral bottom everywhere. This doesn’t mean there’s no fish! Doing drops around the 100 metre mark with no evidence of fish or ground still can produce a heap of quality fish. Bottom fishing is not really my thing but on days when the billfish are not cooperating I occasionally will drop down in 100 metres ignoring the barren look on my sounder. Quite often I come across a great spot teaming with red emperor, coral trout and rankin cod. It still amazes me but somehow it works!

This article only scratches the surface on a few of the stations options. I can recommend it to anyone. The best and the worst thing about the place is how remote it is, the corrugated tracks and lack of facilities. It keeps away a lot of people but rewards the anglers who make the effort.