Around every boat show season Haines Hunter releases a new model – and not many are dropped from the range. One of the latest has been the 700R, a big boat that warrants questions about its necessity in the line-up when there is already a 675 and 760. Do you really need a boat to slot in between these two sizes? 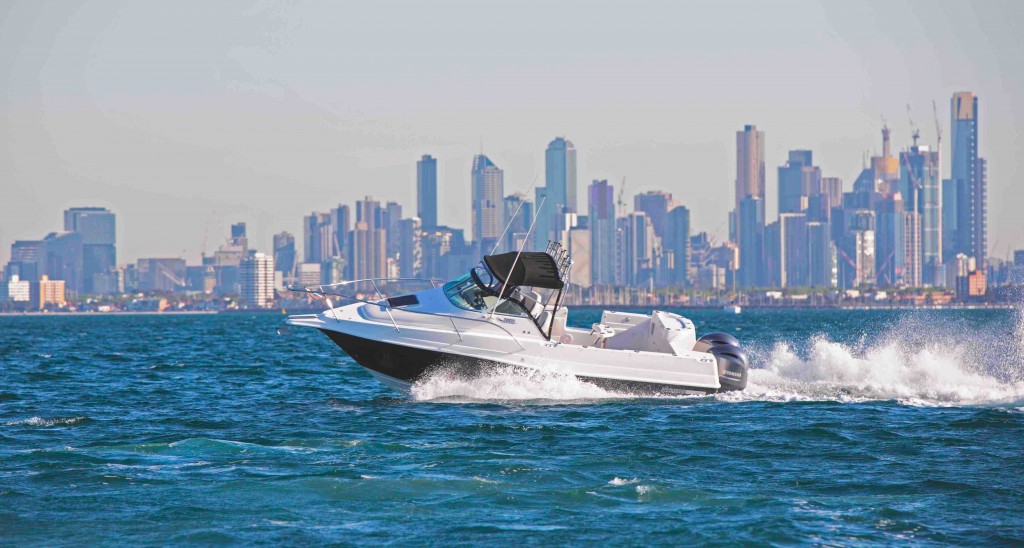 On paper, no, you don’t, but when it comes to boats length is highly deceiving and there are other factors that can make dramatic differences. The 700 is a case in point; on the day of testing I was with Lee Rayner in his 675 Hard Top, a big boat, but when Phil Perias of Port Phillip Boating Centre came into St Kilda Marine to meet us in his 700, it dwarfed the 675. Aesthetically I wasn’t a huge fan of the 700 when it was released: it’s certainly a big, impressive boat, but something didn’t quite sit right with me. After Phil arrived I realised what it was: all-white gel coat doesn’t suit this boat. Phil’s model is finished in black slab slides with a white deck and the boat looks completely different. I love white boats, but it doesn’t flatter the lines of the 700. In black, she looks the part. 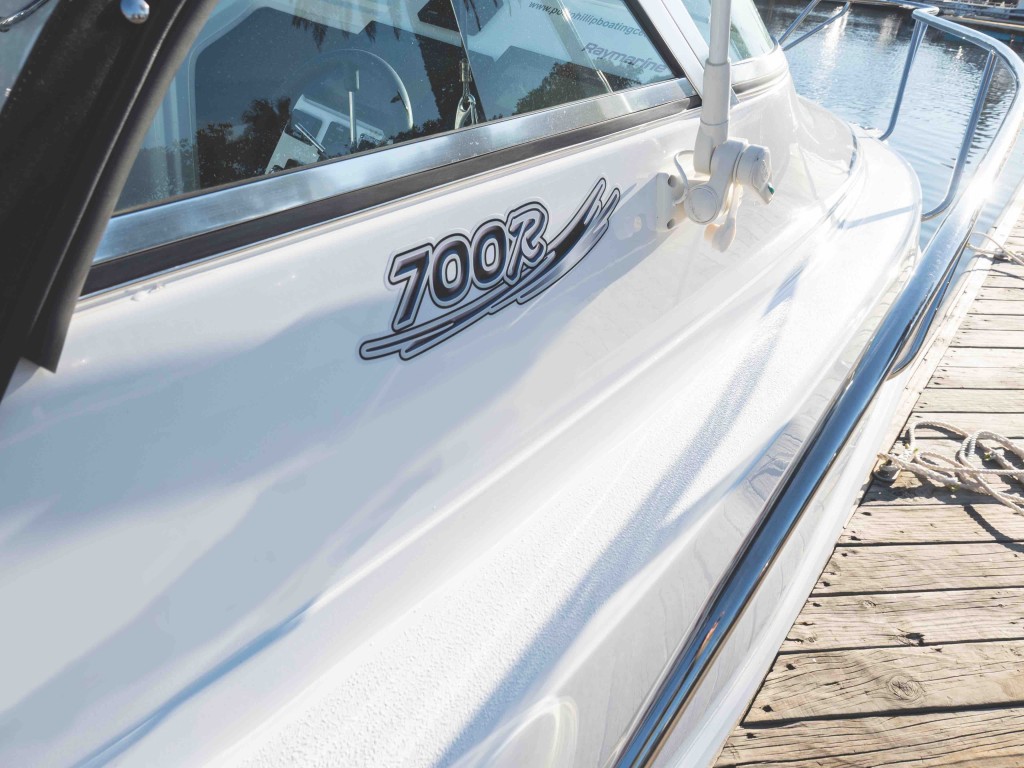 Ten years ago Haines Hunter seemed to design boats to cater to multiple demographics and they were marketed that way. However, recent years have seen the fibreglass giant happy to build a boat for a specific purpose and, in the case of the 700, it’s all about fishing.Starting up at the pointy end, you’re offered a great deck mould that allows for easy walking when getting on and off the boat from the trailer – the best mould Haines Hunter has developed, it also looks sporty and fast. 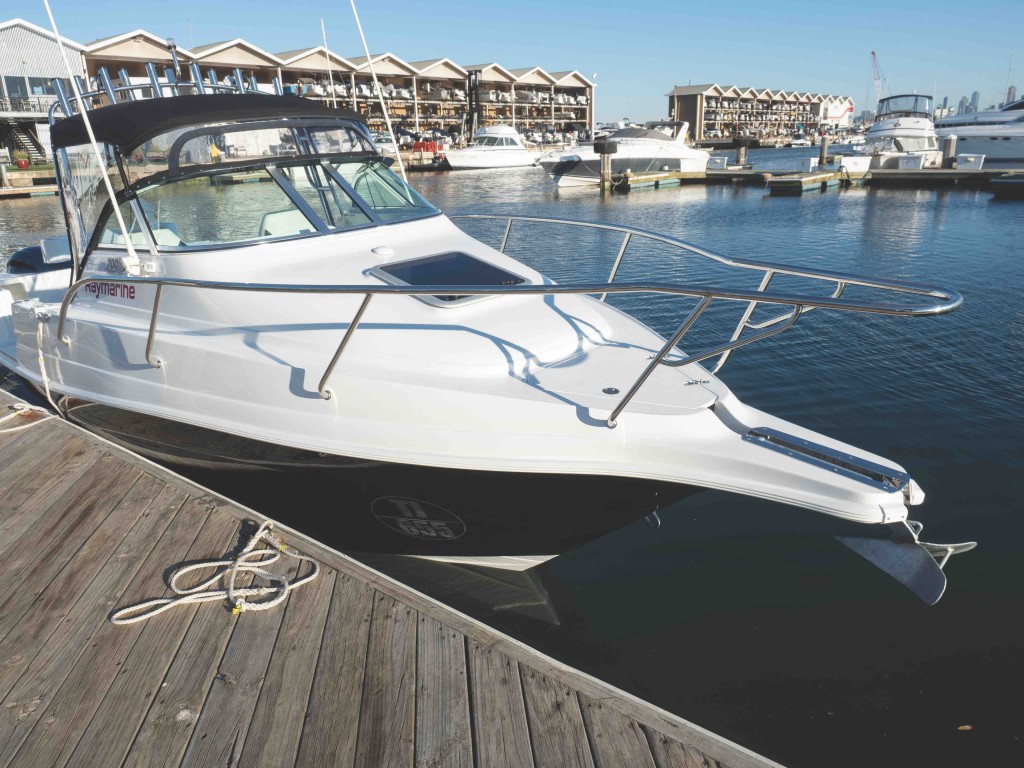 Underneath this, a spacious cabin that will easily sleep two and offers ample storage is a nice touch for overnighters or early starts on the snapper. Moving up to the helm it becomes apparent that this boat is all about modern electronics and lots of them. A huge flat and ergonomic new dash allows anglers to mount everything they can think of, with the test model sporting 12 and 16-inch Raymarine Axiom Pro units, Yamaha Digital command link, Yamaha dual push-start buttons, 2 x 6 bank rocker switch panels, Trim tab switches, 27 Mhz VHF radios and a GME stereo system. The addition of a separate mounting block for your twin binnacles is outstanding. It’s placed perfectly for comfortable driving in all conditions. Essentially, you can fit anything at this helm that you could possibly want to. 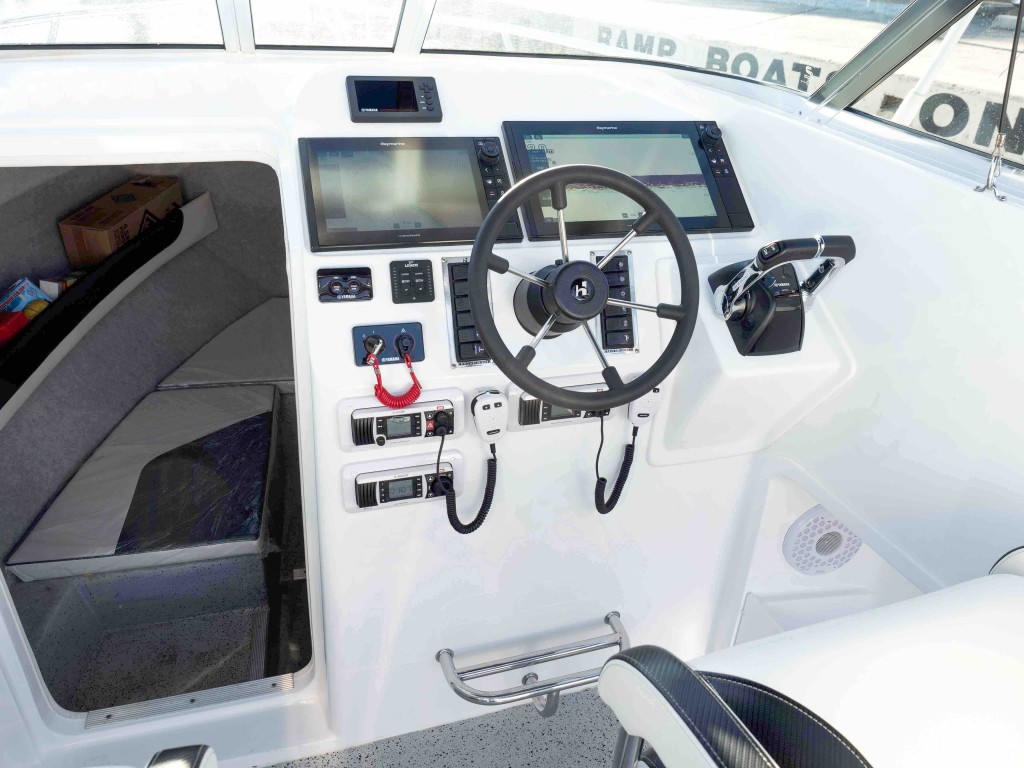 Moving back towards the cockpit is where anglers will really be impressed. The 700 offers a huge cockpit with a 2.5-metre beam that’s been very well laid-out for the offshore game fisherman. A leaning post is a great touch and with this much space it will never be in the way. Three large guys can easily fish each side without touching. Deep side pockets for storing bits and pieces are a great and useful touch and the length is there for those big and long gaffs and tag poles. 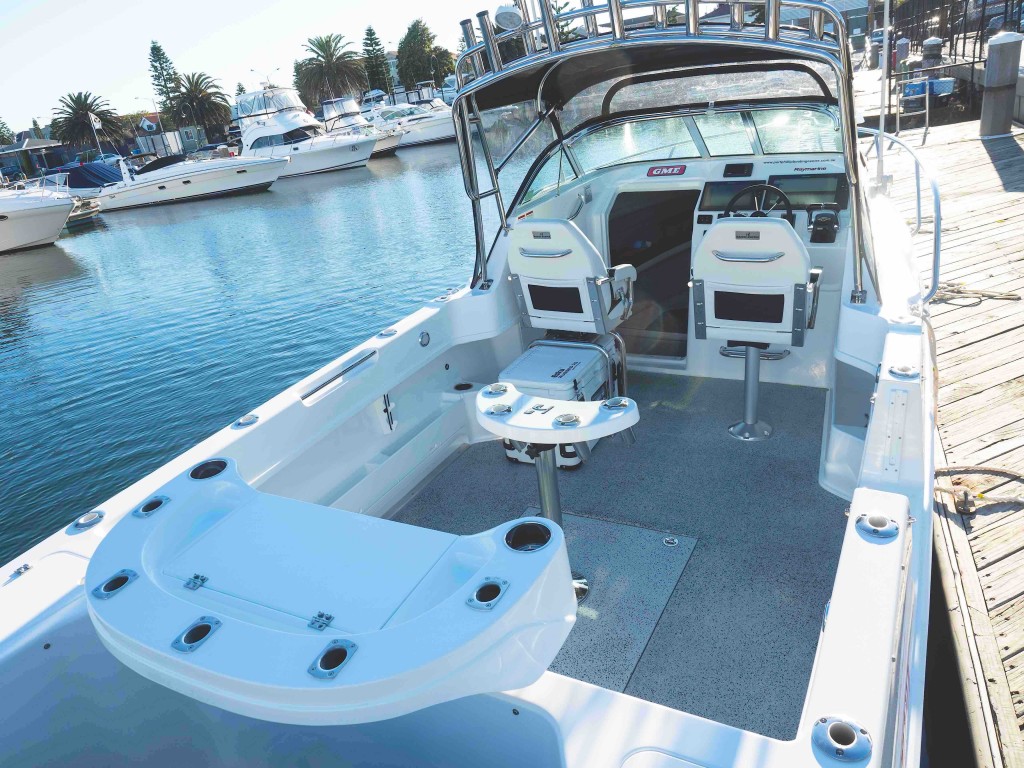 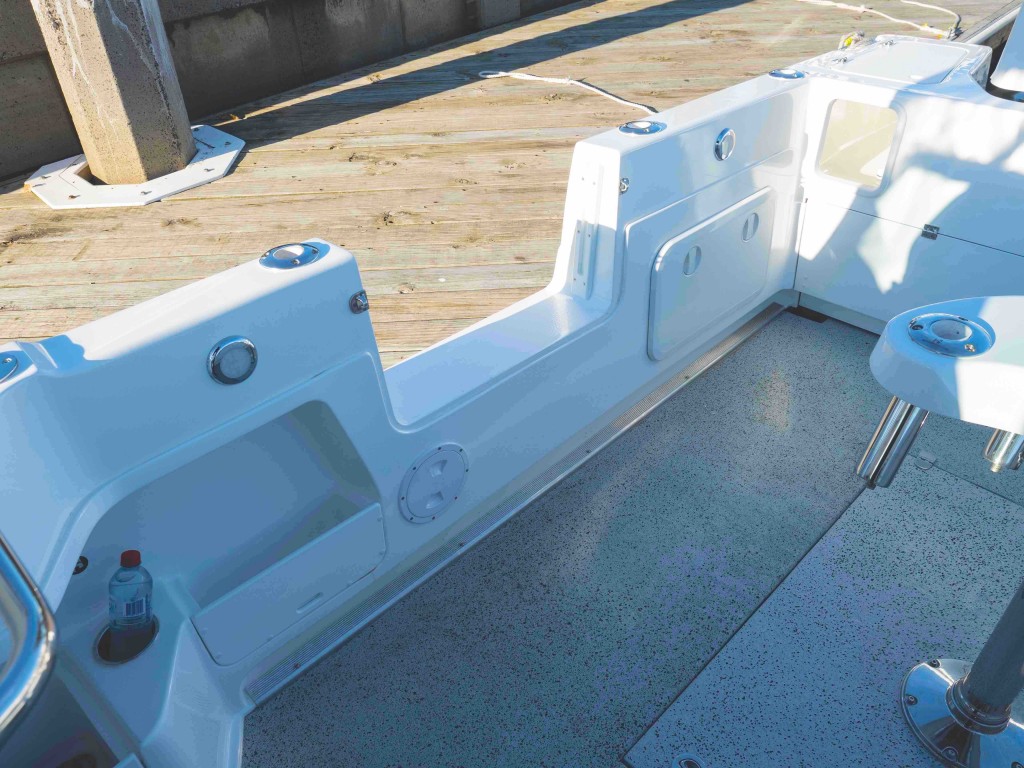 The kill tank is enormous and could accommodate a 100kg tuna if you could bend the tail enough, while the transom houses two large live wells to keep the slimies happy. The spacious engine well easily houses the twin 200hp Yamaha outboards with room left for tuna tubes. It’s a simple, efficient and effective fishing platform that doesn’t leave you wishing for anything, it just makes you want to go fishing.Ride & Handling

From the outside the 700 looks big – and inside it feels big. It sits high out of the water, feels reassuring and will be appreciated in rough offshore conditions. Underway you know you’re in a big boat; it doesn’t lose that feeling out of the showroom or away from the dock. Unfortunately, we couldn’t find a time to get it offshore but a strong northerly was brewing and showed the boat to be remarkably soft. This is true of all Haines Hunters – the company has certainly developed a formula with its hulls that provides an outstandingly soft and quiet ride. Where some boats that boast a deadrise more acute than the 21 degrees of the 700 would start to jar and vibrate in the short sharp chop, you do not feel it. 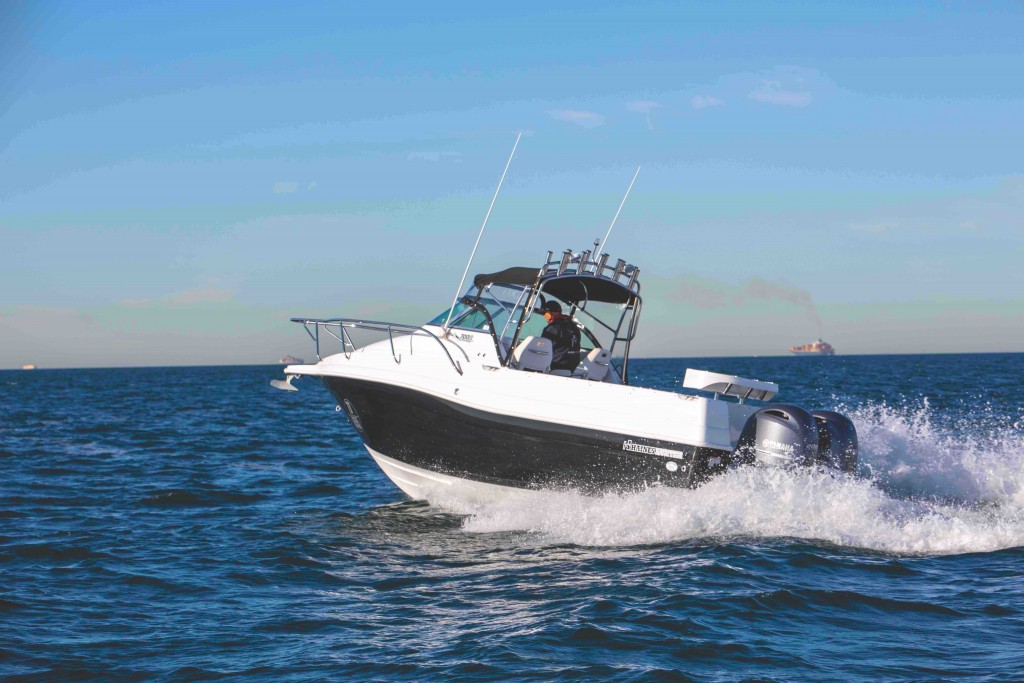 The twin 200s provided excellent hole shot that defied the boat’s size, and backing off to 3500rpm at around 25 knots without trimming up showed she is a boat that rides confidently bow high, which again is reassuring. As I increased speed I added some tab to lift the hull a little and moved through the rev range to wide open throttle at 45 knots. 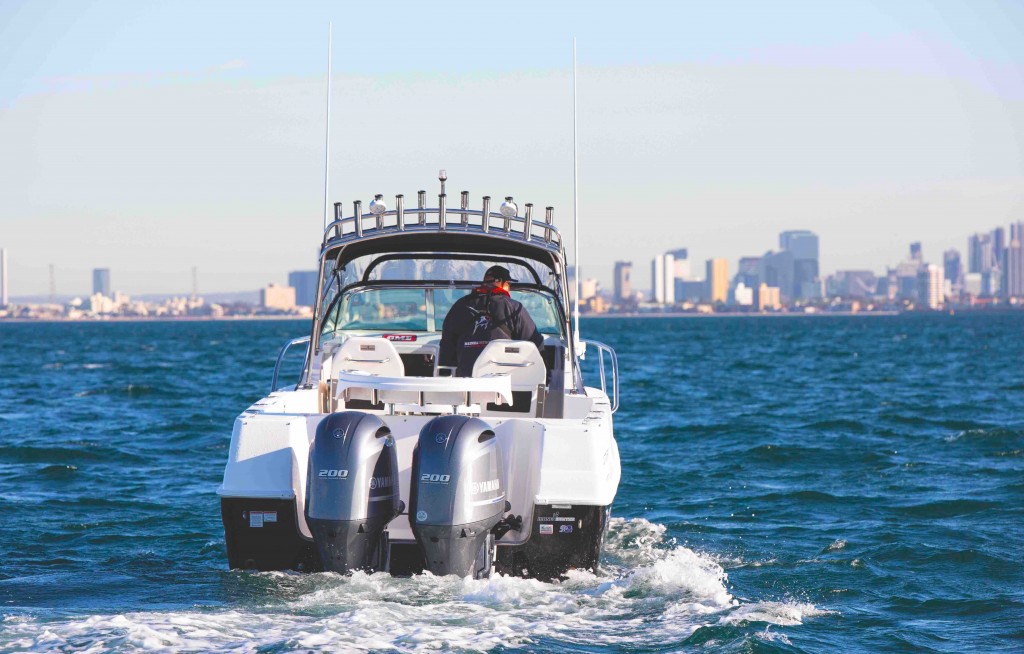 Forty-five knots is fast for any boat, but in the 700 it feels more like 30 knots. It’s extremely stable and quiet underway and loves any amount of the 400hp the twin Yamahas can throw at it. While everything about the 700 feels big it handles like a much smaller boat with sharp turns at speed showing the 700 to be highly responsive and possess handling more akin to a 585. While the chop of Port Phillip Bay wasn’t anywhere enough to put the 700 through its paces, I’ve been in enough boats to assess great handling and this boat has it. Offshore is a whole different situation, however, but Phil was able to give me some insight as he has spent quite a bit of time chasing marlin offshore. He explained that she rides in a similar fashion in a big sea, riding bow high with a soft dry ride going into it, and very dry and stable going with it. 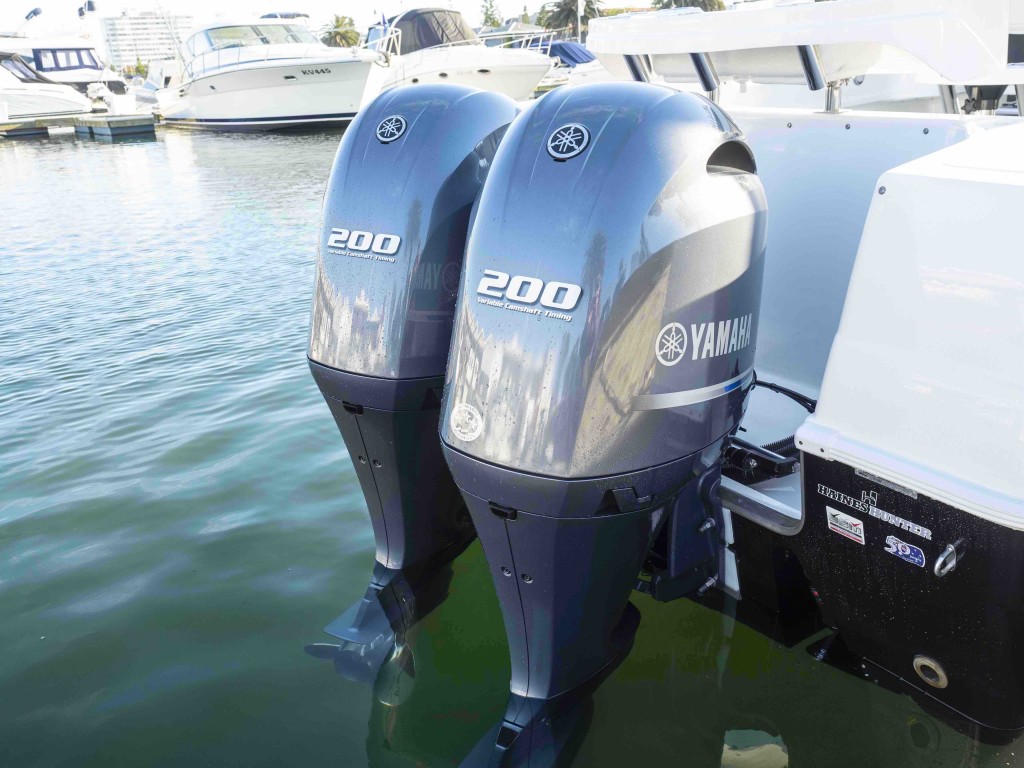 Some readers are under the impression that a boat review is about the magazine selling you a boat. In Hooked Up’s case it isn’t; the review is to inspire you to go and see the boat for yourself, take it for a run and decide for yourself. Do your research and try to compare apples with apples – I happen to think this is a special apple. In fact in my opinion it’s the best Haines Hunter in the range and I’ve been in all of them. If you’re in the market for a boat of this size I highly recommend checking out the 700R. It’s a great example of a modern trailable game boat that ticks a lot of boxes. 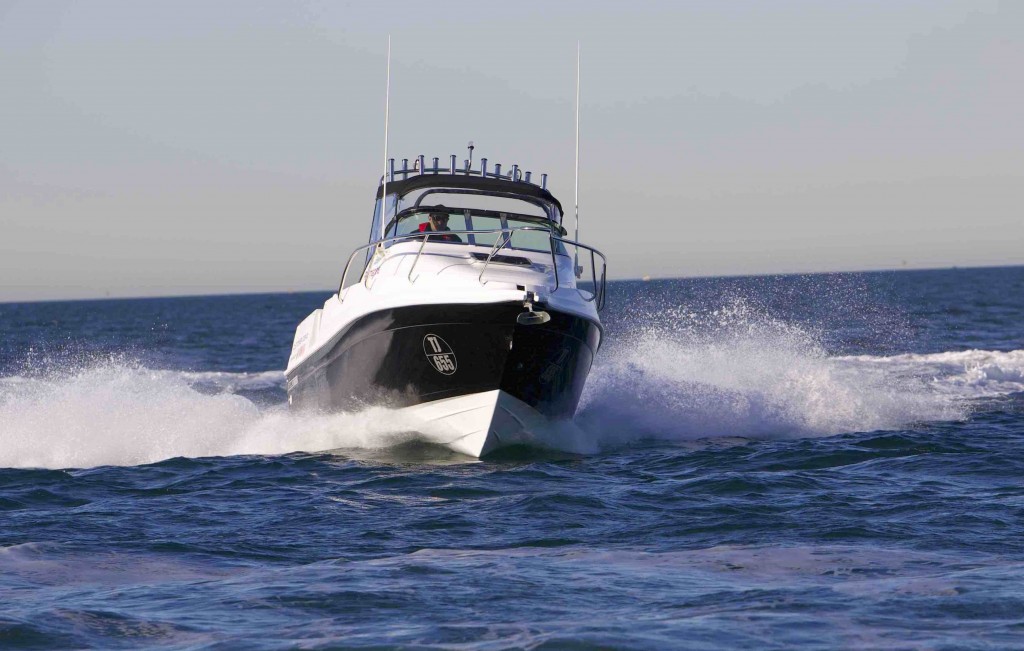