Unless you’ve been living under a rock, you would have heard of the new Southern Formula, or seen the images that have been doing the rounds. A boat that is instantly a head-turner with its dramatically flared bow, colossal sides and a deck adorned by a wavebreaker that screams vintage Haines Hunter. Hooked Up first released images of the plug almost a year ago now and a few images recently started to surface of the finished product. Hooked Up, however, was fortunate enough to take it out on its maiden voyage into some water that was worthy of a boat of this ilk. 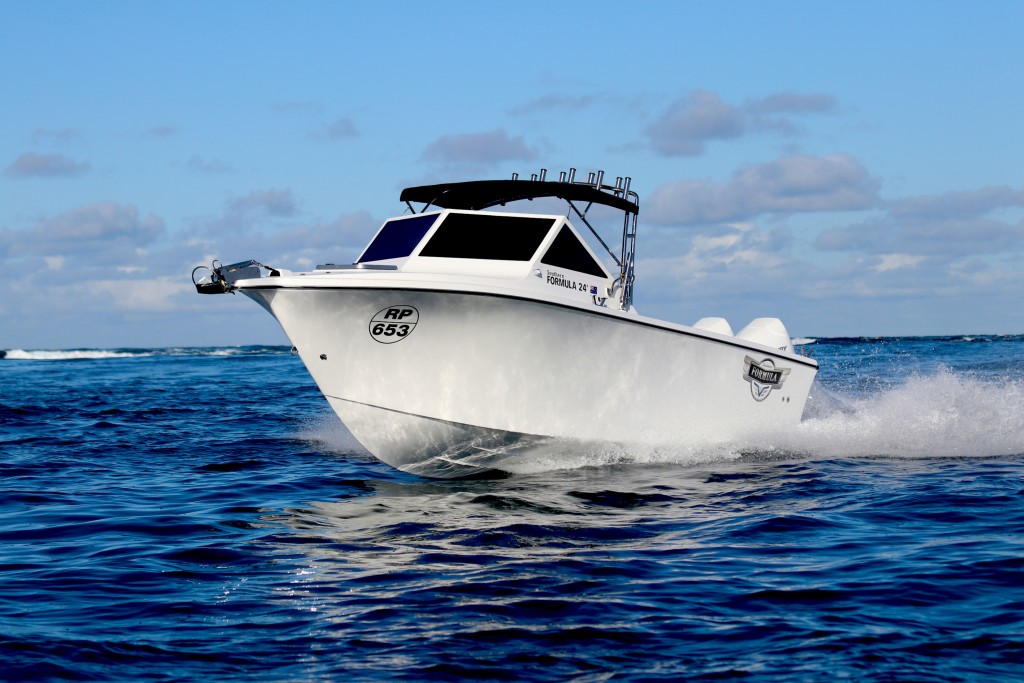 Since it first adorned the various groups and pages of social media, questions and speculation have abounded. Southern Formula is the brainchild of John Haber, owner of Haines Hunter boats, and the old-school design, and name throwback to the Haines Hunter Formula 233, certainly had people talking and wondering if this boat was a flop of the old 233 or a new design altogether. Turns out that this boat is nothing like a 233 and is its very own beast. Anyone familiar with old Haines Hunter models could instantly recognise this boat was markedly different. While the deck and wavebreaker might have some 80s flair, nothing else about it has the design characteristics of an old Haines Hunter Formula.

The sides, bow and all-over lines of the Southern Formula are an original design. Doing something original while keeping that old-school look wouldn’t have been an easy feat, and making it look great at the same time is even harder. On and off the water, it’s an impressive-looking vessel. It’s tough, sleek and has huge presence. 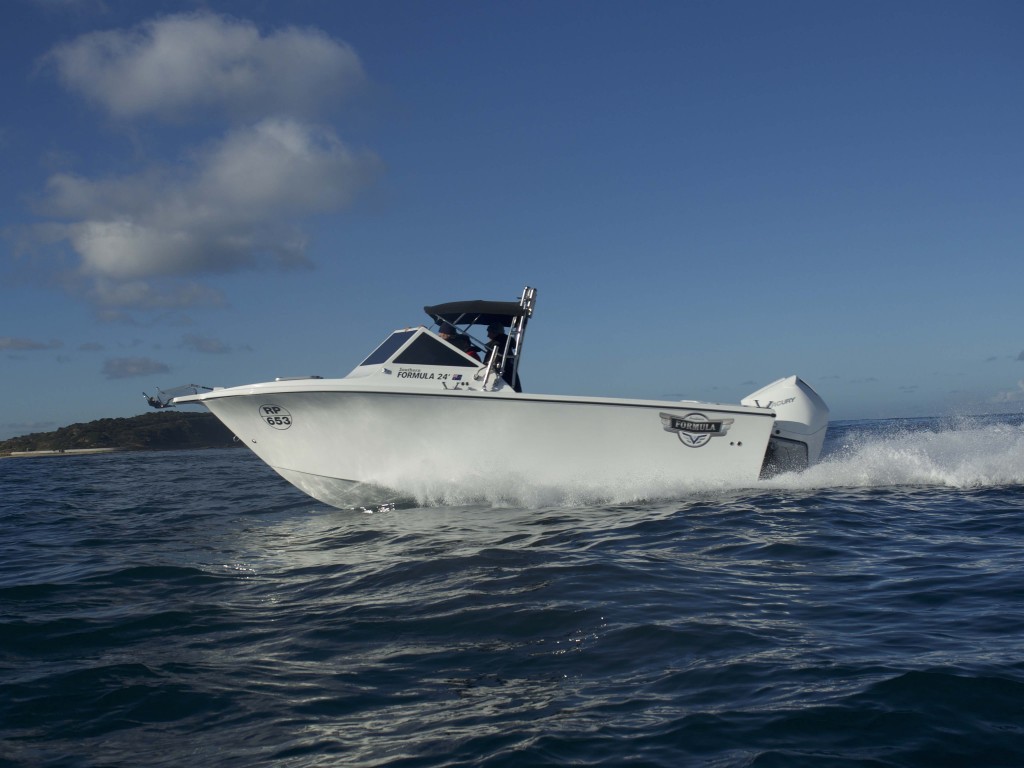 Why make a new brand?

First and foremost, there’s a definite market for it. Fishermen love that old-school look. It evokes memories of a simpler time when holidays were spent at Bermagui chasing yellowfin and marlin and anglers knew each other by boat name better than they did first name. It’s in vogue at the moment and the desire for this style of boat may not wane soon – or ever. Restoring old boats is extremely popular and more often than not, people are getting it wrong doing it themselves, or a so-called professional is getting it wrong for them at exorbitant costs. So, the Southern Formula provides a vintage look with a lay-out that suits modern anglers. 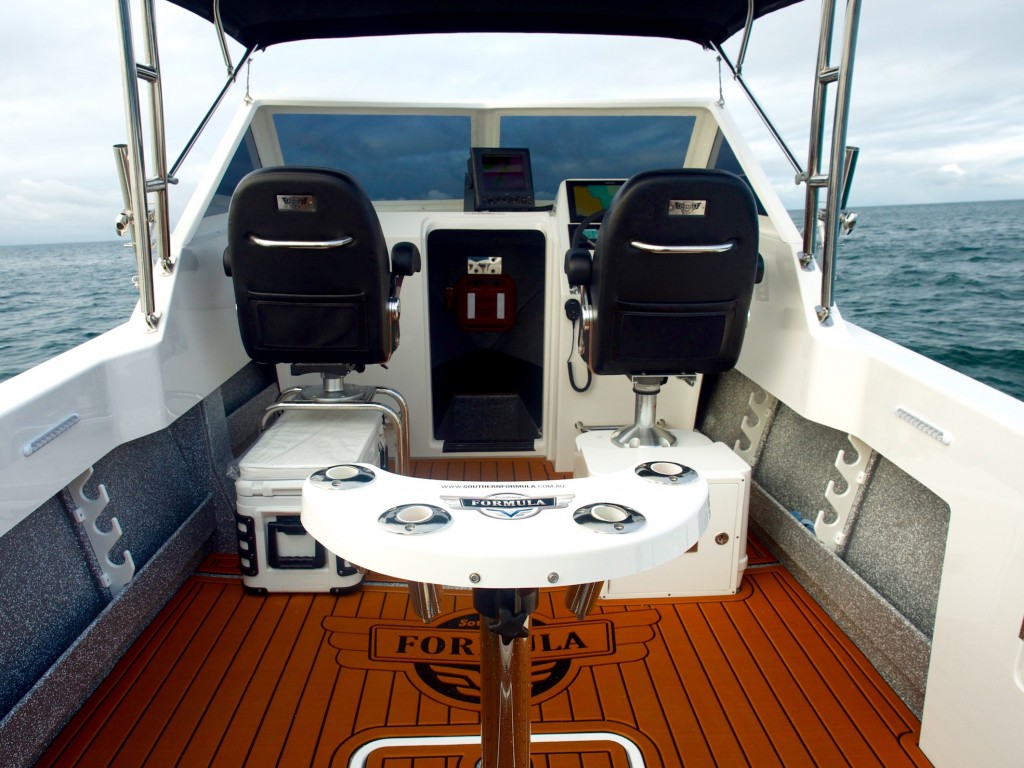 The other reason is customisation. As much as dealers want to package up a boat and sell it like it’s a car, many anglers don’t want that. It works well for general boating, but fishermen want to customise the boats themselves. Different trailers, stainless, engines, electronics, flooring – you name it. Southern Formula is sold as a bare-bones package with DIY an appealing factor, so not only does it allow for customisation, it also helps with cash flow. You can buy the deck and hull and spend the next few years adding the other bits as it suits your budget.

They certainly got the interior right. It offers a huge cockpit with a lot of fishing space. The model we tested was fitted with a lean post and it still felt huge. A massive 440-litre kill tank will be used by anyone who buys a 24 and the gas struts are a nice touch. A hinged swinging dive door, placed perfectly on the starboard side, comes as standard and is a superior design to the lift-out version. The stern offers large twin live-wells and battery shelves that can house four large batteries, which are covered by two quality fibreglass doors – a smart and convenient design that keeps your batteries dry and accessible. Twin hatches on the floor line provide access to the bilge and an additional two hatches on both port and starboard sides lead to mounting blocks for any other electronics you want to mount and have hidden away. The whole cockpit is very thoughtful and everything is designed to be hidden and dry, giving the interior a clean and functional feel. 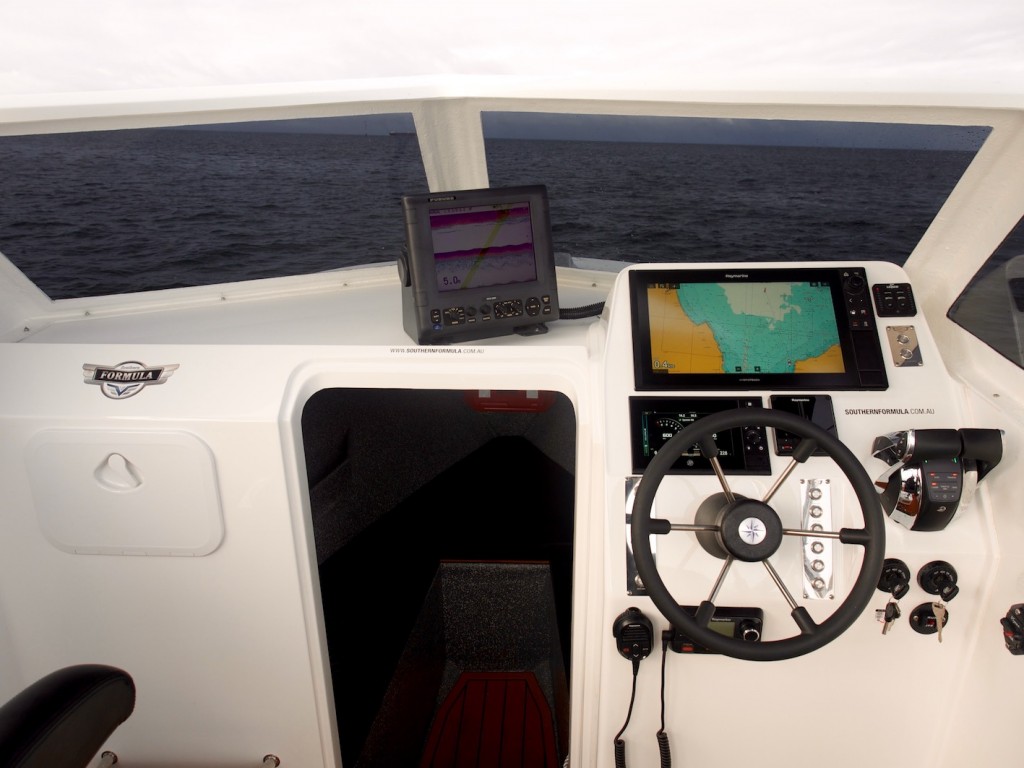 At the helm a large flat dash stretches from port to starboard, allowing room for bracket-mounting large sounders and providing an ideal place to store items or lay-out tackle. A large, square-angled dash is provided for the skipper and can house a multitude of flush-mounted monitors, throttles, radios and switches. If you’re the kind of fisherman who wants everything from 16in screens to radar, you have somewhere to mount it. The cabin size defies the low sporty deck. There is great headroom, a large V-Berth and great shelving with a dedicated shelf for the very popular pie warmer. Again, intelligently placed hatches have been designed to keep all the wiring dry and out of harm’s way, yet accessible.

If you haven’t seen the video we filmed of the boat running, head to the Hooked Up Facebook page and check it out. We went down to Port Phillip Heads and spent some time getting to know the boat. Fitted with two of Mercury’s new V8 250hp Verado outboards, my initial impression of the boat was that it’s ridiculously fast. In the calm I had the boat pushing past 100km/h and it did so with ease. It gets on the plane in lightning-quick time without much effort from the V8s. While they are very powerful engines, the boat’s ability to plane is testament to the 21-degree variable deadrise hull. 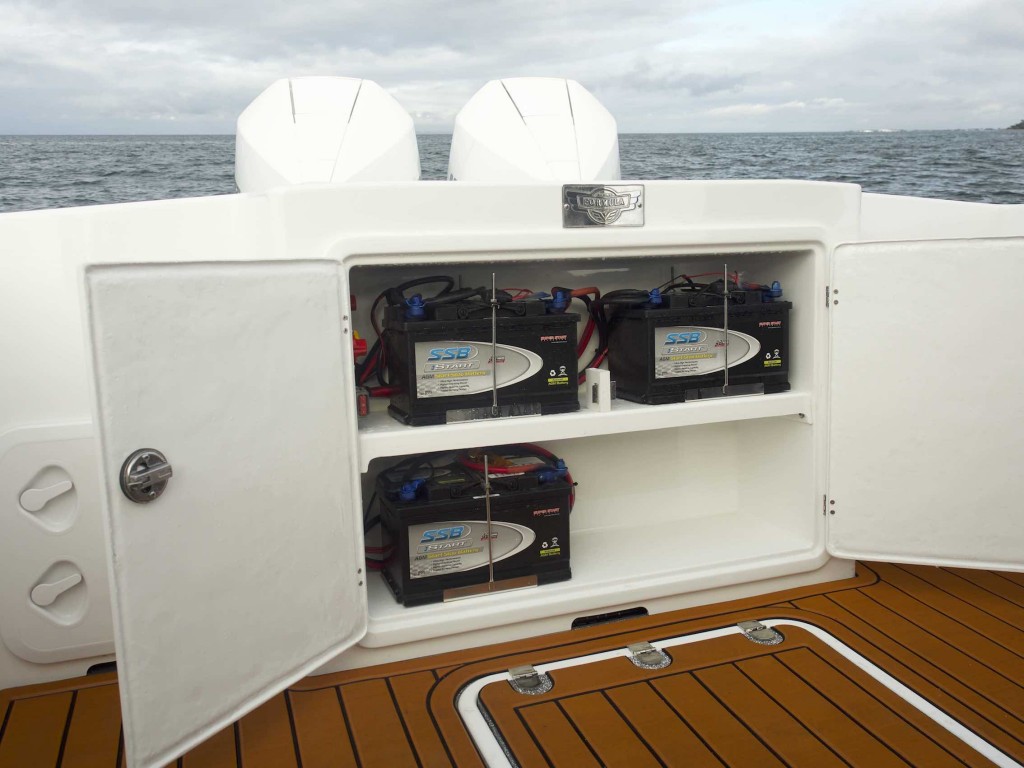 After having a lot fun driving at high speed and learning that the boat has exceptional handling that was more akin to a single-engine six metre, I tested its performance at slower speeds. I was instinctively waiting to have to engage the trim and the tabs to bring the nose down and get the ass up, but a bit of engine trim is all she needs. While I expected it would love the higher speeds, I was very pleased with its performance at trolling and cruising speeds. In the calm waters of the inner sections of the heads the boat was faultless, super-soft, quiet and dry.

As the tide started to suck out and the wind picked up a little, The Rip started to do its thing – erratic washing machine-style waves standing up in sections well past a metre and coming from various angles. As we headed out through the swell at around 30 knots, the boat was getting a bit of air and landing softly, balanced and dry. A little more speed and quite a few waves that were standing straighter and the 24 continued to confidently punch through without issue. We did multiple runs in and out of the The Rip, through the slop and swell, and the boat wasn’t phased by anything that came its way. It’s a very reassuring ride going into it and absolutely loved going with it. It offers a very soft and extremely stable and dry ride across the whole rev range. While these might not have been the roughest conditions a keen game fishermen might find himself in, it was enough to reassure me this is an excellent hull and a very well laid-out boat that offers a blank canvas for you to customise into your dream rig. 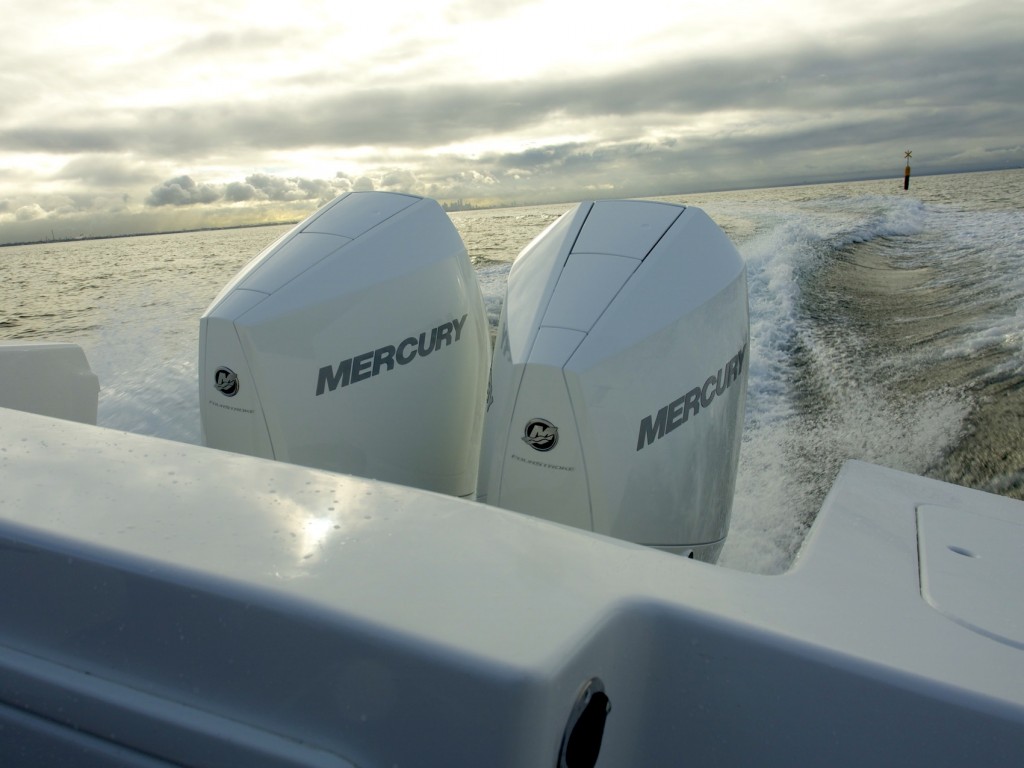