It doesn’t seem that long ago that Humminbird introduced its all-new Onix series of sounders. It was a big step forward for Humminbird as it totally revamped everything in these new units. Humminbird isn’t a marine electronics company that releases a new model every 12 months; when it does make something new, it does it right so major revamps won’t be needed for some time. The Onix series (reviewed in the Hooked Up January issue) is an amazing unit but it comes with a large – although warranted – price tag. To fill a gap in the Humminbird line-up it has released the Helix series, which is a more affordable unit that is still packed with some amazing features, and I recently had it to test for the day. 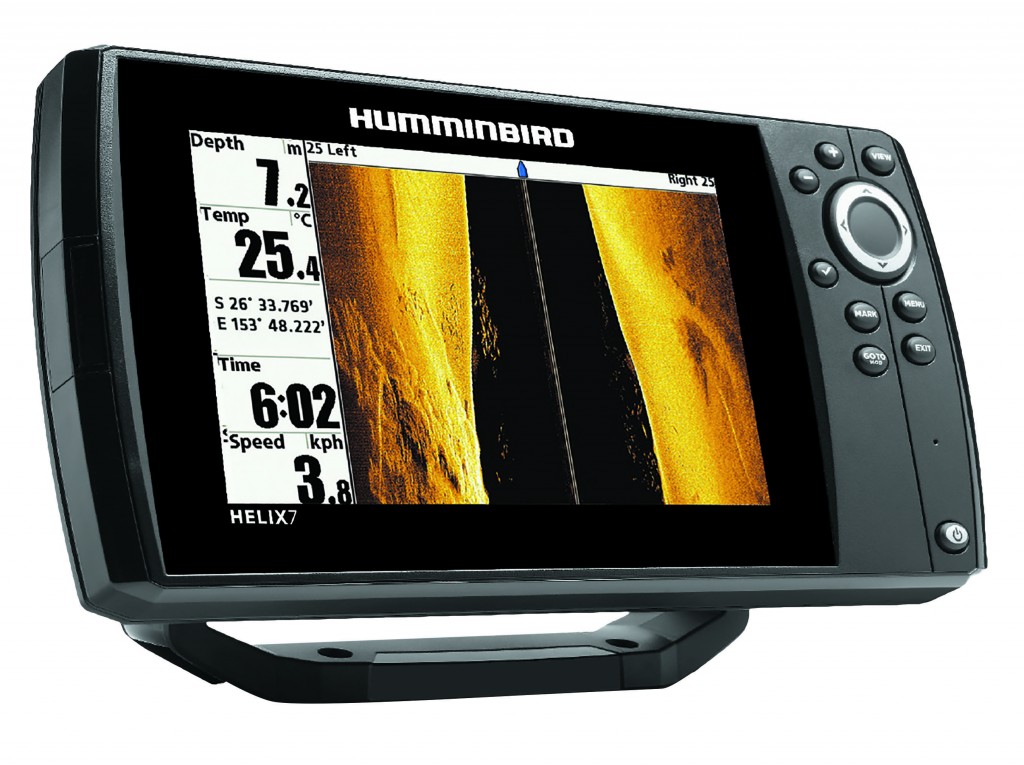 To keep the cost low, Humminbird has developed seven versions of the Helix 7 at varying price points. It’s too confusing to spell out the differences so I have listed them for the sake of simplicity. DI stands for down imaging and SI stands for side imaging; prices listed are the suggested retail price. Importantly, all models have dual-beam sonar.

Confused? Don’t be, although I am sure you’re wondering why Humminbird offers so many versions of the same model. One reason is to cater to different budgets and needs. There may be anglers out there who have no interest in certain more advanced features, so it’s great Humminbird has a cheap and simple option. Another reason is for more advanced anglers who want dual units. While the 7in widescreen is spacious enough to use the dual screen mode and easily see your readings, two separate 7in units is pretty awesome and offers better viewing than one 7in screen or even a 10in. 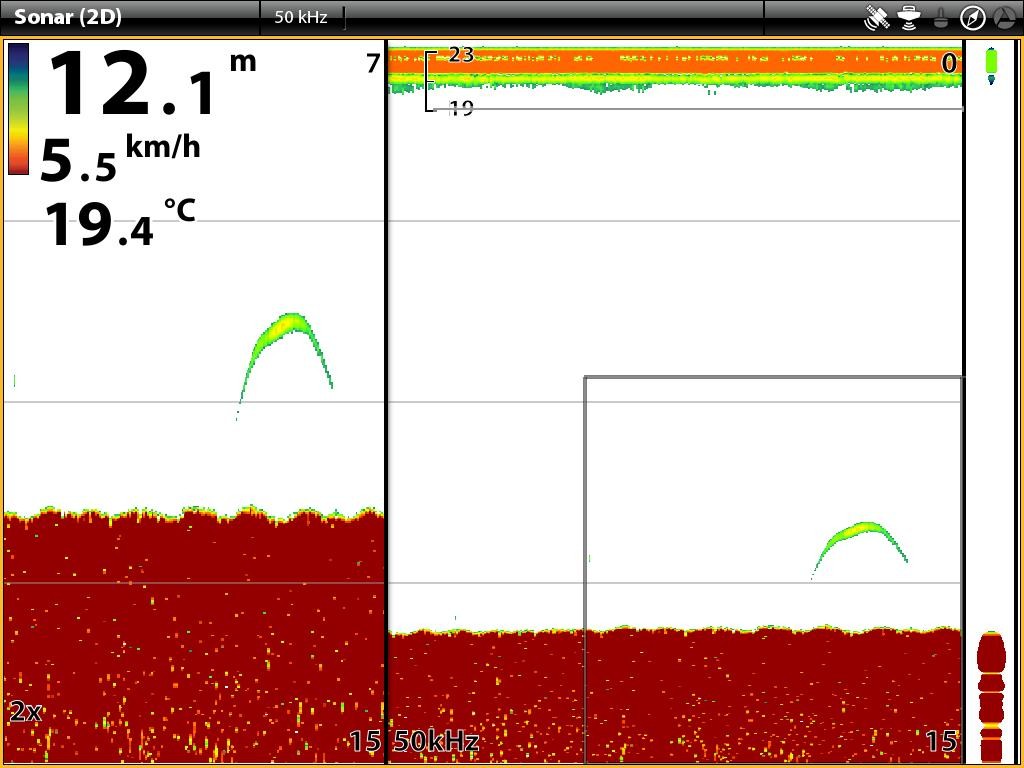 If you did want to be looking at 7 inches of sonar or DI and another 7 inches of GPS, you can do it for well under 2k. That’s pretty cool. While I didn’t get to test two units together, Humminbird technician and product manager Sean Clancy assured me these units network together very well. I know that Australian pro bass angler Carl Jocumsen has been running dual 12in screens and he is loving it.

So if you just want a sonar and GPS you can save a few bucks, or maybe you just want down imagining and you can do without the side imaging. Whichever way you want to go, it’s nice that the option is there to save money on things you don’t need – or spend money to run multiple units if that suits.

(Note: we were testing the Helix 7 DI, so the features we had to work with and review were sonar, down imaging and GPS.) 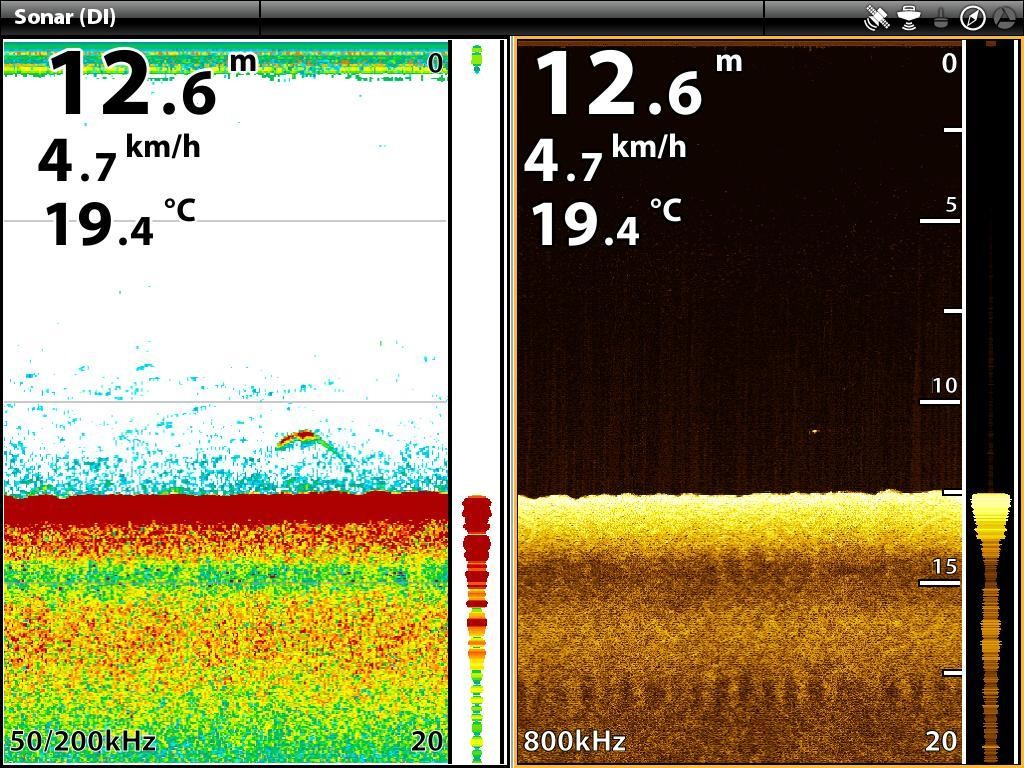 Image: A great example of how standard 2D sonar and Down Imaging differ in their reading of a fish.

The Helix screen is very bright and clear. While the resolution isn’t as good as the more expensive Onix series, the actual screen is clearer and far easier to see in direct sunlight, which is probably due to the fact the Onix is a touchscreen and the Helix isn’t. As you can see from the photo, it’s a very clear and bright screen. We never take images of screens in Hooked Up, as they always look pretty dodgy, so we generally just screen-shot, but this screen is so clear it comes up great in a photo. These are excellent units for any open vessel where direct sunlight is an issue. 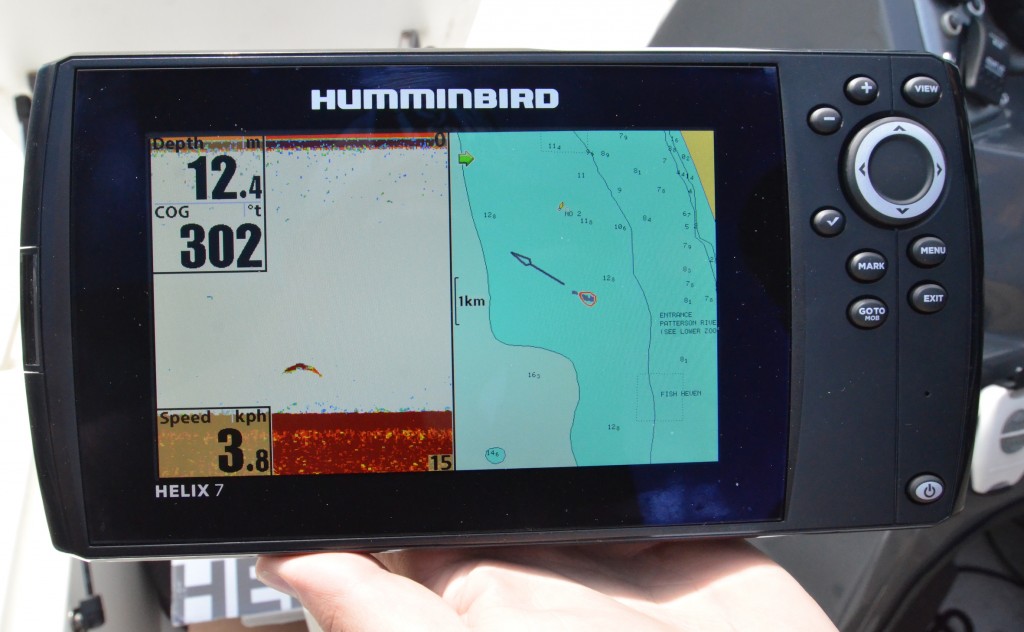 Image: A Port Phillip Bay Snapper sounded in 12 metres cruising off the bottom.

PROCESSING AND EASE OF USE

No one can complain about the speed of these units. They turn on very quickly and switching between screens and modes is very fast without any lag at all. The processor is fast, powerful and provides an enjoyable experience while navigating through your menus.

Continuing with the developments of the Onix, navigating your unit is simple and easy. It’s a great button layout that offers a simple four-way cursor and dedicated buttons for View, Mark, Go To, Menu and Exit. You also have the handy plus and minus buttons for things like zoom and sensitivity. All the main functions you need on a day’s fishing are literally at the touch of a button. There is no need to navigate menus to achieve the simple and most common tasks; it’s a very easy unit to use.

One of the best features of the Helix is the quick-release gimbal mount. There is no fiddling around with wires when you’re taking the unit in and out of the boat, it just pops in and out and tilts to your desired angle. 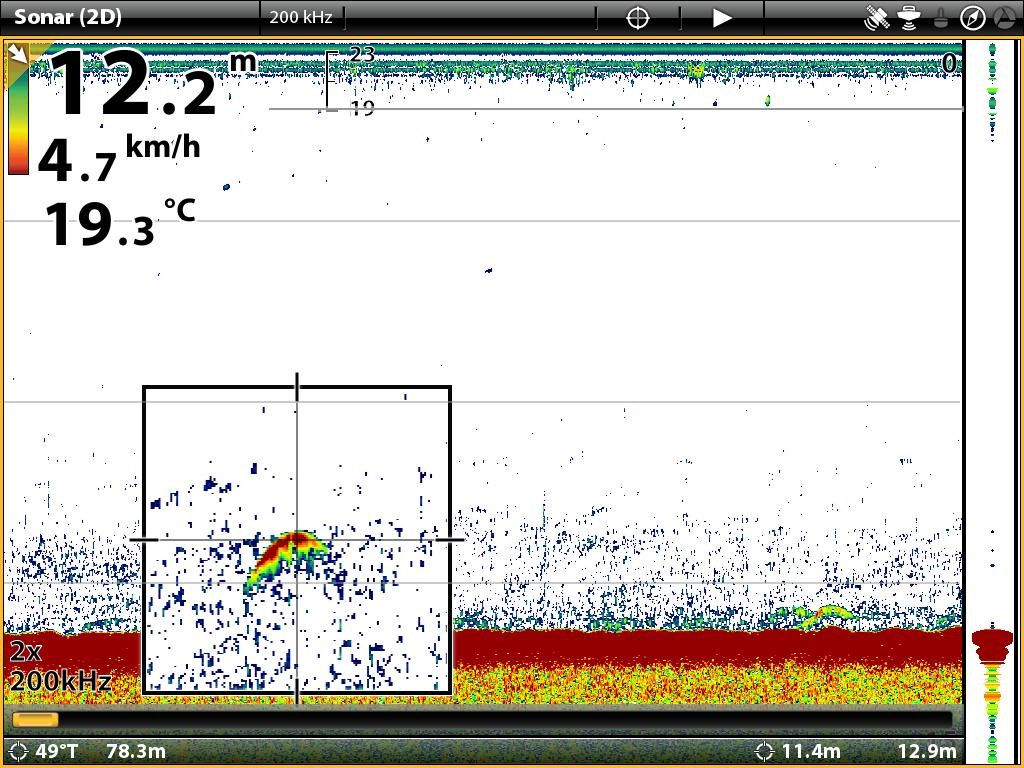 On the day of testing we were on the tail-end of Melbourne’s snapper season and I had just had a good early morning session on them in Port Phillip Bay. I assumed the fish would still be in the general area later that afternoon when Sean Clancy came to pick me up for the test. The unit wasn’t fixed to the boat, which meant that we were using a transducer on a suction cap and I was just holding the unit in my hand. As soon as we stopped at my snapper mark we marked a solid fish that was undeniably a snapper sitting on the sandy grounds in 12 metres of water off Chelsea. As you can see in the images and screenshots the Helix provides a very clear reading. We found multiple fish and viewed them in down imaging, 50khz, 200khz and dual beam modes. We also used the zoom function, which offered a very clear image. The only problem was that we didn’t have any rods, shame on us.

If you’re looking for a high-quality and easy-to-use unit and you don’t want to spend a fortune the Helix series is very hard to look past. There is also a 5, 9, 10 and 12in series in the range and various models within each size. These units are well thought-out, easy to use and a great price for the features on offer. It’s worth repeating that they come with an outstanding screen. The only downfall with the Helix series, and this is subjective, is that Humminbird doesn’t offer a touchscreen.

You can’t please all the people all the time but Humminbird has sure as hell tried with the Helix series and its 25 models – and I think has done a very good job of it.