What was known as Humminbird’s “C” series – or its core series – was in the market for what seemed like forever without a redesign. In the world of marine electronics this was a rarity amongst models from other companies that consistently have biannual upgrades. If it ain’t broke, don’t fix it may have been the reasoning, and this would be an acceptable reason as the C series is loved by many anglers the world over. They were a reliable unit, easy to navigate, no touchscreen, a simple button layout and an excellent all-in-one transducer that offered class leading readings in side imaging, down imaging and 2D sonar.

2015 saw the first upgrade with the new Helix system, which we reviewed and loved. The screen was super-clear, the unit faster and the readings crisper, but the usability, rugged build and user-friendly operating system remained largely the same. Helix was the upgrade anglers wanted, no frills or fuss, just a better unit with better readings. Early 2017 saw the release of Helix MEGA Imaging or Helix G2, a world first and a huge upgrade, with performance that is unparalleled by any unit on the market in the field, and, really, any unit full stop. This Helix is equipped with Humminbird’s all-new Mega Imaging, sonar capable of 1275kw or a megawatt and it’s pretty special. We’ve had it on the Hooked Up project boat for about eighteen months and we’re blown away by its imaging capabilities. 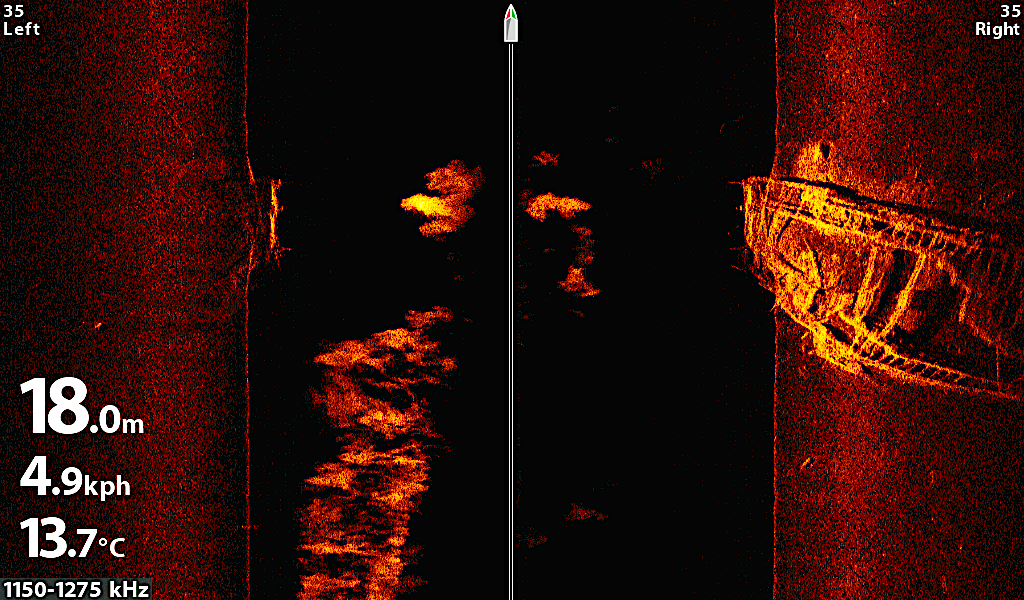 A Mega Side Imaging view of the “Carrum Outer Artificial or “The Barge” in Port Phillip Bay. I don’t think any sounder has ever shown it so clearly. 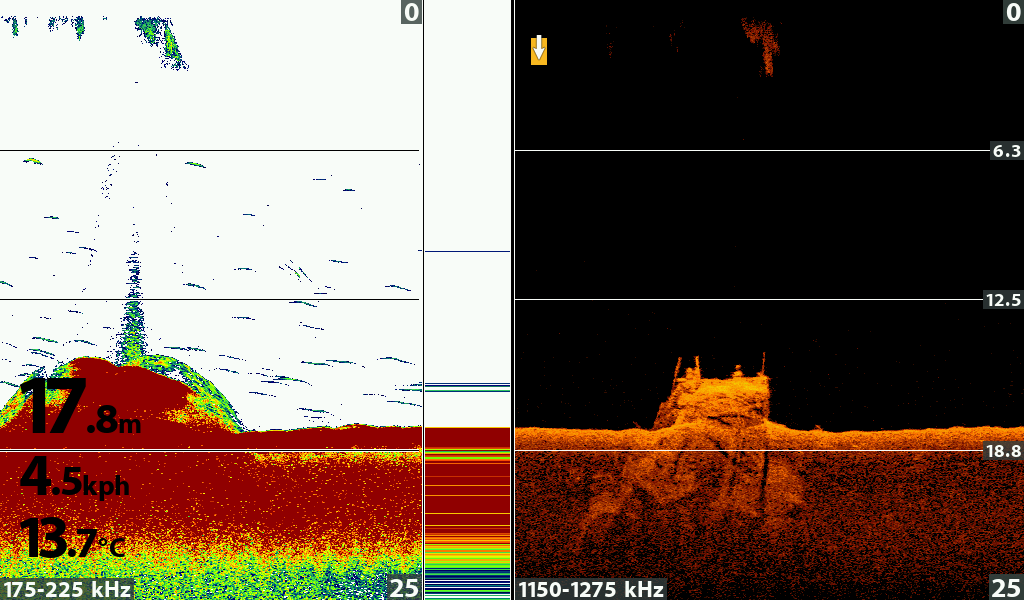 On the left 2D sonar of The Barge and on the right Mega Imaging in Down Image mode. The difference in detail is quite dramatic.

What we know already

I’ve already reviewed the Helix and most of the features, so I won’t go into detail again. If you want to read the full review of Helix, read it here www.hookedup.com.au. But a quick rundown: layout and usability remains the same in G2 as it did in Gen 1. The processor is fast, and screen extremely bright and clear as there is no touchscreen capability. Menus and functions are all fairly easy to navigate. Helix units aren’t the easiest units to operate, as you do need to remember where certain functions are and how to get to them, but it isn’t hard by any means, with all major and commonly used features easy to access at the push of a button. It isn’t laid out like a smartphone or a tablet, as many modern units are, and while I understand that many anglers have become accustomed to this, the trade-off is market-leading imaging.

The main feature that’s new in G2 and MEGA is the all-new transducer. It is larger than the previous transducer, but not so large that it is cumbersome or in the way. It has an all-metal bracket as opposed to plastic, which I love, and – importantly – it has a dedicated element for all three imaging capabilities. Some transducers share the same element for down and side imaging and the monitor just flips the image; with MEGA it’s a dedicated element, so it gives you a totally different and more detailed impression of what’s below or out to the side. 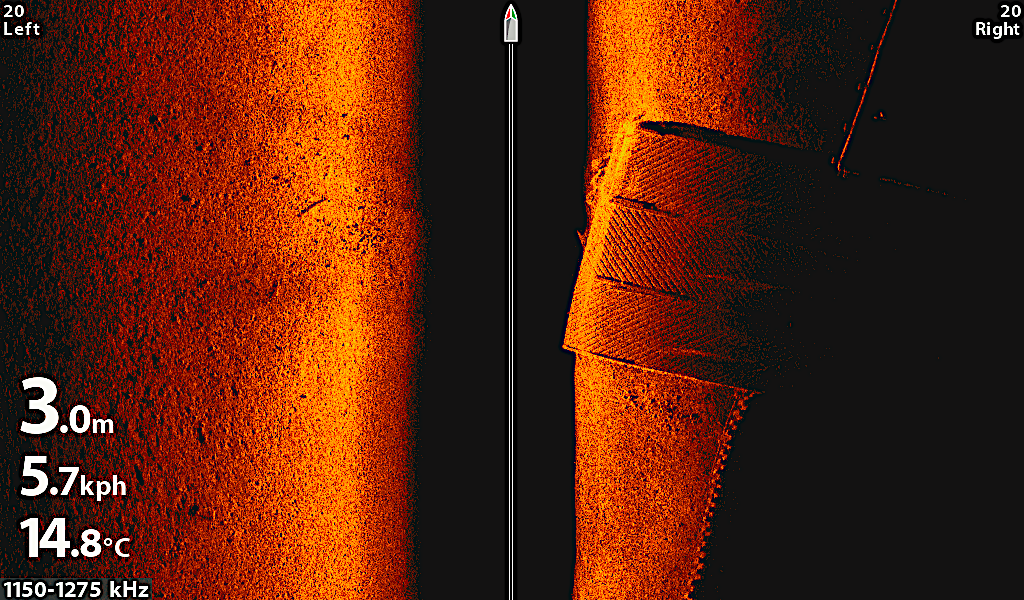 Mega Imaging in Side Imaging mode of the Patterson River three-lane launch ramp. 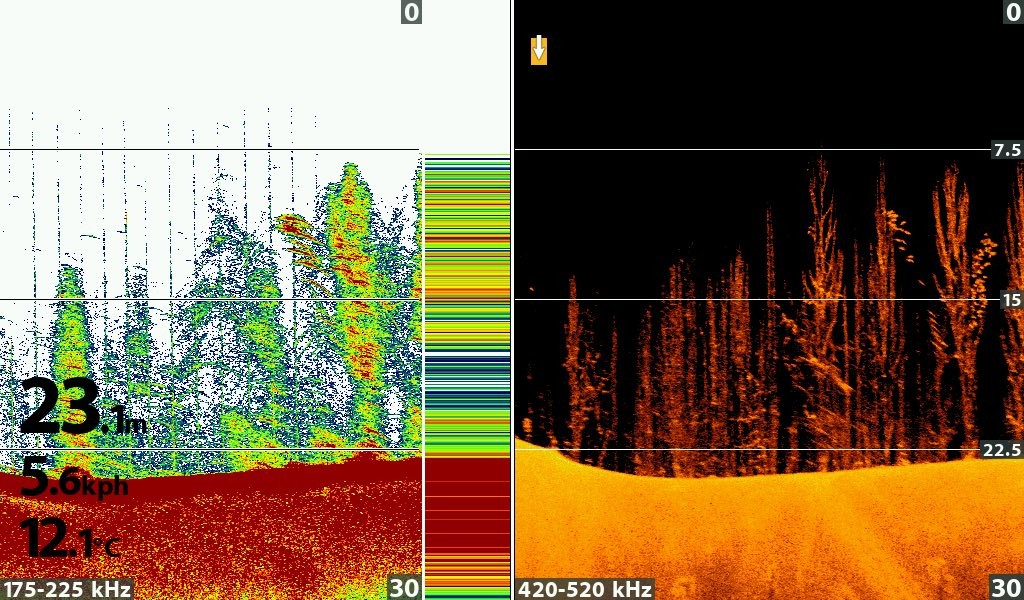 Even at 420-520 khz the Down imaging is outstanding. 2D Sonar on the left at Lake Eildon and on the right Down Imaging showing the individual fish and trees.

So what’s MEGA? Well, it’s a bold name derived from the fact the all-new transducer produces three frequencies, 455kHz, 800kHz and a whopping 1200kHz – or 1.2 megahertz, hence the name MEGA! This is a CHIRP-based transducer and if anyone was wondering why Humminbird waited so long to release a CHIRP unit, you now know why – that very powerful 1.2MHz fequency.

What is CHIRP, I hear you ask? It stands for compressed high-intensity radar pulse. What it does is send multiple frequencies in order to get better image separation. Want to me to break it down even more simply? OK, so your old non-CHIRP sounder may have sent a pulse over three snapper swimming closely together, but on your monitor it showed as only one big blob – to you it could have been a rock or a school of bait fish. With CHIRP, the multiple frequency can separate those three snapper so you can confidently identify your readings. What’s different about this CHIRP unit, though, is that it’s running 1200MHz, something that isn’t available on any other unit. This gives you an extremely detailed, crisp and clear reading, with amazing separation in all three views: side imaging, down imaging and 2D sonar.

I think I’ve probably tested, used and been on board a boat running every modern unit on the market and I have never experienced imaging as detailed, clear or crisp as this. It is truly next-level. The high frequency of 1200kHz is simply more powerful and provides unprecedented image quality. 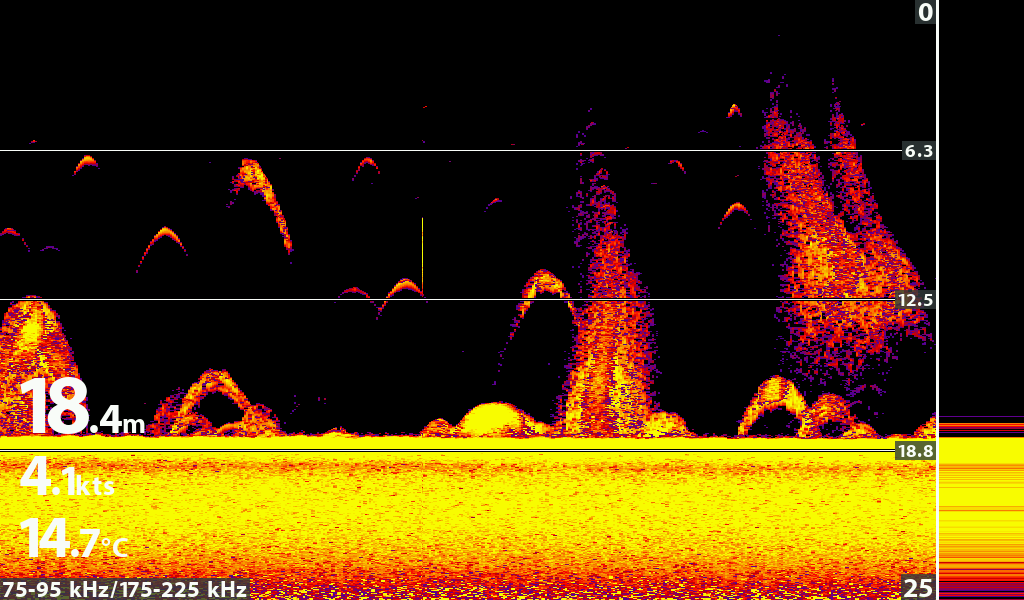 If imaging is your main priority when choosing a sounder, this is the unit to go for. It doesn’t have the bling when it comes to things such as touchscreen, menu layout and other handy yet somewhat superfluous features, but it’s better where it counts, and that’s showing you detailed imaging of fish and structure. With regard to imaging, I believe this is the best unit on the market, it has no peer in its price range. 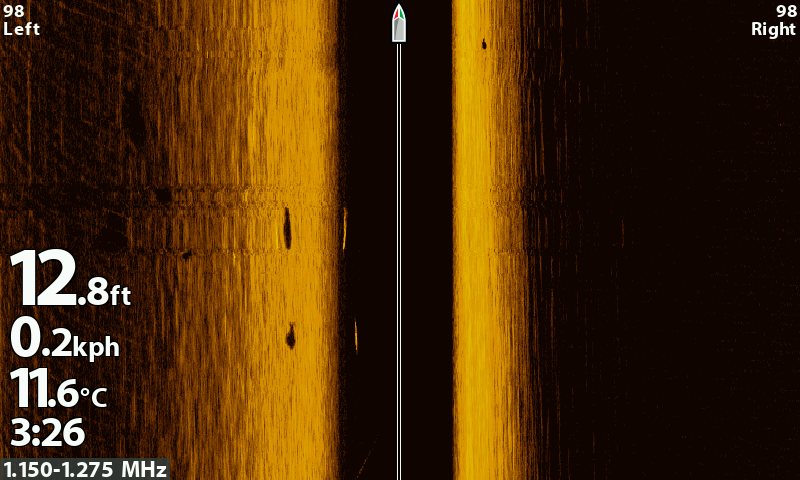 Above & below:  Golden Perch in Copeton Dam 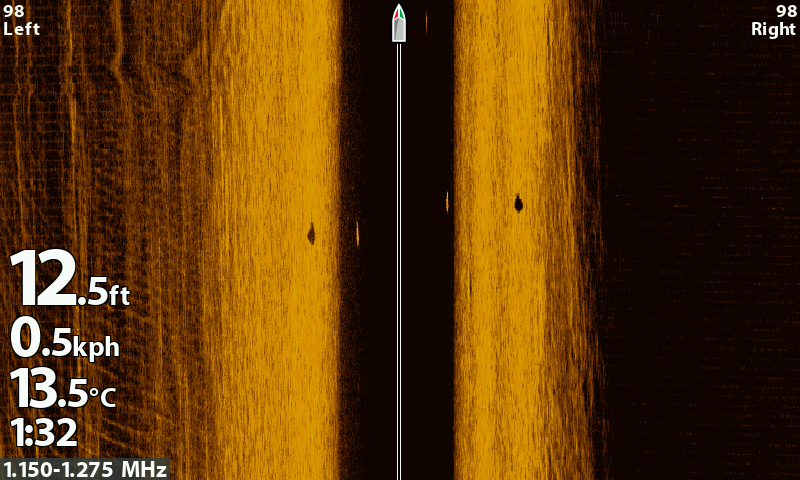