What may come as a surprise to many is that the Minn Kota electric trolling motor was first invented by O.G. Schmidt in Fargo, North Dakota, in 1934. Its name comes from an amalgamation of Minnesota and North Dakota as Fargo lies close to the border of both states.

Minn Kota’s electric motors have obviously come a long way over the past 80 years and what was one man’s smart idea has completely revolutionised fishing in the modern age. What was once just a great idea that allowed for quiet and easy trolling over the Great Lakes without the use of a fuel-run engine has developed into something far greater. 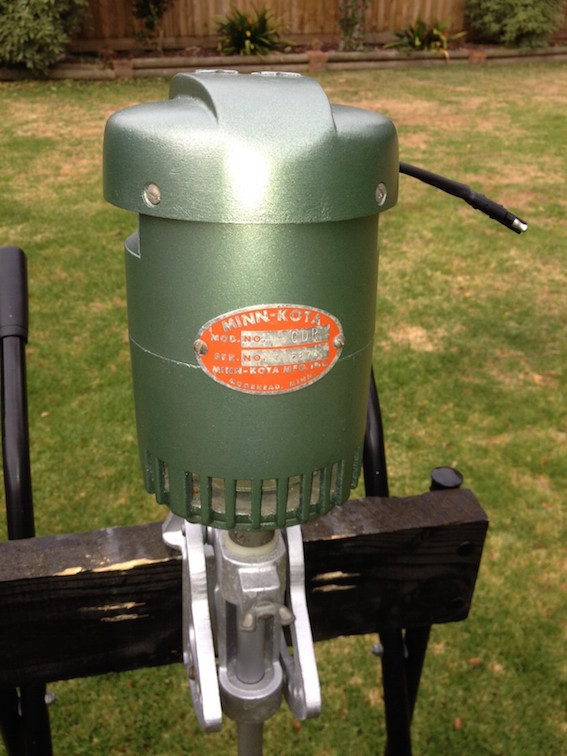 What’s it good for?

These days Minn Kota make a lot of products. Everything from trim tabs and trolling motors through to the commonly seen bow-mount motor, which is often seen on the front of sport fishing vessels. I have one and use it most often out in the bay, where I have had countless fisherman ask me what I use it for. It’s often seen as just for targeting bream in rivers and estuaries or for trolling in lakes.

Although it’s been through many technological evolutions over its 80 years, with many being world firsts, where things changed dramatically for the Minn Kota and fishermen was in 2010 with the release of I Pilot. This was the first wireless GPS trolling system to be implemented into a motor and its advantages are endless.

I have a Minn Kota I Pilot Link, which is a slightly more advanced version of the I Pilot that allows you to connect with a Humminbird GPS unit. However, I’ll base this review on the I Pilot as its key functions span across the I Link and the new Ulterra, which I’ll explain more about later in this article.

While the ability to control your boat with a bow-mount motor was always beneficial, I Pilot took it to a whole new level. There are two main functions that you will most often utilise with an I Pilot; the Spot Lock feature and the Auto Pilot feature. Read on and I’ll explain the advantages and all the different things you can do with these features.

Trolling with I Pilot and I Link

Whether you’re trolling for trout, yellowbelly or Murray cod, stealth and slow speeds are integral to your success. While modern four-stroke engines can be fairly quiet and drop down to slow speeds, they do not offer the speed control or stealth of a Minn Kota. With mine I can troll along very shallow edges and navigate my way around bends, snags and structure with ease and without the worry of hitting something and damaging the prop and gear box. Best of all I can do it with stealth and without spooking the fish. You can only trim up an engine prop to a certain level but with a Minn Kota I can easily vary its depth accordingly.

The ability to move a boat like this and have full control of where it goes opens up new fishing territory. With the Minn Kota I Link, which can connect to a Humminbird GPS/sounder unit, you can actually plot a course while trolling and the Minn Kota will automatically keep you on that bearing. With a standard I Pilot you can hit the Auto Pilot button on the motor, point it in the direction you want to go and adjust as you need; there is no requirement to constantly work the motor.

Being able to position your boat wherever you want it without anchoring is impossible without a Minn Kota. Boats armed with a Minn Kota can move upstream and keep casting upstream, which is the prime strike zone. Not only that, but you can do so right up against the bank so you’re always casting at fish-holding structure. You can do the same if working along the edges of an estuary or any form of structure in any waterway. This can be done by manually steering the motor or you can just hit the Auto Pilot button and the motor will move you in whatever direction you point it. With the boat side-on to the structure, multiple anglers can be constantly casting at fresh ground and structure. This allows for hands-free fishing and a boat that is constantly keeping anglers in the strike zone.

Gone are the days when the need for a drift chute was necessary – you’re not just slowing your drift with a Minn Kota, you’re going directly against it if you want. It enables you to put the boat in directions and water that were once not possible. Importantly, it can put you exactly where the fish are.

This feature isn’t only great for lakes, rivers and estuaries. If I am out in blue water and working a reef with soft plastics, I can use the Minn Kota to keep me constantly going up, down and around the reef without ever having to drift off or away from the structure. 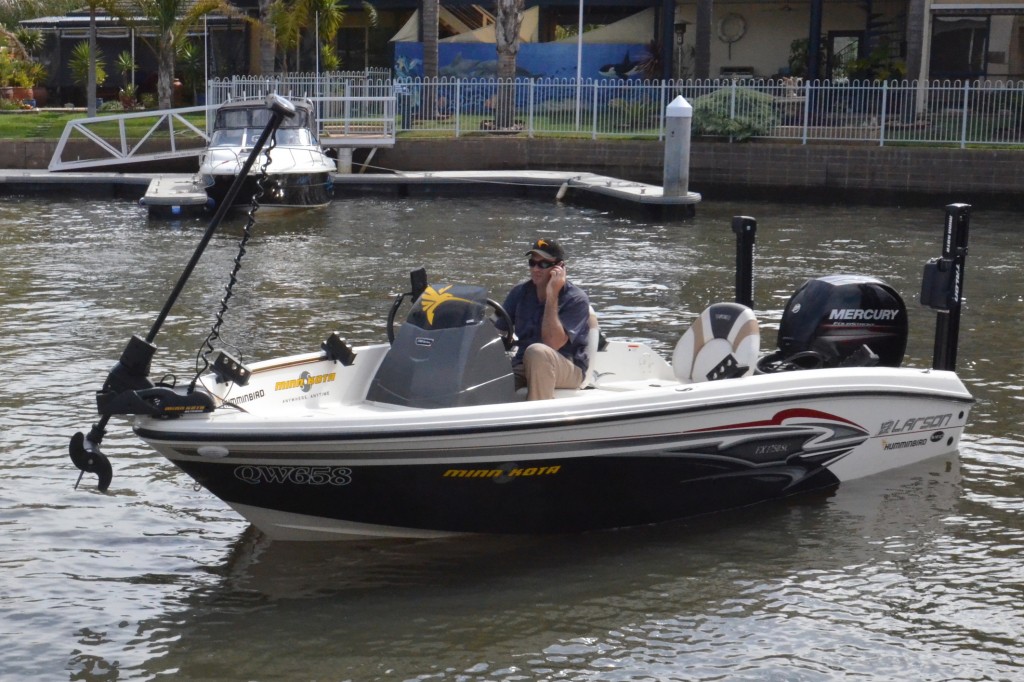 The single greatest feature of the Minn Kota I Pilot, I Pilot Link and the new Ulterra is the spot lock feature. Spot lock is basically an anchoring system that can hold you in one position regardless of what the wind, current or river flow are doing. I think any fisherman can imagine all the advantages this offers you but here are some examples of how I use it. If I am targeting snapper in about 15 metres of water, I can spot lock over the school I am seeing on my sounder and keep casting over the fish. If I see a great snag, such as a fallen tree in a river, I can spot lock in front of that snag and keep casting along it. This is a great technique for when you’re targeting fish that respond well to reaction strikes and need to be pestered, such as trout, cod, bass and golden perch.

I also often use it to hold over shallow squid grounds where I can fan out my cast all around the boat. Doing this means the boat never spooks the squid and I can work a whole reef system without moving.

Maybe the best aspect of spot lock is when working secondary banks targeting fish such as bream and flathead. Bream and flathead will often sit on secondary banks, which are drop-offs that drop down again from the main bank you can see from the shore. With the Minn Kota I can spot lock myself just in front of the bank and present lures along it. Once I’ve spent time in one section, I just move further along the bank, spot lock and repeat the process.

All these methods of using the Minn Kota have caught me hundreds of fish that I would never have been able to without it. Another great feature of the Minn Kota is using it to get your lure back out of snags and trees. It does require some quick work with the remote but it certainly saves lost lures!

Ease of use and durability

That’s a fairly large rundown of how you can use the Minn Kota and all its advantages. If considering a purchase, you’re understandably wanting to know how it performs and whether it’s a strong unit. I’ve had mine for just under three years and cannot fault it. It’s very easy to use and I absolutely thrash it. It has hit many rocks and trees in skinny water and it gets a lot of use. Mine has an 80lb thrust and runs off two 12-volt batteries. I don’t need to charge them very often and I use the unit a lot, so it’s very good when it comes to battery consumption.

My boat weighs around 900kg and the 80lb thrust can move it very quickly at full speed.

Minn Kota has two new and very exciting innovations out this year. The first is the Ulterra. The Ulterra can auto deploy and stow away the shaft and motor. I recently had the pleasure of testing one of the freshwater versions and it’s pretty amazing. While this is a luxurious feature and its main purpose is to support laziness, its still very awesome and I want one. As easy as it is to do, everyone always argues over who is going to put the motor down and pull it up; the Ulterra solves that. You could also use it to lunch and dock the boat, check the Ulterra ad on YouTube to see how it’s done.

The other new innovation for Minn Kota is the Terrova 112. The Terrova offers 112lb of thrust and a 60inch shaft for big boats. This means anglers with big offshore centre consoles can now use a Minn Kota in offshore fishing situations, which will completely change the way anglers approach offshore and pelagic species.

If you own an open boat a bow-mount Minn Kota is going to open you up to a whole new world of possibilities in your fishing. Whether you own a small tinny or a 25ft centre console there is now a product that suits your needs. They are amazing things!