Ask any group of anglers what they want from their sounder or GPS and you will get several different answers. Some anglers value 2D sonar over newer tech such as Down and Side Vision, while others are all about the best readings they can get at extreme depths. There are without doubt certain models and transducers that perform better in specific fishing scenarios; however, I have just spent the past four months with what could be the best all-rounder on the market. 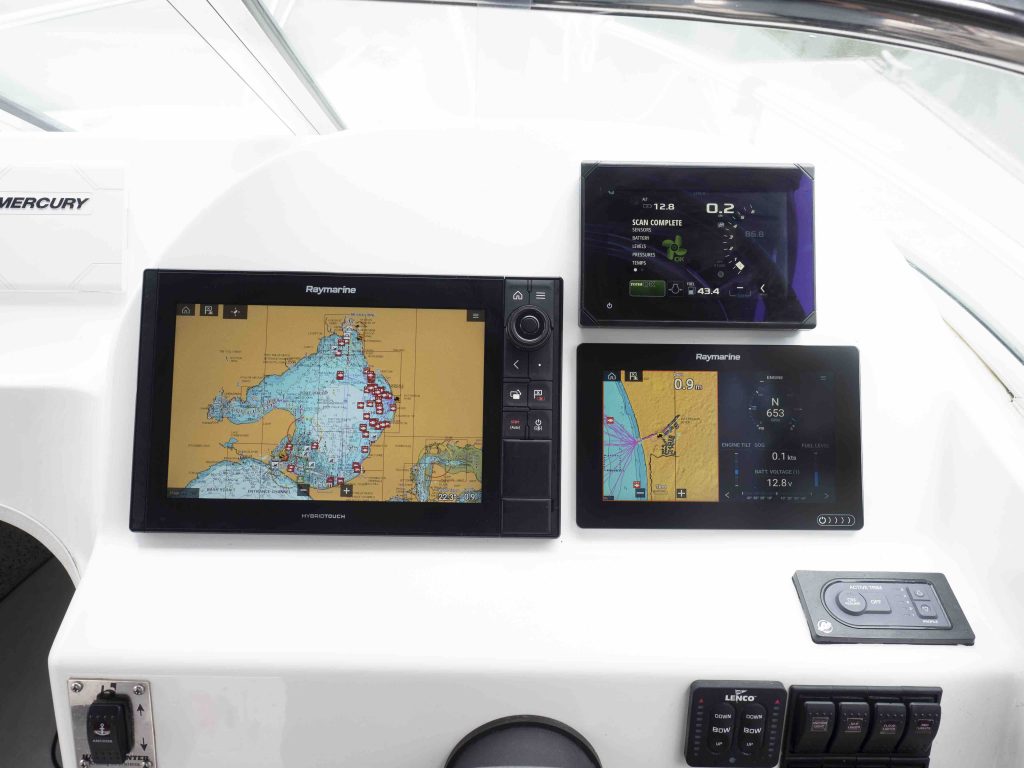 I had been running twin Humminbird Helix units with a transom mount transducer on Hooked Up’s Haines Hunter project boat for around 18 months. They’re great units that we have moved on to our new centre console and will be showcasing in a future issue. So when it was time for the next round of electronics for the boat, I was keen to give the new Raymarine Axiom Pro a run. I had tested the Axiom 9 previously and been very impressed with the unit’s usability – it was fast, easy to use and with a transom mount RV-100 transducer provided excellent readings. So when the Axiom Pro was released, offering a quad core processor, a super-bright IPS LCD screen and hybrid touch (it has buttons as well as touchscreen) I was very interested, once I learnt I could pair the unit with Raymarine’s RV 200 thru-hull transducers that enabled 1kw CHIRP Sonar, Down Vision, Side Vision and Real Vision, I was sold. I now have both the Axiom Pro 12 and the Axiom 9 installed and networked. 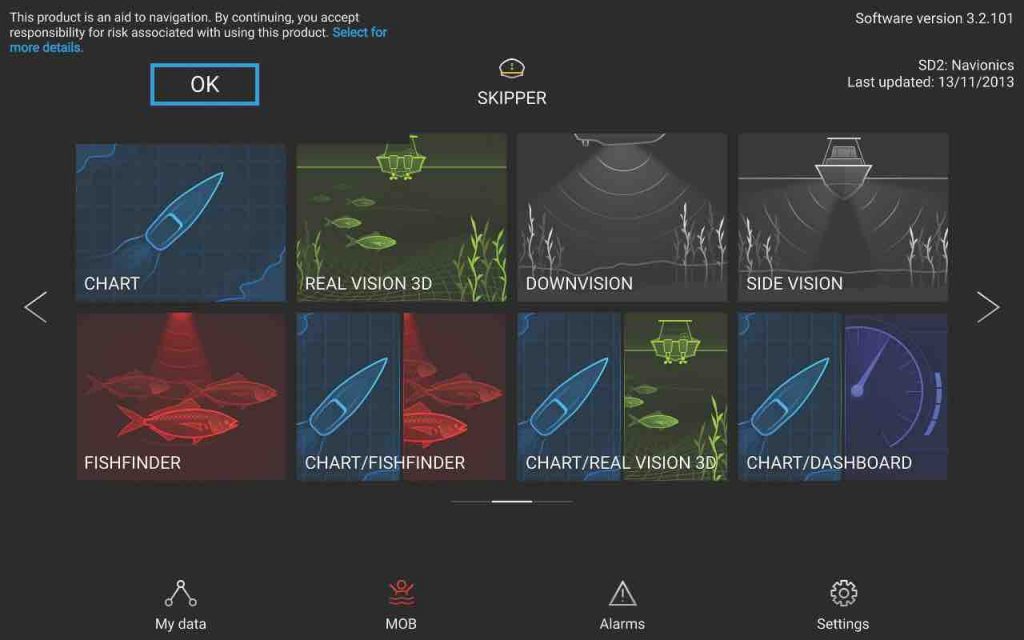 It’s hard for me to me comment on usability, as I test most sounders that come out or I fish with someone who has the latest model, so my basic understanding of navigating any unit is superior to that of an inexperienced angler new to sonar and GPS units. However, I think I’m pretty safe in saying this is the most user-friendly unit on the market.

For starters, the sheer speed offered in all facets of the Axiom Pro’s operation takes its usability to a whole new level. Powered by a quad-core processer and Raymarine’s Lighthouse operating system I have experienced zero lag, whether I’m zooming in and out on my detailed maps or tracking back and forth across a sonar reading.

Large coloured icons that represent all your main functions are easily selected via the large turn dial or by touch. Accessing menus in single, dual or multi-screen mode is easy and intuitive. Things are placed where they should be, they’re easy to find and select and – once you’re in a menu system – it’s a breeze to navigate. Little things, such as large Home and Menu buttons also available as touchscreen icons, mean that whether you’re using touchscreen or the Hybrid Touch buttons, you get to where you want quickly and easily without giving it thought. The addition of a back button is very handy – it gets used more than you’d think, and a dedicated button to bring up all your data such as GPS co-ordinates is an excellent feature all skippers will appreciate. These are smart yet simple features that anglers have always wanted in their units and it shows Raymarine has spent time with boaters and anglers learning what they actually use most often. You don’t need to look for anything on this unit or navigate menus to find it; it’s all there at your fingertips. 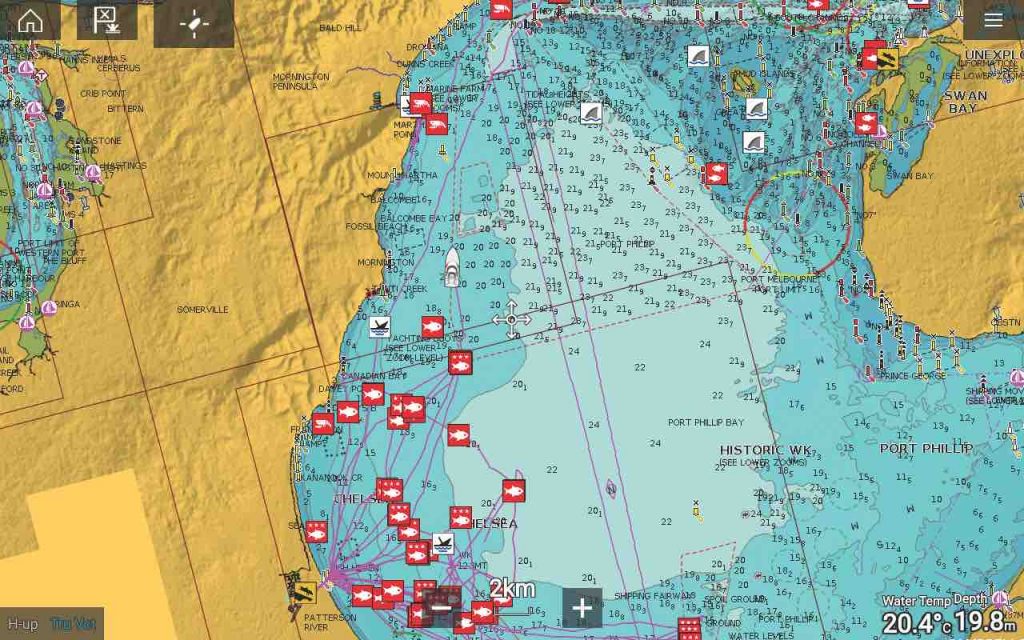 As an angler who often launches in the dark, one of my favourite features is the backlight dimmer ­– hit the power switch and a pop-up screen allows you to easily slide a large icon down or up to adjust and you’ll also find a large icon for taking screen shots. It’s frustrating to reduce your backlight for night driving then find once the sun is up you can’t see your screen at all to get the brightness back up. It’s safe and smart.  Of course, a large waypoint/man overboard button is there for quickly marking fish, structure or an actual man overboard.

Adding waypoints and data is a breeze with an intuitive Qwerty keyboard; however, I would appreciate more icons for different marks, species and locations. One of my favourite features would have to be how easily I can customise all my data such as co-ordinates, temperature and depth. Adjusting what data appears on each page is simple: it can be dragged and placed wherever you like and the text size can be adjusted – an amazing feature that is simple to use and can be changed depending on the fishing you’re doing.

I fitted the 12 with a Navionics Platinum card and I run my maps with the detailed data option – and it’s the quickest and most user-friendly navigation unit I’ve ever used. I can be zoomed out looking at half of Australia then back to within 15 metres of my boat without the image dropping out or lagging in any way – it’s sensational. Marks appear instantly and it tracks the boat beautifully. If you move your map off-course of the boat and you want to come back to where you are, there is an icon that brings you back instantly. It works as any skipper would want it to and is reassuring when travelling offshore or at night – I know what’s happening around me and ahead of me.

The Axiom Pro RVX offers you a lot of sonar options in Down Vision, Side Vision, 2D and 3D Real Vision. As I was largely fishing open water and searching for fish more than structure, I used the 2D sonar 98 per cent of the time. This was largely due to the fact that it was the sonar that worked best for my fishing applications and also because it is outstanding 2D. The Down and Side Vision through the RV 200 is great: it’s by no means super hi-def but it does an excellent job. The Real Vision 3D takes a bit of getting used to but once you do it’s a cool feature that many anglers will appreciate, especially game fishing offshore.

I have owned quite a few different sounders over the years and this is by far the best 2D I have used; anyone who came on board was quickly impressed. Understanding whether a sounder is any good can only be confirmed by catching fish to get an understanding of what you’re sounding, and it wasn’t long into snapper season that I quickly got an intimate understanding of what I was viewing. 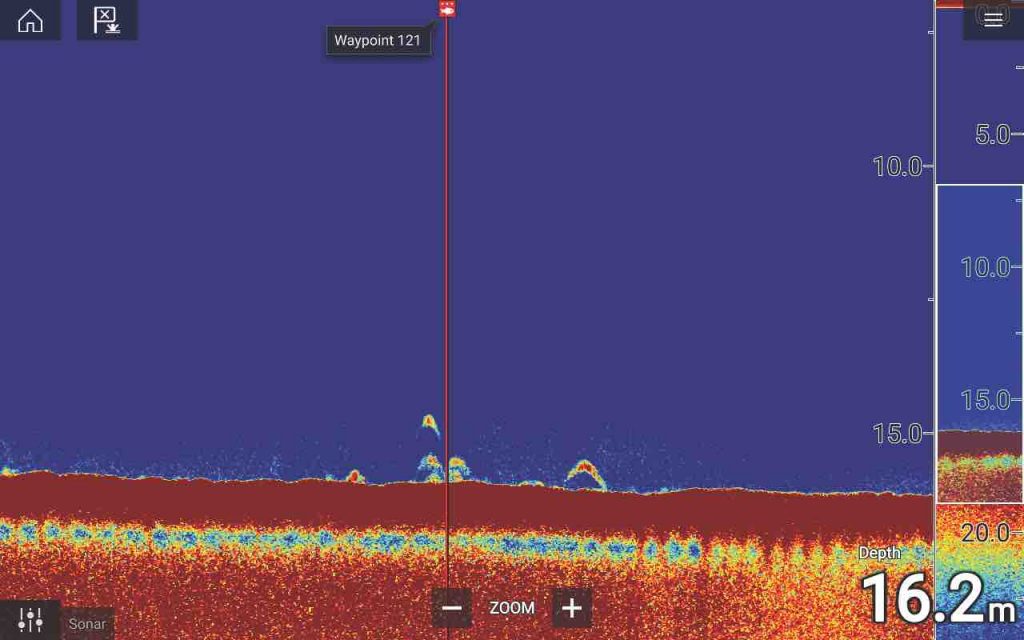 The first and most important thing I came to appreciate was the honesty of the readings, as I’ve always had an issue with units that showed me what I consider “ghost fish”. These are solid sonar returns with modest gain settings when I can visibly see there are no fish under the boat or I’m in a situation where it’s highly unlikely that there would be this amount of fish under me. This never happens with the Axiom: if there isn’t anything under the boat, there isn’t anything on screen. Target separation is outstanding, allowing me to easily identify the difference between a school of small snapper and a school of baitfish. I could easily identify school fish of around 3-4kg from much larger fish and even subtle weed banks in shallower waters were identifiable 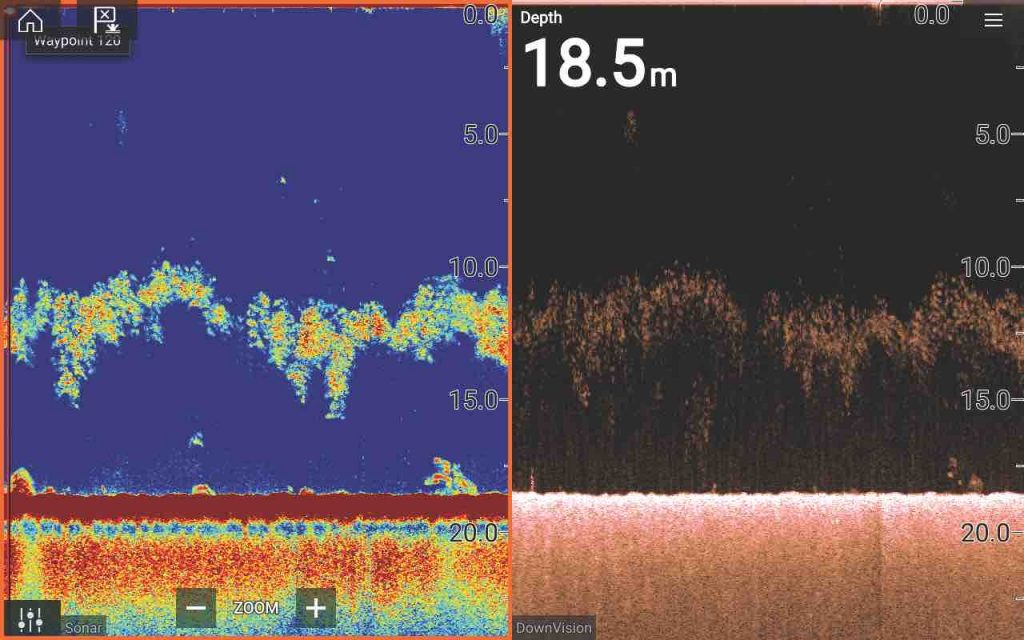 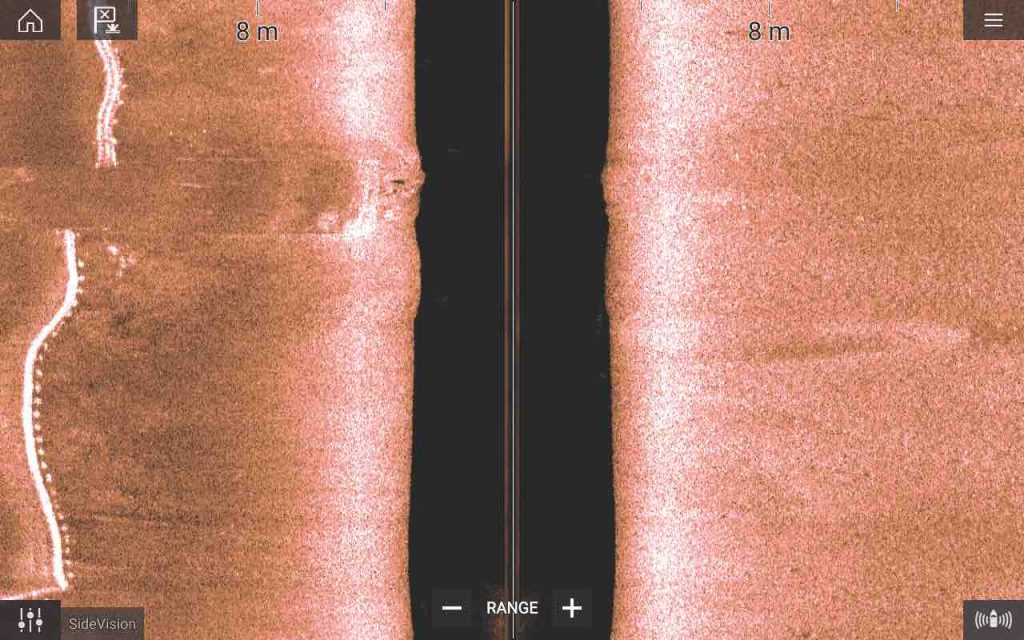 The Axiom Pro is an outstanding unit that is intuitive, user-friendly and – armed with the RV 200 thru-hull transducer – offers responsive sonar with outstanding returns. Any angler who wants a unit that will provide easy and trouble-free use with sonar capabilities to cover a huge range of depths and species should consider the Axiom Pro. 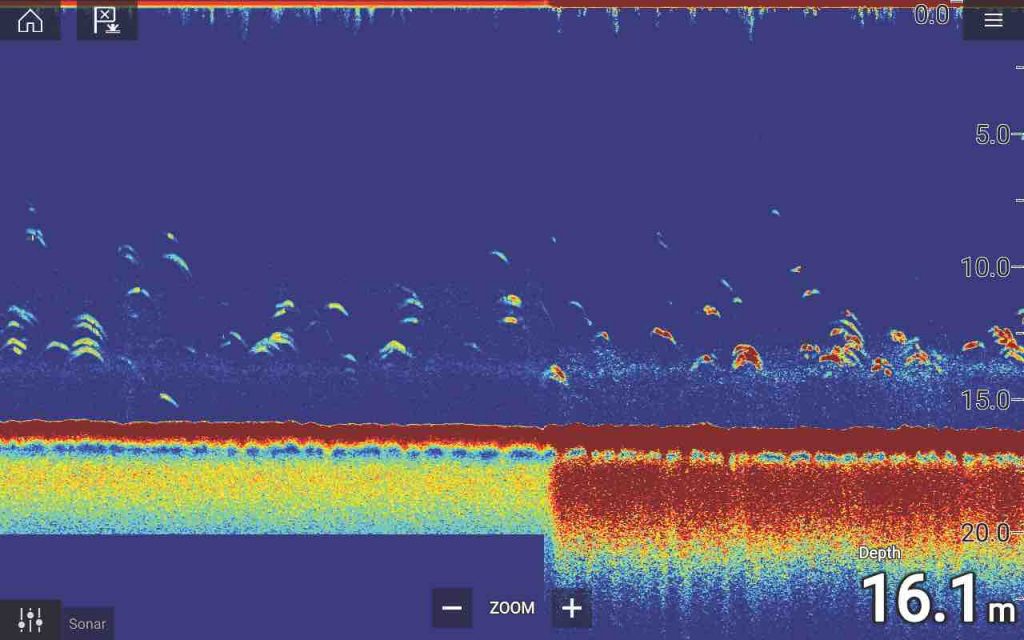 Words & Images: Colby Lesko The Bluewater Bullet Bait is one sexy-looking lure. It’s the one that catches your eye