A few issues back I reviewed the new Black Magic KLT, the target species was snapper and I was very impressed with Black Magic’s new inline circle hook – you can read the full review at hookedup.com.au. As promised in that review, we wanted to test the KLT on marlin, and more specifically with live baits either pitched or trolled. There are few options on the market and Black Magic sent me down quite a few packets which I handed out to Ben Donegan to review and various other skippers going on a recent multi-boat fishing trip to Eden and Mallacoota (you can read the full story about the trip in this issue). Rather than just Ben writing a review, I also got feedback from various skippers on their experiences with the KLT.

We anglers tend to be biased and creatures of habit and sometimes we get stuck in a rut, so it takes a friendly nudge to try something new. I was recently at my local tackle shop, Game Fishing Fever, discussing marlin tactics where owner Lee Rayner handed me a pack of the Black Magic KLTs to try. “Nah, I’m all good. My trusty old circle hooks have always done well and I don’t know why I would change,” was my response.

“Benny, give them a go mate. They are new and have the slick PTFE coating, a great mid-weight hook that is still super-strong but also light enough to pin those fussy fish.” 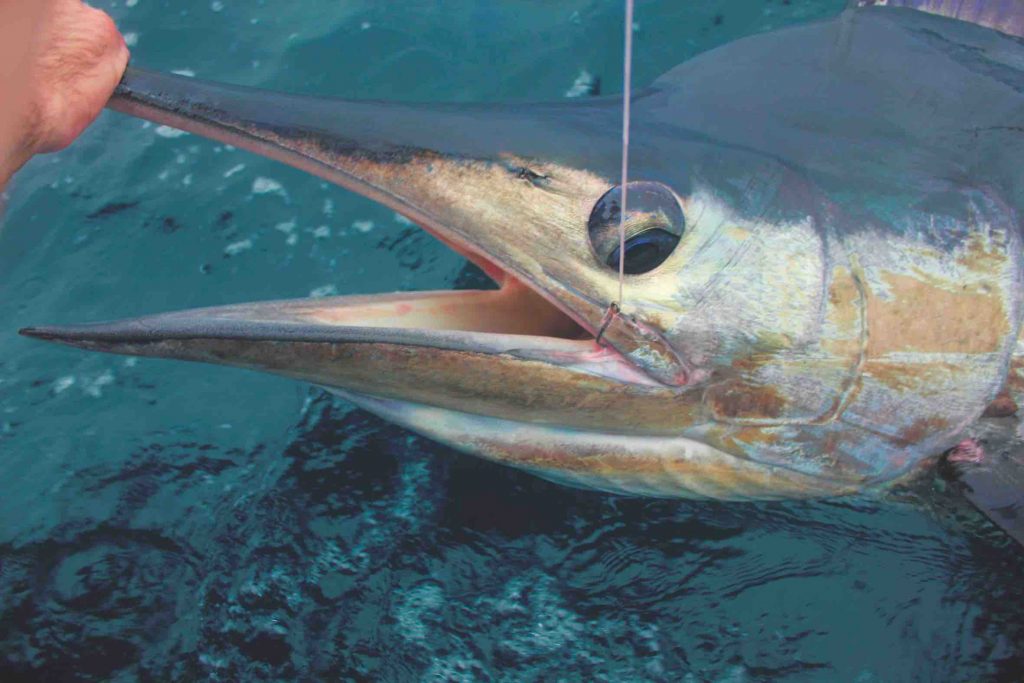 Whilst in the spirit of trying new things, I grabbed a spool of the new Black Magic 150lb Pink Shock Leader, too. I handed over my hard-earned and headed off to tie up some new hook rigs. Not long after I got home from the shop Kosta called and said he had some new hooks and leader he wanted me to test for Hooked Up! I could have saved a few bucks there but I’m always happy to support my local dealer – the information you get from a good tackle store is priceless. I’ve always used 10/0, 11/0 or 12/0 Eagle Claws and I found you will not suffer any losses moving to the 8/0 KLTs as the gape is slightly larger. The taper of the wire is a perfect midpoint between a medium and light gauge and has minimal flex. We tied up some test rigs and I got my 98kg deckie to hang off them as hard as he wanted. No breakages, no snapped hooks. 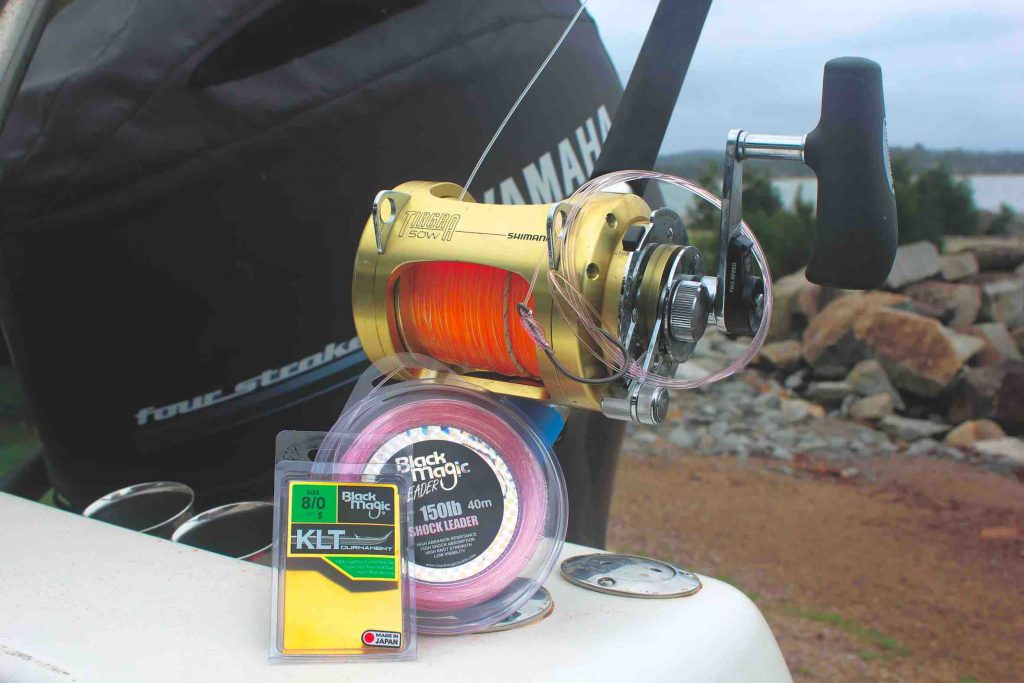 The KLT are dangerously sharp – almost too sharp. When rigging live baits I kept pricking myself, but the upside is that you don’t miss too many bites. This season, if the fish has eaten the bait, we have got the hook-up, and as the pics show every time has been a textbook hinge of the mouth hook-up. The coating offers exceptional abrasion resistance after more than a day of salt water abuse in a slimy tube. I tested the KLT against an Eagle Claw; the two hooks were both brand-new at the start of the day and, as you can see from pics taken the next morning, there was a huge difference. Big thumbs up from me and the boys – these are a new favourite hook. 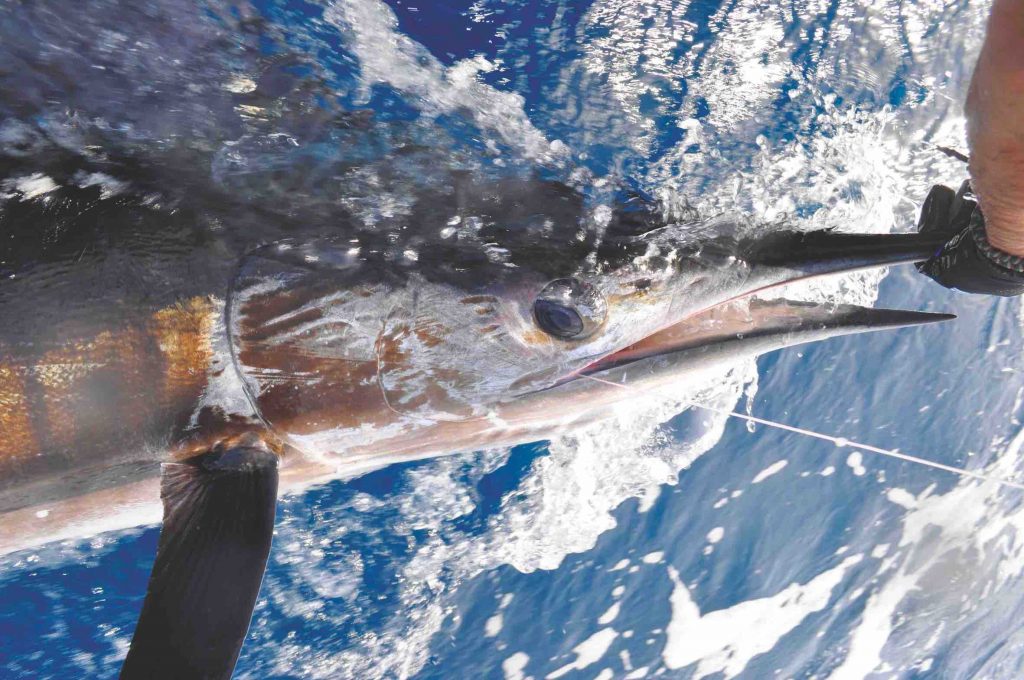 The Pink Shock Leader is supple and easy to tie a snell and various knots. It’s still quite low-visibility in the water for a mono and handles abrasion from a marlin beak really well. You almost need to take out a new mortgage to buy pink fluorocarbon leader – it’s so expensive and seems to just melt away into your rig bag. This season I wanted to find a good alternative and I reckon this stuff is it. The 150lb handled a few big stripes this season already, and you can swing off the fish with confidence. It has more stretch than fluoro, so if you are new to leading fish you get a little bit of “give” in the line rather than just pulling a hook or cracking him off. As mentioned, we also tried using no crimps this season for hook rigs and I can give that the big thumbs up too. The good old perfection loop lives on, and with this leader material it seems to almost melt into itself, forming an unbreakable connection the more pressure you put on it. We have caught a few marlin on it already this year and can report no failures. This at a great price, too, so you can buy more! 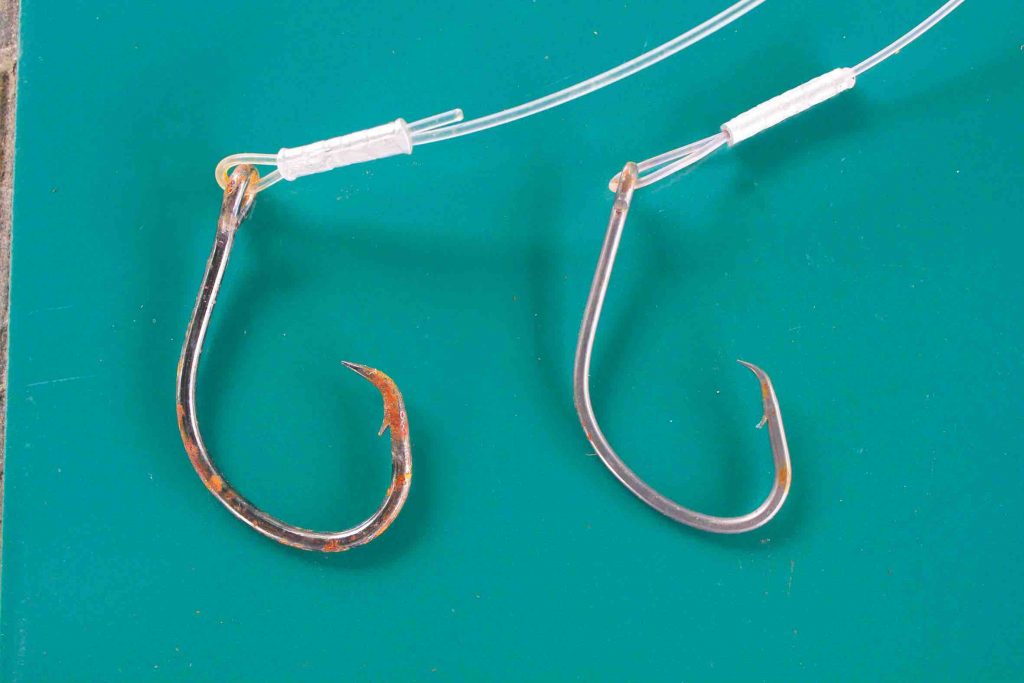 All I’ve used the past five seasons was Eagle Claw circles as that’s really all that was suitable and readily available at my local stores and nobody I fish with knew of a better alternative. When Kosta called to say he had a new hook and leader for me to try I was a little sceptical. Straight away, though, I could see this was a good hook – the 8/0 is the right size and it’s very sharp. The Pink Shock Leader was definitely thicker in diameter than the pink fluorocarbon I usually use but we tagged seven marlin on the weekend with KLT/Pink Leader rigs and that’s a pretty good testament to the quality of the gear.

The hooks are great, we converted all our strikes with solid hook-ups in the jaw. The 8/0 is the perfect size and they don’t bend or rust up at the end of the day – you can’t ask for much more. They’re sharp, strong, don’t rust and hook marlin.

These hooks are awesome and so is the leader – we hooked and landed multiple fish on these rigs. The leader showed minimal wear after each fish and the hooks could be cut off and reused even after spending hours in the tubes, as they don’t rust and that four-point edge is crazy sharp. I’ll keep buying them and I’ll use them for bottom bashing and deep dropping. 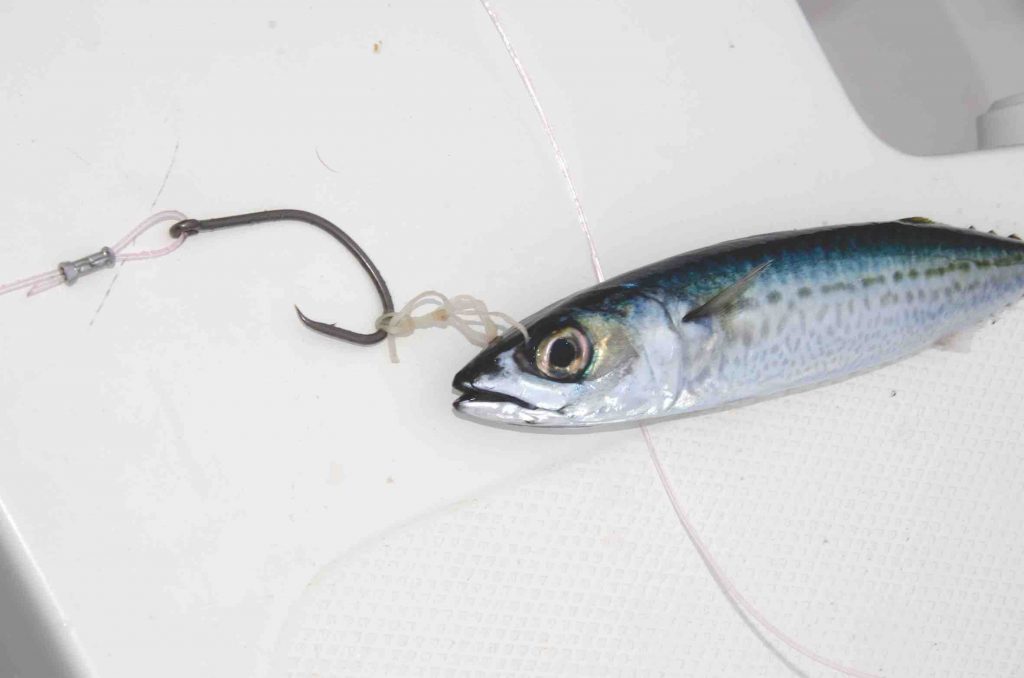