When I received the new Bluewater Saury my initial thought was, “Whatever eats this lure is going to be big”.  Like many minnow-style trolling lures it looks impressive straight out of the packet with its 9/0 VMC single hooks, heavy-duty split rings, nose-wired tow point, 230mm body size and striking paint job, but like all lures the proof is in the water.  The Saury features patented “LiveGlo” fluorescent technology, incorporating luminous and ultraviolet additives that are somewhat invisible to the human eye but not to predatory fish.  OK… let’s see (or should I say, let’s let the fish see).

Of course you can target a range of pelagics on a 200mm+ trolling lure but there was only really one I was chasing – Spanish mackerel.  In late January on the inner reefs off Noosa, when the water is 27 degrees and as blue as your neighbour’s swimming pool, Spanish mackerel start to show up in patches hunting the ever-increasing summer bait balls that congregate along the reefs.  They are very hit ’n’ miss – there one day, gone the next – and quite often will not take a trolled hard-body lure, instead opting for a slow-trolled or floated bait.  Last season I caught several mackerel but not one on a trolled lure so I was curious to see what 2019 would bring. 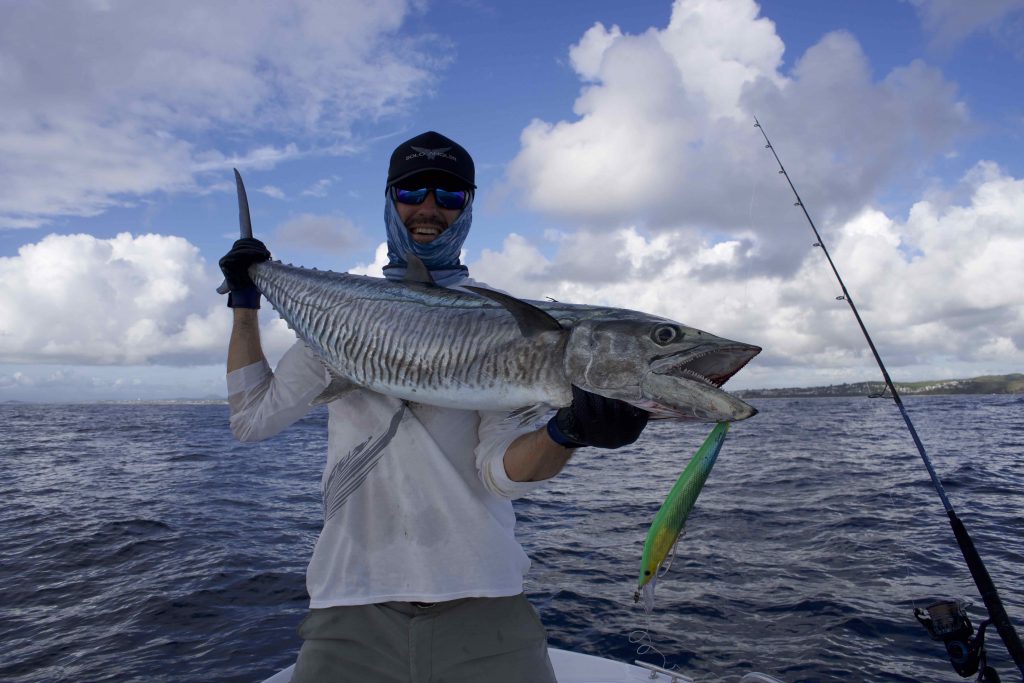 When I troll fishing solo I deploy three lures maximum but on this particular morning I deployed only two, a deep diver (10m-plus) and the Splice colour Bluewater Saury, which claims to dive to 5m-plus.  Tied directly to 80lb leader straight out of the box, over the side she went with a distance of approximately 30m behind the boat and a trolling speed of six knots.  I varied the speed during the first five to 10 minutes from six to eight knots to test the lure’s stability and action and the tip of my 7ft rod had a constant smooth vibration, which is always a good start.

Within 10 minutes I was marking some fish in the top 10m of the water column, which is always promising but, on the past three trips I had been plagued by cobia and sharks so I wasn’t getting my hopes up too soon.  The first hit came shortly after sounding a big fish at five metres and it took the Saury.  The first run was long, which usually means a Spanish, and I was calling it for a solid fish.  The question now was, would it stay connected?  I had another line to clear so with the boat slightly in gear I kept pressure on the fish while positioning the second rod at arm’s length so as to clear it as fast as possible. 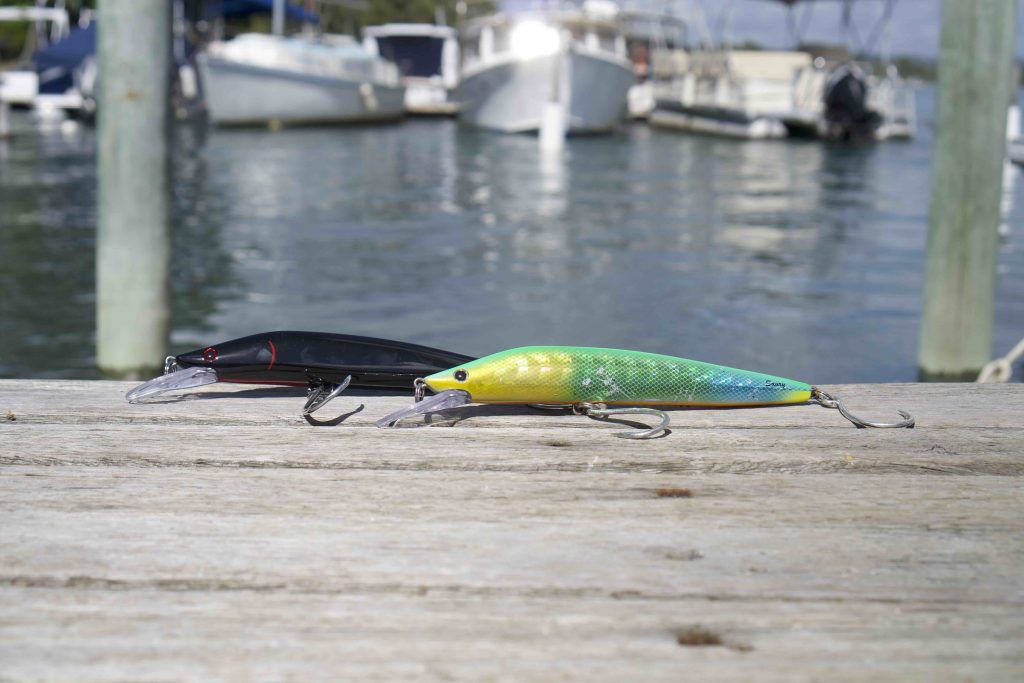 With the second line cleared I could focus on getting fish to boat and as always with Spanish mackerel, after the second run they are pretty much beat, especially against 50lb mainline.  The next concern is, how is this fish hooked, will it shake its head and throw the lure or is it locked up.  With the fish almost boat-side I noticed two things: both hooks were in the fish with the front hook in the corner of the mouth and the rear hook on the inside front of the mouth.  The fish ate the middle of the lure, as they so often do, turned sharply and copped the rear hook on the turn.  It wasn’t going anywhere other than in my boat.  Once settled beside the boat I tailed and lifted the Spanish into the boat.  It felt like a solid fish and went 13kg on the scales.

On my previous two trips I had deployed the same lures but in different colours and on one of those trips I caught a slightly smaller model on the deeper-diving lure.  Obviously in this case, the fish wanted something a little higher, which is where the Saury did its job.  The next test of a good trolling lure is whether, after sustaining a ‘mack attack’, it can go back into the water and swim straight without any adjustment.  Over she went again and just like a new one, back into action.  One more circle in the same vicinity and another solid hook-up on the Saury.  Unfortunately this second fish got the better of me while clearing the second line but that’s fishing. 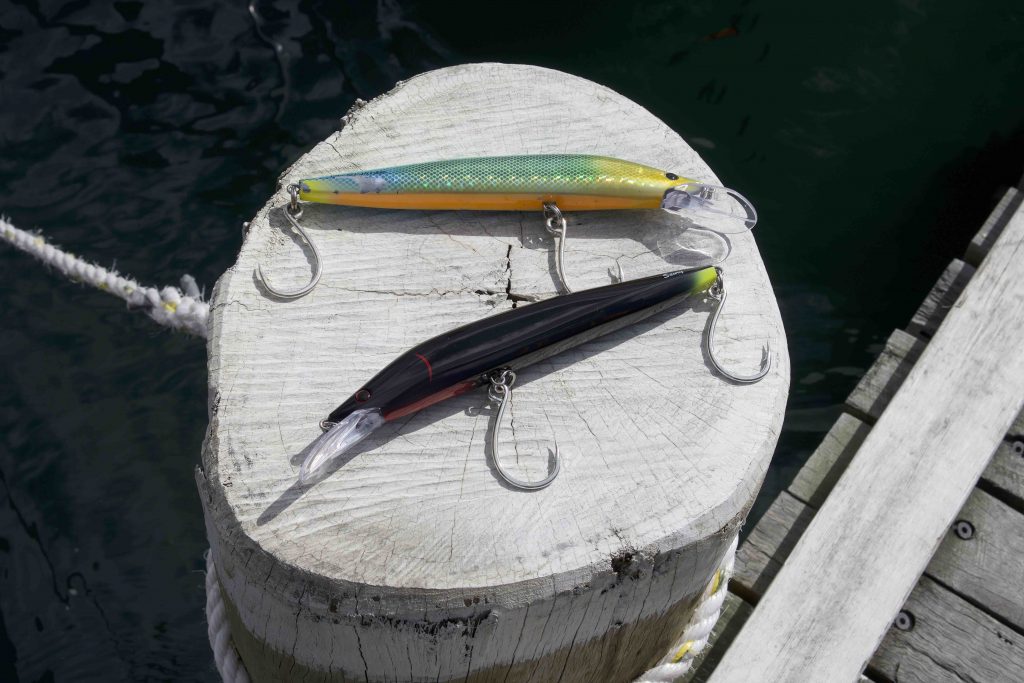 It’s amazing the confidence you have in a lure once it lands a good fish.  Instantly you stop wondering and start believing and every time you put it back in the water you have hope instead of scepticism.  I’m not one to rant about technical features of lures, I just want them to work and not cause me grief on the water.  The Bluewater Saury did its job.  It impressed me with its design, its colour and its size. It swam perfectly straight out of the packet and it hooked two fish within an hour that didn’t produce for other anglers around me.   I always have a handful of go-to lures when it comes to trolling and the Saury may have just manoeuvred its way into the top few. 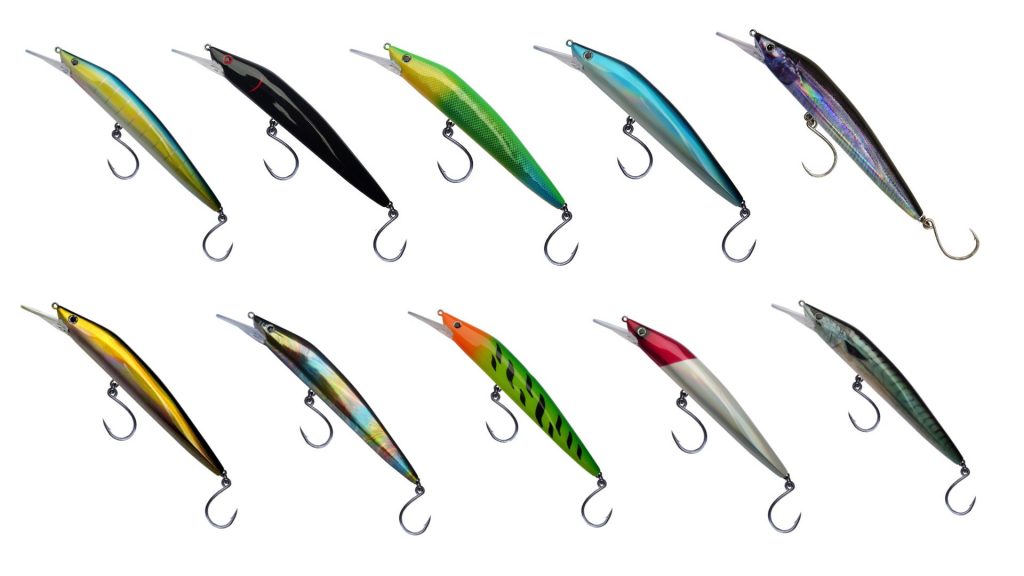