The Gan Craft Jointed Claw has been an extremely popular glidebait around the world for several years. The larger models in particular are popular among Murray cod and flathead fishermen. However, Gan Craft has recently released a 70mm model. Like many anglers, I love throwing glidebaits as there is something satisfying about watching an extremely lifelike lure swim. In years gone by, only large swimbaits and glidebaits were available, with smaller models gaining popularity more recently. The release of lures such as the 70mm Gan Craft Jointed Claw has opened up several exciting avenues of catching smaller estuary and freshwater species on these unique lures. 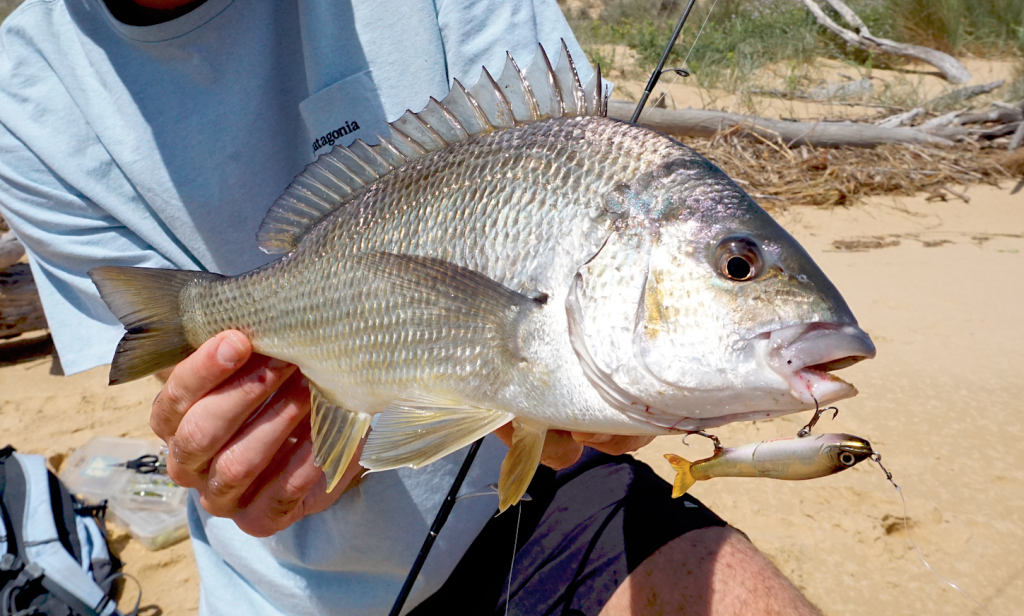 The JC70 is a is available in both slow sinking and floating models and I had the slow sinking model for review.  There aren’t many, if any, small glidebaits that exist with the same quality finish as the 70mm Jointed Claw. It comes ready to swim out of the packet with small, fine-gauge trebles that are super-sharp and have great penetration. However, due to the fine-gauge nature of the hooks, I would recommend carrying spare size 14 treble hooks with you where heavier drag pressure may be required. After catching a few fish where I needed to hit the brakes, I needed to change the hooks after several hook points straightened. The 70mm profile and ultra-realistic finish represent a small baitfish perfectly, making it an ideal lure for a large range of species such as bream, flathead, estuary perch, Australian bass and even luderick. Out of this broad range, the lure appealed to me the most as a bream and flathead lure. 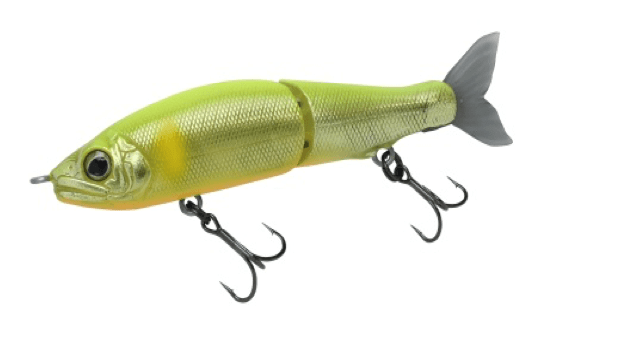 The slow sinking Jointed Claw offers great casting distance and good accuracy. I can’t speak for the lighter, 4.1 grams floating model, but at 4.6 grams the slow sinking model did cast very well. Obviously, an angler’s ability to cast a lure depends of the type of tackle used to cast the lure and any 1-3kg or 2-4kg fishing rod would have no trouble casting the 70mm glidebait with ease – and I would not suggest using a fishing rod much heavier than a 2-4kg rating. 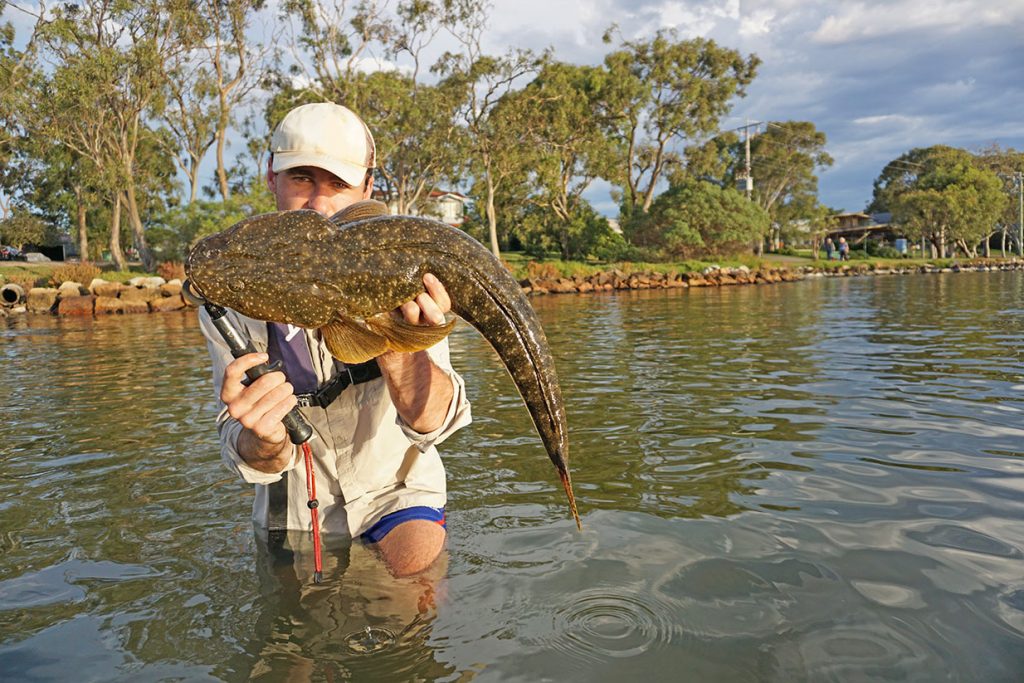 I was confident that the Jointed Claw, being a slow sinking glidebait, would be successful when fishing edges and shallow sand flats. I found I had the most success fishing along weed edges, where I could work the lure above the weed then let the lure sink down drop-offs. I recall having an unbelievable session along a weed edge where I landed several flathead on the Jointed Claw, including a large model in the low 80s, along with several small bream and even a luderick. During this session and a few others, I discovered two techniques that proved effective.

Firstly, I found twitching the lure brought results. Because the 70mm Jointed Claw doesn’t have a big, wide, sweeping glide action like some of its bigger brothers and sisters, I needed to impart action into the lure through twitches of the rod tip. Regardless of whether I was fishing on a weed edge or sand flat, I would wind up my main line until it was semi-taut and proceed to twitch the slack in the line. I found that when I would twitch or whack the slack in the line, the glidebait would dart and glide more effectively. Imparting three or four short, sharp twitches followed by a short one to three-second pause proved the most effective technique. 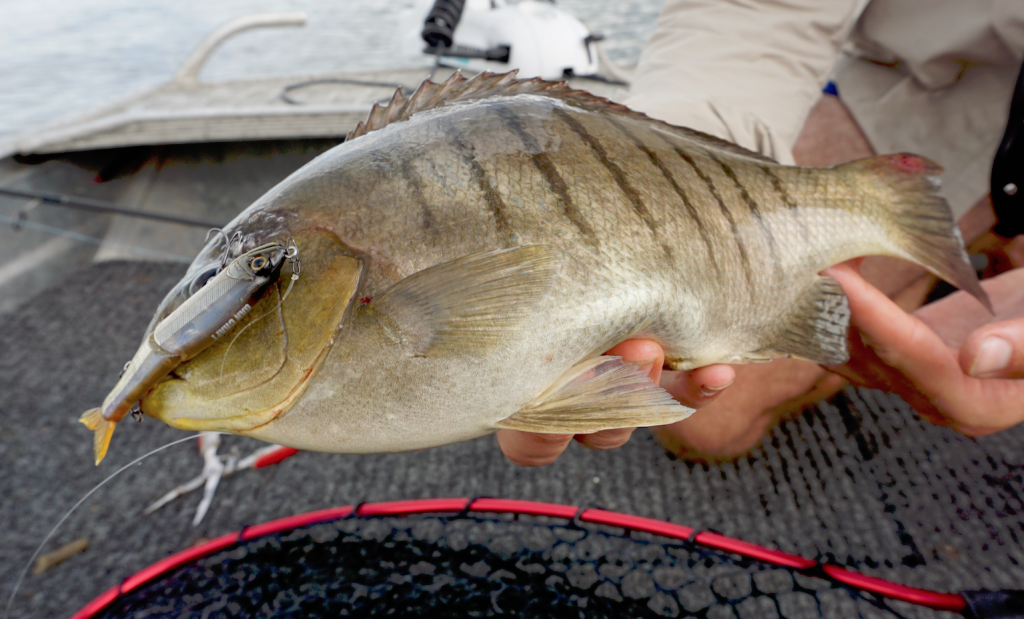 Secondly, a straight wind followed by a pause was also an effective technique when using the Jointed Claw. The 70mm glidebait has quite a tight swimming action rather than a wide glide.  I initially thought this may be a negative trait, but the tighter action of the glidebait meant it would track very straight when worked quite quickly. Three or four quick winds of the reel handle followed by a pause of approximately three to five seconds was a technique that had the most success. You can just picture the glidebait swimming up through the water column stalked by a brown silhouette, paused for a few seconds and inhaled by a flathead. 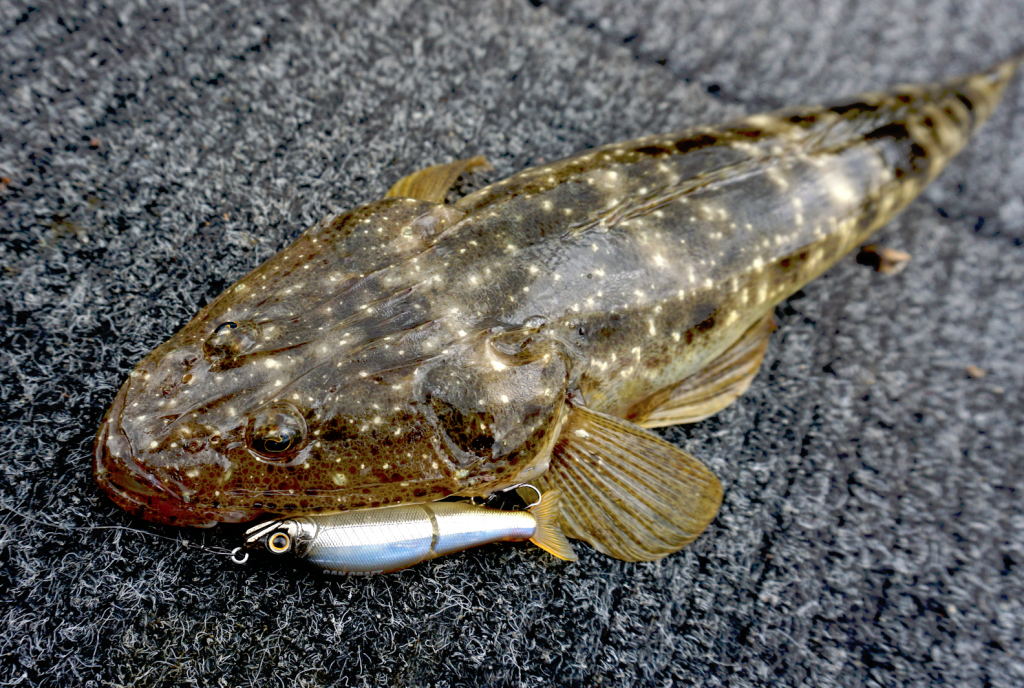 Conclusion
The 70mm Gan Craft Jointed Claw is an extremely lifelike glidebait that has filled a hole in the finesse lure market. Despite not having a ‘traditional’ glidebait action, the 70mm lure possesses a unique action that has great versatility and catching ability. I really enjoyed using the 70mm Jointed Claw – not just for its eye-catching appearance or fish-catching ability, but for the excitement of using a new type of lure and the challenge that comes with that. With my last Jointed Claw now swimming around in the mouth of a big estuary perch, I’ll need to go and buy another. So if you love throwing jointed lures around for larger species, you’ll love using the 70mm Jointed Claw – a small, compact glidebait that, put simply, catches fish.