Jigging has been around for such a long time and its popularity seems to come and go, but no one can question its effectiveness. In the right hands a jig can be one of the most enticing bits of your fishing kit, and for those who are persistent enough there are not too many predators of the oceans that won’t be tempted by a shiny bit of metal. The challenge is usually opting to jig, rather than dropping over another baited hook. As we say, “trust in the jig!”

As my mate Anthony lined up the drift on the plotter and positioned the boat perfectly, the key was turned off and silence descended on the boat. Anticipation was high as we had all the positive signs for another great day’s fishing. We had already boated a few cracking blue-eye trevalla and were just prospecting some new ground. Jigs are great for this type of fishing as they get down fast and anything of interest will eat them. Bait can be a chore on these days when you are just exploring, as by-catch can sometimes hide some target species. I clicked the diminutive Ocea Jigger into free spool and plopped the blue lumo-patterned 150gm Samaki Ribcage jig into the briny. Anthony followed suit, preferring a Stella 5000 and a slightly smaller 100gm Rib Cage. Feathering the spool allows the jig to get down faster, as it doesn’t flutter and goes down straight. I know it doesn’t make sense – go slower to get down faster – so just trust me on this one; it works. 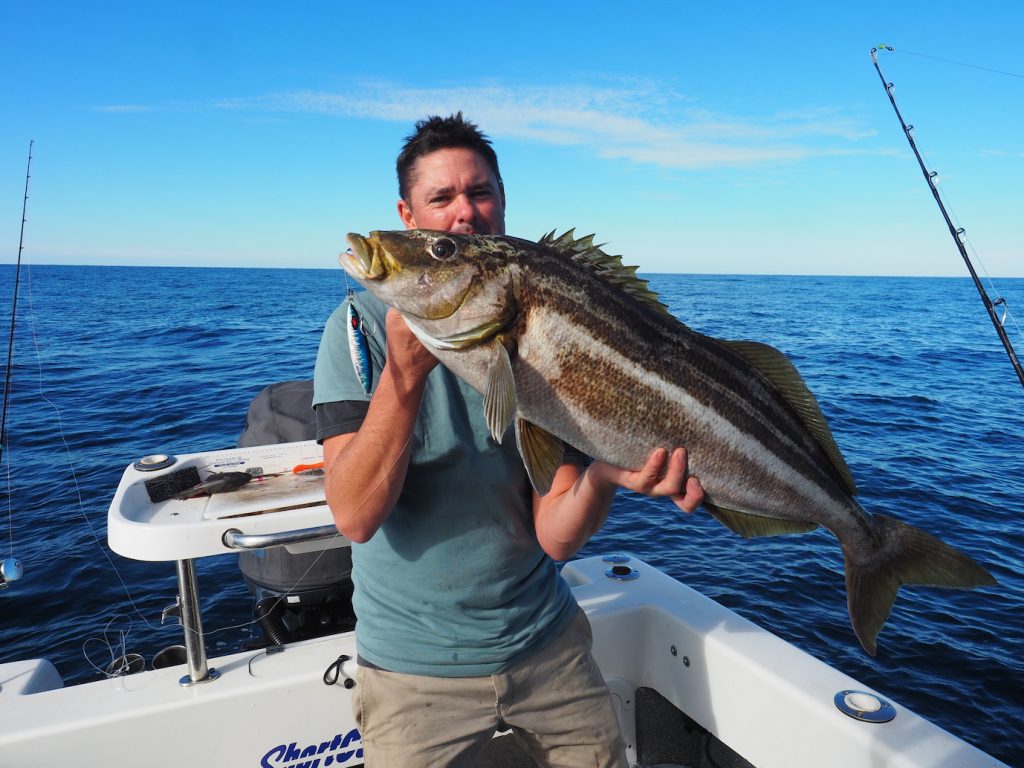 I watched the colours change on the super-thin braid one by one, and as the last colour changed to red, I knew that the tell-tale slack line – “I’m on the bottom” – was close.

“Touch down,” I said to Anthony. “Let’s see if there is anyone home.”

The reel clicked into gear and I started working the little Samaki in a rhythmic slow lift, half wind and long flutter.

My second lift resulted in no touches but as I dropped the rod and allowed the jig to glide downwards the line suddenly went slack. Knowing it was a metre of so off the bottom meant that slack line could be only one thing.

“Yep! I’m on,” I said as I wound tight and struck the fish hard.

The little outfit shuddered and keeled over, and PE2 braid flew off the reel as a healthy fish tried its best to bury me in the structure underneath us. I thumbed the spool in my best effort to slow it down as the drag was already maxed out. A tense stalemate commenced, with neither fish nor me winning. Huge tail thumps and power could be felt through the light tackle and I had my heart in my mouth as the fish got me in the weed and reef, but with brute force and lots of luck it came free. We called the fish for a solid snapper and I commenced a slow battle to the surface over 10 minutes. A glimpse of colour signified that this was no big red, with a touch of yellow and brown flashing through the clear water.

The little assist hook was pinned perfectly and the brand-new Ribcage jig flashed in the sun.

Anthony grabbed the little gaff and lipped gaffed the fish into the boat – 15kg of the most delicious Tasmanian trumpeter was photographed and dispatched to the ice-filled fish bag. If there is a better eating fish in the ocean, I haven’t found it. Happy days! 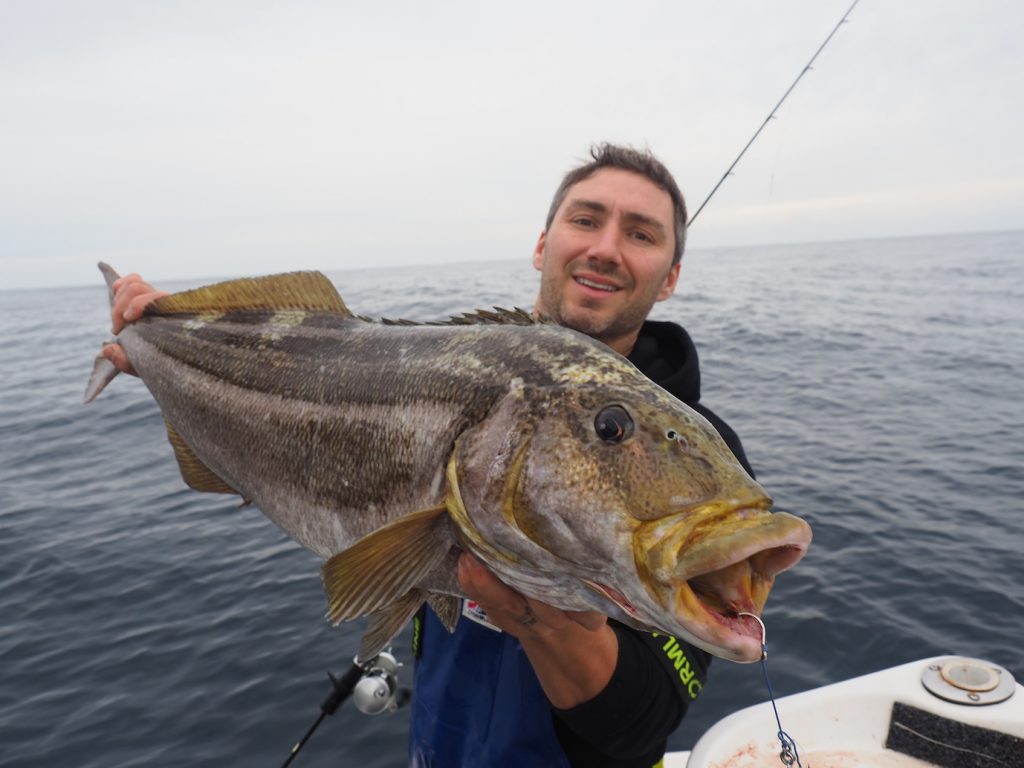 I was asked to test some of the newly released Samaki ribcage jigs, and upon receiving them I was immediately drawn to the lustrous metal “ribs” on one side of the jig. The paintwork is 10 out of 10, with some really appealing schemes. I prefer natural patterns and lumo, and Samaki offers all these in the range. The jigs don’t just look awesome on the wall of your tackle shop, they look even better in the water.

The ribs work to trap water flow and cause the jig to flutter and roll as it is worked up and down in the water. Imagine cupping your hand in water, rather than having it flat. The shiny “ribs” also work to catch light and add extra attraction to your jig. The jig is also offered in some really useful weights for all mid and shallow-water predators and I’d certainly suggest you buy two jigs at a time. The day you lose your favourite jig to a pesky barracouta, you’ll be glad you had another in the box ready to go.

Why I really liked these new jigs in particular is that I firmly believe they need to have a very erratic and substantial flutter on the fall.

So far, these new Samaki jigs have more zig-zag than any I have used before and just increase your chances of tricking a fish into inhaling one.

Snapper, ling, ocean perch, trumpeter, kings, trevally and big offshore flathead have all fallen for a slow jig and it’s really a lottery of what you might catch. Generally they all taste great and fight even better. 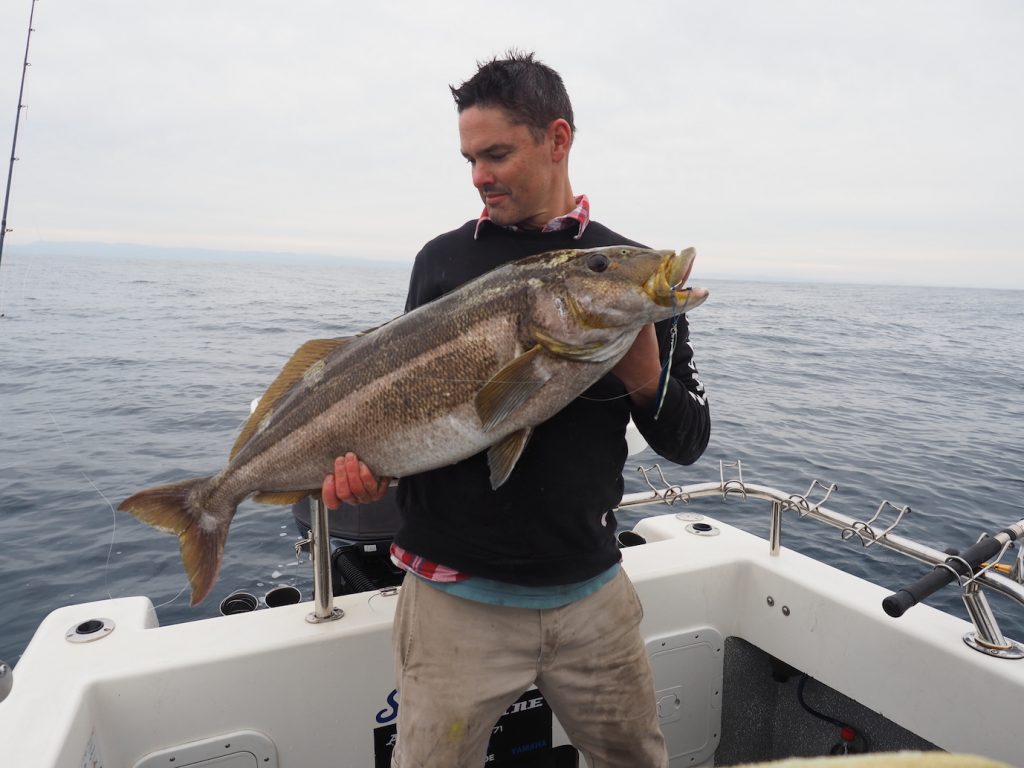 Just type “slow jig” into YouTube and you will be in for hours and hours of expert tuition on all methods of jigging, so I will not profess to be an expert. What I have found works over the years is a very slow lift and wind, giving the jig ample opportunity to flutter and glide up and down. Ripping it up then bombing it down might be effective for kingfish, but for the demersal species we chase it is not effective. Surprising we don’t seem to lose many to snags, so don’t be shy of hitting the bottom and make sure the jig is worked right in the depth you are targeting your fish. In summary, if you are going to try this one day, you can use most tackle – just keep it light. Next time you are in your local tackle shop, grab a couple in a few different sizes and colours and have a go. With snapper season not too far away it’s a good time of year to hone your skills and get jigging.