The Tackle House Rolling bait is a lure that came into my hands recently and immediately caught my eye. The finish and appearance of these lures is like no other, so much so that I had confidence in them before I’d even started using them. I just had a feeling that I had a great lure in my hands and following my experience with the Rolling Baits, my first impressions were confirmed.

The first lure of the pair that I used was the Tackle House Rolling Bait. The Tackle Housing Rolling Bait is a sinking lure that has a plastic bib situated on the back of the lure. The Rolling Bait, as the name suggests has a ‘rolling’ action, instead of the traditional ‘vibe’ seen on most lures. However, it wasn’t until I started using the lure and swimming it, that I actually realised how much this lure rolls and the versatility of its action. The lure swings side to side with a horizontal swimming action that is almost incomparable to any other lure on the market. The second of the lures was the Tackle House Lipless Rolling bait. Essentially, the Tackle House Lipless Rolling bait is just that. It is the same as the original Rolling Bait without the plastic bib, however, it has an equally unique action, or lack thereof. In my opinion, the lipless rolling bait has a very subtle action that mimics more of a sinking stick bait than a vibe. The subtlety of the action seems to give the lure an irresistible appearance on the drop.

Additionally, these lures come with some small, sticky treble hooks, that are so sharp they could pin the fish if it smelt it. However, being such a fine gauge sticky hook, the hooks tend to bend after a few fish, but that’s to be expected, especially when pulling fishing away from structure.

Both lures are ideal for targeting your typical estuary species such as flathead, bream, estuary perch and salmon along with a number of freshwater species such as redfin or trout. However, these lures appealed to me the most as a bream lures and that was the application I decided to use them in. These small lures offer incredible casting distance with their small profile and aerodynamic design. Combine these design features with a lure weight of 4.5 grams (for both models), and they cast incredibly well. The solid lure weight also allows for more accurate casts, ensuring your lure lands closer to the intended target.

How I used it
After tying on these lures for the first time, I decided to flick them around the boat for a few minutes, to work out the actions of the two different models.  I predominantly found myself fishing the Lipless Rolling Bait as a stickbait fished alongside vertical structure. Making an accurate cast towards a jetty pylon, pontoon or boat hull and letting it glide down on a relatively tight line, while watching for any hits or ‘ticks’ on the line. I then let the lure sit on the bottom for around a 10-20 second period and then proceeded to wind up the slack and give the rod tip some short shakes to allow the lure to just slightly hop up off the bottom. I found this technique to be the most effective especially targeting fish sitting high in the water column with this lure mimicking a baitfish or shrimp. Contrastingly, I used the original Rolling Bait as more of a traditional ‘vibe’, in deeper water targeting schooled up fish. Having located fish on my sounder, I used my electric motor to position myself just behind the school. Casting into the fish, I again let the lure sink on a relatively tight line watching for any ‘ticks’ in the line or hits and then let the lure sit on the bottom for 5-10 seconds. I had great success working the lure in two different styles. Firstly, keeping my rod tip low and incorporating a series of 3 to 5 short twitches which seemed to really get the Rolling Bait to roll from side to side quite erratically. I also had success working the lure with a low draw of the fishing rod. The pace to which I lifted the fishing rod up, impacted on how quickly or slowly the lure would roll from side to side. However, I found that a long, slow draw was most effective technique. 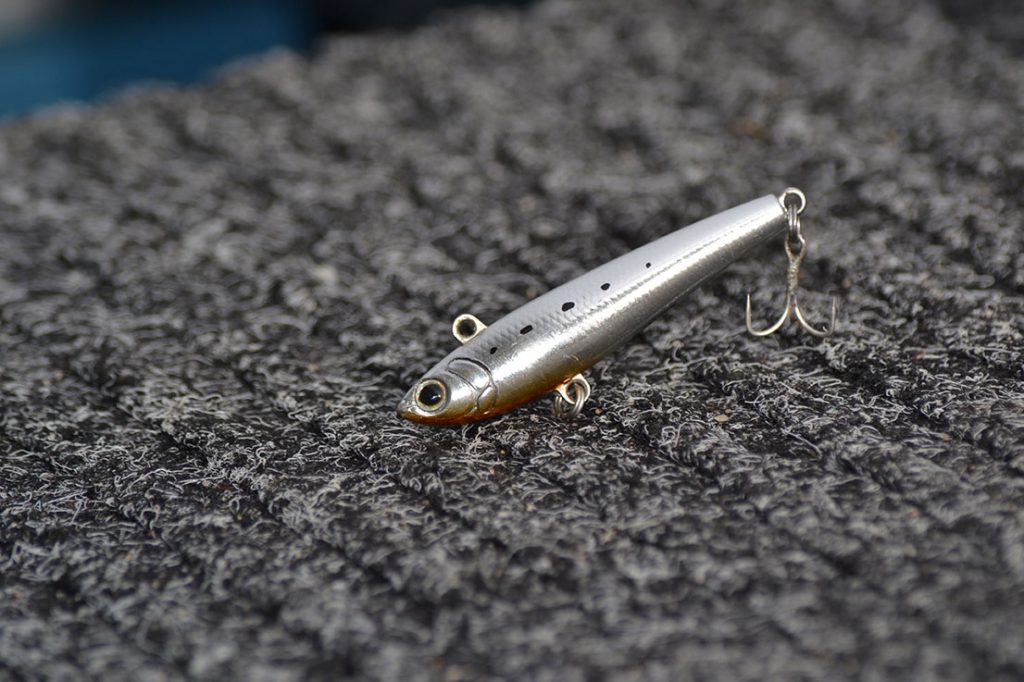 Conclusion
The Tackle House Rolling Bait may just look like your traditional ‘vibe’ style lure, but they proved to be anything but. The unique actions of both models appeal to me as a point of difference among many other sinking bream and estuary lures on the market. If you find yourself struggling to crack the bream code, whether that be on weedy edges, deep holes in rivers or shallow flats the Tackle House Rolling Bait is a versatile lure that just cracks the code and can turn a ‘donut’ into a cracking session. If you are an angler that seeks great versatility in a lure or simply just a lure that catches fish, I strongly recommend adding the Tackle House Rolling Bait’s into your lure collection. Tackle House is a premium Japanese brand so they’re not a cheap lure at around $25, but they’re worth every cent.