Land-based rods – or what are often known as surf rods – can often be all placed into one broad category. More often than not quality blanks, componentry and specific actions aren’t defining purchase decisions – length, rating and price are the primary focus. While this isn’t necessarily a bad thing, there is more to it. For those who are predominantly land-based anglers, or those like myself who thoroughly enjoy it but have only a few sessions from shore each season, it’s well worth investing in a quality rod. 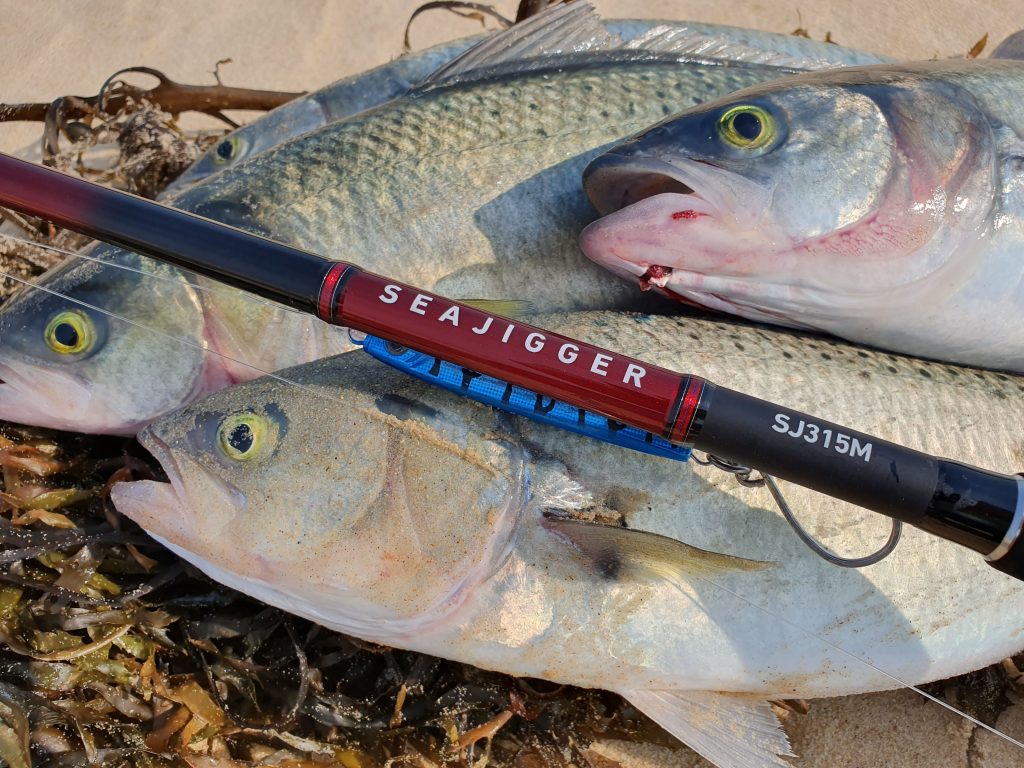 Since 2009 I have owned Daiwa Seajiggers. When I bought my first, Daiwa had a few amazing surf rods out that were fairly new to the market. They had fast actions, could cast heavy weights, had minimalist design but also had flair. Heat shrink took the place of thick EVA and they had modern checks and cool features such as locking rings on the reel seat. The models also had memorable names such as Saltiga and Ballistic – and they were expensive. The price, however, was justified and as I progressed in my surf and rock fishing, I started yearning for features that my cheaper surf rods just didn’t have and the Seajigger range did. So I splashed out and bought a Seajigger 325H, largely for targeting mulloway and gummy sharks in the surf and I’ve had multiple models of all three series since then. What I love about them is simply the design principles. Good design is what separates really great rods from just average rods with expensive guides, graphics and price tags. It’s not just about adding the latest guide design from Fuji or even using an expensive blank; it’s how the blank is chosen for its intended purpose, what size guides are used, how they are laid out on the blank and how well the rod length suits the intended fishing style. It’s also about where the reel seat sits, butt length and grip positioning. The Seajigger range has always done an outstanding job of getting all this right and I’ve found them to be a versatile rod with finesse and durability. 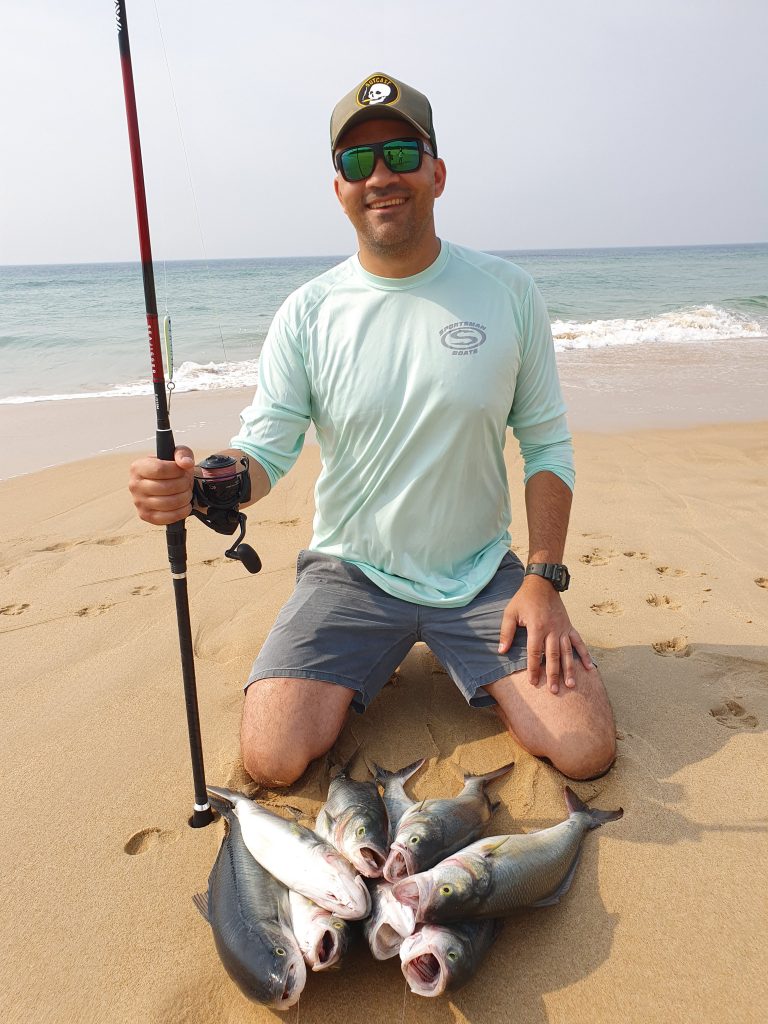 I paired the 315M with a Daiwa TD Black 4000 spooled with 20lb J Braid 4, which is a great pairing. However, the rod definitely deserved something a little more high-end. The new 19 series has significant design and performance features over its predecessor, whereas the six-year gap between the two previous series wasn’t as significant. Fortunately, I owned the previous 2015 325M so I can compare apples with apples. First off, I’m glad they’ve gone back to the red colour scheme of the 2009 series. The blue was cool, but the red and black just looks better and to me this should be the Seajigger signature colour. They’ve replaced the heat shrink covering of the lower butt with thin leather-like Winn grip, which is more comfortable, offers better grip, looks better and doesn’t retain bait odour as easily. 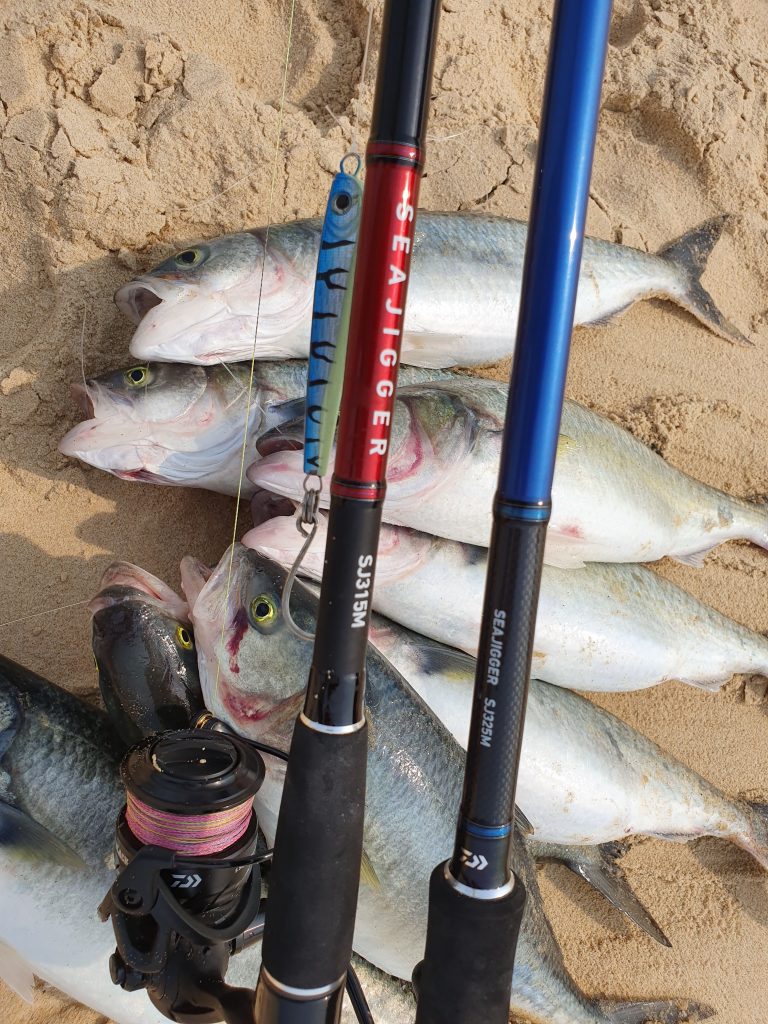 The blank is 3in shorter and notably faster, which makes for a better hook-set and superior casting distance and accuracy with less effort. Through the test period I was casting 60 to 80-gram slugs with ease, which is the perfect weight within its recommended 30-100g range, but it will easily handle 30g or 100g lures.  Large Australian salmon were the target species and that is what this rod is perfect for, casting slugs, jigs, stickbaits and poppers at salmon, tailor, bonito and even any of the mackerel species. The new HVF carbon blank with X45 wrapping makes for a more sensitive and crisper rod and this performance is further enhanced by the new Fuji LKW guides, which are lighter, double-footed and a lower-profile tangle-free guide.

The 315M feels more powerful in the fight, and it’s not just the slightly shorter length that provides this sensation; the blank is more powerful and loads more evenly, allowing you to control the fish fighting underarm without needing to rest the butt on your hip. If you do tangle with larger fish, the new model features a soft rubber butt cap, which is more comfortable and more durable than the EVA featured on the previous model. 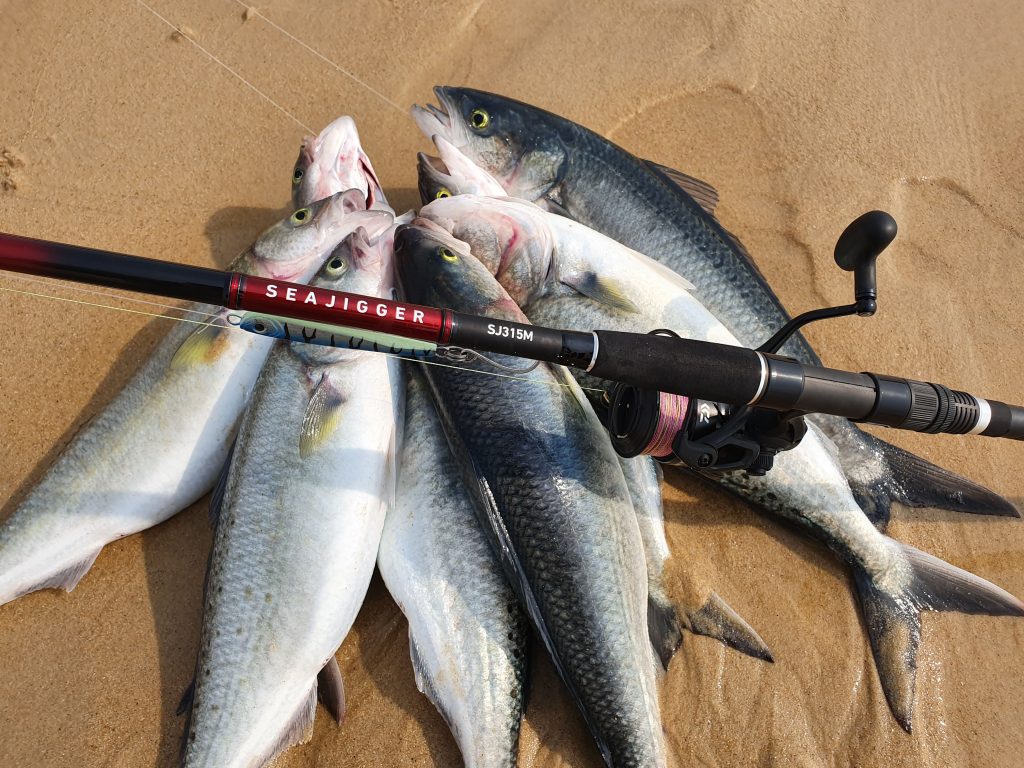 I’ve been a fan of these rods for years and my enthusiasm for the range hasn’t waned. It’s the surf rod series I recommend to anyone who asks and I’m stoked there is now an extra-heavy model in the range. Unfortunately, I lost all my three Seajiggers two days after the photos in this review were taken. The review was conducted at Mallacoota two days before the New Year’s Eve fires and the rods were left in the house we quickly abandoned to escape the coming blaze; the house and fishing gear perished. So if you do buy a Seajigger, head to East Gippsland and fish the miles of amazing surf on offer and inject some money back into these towns; they need it.