Several species of flathead inhabit coastal lakes and rivers right around the country, with the largest of the bunch, the dusky flathead, being the most widely distributed, from Victoria’s Gippsland Lakes, right along NSW and up towards Townsville in Queensland. With a potential to grow beyond a metre and up to 12 kilos or more, it’s no wonder the dusky is generally regarded as the highest in flathead ranks.

I’ve caught dusky flathead from Bemm River in Victoria up to Mackay in Queensland, with a PB of exactly a metre and roughly 10 kilos. Like many anglers I rate these great fish as a culinary delicacy – in fact, my favourite of all fish on the dinner plate. 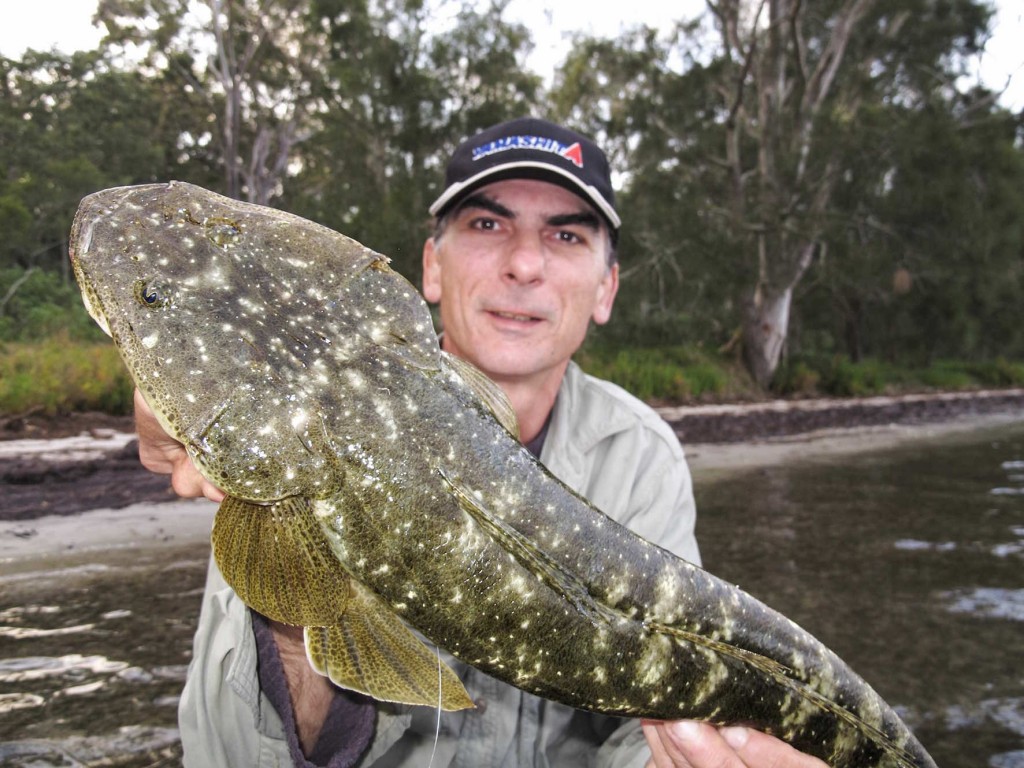 The majority of flathead species found in our waters share the same feeding habits and therefore respond to the same angling techniques, baits, lures and flies. So the tips and techniques outlined in this article can be applied or adjusted to suit flathead anywhere around Australia.

Although most flathead tend to be a bit less location-specific than fish such as mangrove jack, mulloway and mullet, they do favour certain places where food supply, safety and comfort levels are to their liking. So a particular type of spot or structure that flathead like in one waterway can usually be found in other locations. Therefore, concentrating one’s efforts around such places will lead to more success with flathead then simply hoping for the best or taking what comes. 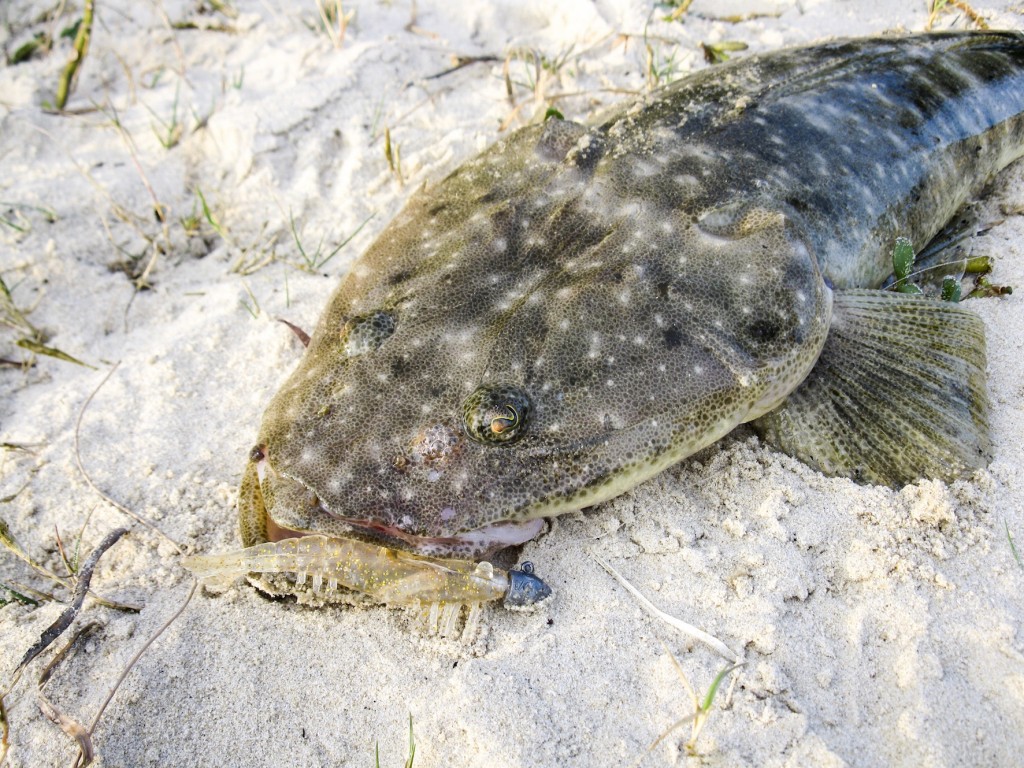 THE MOUTH
The downstream section of an estuary, towards the mouth where it meets the sea, is where the majority of fish tend to be found through the warmer months. In some waterways, particularly in northern regions, the mouth may house fish year-round.

Most forms of structure that attract other fish also appeal to flathead in the lower reaches. This means anything from jetties, boat moorings and oyster leases through to natural features such as channel drop-offs, rocky points or weedy edges. One of the biggest differences between this part of a system and upstream areas or lagoons is stronger current.

Generally, the stronger the current, the more fish will be found concentrated in smaller patches, rather than spread around. This is largely because eddies, calmer pockets and potential ambush points provide shelter for baitfish, prawns and squid, so they’re not at the mercy of the main current flow. Flathead and other predators naturally take advantage of this and will be found in the vicinity of these food-rich pockets.

So when looking for spots to try for flathead, firstly take note of structure in broader terms and then focus in on any smaller eddies or calm spots adjacent to the main flow. The lee side of a concrete bridge pylon or rocky outcrop is pretty obvious, but the more you look, the more you’ll find. Bear in mind too, that fish may also sit just in front of structure so they get first pick of any prey coming down with the current.
The lower reaches of many estuaries also cop a lot of boat traffic, from anglers, day trippers or even in some cases larger vessels such as ferries or ships. Of course, this may affect how we’re able to fish and the behaviour of flathead. Over the years, I’ve spent many hours fishing Sydney’s Botany Bay, as well as plenty of other busy places, including noisy rail bridges. Overall, noise and commotion don’t seem to bother flathead as much as other species, but it’s still preferable to fish somewhere quieter.

RIVER ROCKWALLS
Commonly found along the lower sections and particularly towards the mouth of many estuaries, manmade rockwalls are an excellent form of structure for flathead. The walls along the big rivers of northern NSW and southern Queensland are renowned for XOS crocs, as well as lots of smaller flatties. But any rockwall in any waterway is worth a look.

Once again, current plays a big part and it’s stronger in the big rivers. When tides are biggest, often around the new or full moon, the flow can be extremely powerful so fishing is best left for the hour or so around the top or bottom of the tide cycle – or other parts of the river may be easier to fish.

Aside from that, tidal flow is all part of the game when fishing along rockwalls. A number of techniques work well, with the main emphasis being on presenting baits or lures close to the edge of the wall where rock meets sand. Depending on the nature of the bottom, a few fish may be found further out from the rocks, but most, including the bigger flathead, like to tuck in close where they can ambush prey. 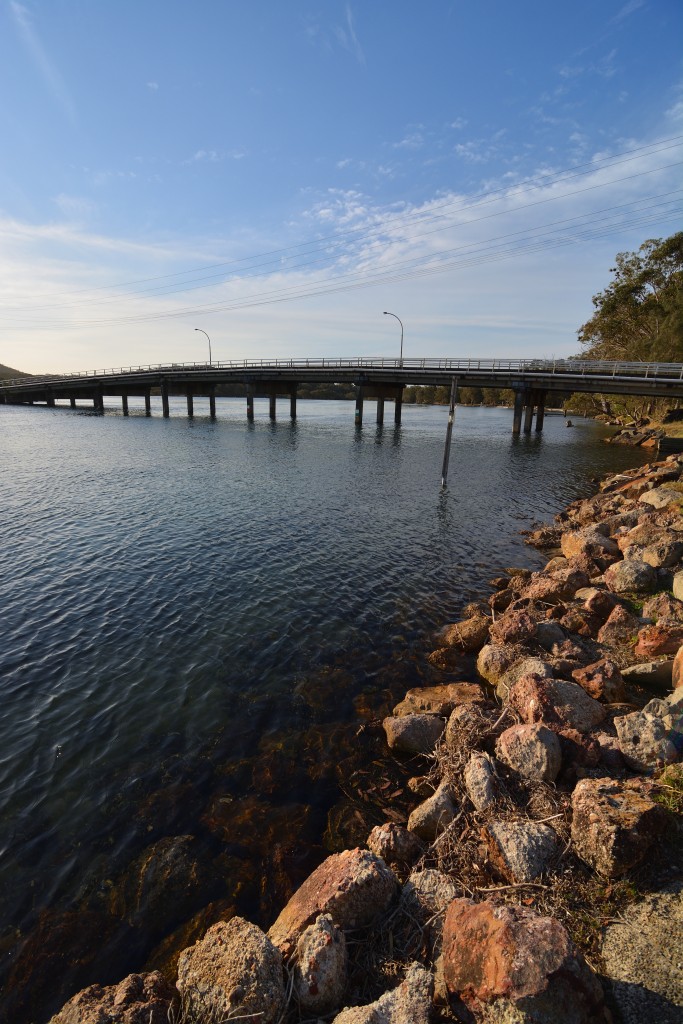 Fish may also be scattered along the entire length of the wall, but any noticeable deviation, point or sharp bend is worthy of closer investigation. In larger or deeper rivers, mulloway also gravitate towards deeper bends or prominent points and they’ll respond to pretty much the same techniques as flathead, with slightly more emphasis on larger soft plastics or live baits.

When fishing from the shore or anchored in a boat it’s best to pick one main area adjacent to the aforementioned features. Lure casters fishing from a boat or kayak who prefer a more mobile approach should try drifting at exactly the same speed as the current, keeping the vessel within comfortable casting distance of the rocks. This way you’re going with the flow, rather than battling against the current with sagging lines or lures being dragged away from the strike zone. It’s easier said than done, but becomes easier with practice. Once this drift and cast technique is under control your results will increase.

As for lures, suitably weighted soft plastics are definitely the best as they get down to the bottom and are less snag-prone than vibes or hard-bodied lures fitted with trebles. The deeper the water or faster the current, the heavier the jig head or plastic needs to be, otherwise it will be pushed around in the flow and won’t attract the attention of fish. 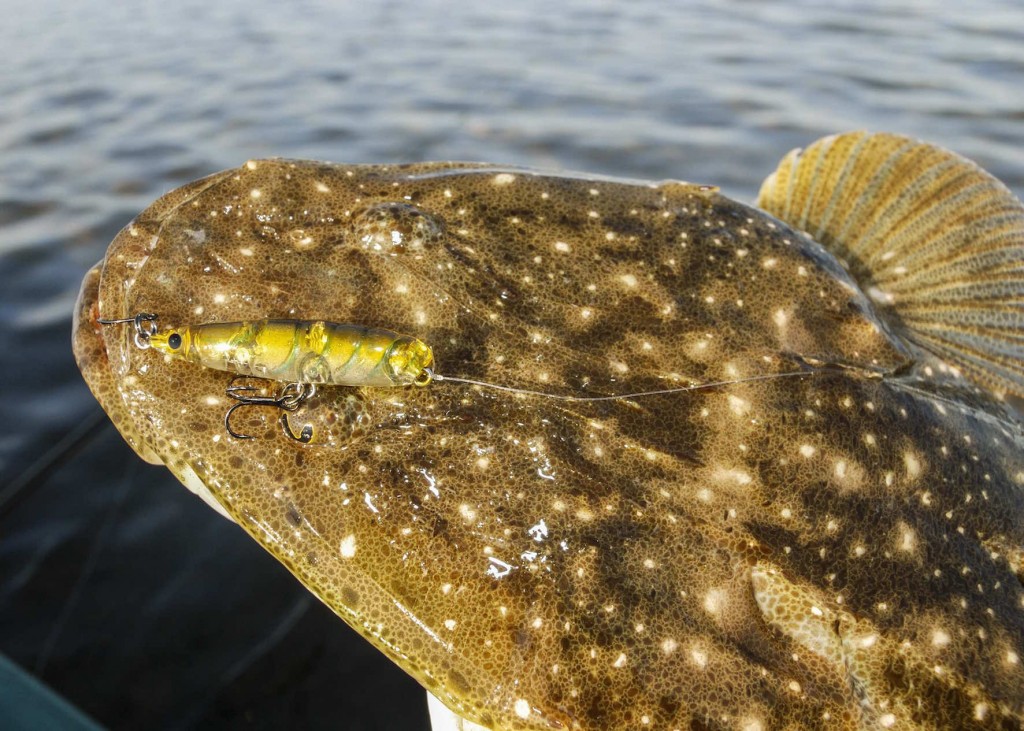 ROCKY POINTS
Prominent rocky points or outcrops are natural fish-attracting features in any sort of waterway. Even with the absence of much tidal flow, in lakes for example, most species of fish still gravitate towards points. Rocks promote weed growth and provide a stable home for all manner of creatures including oysters, mussels, crabs, prawns and shrimp. Around most points there is usually some sort of small bay or protected shallows where baitfish can take refuge from predators or foul weather. Much like those long man-made rockwalls, a rocky point is always worth investigating.

During low light or through the night, it’s not uncommon for flathead to make their way up into those shallows looking for baitfish or prawns. In this case, a lightly weighted bait or shallow-running hard-bodied lure may work well, with less chance of snagging up on rocks or being caught up in weed than a heavier bait or sinking lure.

It’s often easier and more productive though to work the deeper water around the point with a sinking soft plastic, vibe, diving hard-body or bait. Simply casting out in the one spot may result in a fish or two, but being mobile and thoroughly working around the point, one cast at a time, is more likely to produce better results and possibly a bigger fish.

In my home waters of Lake Macquarie I’ve enjoyed great results by persistently casting 100 to 150mm-long soft plastic stickbaits within 50 metres of the end of such points. Sometimes it may take a lot of casts, but being thorough about things often results in a few solid flathead.

ULTRA SHALLOWS
At the opposite end of the spectrum are shallow flats. They come in many forms, from vast sandy flats that are fully exposed at low tide through to weedy flats in non-tidal lakes that are permanently covered with water.

The first tip here is to try and pick a flat with some extra features, rather than lots of clean, bare sand. The extra features could be patches of weed, scattered rocks, pink nipper or soldier crab colonies, fallen timber or dead trees. The more features, the more flathead are likely to be present and ready to pounce on a lure or bait. 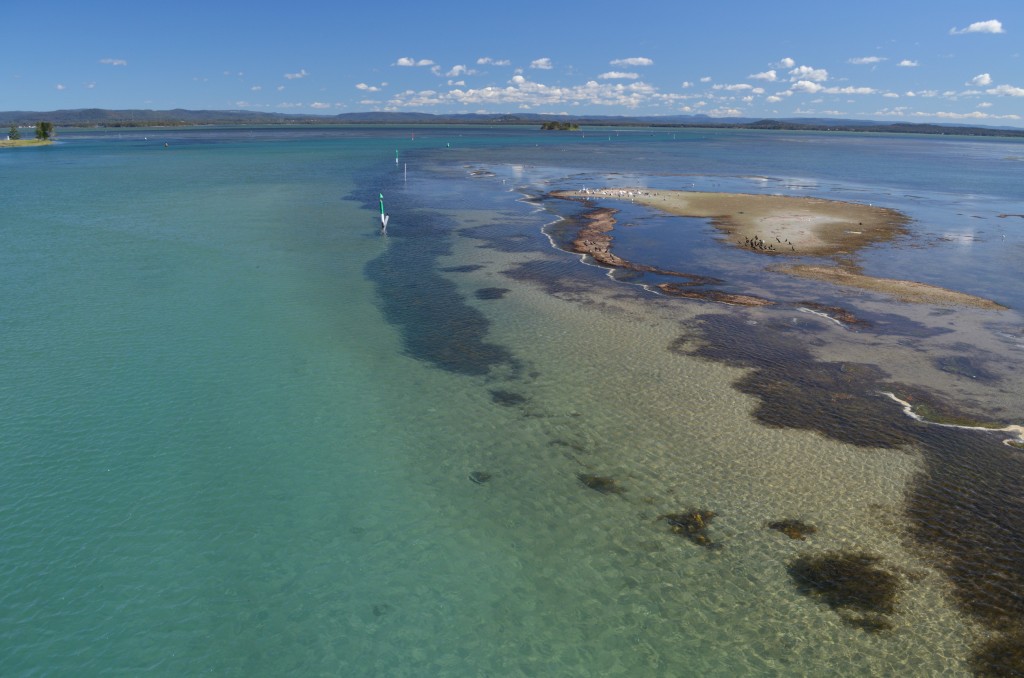 Secondly, don’t be afraid to cast right up into spots that look too shallow. Even 5cm of water may still be enough for a flathead to lie in, waiting to snatch a bite to eat. One of my local flathead spots is a large area with only 4cm to 15cm of water, which becomes partially exposed at times. It’s so shallow that surface lures are the best option – and even a surface lure that sits vertically in the water often fouls up with little bits of weed as it touches the bottom during the retrieve. So here I’ve found models that are either really small or sit more horizontally on the water are the better lures to use. Needless to say, it’s also fun to see the water explode as a flatty smashes a surface lure!

UNDER LIGHTS
One of my all-time favourite flathead arenas is under illuminated bridges, jetties and boat ramps at night. I learnt decades ago, as a kid fishing at a local bridge, how flathead like to congregate in the shallower water that was lit up, directly under or close to overhead lighting.

It’s a simple theory, just the same as the way moths and other insects are attracted to the backyard light at night. In the water, shrimp, prawns, baitfish and squid are attracted to the light and predatory fish such as flathead move in to take advantage of the smorgasbord.
Once again, I can thoroughly recommend soft plastics bounced slowly through the light spots and can say with confidence that white is about the best colour to use. It’s just about impossible to go wrong with something like a 100mm Squidgy Drop Bear or a similar length Berkley PowerBait Minnow in pearl white or glow white. Other successful lure alternatives include narrow-profile diving hard-bodies and sinking vibes, but it’s pretty hard to beat softies.

Of course, there are many other places around our coastal waterways that can be attractive to flathead and they’re the type of fish that could show up anywhere. By concentrating more on the types of flathead hot spots listed above though, catch rates and fish sizes are sure to increase. 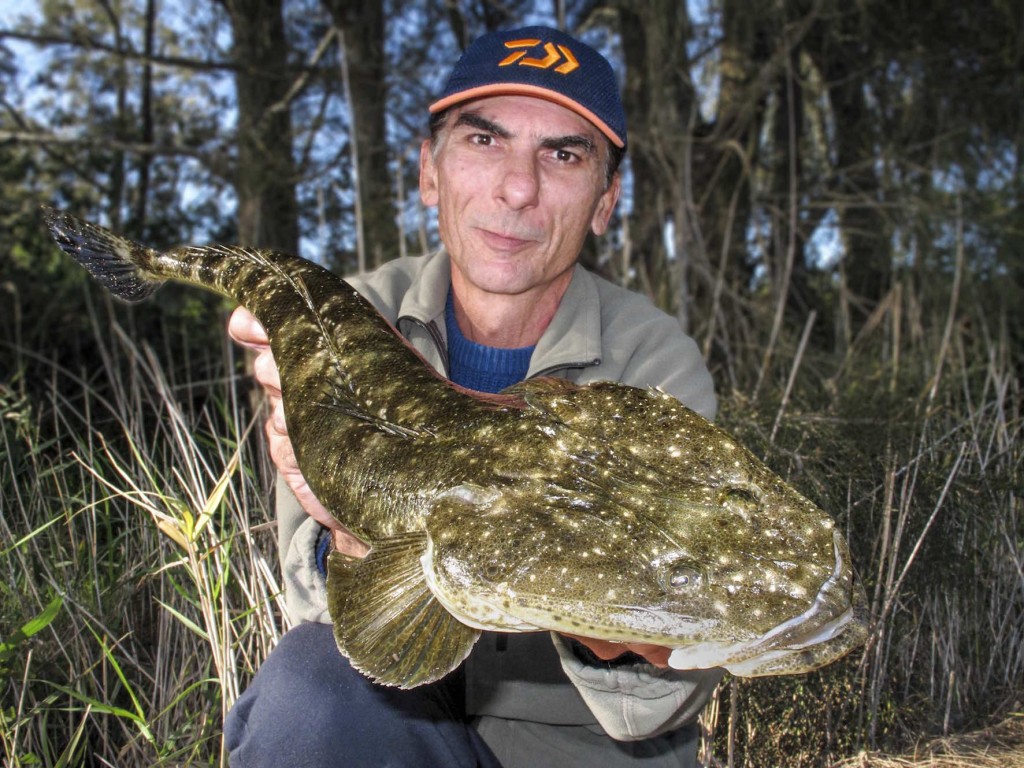