The Argyrosomus Japonicus, what’s that you ask? There are many more common names for this wonderful and most prized sports fish; the ghost of the estuaries, secret silver, jewfish, dusky kob in South Africa and as it is most commonly known to Australian anglers, mulloway, an indigenous word meaning ‘the greatest one’. All of these names indicate how elusive this fish is and why anglers are so keen to catch them. Mulloway are a silvery to bronze-green colored long powerful fish which may grow up to 2m in length with a distinctive lateral line down the flanks of their body. They have large scales, a huge mouth for sucking in their prey and back it up with a large powerful tail which insures that they will put up a great fight all the way to the beach or boat.

WHERE
Mulloway are found all around Australia off ocean beaches and in estuaries, and in the northern parts of Australia they can be found in offshore reefs. The Coorong Lagoon in South Australia is renowned for large numbers of mulloway and is known to be an important nursery area for this species. A lot of large fish are taken off the beaches around the Great Australian Bight.  Mulloway are often found in deep holes in river systems, estuaries, bays, and are also known to inhabit rock walls, river mouths, deep surf gutters and inshore reefs.  Mulloway are known to spend their first 3 to 4 years in estuaries before moving into open waters.  A 46cm mulloway is roughly 3 to 4 years old and at about 75cm they have reached sexual maturity. By 6 years old they can weigh up to 10kg and they are thought to live a maximum of about 30 years. Sea Fishes of Southern Australia (Hutchins and Swainston) lists the largest mulloway caught in Australia as 42.5 kilos. The largest mulloway caught was in South Africa off the beach by John Crabb and weighed a whopping 82kg! With that in mind it’s no wonder that anglers have sleepless nights dreaming about these beautiful monsters. Mulloway can be caught in water as shallow as 1 metre as they often hunt the shallows on the incoming tide for small bait fish, crabs and other crustaceans.
When looking for an ideal location to target mulloway try to remember that these fish are a somewhat lazy fish and will sit just outside of the fast running currents and eddies and pick off the slower weaker school fish. They often like to hang out in the shadows of structures like bridge pylons, rock bars and off shore bommies. If you’re using paddle tails, blades or any kind of plastics, cast upstream of the structure and let your lure float down into the path of a big jewie laying in wait. If you’re fishing a bommie or bridge pylons you can expect the fish to be hanging around the back side of the structure, this is where they will sit waiting in ambush preserving their energy for a fast attack.

BAIT
To capture one of these elusive giants it pays to do your research on their feeding habits. If targeting mulloway fresh bait is always best. If it’s good enough for you to eat its good enough for them to eat. If you can it’s best to catch your bait in the same session or if not make sure you buy the best quality frozen baits you can find.  Mulloway often feed on crabs, crustaceans, mullet and as I have witnessed they can’t resist fresh squid. But generally they are opportunistic predators and will take anything that is available to them.
Smaller mulloway, known as soapies, are often caught by anglers when chasing bream in estuaries as they will take a variety of normal estuary baits such as prawns, nippers, fish fillets or worms.  Larger mulloway are often tempted with live baits such as slimy mackerel, yakkas, mullet, pike or small tailor, although in the surf they are often caught on large beach worms.
The distinctive lateral line that runs down the flanks of their body helps them to pick up on vibrations in the water such as schooling bait fish or wounded prey, so when choosing an artificial bait look for something that has a good vibrating action like a paddle tail or even a vibe lure or a deep diving bibbbed lure with a noisy rattle. 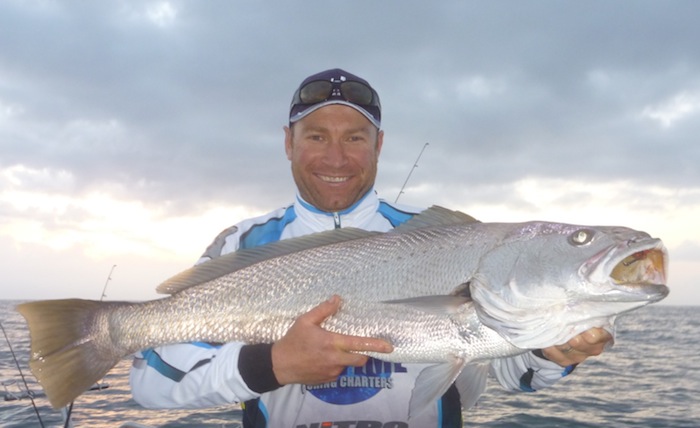 TACKLE
I’m often asked ‘what rod and reel should I buy to go fishing?’ and I always say the same thing, ‘buy the best quality gear that you can afford.’
My choice of rod and reel for targeting mulloway with bait is a 7ft rod rated to 10-15kg in either overhead or spin and a reel to match. The reel should be of a large enough size to hold at least 300m of braid. I always fish 30lb braid as a main line and 60lb fluorocarbon leader to a circle hook. This is running on an easy rig with a dropper, to a tear drop sinker (se pic on page 34). I like to tie a loop in my dropper so I can change the weight of my sinker according to the depth and the speed of the water. Your dropper line should always be of a lighter pound than your main line because if you get your sinker snagged, you will be able to break it free and continue to fight your fish or retrieve your hook and bait.
When fishing soft plastics I use 7ft graphite rod of 3-6kg coupled with a 2500 size reel, braid and a fluorocarbon leader is a must. The breaking strain of line will depend on the size of the plastics that you are casting. Remember that the breaking strain of the line is when the patience of the angler runs out; use your drag for what it was made for. Patience is a virtue.

CAPTURE
Mulloway are known to “mouth” a bait and seem to play with it, especially with live bait, so let them run with the bait for a bit with no pressure before striking. Once you set the hook don’t be surprised when you get a blistering first run and your adrenalin starts pumping hard. The tell tale signs that you have hooked a jew will be the head shakes felt through your line and rod; this is usually about the time the smile starts to appear on your face. When you set the hooks into a mulloway near structure you can be sure of one thing, that they will head straight for that structure to try and bust you off, so be ready to put the hurt on them and try and turn their head quickly.
The reason I have chosen circle hooks as my preferred hook is because mulloway have a very hard bony mouth and a jaw hook up will most likely result in landing that fish all the way to the boat or beach. But when fishing in the surf a gang hook rig with a fresh pilchard or fillet bait can be just as deadly. Once you have set the hooks into a big jew expect a fast blistering run followed by hard head shakes and big tail thumps. As the fight progresses the fish often change direction and sprint off fast and hard, this is when fishermen can easily mistake it for an eagle ray. Don’t be too hasty, take your time and try to relax. Once you have identified your catch as a mulloway take a deep breath and concentrate. When the fish nears the boat and you think you have won the battle be sure not to lift the fishes head out of the water. This would be the same as someone shoving your head under water suddenly, of course you would go nuts just like a fish would. This is the part of the fight where a lot of fish are lost. Be sure to have a quality net and or gaff at hand, unless you’re planning on a boat side release. 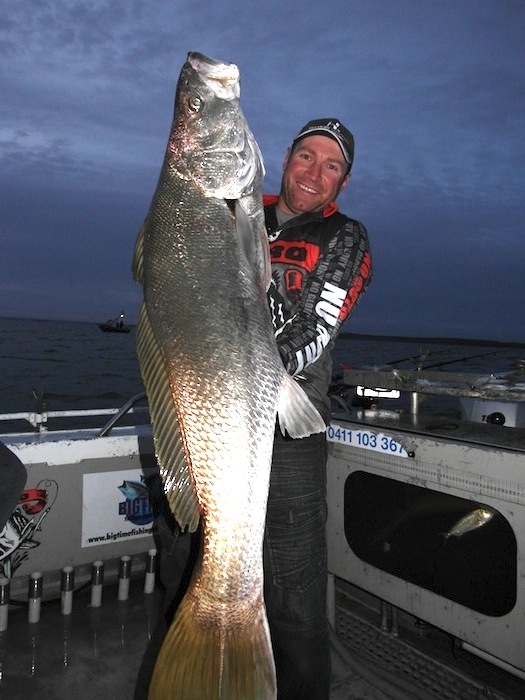 SURF BEACHES
Before fishing a surf beach, stand on higher ground and look up and down the beach for gutters. Gutters are simply deeper areas of water running parallel to the beach along the coastline; this is where you will find the mulloway feeding. To find a gutter, look for deeper, darker water, and areas where breaking waves reform and become flatter and wider.
Before carting all your gear down to your chosen gutter, make sure it is one you can cast into. You don’t necessarily need to cast into the deepest part of the gutter because the fish will often feed throughout and ambush small prey in the wash and the shallows. When fishing for any species off the beach always try to avoid weedy areas as they can be a nightmare in the dark.
If you are fishing in the surf the same applies when landing your fish. Take it easy and don’t rush, use the waves to your advantage and slowly ease your fish in with the breaking wave. For some reason I often relive the moments in my head over and over again where I’ve lost a big fish due to being a bit over excited. Unfortunately those memories never fade, but if you can take a breath and think back to them whilst fighting a big fish you can use that to you advantage.

CARE
Now that you have caught your mulloway be sure to take good care of it. This is in my opinion one of the best eating fish around, so if you’re going to spend lots of time and money on fishing gear and boats etc, why wouldn’t you look after your catch and take home the best flesh you can? I like to take out the guts soon after the fish is dead and the photos have been taken, not just because I want to look after the flesh but also to see what the fish has been feeding on, this can give you an advantage for the rest of your fishing day and for future sessions. The next step is to get your fish on ice as quickly as possible. If you don’t have ice use a wet towel or cloth, keep it in the shade and regularly wet it down. If you’re like me and you like to fillet your fish DO NOT use fresh water to clean your fish, if you’re at home and nowhere near the beach then use a bit of paper towel to wipe down your fillets. I like to vacuum seal my fish before freezing it as it will last a lot longer that way, mulloway generally tend to freeze well anyway.
Whilst you’re filleting, don’t forget to get your jewie jewels out of its head as a reminder of what you have accomplished.