With the continental shelf laying only a few kilometres away from the sand, fishing on the shore side of the Ningaloo Reef is amazing and well worthy of a visit for any keen angler.

When deciding on a title for this article, the idea of “Light tackle sportfishing” came to mind but what is the cut-off for light tackle?

Yes, we use lightweight powerful rods these days but the matching reels have plenty of increased drag pressure. Couple that with 30 to 50lb braid and 60lb leaders and I think we start to step out of the “light tackle” realm. Having said that, the aforementioned gear is probably considered light tackle by most north-west anglers. 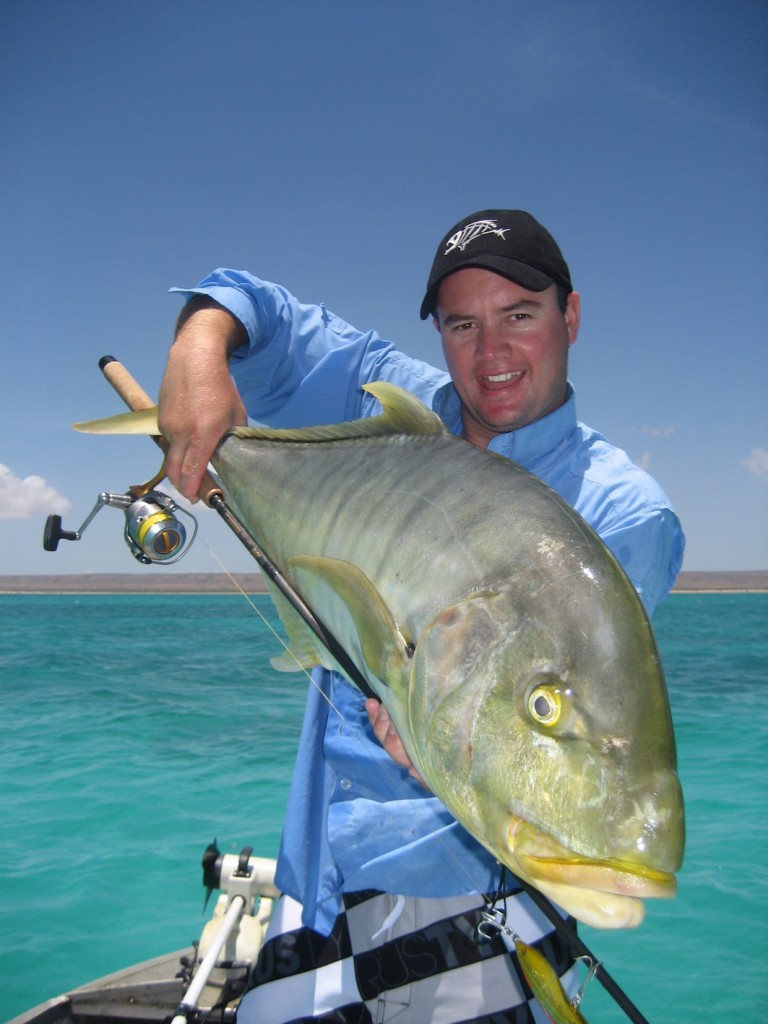 Exmouth is home to some of Australia’s best trailer boat game fishing. The exciting blue marlin fishery is fast turning the area into a heavy tackle haven, with many recent grand slams being posted. In that sense my set-ups for inshore spin fishing at Ningaloo are definitely light tackle but still require some serious stopping power. Most of the fishing scenarios mentioned in this article require the extraction of dirty reef brawlers in waters of about one or two metres deep, surrounded by myriad coral bommies. I recently opened one of my Exmouth storage boxes and came across at least three reels that have now been officially retired. After winding the handles and feeling the drag, the title of “Ningaloo drag burners” sprang to mind as I put the coffee grinders back in the box. Tighten up your drags and invest in some high-quality reels as I explain how to tangle with Ningaloo’s inshore drag burners.

Exmouth and the Ningaloo Reef are located on the north-western tip of Western Australia. Travelling by car from Perth will take about 12 hours or you can fly from Perth to Learmonth Airport in just under two hours. Exmouth is the nearest township to the Ningaloo Reef and is the place to base yourself for a week’s fishing if you want to enjoy a few home comforts. There are plenty of accommodation options including campsites, serviced apartments, holiday houses and five-star resort living at Novotel Ningaloo Resort. In the past 14 years I have stayed at all the above and my top three, in no particular order, would be: 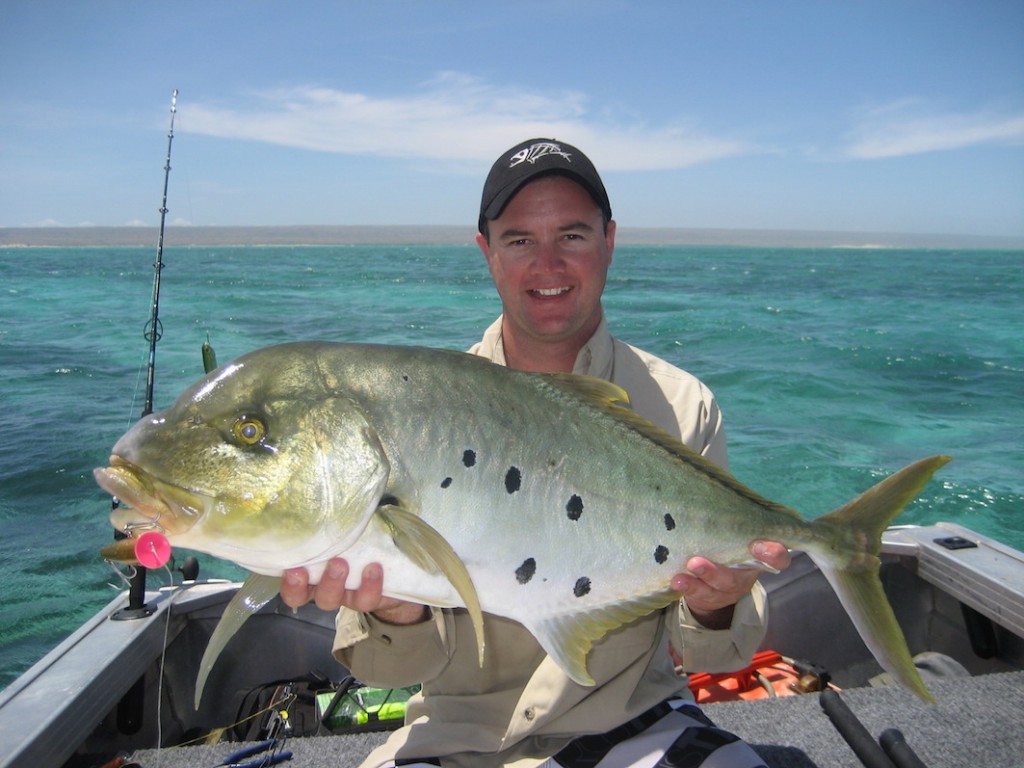 Drag burners. It’s that simple. Everything you catch at Ningaloo fits into this category but the two main culprits I like to chase inside the reef include spangled emperor and golden trevally. These two, along with the odd giant trevally, have been responsible for ending the career of a few reels. These reels had caught a lot of fish over many years but catching spanglies and goldens flat-out on light tackle will test your gear to the limit. Spanglies inside the reef typically range from 1kg to 5kg – the bigger models love poppers and are generally 60cm to 75cm long. Goldens are usually not too far away and roam the inside shallow bays. You can quite often encounter packs of goldens, resulting in multiple hook-ups. Charlie court cod, redthroat emperor, gold-spotted trevally and long toms make up most of the by-catch. 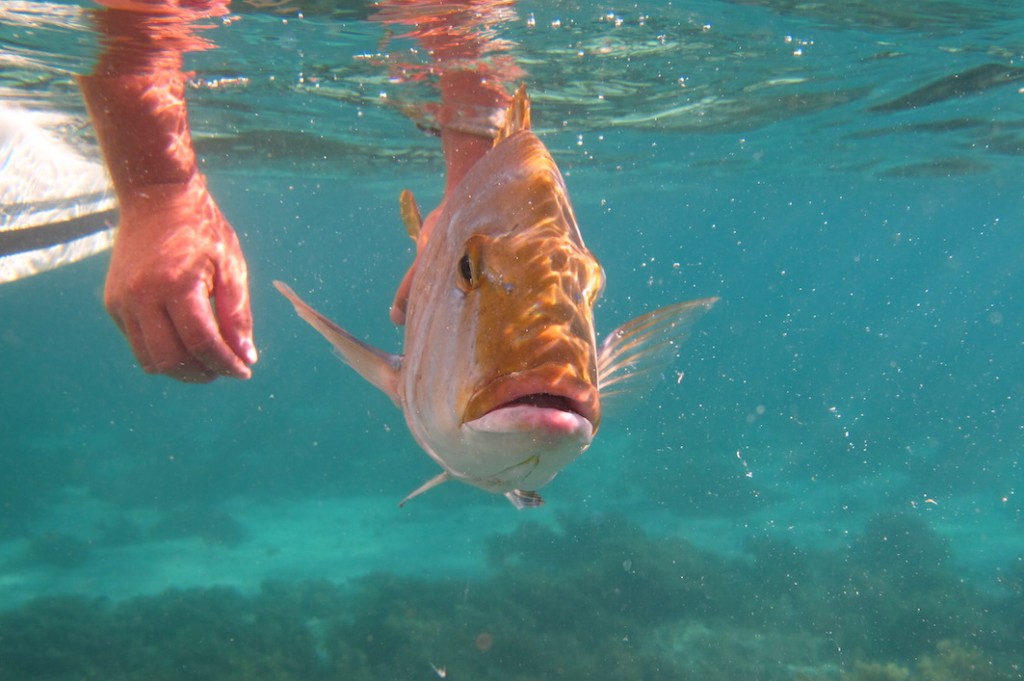 The wind, particularly a south-westerly, can be your best friend at Ningaloo when drift casting the shallow bays. The wind allows you to drift along with your motor off, covering a lot of ground and saving valuable fuel. A nice chop on the water can also help you drift towards a patch of fish without spooking them. The oily calm days can make lure fishing tough, particularly in very shallow gin-clear water. Find a patch of water you want to work and move the boat well upwind of the target spot before you kill the engine. Some drifts along the Ningaloo Reef can last for hundreds of metres. If you find some fish, repeat the same drift or work similar ground to the north or south of your initial drift. Cast with the wind, which will allow for long casts, and your boat will drift over new ground for your lures to work. If you find yourself drifting towards the reef or the breaking Indian Ocean swell, it pays to keep the engine running and someone on the wheel for safety.

Traditionally my go-to rod was the G-Loomis IMX SJR-844 (10-17lb) matched with a 4000-size Shimano spinning reel. Loaded with 30lb Sunline Super PE and 40lb Sunline Fluorocarbon, this was the ideal Ningaloo light-spinning combo. Plenty of spangles, goldens and a 25kg GT have succumbed to this outfit. While still a formidable combo, there are many lighter options available on today’s market with just as much grunt required for a trip to the North-West. Be sure to check out the latest range of Black Hole Magic Eye Torque casting rods or the Hurricane SWII series. Lightweight, powerful and can effortlessly throw lures into orbit all day. If you haven’t tried it yet, check out Sunline’s Super PE in fluoro green – it has increased abrasion resistance compared with other thinner diameter braids, something you need once a big spanglie runs under a ledge or bommie. Tie long leaders, too; you may need to rip out a big spanglie by hand if he snags you up. This is bound to happen if you chase them regularly as they are masters of finding a hidey hole once hooked. We have jumped in on several occasions to pull back a spanglie from underneath a ledge. 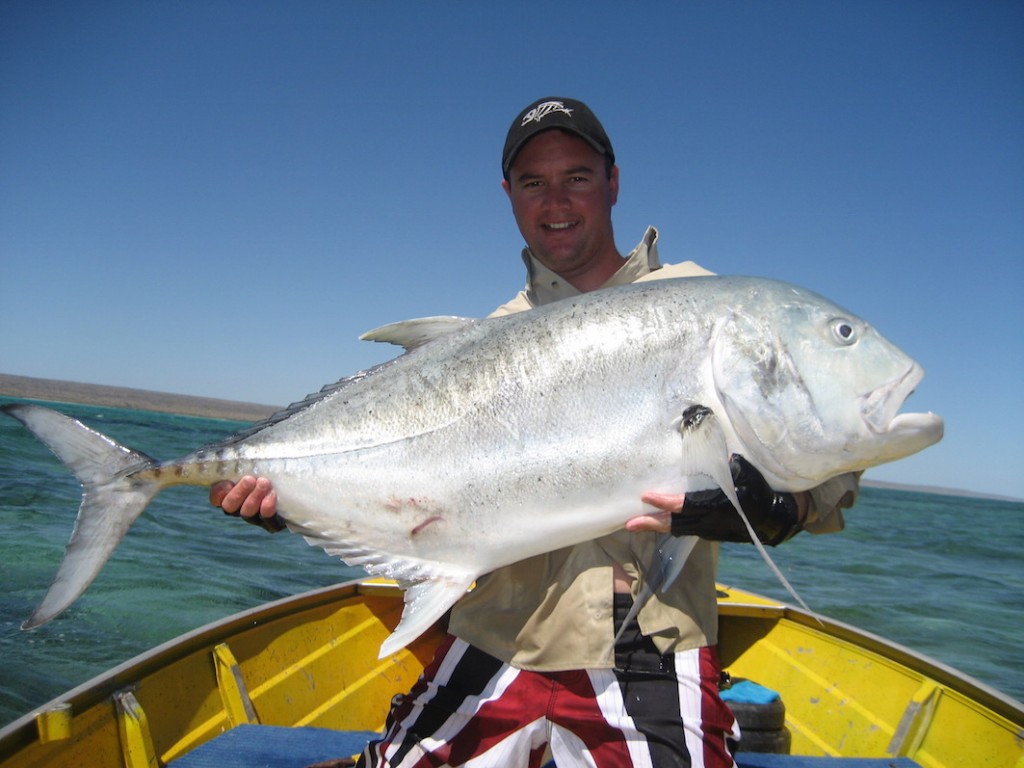 Poppers and surface-walking stick baits so pack plenty of them, about 100 to 110mm long. Big spanglies and goldens love chasing after a medium-pace retrieved popper throwing up a bit of splashing and noise. It is thought spanglies in particular are tricked into thinking lures are small hatched turtles – one of their food sources at certain times of the year – as they give a similar splash heading out for deeper water. Goldens can’t resist the bloop when they come into range of a popper – it’s visual fishing at its best. Try Lucky Craft Sammy, small Maria Loaded, Pop Queen and Halco Roosta poppers. If you find the surface action is a bit slow, try switching to a very shallow sub-surface stick bait or shallow diver. Sometimes a change of pace under the surface can switch on the bite. It always helps to start with a range of lures and depths if you are fishing with two or more anglers to find what they are taking. However, I pretty much always start with a popper – you can’t beat watching them chase your lure and smash it off the surface. The size of fish is generally bigger, too. Maybe only the older and bigger spanglies have the courage to rip a big popper off the surface.

Summer months are hot, really hot – 40C-plus – but the fishing can be spectacular if you can handle the heat. A nice south-westerly breeze can cool things down on the water, though. Large shoals of bait tend to shoal up in the summer months, bringing with them the target predators. Summer also sees an increase in the expanse of weed beds across the Ningaloo Reef system. Spanglies love hiding around weedy patches surrounded by sand holes and goldens can often be seen around floating weed mats. The fishing during winter and spring can still be productive but strong winds can keep you off the water for most of the day, especially in a small boat. 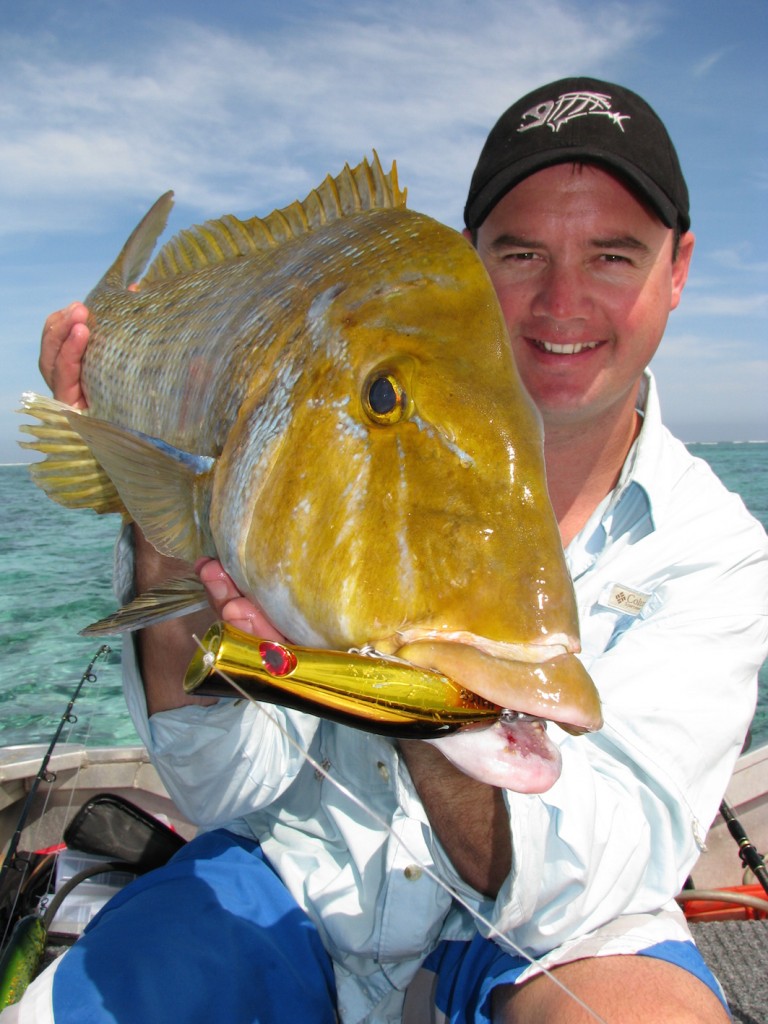 If it’s too windy on the west side of the cape, you can always launch on the gulf side of the cape out from Exmouth and chase more goldens, queenies and tuna. You can use the same tackle and try your luck with some new species and get out of the wind. A northerly is probably the worst wind you can get at Exmouth, which runs down both side of the cape shutting off most of your fishing opportunities. Always keep an eye on the online wind maps – Seabreeze, WillyWeather and BOM. You can plan each day ahead based on the wind direction, choosing to fish either the west side near Ningaloo Reef or Exmouth Gulf. 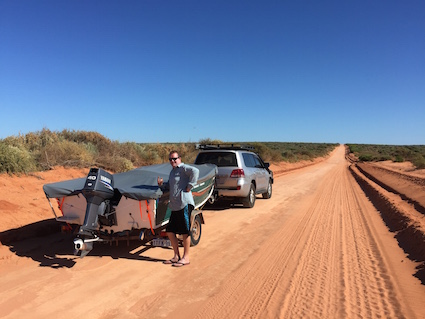